A day of contrasting results

A day of contrasting results 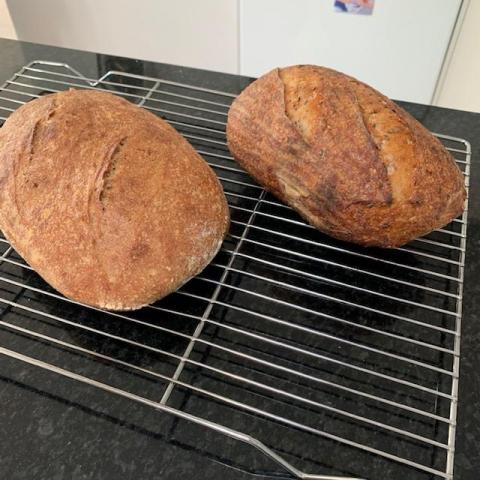 Reading through some of the Baguette CB posts I noticed that alfanso had made Hamelman's Sourdough Seeded Bread and when I was deciding what to make this week I decided to have a go at this.

Tuesday 9 am Dry toasted 23 g sesame seed & 46 g sunflower seed in skillet as I didn't want to heat the oven just for this.

9:30 am Instructions were to mix all ingredients together.  I decided to add the toasted seed mix later during bulk ferment so mixed together all of the soaker + 136 g water + all levain.  This was then added to 294 g flour + 1 g diastatic malt + 31 g rye flour + 8.8 g salt. I felt dough was a little dry so I added 2 tspn water.  I did fewer slap & folds than usual then rested dough for 40 mins.

10:30 am The dough felt really quite strong and Hamelman suggests only 1 fold after an hour and a quarter.  I felt this was too long to wait to incorporate the sesame & sunflower seeds so I gently pulled the dough out as much as it would allow then sprinkled the seed mix over, folded the sides in then folded the dough bottom to middle then top down and left to rest for another 45 minutes.

11:15 am At this point the dough was very strong but I did manage one gentle coil fold to ensure the seed mix was evenly distributed. I left the dough to ferment for 3 more hours.

2:15 pm Shape dough, place in banneton and leave on bench.  At 3:45 pm I had to go out so I popped dough in the fridge until the next morning.  I could see there was some slight increase in volume but it wasn't big during final proof or bulk ferment.

I saw a post by Gavinc who had also made this formula and felt his final proof should have gone longer (if I remember correctly).  This was why I gave the dough a 90 minute bench proof before retarding.

The other bread I made was also a new formula & method for me.  I made fullproofbaking's 50% wholewheat sourdough, and I followed her method as much as I could - it is very different to anything I have done before.

I did a second refresh of my starter Monday night, feeding it 50:50 white:wholewheat flour. Yesterday morning early I built the levain and kept it in the microwave at about 27 deg C until it was ready to use.  Because I don't trust the flour here in NZ to perform well with an extended autolyse, I only did a 2 hour rather than 4 hour autolyse for the wholewheat portion.  It was really wet.  The white flour had its own autolyse and once again I shortened it to just 1 hour.

Once the levain was ready, I added the starter to each autolyse and mixed for several minutes.  In the end I gave the white flour dough 50 SLAFs and the wholewheat I mixed with a spoon as it was too wet and showed very little evidence of gluten development.  After resting for 45 minutes, I added salt to each dough and mixed again as before.  The doughs were rested another 45 minutes and then combined by way of lamination.  The combined dough was soft but seemed ok. 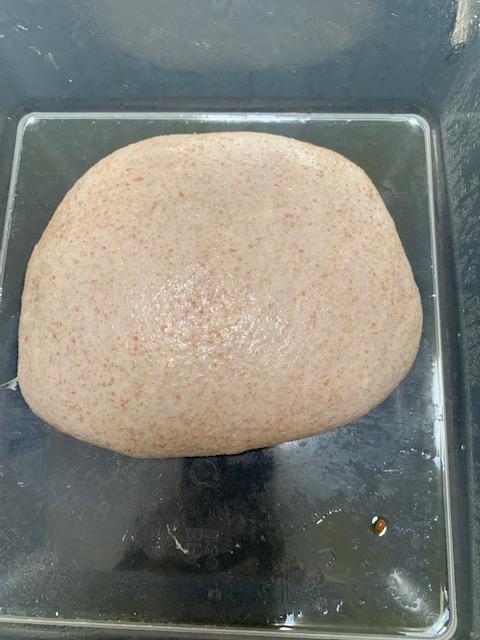 I managed another 3 sets of coil folds then left dough to ferment.  Instructions said 2 hours so I thought sweet! I have to go out but should be back in time.  Room temperature (and dough temperature) were lower than fullproofbaking"s so I thought all will be well.

Oh dear, I came home to pancake.  It was close to the indicated time and dough had spread and puffed up a bit so I shaped as well as I could and put it in the fridge to retard overnight.

This morning I baked both loaves in DO at 250 deg C for 15 minutes, lid off and another 15 minutes at 230 deg C.  The 50% wholewheat loaf was done so I removed it from the oven but had to put the Seeded sourdough loaf back for another 10 minutes until internal temperature was 205 deg F.

Seeded sourdough - the back loaf in the lead photo 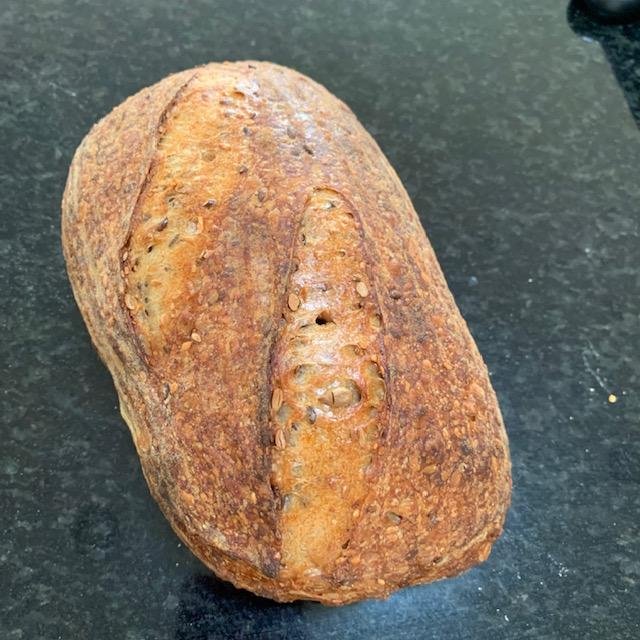 Here is the crumb 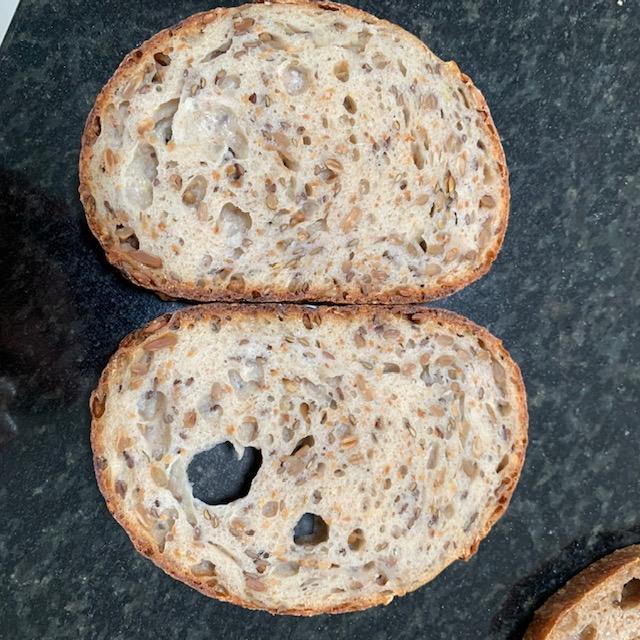 I think it could have done with a bit more on the bench before retarding but whilst firm it isn't actually too dense.  The addition of the diastatic malt (thank you Albacore!) has meant I finally have some decent caramelisation of the crust!! The taste is really good so I will make this again, possibly adding a bit more water given how strong this dough was.  I wonder if an autolyse would have made this more extensible 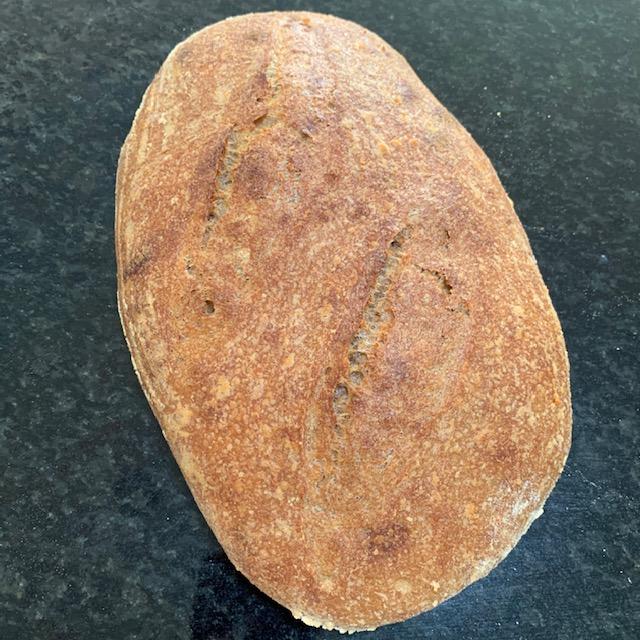 It's pretty flat! Quite disappointed. 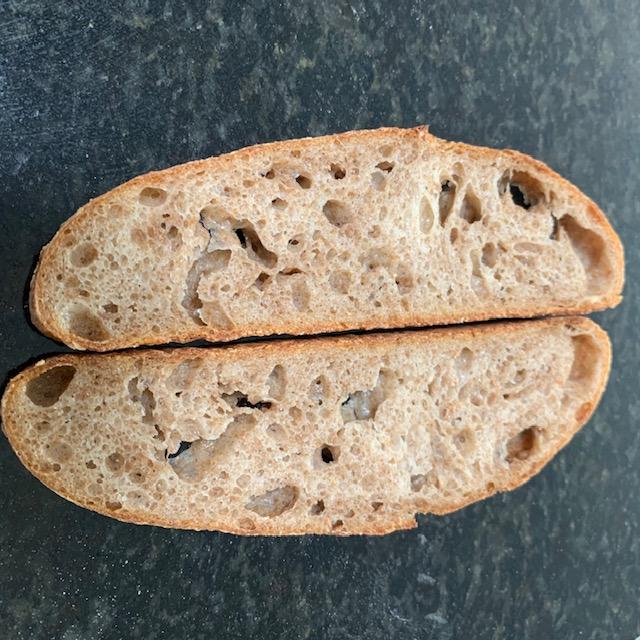 Ok, so the profile is pretty flat, but the crumb isn't too bad.  It tastes really good.

I used the same white bread flour in both these bakes and whilst the strength of the seeded sourdough was more than I thought it would be, this flour does seem to be strong and my bakes have shown that.  It was a bit of a surprise that the 50% wholewheat dough was so slack, I can only think that this was mostly to do with the wholewheat.  I will have to try again, but next time I will reduce the length of the autolyse  and the hydration especially in the wholewheat.   I will also incorporate a lot more slap and folds to build strength

Great to see that you still use the slap and folds...After recently reading the new audiobook by Jennifer Latham and Chad Robertson I have experimented with their levain build as well as using even more than before gradual addition of water (bassinage) and very short breaks inbetween during mixing and had good results without usual slap and folds... So many ways of doing this...When I started baking, I never could get enough strength into my doughs without slap and folds and now it seems to work...I think it is the use of the coild folds during bulk though...

It is getting colder now and slowly turns into autumn...so today the Brod & Taylor came out to keep the starter cosy....Kat

for my bread and I was a bit concerned at not doing any hence the nod in that direction.  Bassinage is a great way to increase hydration.  oh well, next time hopefully it will work better - sometimes you have to try something first then fine tune it to your flour etc.  I don’t have a proofer so rely on the microwave occasionally.  I have a new oven (a Bosch) on order but it will be another 2 months until it arrives here and it has a function that can be used for proofing so I am looking forward to that!

That seeded loaf is gorgeous Leslie and sounds like such a delicious bread.  I do have to try that formula at some point.  I’ve only tried two of Hamelman’s breads so far.  You mention your baking having improved when you started doing slap and folds, mine did too because I hadn’t been able to build enough structure into my dough.  However, the biggest improvement was when I started using lamination and coil folds, that for me was the turning point.

I do include lamination. these days, but in this wholewheat bake it wasn't a huge help, but as I saidI am pretty sure hydration was the problem.  I mixed using Rubaud method but felt I didn’t get enough strength so did the SLAFs as well but in the wholewheat part no way could I do that.  I think I was too timid and should have done another couple of folds when I found the pancake!  ah well, we learn something every bake