Is this an underproofed loaf, and if so, why?

Is this an underproofed loaf, and if so, why?

Hello all you knowledgeable bakers!

So, I'd really appreciate some input that may help explain the visuals of my latest bake (pictures below).

I don't particularly hate the result as it kind of ticks my boxes in terms of looks, texture, and taste. However, I'm a bit surprised at how it turned out and would of course always like to get a better sense of why stuff happens with the potential of more intentionally making it (or not making it) happen in the future.

In short, compared to recent breads, this one came out with a slightly denser crumb, and I don't know why.

I'm very much on the beginning part of the sourdough baking journey, and I generally vary a small part of the baking process every time I bake in order to learn (and perhaps even improve a bit) while still having some sense of what my changes mean.

This time I did a slightly prolonged bulk fermentation + cold proofing than usual, but attempted to keep other things the same, as I had gotten the feeling that I might be underproofing my doughs. However, the result I got after doing so looked even more underproofed than my previous breads--at least to my untrained eyes.

What particularly surprised me was the somewhat smaller hole structure in the crumb compared to my recent loafs. That and a more cracked crust (which may perhaps, however, be explained by a more shallow scoring than usual) along with a more caramelized, dark surface despite a slightly shorter baking time than usual.

Perhaps I was wrong about my underproofing hypothesis, or perhaps something else affected the result here. I'd love some input on this and perhaps other observations that could help me interpret the looks of the loaf and figure out how to go on experimenting in a meaningful direction.

Some more details on the bake:

I then add 100g peaked 100% hydration starter and around 10g salt to the mix, let it rest for a bit, and then do 4 stretch and folds in the span of two hours (until I can do a decent windowpane test).

So, here's where I changed it up a little compared to previous bakes. I wanted to push the bulking further than usual and ended up letting the dough sit covered for around 3 hours on the counter on what was also a summer day with a room temperature of 25 degrees celsius (77 degrees fahrenheit), which is around 4 degrees more than my typical baking days, and which seemed to definitely get the dough to where it needed to be (again, judging with my untrained eyes).

Then preshaping, resting, final shaping, and finally in the banneton for an overnight proof in the fridge at around 3-4 degrees celsius. This is all pretty much as usual as well, though I also let the dough sit in the fridge for 4-5 hours more than with my usual bake--a total of 17 hours--after which poke test looked reasonable (not really being sure if it's super meaningful to use that test on cold dough, though).

Alright, apologies for the novel here, but wanted to be as specific as I could. Feel free to comment on whatever--even if it's just a "good luck next time!" ;-) 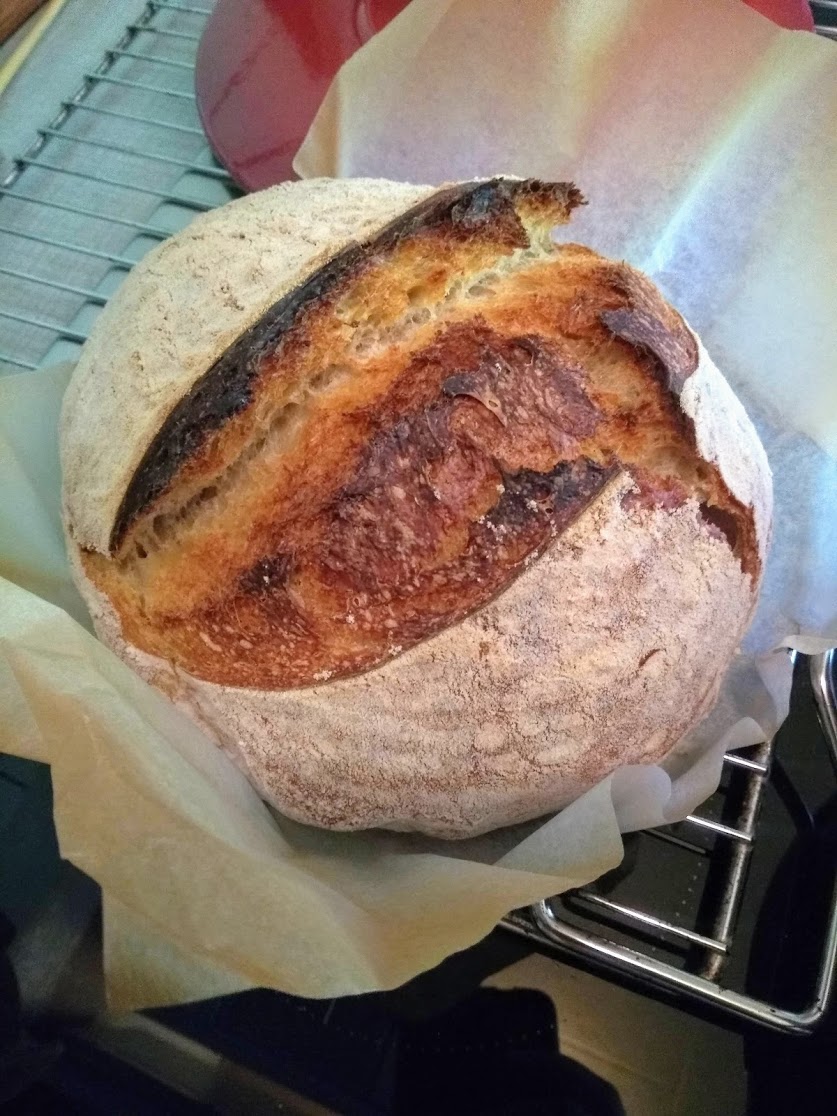 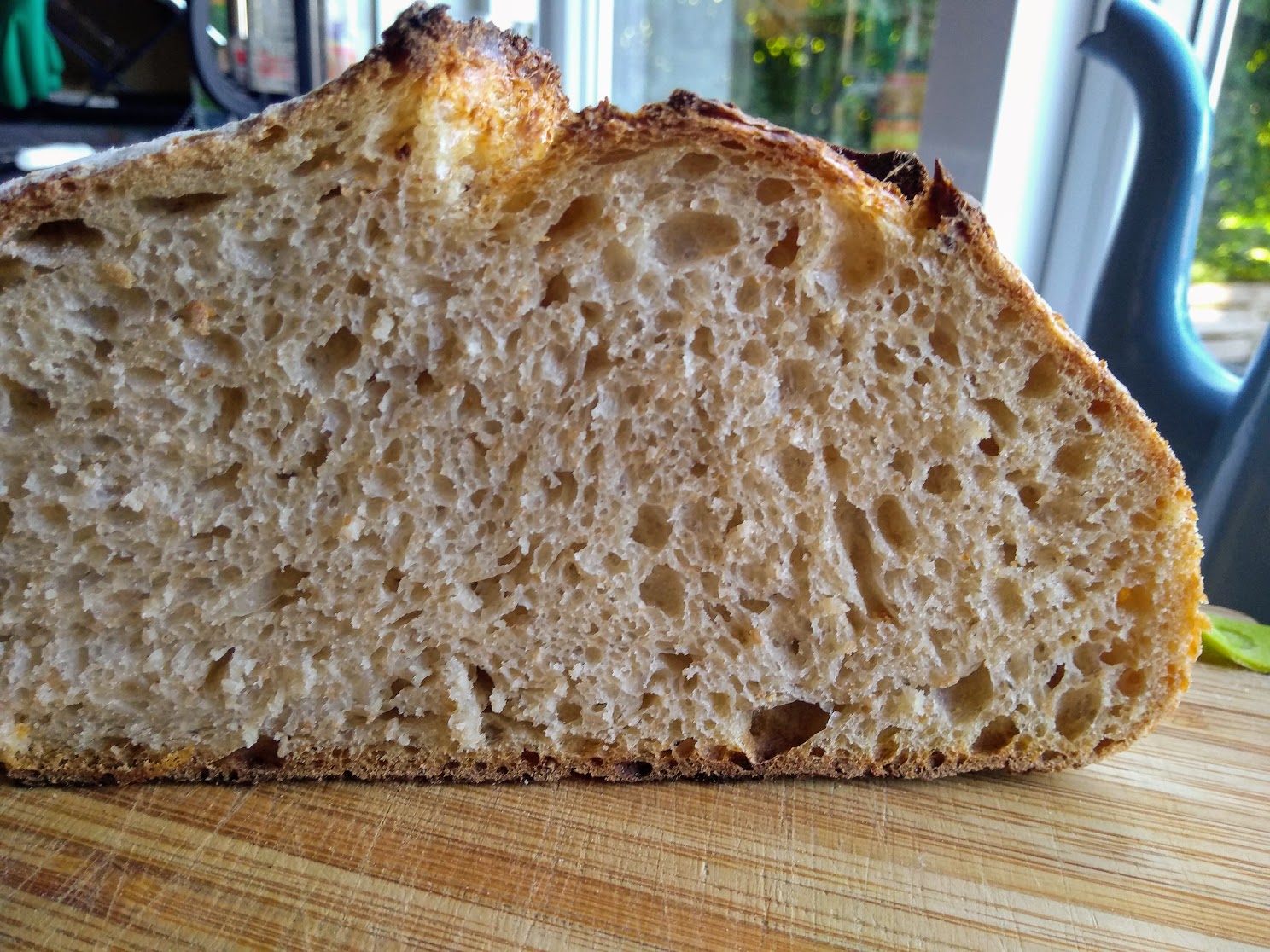 I'd make this my go to recipe for that flour combo. The crumb looks moist not dense to me.

Did making this loaf happen so easy for you this time around you're not trusting your instincts?

Hows the flavour?  Does it change as days go by?  Is it balanced in terms of salt and complex flavours?  Does it stand on its own or does it taste like it needs something?

Thanks so much for chiming in, Mini Oven!

Yea, not entirely sure what I'd change it to. Quite satisfied with the bread, and my question mainly came from a place of confusion and a desire to better understand why stuff had happened--not that that stuff was necessarily bad.

I feel like I'm only just building the instincts you mention. ;-) But yea, thanks for the guiding questions--I'll keep those in mind as well.

Personally, I love the look of this loaf! I concur with Ms. Oven. Nothing needs adjustment!

I agree with the others it looks really good, not under or overproofed at all.  If you wanted to change something to get a more open crumb you could slowly increase the hydration a bit, that might help get a more open crumb.  Otherwise I would be quite proud of that bread, nice oven spring, nice bloom and nice even crumb.

Thanks, Benny. I guess the difference between this result and previous bakes wasn't that crazy, after all, and part of it probably comes down to how my attempted variation of the fermentation time wasn't big enough to really cause a significant change. I'll definitely try out that gradual increase in hydration, though!

I am not a big fan of extreem open crumb. If it was a loaf of mine I would be very happy with it.

I actually feel the same about crumbs, but getting a better feel for how various tweaks affect the final result is still nice. Thanks for the comment, dbazuin!

yes, you lengthened the fermenting time before retarding but you have a very cold fridge so that plus the 50 whole grain flour help speed fermentation too.  A ltiile warmer than usuall room temp (not that warm really) also helped as not much would happen in the fridge at those low temps.  Now if you stuck that loaf into my neighbor's fridge, it would over ferment for sure.  She can't understand why her milk goes sour before the expiration date.

If you are normally getting underfermented dough, then you know where the big "slow down" is happening, namely in the fridge.  You can compensate for it in many ways but generally small changes early on in the whole process result in larger noticable results toward the end.  There's a snow ball effect as time progresses.  If the dough isnt fermented enough when it goes in to retard, then you will most likely have to make up for it after the retard by giving it counter time or reshaping (to warm and help ferment the dough more.)  You might want to note where in the fridge the dough was retarding (middle, bottom, in a drawer, top, full or half empty fridge) as temps can vary inside.

The times worked out nicely and the retard gave you a large working window to decide when to bake.

Thanks so much for your insights, Mini Oven! I get what you're saying, and while it might be to take it a little far, I'm honestly beginning to think about retardation as mostly an aesthetic (both visual and taste-wise) and time management step that comes after the part of the process where you have to be particularly aware.