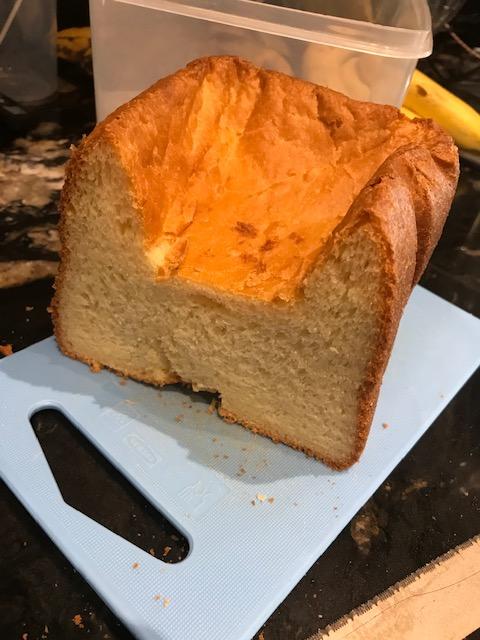 Brioche making recently has been a bit of a hit and miss with results.I always follow the recipe to the letter. I'm trying to narrow down on what variables could cause this failure.

I thought maybe the bread pan / machine was still hot from the previous bread it made. So I made the Brioche loaf my first bread of the day as the machine was started at room temperature. It turned out a failure.

I thought it could be because I didn't use 2 tbsp skimmed milk instead I used whole milk. But using this whole milk still produced good results during other efforts.

I am using a super market brand "Fast Action Dried Yeast" and the yeast is in individual sachets.  I have used 2 different types of Strong White flour.

I can't work out what could cause this sunken effect. When Brioche is like this , it is very concentrated and sickly tasting.

Note : There is an option 55 mins into the cycle where I can add more butter / dried fruit. Usually the bread pan contains the round dough mixture. But when there is a failed brioche the Brioche dough is not round.. it is just a liquid mush like a cake mixture.

Please advise.. Brioche is a family favourite and I would like it to be a success. Especially as I would like to create a blue berry brioche and a chocolate swirl one too.

did you use a full sachet of yeast, or did you measure out and use 1-1/4 tsp as called for in the recipe (got it from your previous post) ?

I ask because I have a bread machine, and the collapsed dome is usually because the dough rose too much or too much water.

"But when there is a failed brioche the Brioche dough is not round.. it is just a liquid mush like a cake mixture."

Ok, there is the biggest clue, too wet.  could be because of five things:

1. you accidentally weighed out too little flour.

2. you accidentally weighed out too much water.

3. you accidentally weighed out too much butter.

4. You used eggs that were too large. Check elsewhere in the manual if an "egg" means medium, large, or extra large, or if they give a weight.

5. You started with flour that had absorbed extra moisture.

Hydration seems to be a challenge with bread machines.  What I ended up doing is  babysitting the machine, watching and feeling the dough ball. Then I would add flour or water during the kneading phase so that the dough ball was the right 'consistency' and would 'walk' around the pan as pushed by the paddle, and get kneaded.

Too 'mushy' and the paddle would rotate underneath the dough.  Too hard, and the dough ball would not get kneaded.

So.... net.... the new bread machine user needs to learn to play the "hydration adjustment game" by babysitting the machine, adding water and/or flour. And maybe pinching off dough if the ball gets too big.

Keep track of additions... know the weight of what you held back or added, weigh and then subtract any leftover water/flour, so you know the "final total", and use that next time.  That's called "dialing it in."

Then.... when you buy a new bag of flour... that has a different moisture level... you have to play the "hydration adjustment game" all over.  :-)

Eventually, you learn to visually and by feeling the dough ball, make just one adjustment, if needed, to get it right on future bakes.

Did you actually _weigh_ the ingredients, or did you convert to volume/cups and then measure by cup?

Did you add any "dough improver" or "bread improver" ?  That could also cause extra rise.

Is the flour bleached or unbleached?

Is "potassium bromate" listed in the official ingredients list? (on the side or back of the flour package)

"I thought it could be because I didn't use 2 tbsp skimmed milk instead I used whole milk."

Were there any other substitutions, modifications, adjustments, or additions ?

I measure out all the ingredients exactly using a measuring scale or the supplied dual tsp/tbsp spoon.

> 5. You started with flour that had absorbed extra moisture.

The amount of bread i'm making with this machine. I'm more less opening a new pack every other day.

> Hydration seems to be a challenge with bread machines.  What I ended up doing is  babysitting the machine,

That's a good tip thanks. I'll keep an eye on this during this stage to make sure the dough is nice and round-ish.

> Did you actually _weigh_ the ingredients, or did you convert to volume/cups and then measure by cup?

I used a measuring scale

> Did you add any "dough improver" or "bread improver" ?  That could also cause extra rise.

> Is the flour bleached or unbleached?

> Is "potassium bromate" listed in the official ingredients list? (on the side or back of the flour package)

Only Strong white Flour was used, pls see ingredients below : 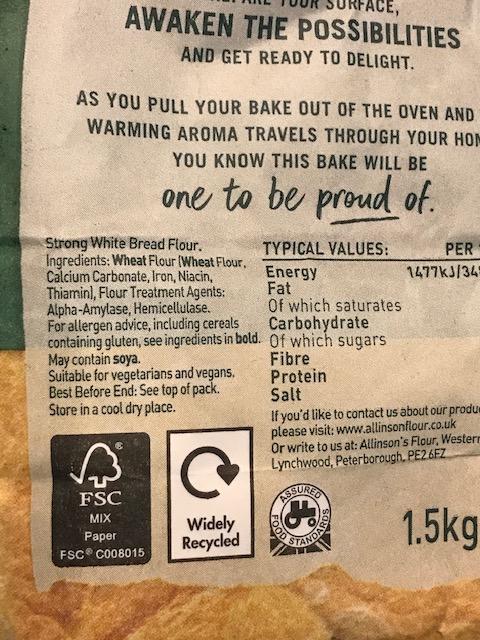 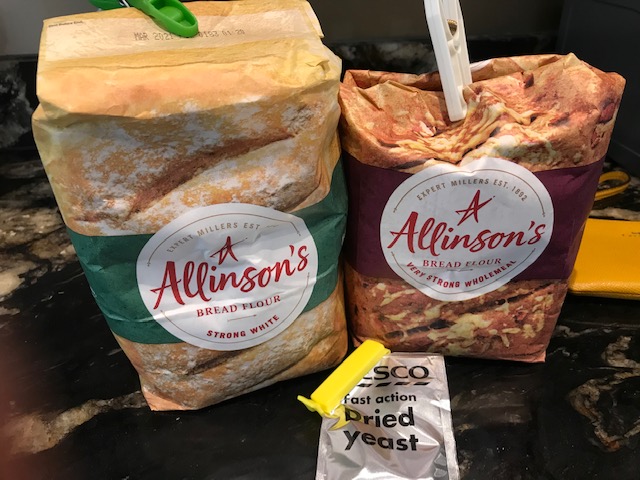 > "I thought it could be because I didn't use 2 tbsp skimmed milk instead I used whole milk."

> Were there any other substitutions, modifications, adjustments, or additions ?

no, no other modification were made.

The way it is worded ... 2 eggs PLUS the water, TOGETHER should weigh 280 grams.  That is a great way to compensate for the variation in the weight of eggs.

I did not catch that the first time reading.

Did you weigh it like that?  Or did you use 2 eggs PLUS 280 g water?  That would make it like the cake batter you describe.

Since you have had some successful brioche loaves, the detective work is to track down what is varying from the good loaves to the less-good loaves.

1. Yeast.  Perhaps static electricity from wiping clean/drying the plastic spoon with a paper towel is causing it to pick up excess yeast.  That happens to me.

2. Flour.  Using same brand and type, I assume. Might be varying from bag to bag. Possible, but not likely, unless you've been storing them differently.

Though with the Covid lockdown and panic buying, more recent purchases might have come from newer batches from the mill, and therefore be fresher, leading to quicker fermentation.  Just guessing here.

4. Salt. Has that varied, as in brand or granule size ?

6. Has the butter varied?  Always using salted butter or always using unsalted butter?  Same brand? Brands can vary by fat versus solids versus water content. (In the US, some people erroneously substitute margarine for butter, thinking it is the same.)

7. Same brand/category/size of eggs?  The combined weight thing is good but there might be something.

8. Same water from time to time? Tap versus bottled?  Has Brand/type of bottled water varied?

10. Measuring method of tsp and tbsp: leveling off versus leaving rounded after scooping?

11. Order in which ingredients are added. This does matter, especially if the "delayed start" feature is used.

13. Did any of the less-good loaves happen when you stopped and restarted the machine during any portion of the cycle?  Either infentionally or due to loss of mains/power.  This increases fermentation time if it has to restart from the beginning.

In storm season, I need to use a computer-style battery-backup, due to power interuptions of just a second that cancel the whole cycle.

Maybe newer machines are smart enough to pick right up at the same point for very short interruptions, but not my old one.

I'm still leaning towards thinking there are 2 varying factors: over hydration and over fermentation.

I think we may have solved it here. I'm using tap water... and for whatever reason it isn't always chilled.

So I shall experiment with this tomorrow. Pls see image below. 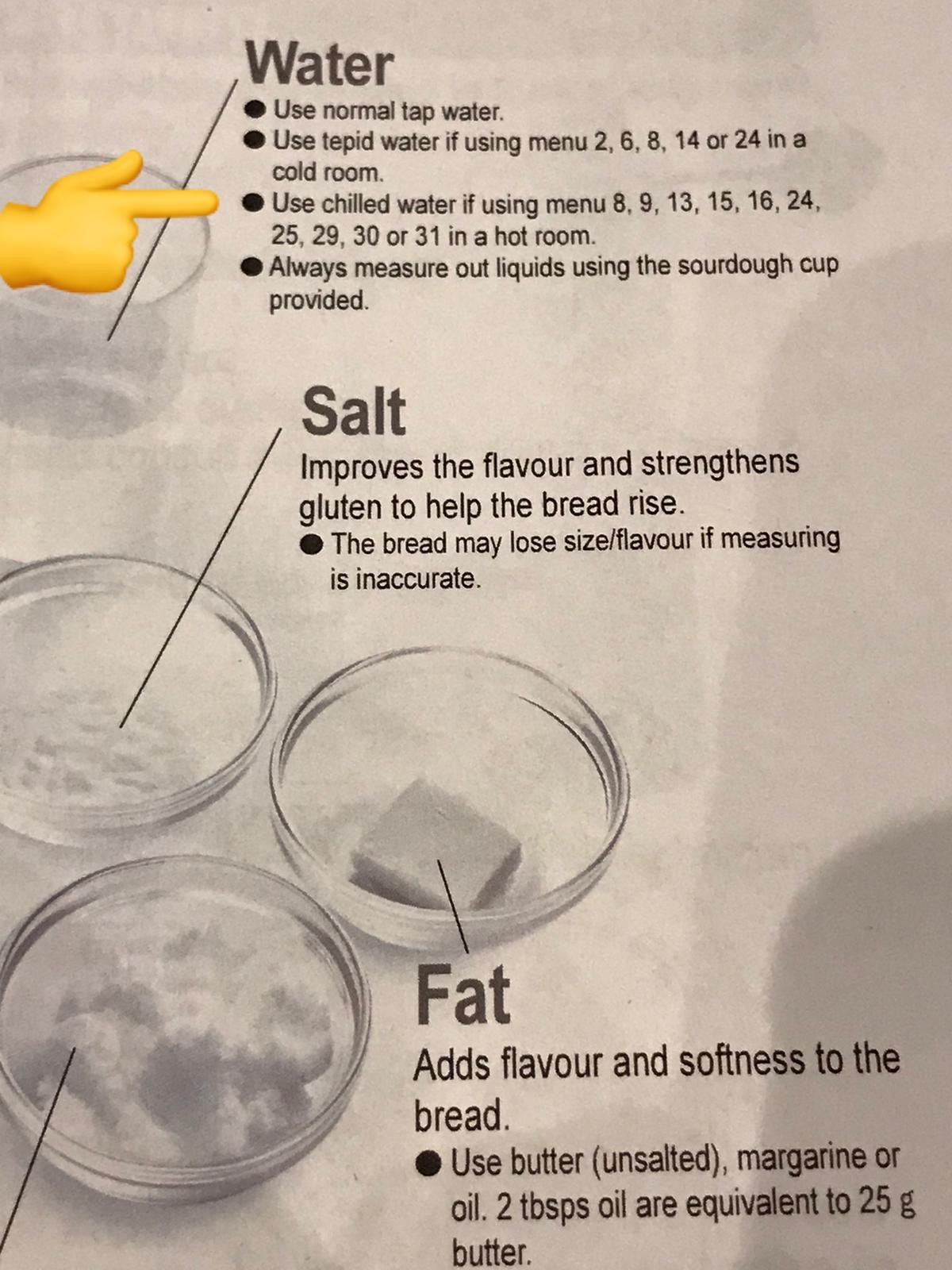 and see if hemicellulase also shows up . A double or triple dose of the enzyme might be making the difference as this would speed up fermentation.   (It could also be in chicken feed.)

Thanks for the Tip!

I'll have to experiment with using organic skimmed milk.

the liquids may be the solution.  Also if there is too much of the aformentioned enzyme, it may help slow fermentation.  Just curious....Are you getting a light alcohol aroma off the sunken loaves?

I have gone shopping early this morning and bought organic ingredients.

The results are better. The shape of the loaf is more shoe box shape. The size of the loaf is probably 50% of what it could be..unfortunately I'm not getting the huge dome that I was getting before. There is no alcohol type aroma coming from the loaf. I made sure I was using correct ingredients and used chilled water in the process.

I may just have to experiment with a bit more yeast or another variation of strong white flour. 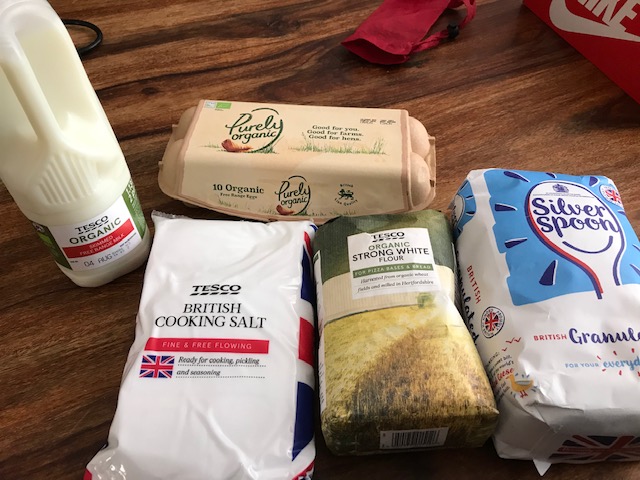 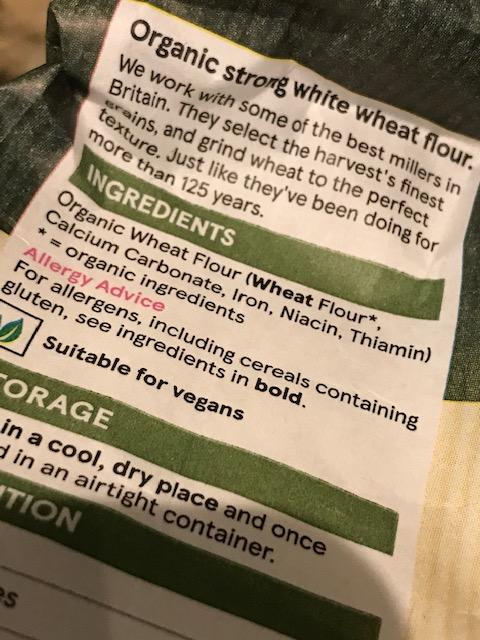 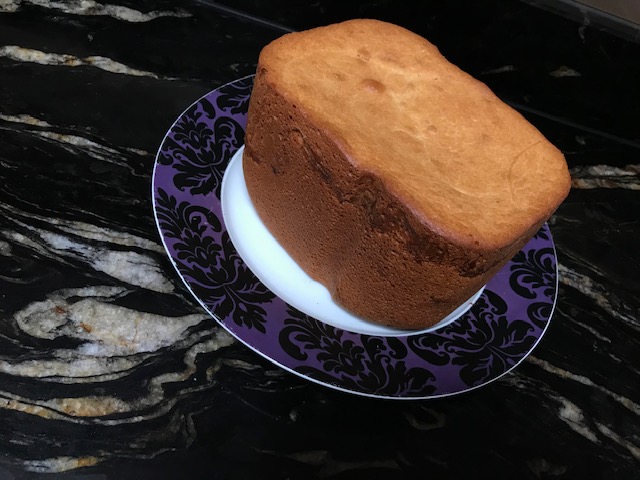 Interesting. This new flour has zero added enzymes listed:  no alpha-amylase, no hemicellulase.

So it looks like Mini is on to something.

I'm thinking that a combination of the Allinson's flour (perhaps too much enzymes for this recipe) and this organic flour (no added enzymes) may approach the "sweet spot."

I wonder if the UK doesn't have an "industry standard" for adding enzymes to white flour (like there appears to be in the US), or maybe there was an accident at the Allinson mill which produced a batch with a higher dose.

I admire your stick-to-it-iveness in working it through.

(As an aside though, you did change at least two variables at once, the ingredient temps and the flour.   So the Allinson's flour with cooler water may work out after all.)

what got me into exploring the enzyme content of white flour around the world is Tony Gemignani's "The Pizza Bible" in which he explains about adding diastatic  malt powder (malted barley flour or malted wheat flour) to the pizza dough in order to create sugar and get char spots in a home oven that does not get as hot as a professional pizza oven. This is especially needed in white flour that has not had malted flour added, nor direct enzymes added.

Virtually all grocery store white flour in the US has these added enzymes (malted flour or direct enzymes). You have to import, or  go to a specialty miller to get white flour without it.  Though I am now tempted to read the labels of organic flour on my next shoppjng trip.

My next teacher was Brick Oven Baker, here: http://www.brickovenbaker.com/pages/information-about-caputo-flours

about how Caputo added some malted wheat flour to create their "Pizzeria Americana" flour for the US market.

> (As an aside though, you did change at least two variables at once, the ingredient temps and the flour.

> So the Allinson's flour with cooler water may work out after all.)

I also changed the milk to skimmed organic and the eggs to organic too.

I have more flour on order .. this week is going to be busy!

Thanks for the links...I'll share them with a colleague at work whose into hand made bread! 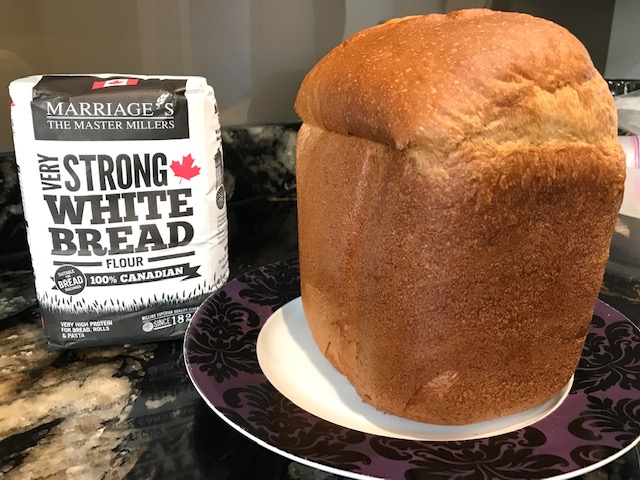 For those following. I used a 1/4 tsp more yeast and a different brand. But I don't think that affected the end result as much as changing the brand and type of flour.

I'm very pleased with the result.

I now have 40kg worth of this new flour. I think I should open a bakery now! 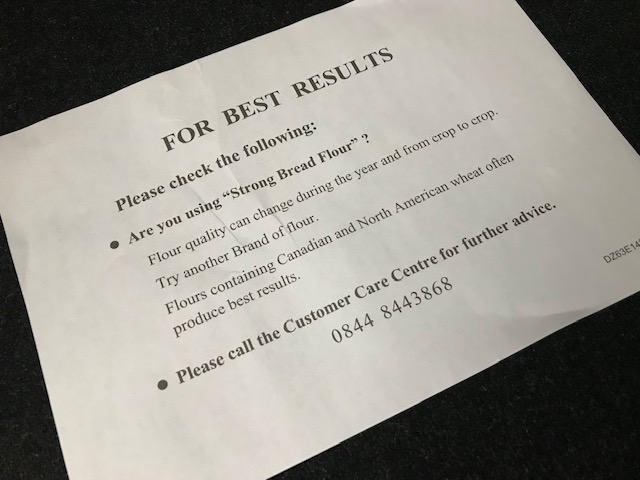 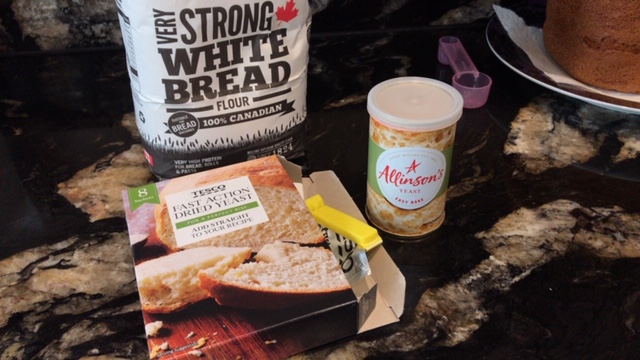 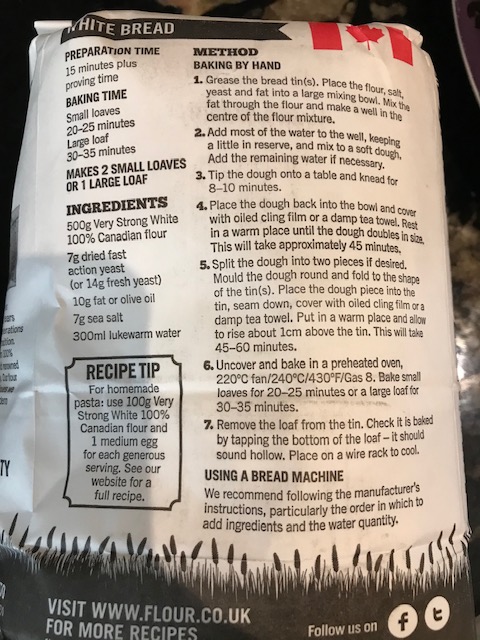