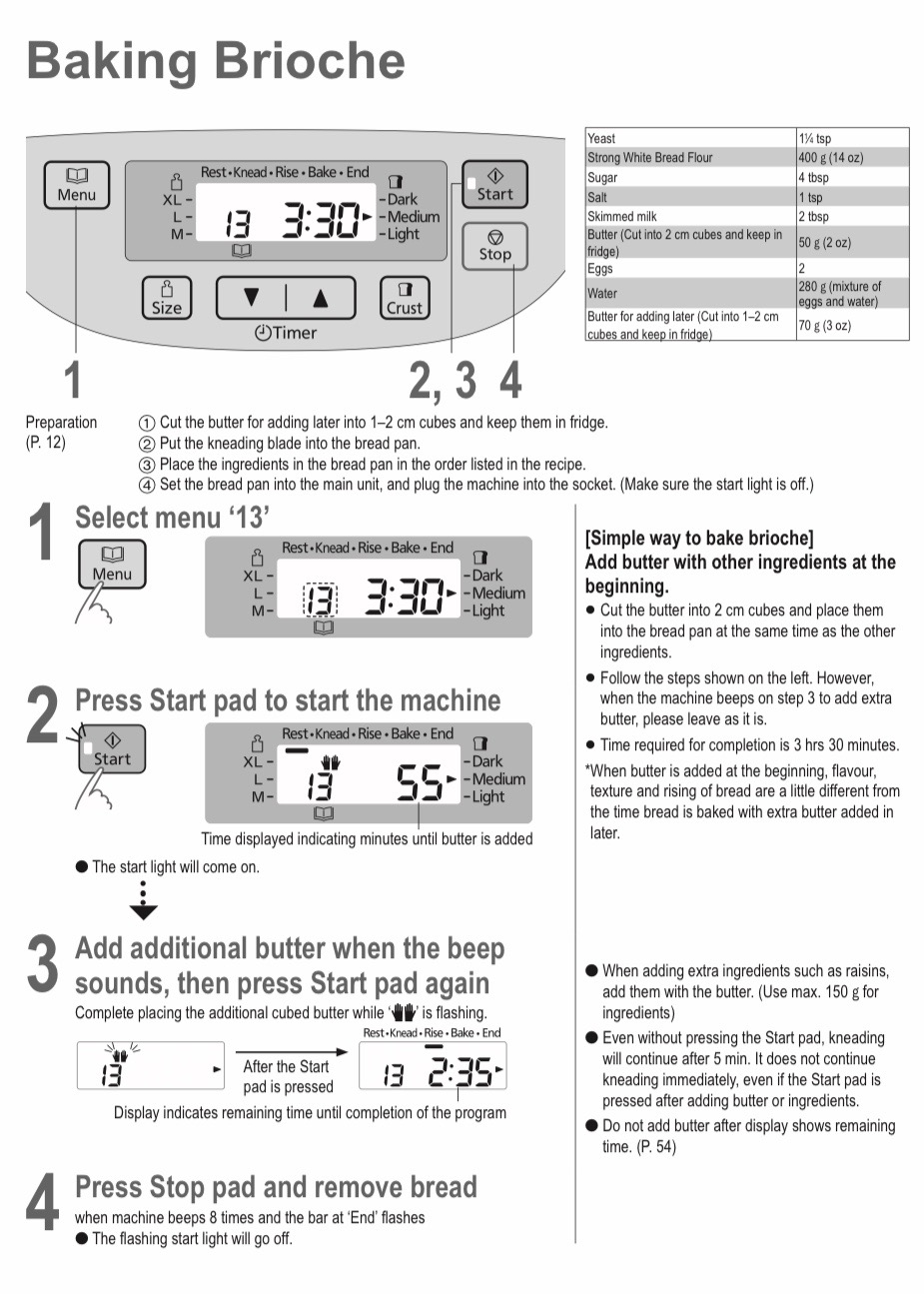 Hi all! This is my first post and first venture into bread making.

I have made half a dozen loaves with my new bread maker and I'm very impressed.

I'm a little confused with this recipe attached for Baking Brioche. It mentions twice about cutting butter and keeping it in the fridge. When do I add this butter? do I add it all at once in the beginning? or all after 55 mins.Or is it 50g in the beginning as part of the main mix/ and then 70g after 55 mins?

Please can you help? I would like to make the tastiest Brioche possible with this machine.

Also one of the issues I have with Bread Machine recipes online is that the menu options are understandably different for different manufacturers. However, for a newbie like me its difficult to try new recipes when not everyone has the same bread maker as me. The recipes supplied with the SD-2511 is quitter limited.

Please can you help?

As I see it, though, they give you 2 ways to make the Brioche bread: the "main way"using the instructions on the Left side, and the "simple way" using the modifications to those instructions, shown in the top part on the Right side.  The bottom part on the right is a "general tips" kid of thing.

They also show butter in two paces in the ingredients, one as just "butter", and the other as "butter to be added later".

So, the "main way" adds the butter listed in the first line of the ingredients at the very beginning of the process, at step 3. where you "place the ingredients into the pan in the order listed" but not including the "butter to be added later" (my additional explanation and my added emphasis).  When the machine gets to #3 you "Add the additional butter when the Beep sounds..." and continue with the instructions on the Left side to complete the bread by the "main way"..

I don't imagine separating the two butter additions by only the eggs and water makes a lot of difference, and I think you could combine all the butter, but it's just my opinion here.  I don't have one of these bread machines and haven't used one.

That's my take on it.  Maybe it will help you see it more clearly yourself.

Best of luck with your machine!
OldWoodenSpoon

Thank you. It was helpful reading this through with you. I created a mixed fruit brioche Using the main way and my parents have given it a thumbs up! 👍🏽