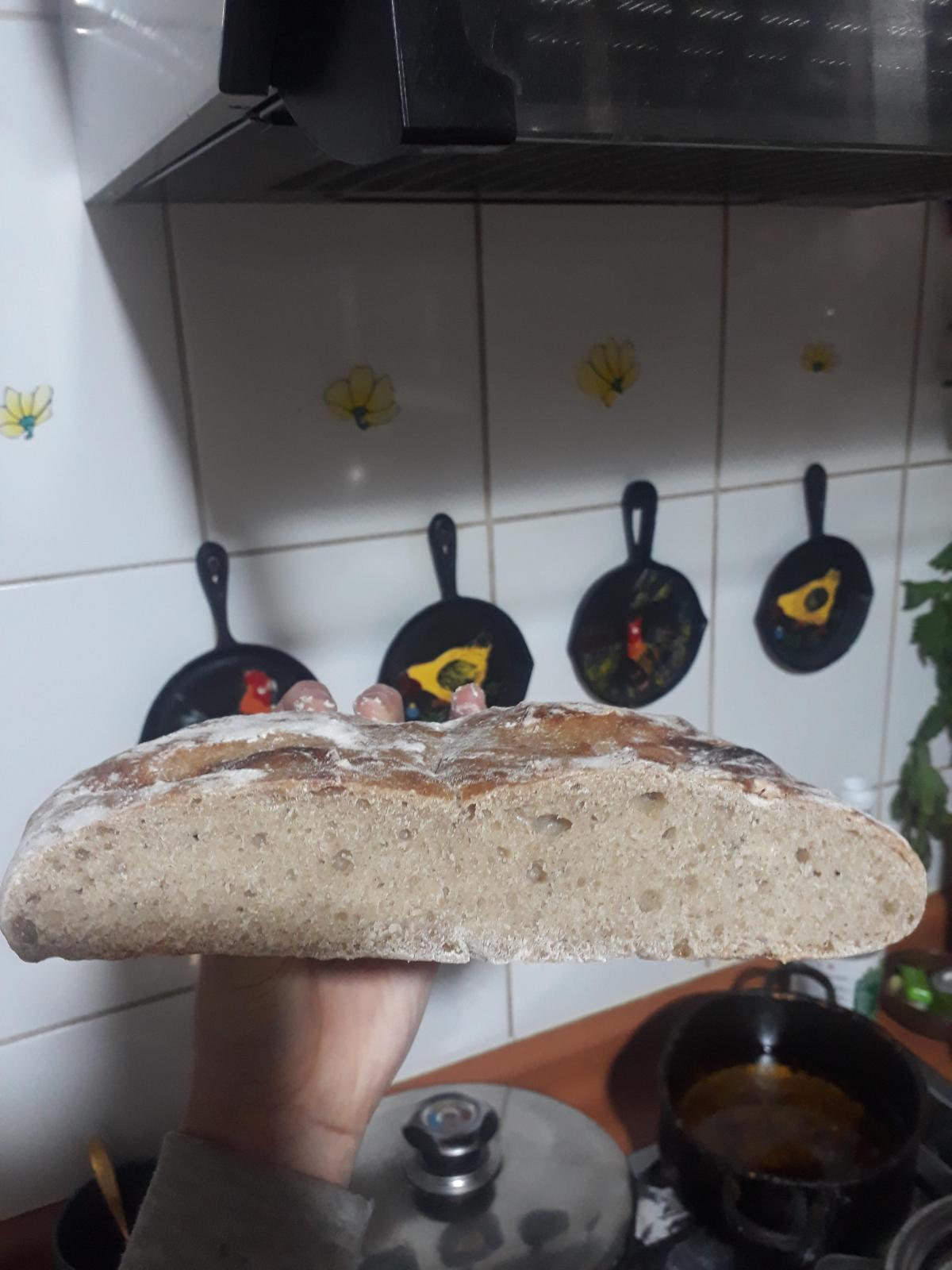 Hi! I am very frustrated!

I baked my second loaf today and got terrible results, it turned out very very dense, i'd even say gummy, and flat. I followed Tartine basic country bread recipe and here are the details for my starter (which is 3 weeks old):

I think it's important to say that while it is capable of doubling in size and shows plenty of activity it takes a long time for that to happen, I would say 12-14 hours, though I've always thought that it's because I live in a very cold country/house, correct me if I'm wrong! please. Is that necessarily true? or does it mean that my starter is too weak still?

Anyways, I took my starter out of the fridge the day before baking and fed it, 12 hrs after its feeding it had doubled in size as usual, so I took out 50g of it and built my levain with 40g of rye flour, 40g of AP flour and 80g warm water. I gave it 12 hrs to rise while I slept.

In the morning I saw that it had doubled and that the top was dome like, so it was still rising. Don't know if this is important but it just smelled like flour and water, and didn't have the tangy smell my starter usually has. I did the float test and it passed it without any problem.

After this I just followed the recipe and was very careful. (750g water, 900g bread flour, 100g rye flour, 20g salt) Also, between each set of stretch and folds I put the dough in a warm environment (26°C).

Everything seemed ok but I had very few bubbles on the surface of the dough. Then, when I put it in the DO for the first 20 min (lid on) I had no oven spring :( and for the rest of the time (25 min) the bread rose very little, although it browned really nicely and the crust was nice too.

Sorry for making this so long but I wanted to give as much detail as possible. What do you think I should do? it makes me very sad lol. How can I strenghten my starter? I don't know what to do haha

When you say "very cold country/house"  how cold is your kitchen? after your stretch and folds, the dough passed the window pane test and feels like good gluten development? any volume increase after your last fold and before shaping/baking?  What was the DO/oven temperature for the bake?  post a photo of the crumb if you have it.

12 hours rise for the levain seems like a long time. mine usually doubles in about 3 hours or less on the counter.

after last fold, we usually rest and look for something like 20% rise before preshape and final shape.

When I did the stretch and folds I felt that the gluten development was good as it did pass the window pane test. About it increasing in volume, nothing happened really

Yeah, I also think 12 hours it's a long time specially since i've always read other people's starters double in like 4 hours

That is quite cool. That 12 hours for the levain might not be wrong then.   How about your bulk fermentation? how long was that?  from the time the levain was mixed in to when you baked.   also how long between stretch and folds?

usually after your last s&f, you want to look for like 20%+ increase in volume.  now i'm thinking that you didn't bulk ferment long enough. (or starter is still weak or slow) due to cooler temp.

A 3 week old starter is still relatively an infant.  You may want to pull a small amount (5-10g) out, and go back to a 1:2:2 schedule, keeping it on your counter and feeding every day for a while longer.  The overall health, strength, and maturity of your starter will affect how long it takes to be able to double, and with regular daily feedings, stored at room temperature*, it will reach a point where it’s capable of doubling in 3-6 hours.  Ultimately, you want to see it very active and bubbly, and it should smell almost beer-ish.  At this point, it will be safe to refrigerate it, and feed it as you mention in your post.

(*Note on room temperature:  Ambient temperature will have an effect, not only on how quickly a starter is capable of doubling, but also on the balance between wild yeasts and lactic acid producing bacteria, which is why starters stored in the fridge tend to be more sour.  If your ambient temperature is below 72f (22c), you will want to find a warmer place to store your starter.  Use a probe thermometer to check various places in or near your kitchen for a suitable spot.  On top of the refrigerator or in a closet where the hot-water heater lives are spots worth checking.  If all else fails, check the temperature in the microwave, with the door cracked open so the light stays on.)

As I mentioned, just do this with a small amount, in order to keep the discards small (and don’t actually discard anything.  Put the discard back into what you’ve got in the fridge.  It might not be ready to make good bread yet, but it will make some fantastic Sourdough Buttermilk Waffles on Saturday morning!)

I will do as you recommend in hopes of it becoming stronger :)

Community Bake - Baguettes by Alfanso
Hey everyone! Im newbie
Hello
Something is wrong with my dough
leaven oomph...
END_OF_DOCUMENT_TOKEN_TO_BE_REPLACED