When has a starter peaked if doubling is not a telling sign?

When has a starter peaked if doubling is not a telling sign?

after some recent misadventures with my starter and the following conversations on the forum, I came to question this idea of doubling in size as the ultimate sign of peaking. I use dark organic rye for my starter and indeed the mixture even at 100% hydration is very solid. In a small/tall jar, it makes sense that the starter would be firm enough to stay up even past its peak time. Similarly, on the opposite side of the spectrum, when I tried AP to make a starter it was very liquid and never doubled, even tho it had lots of bubbles throughout, but with nothing to trap them that shouldn't have been a surprise.

So, if doubling is not a sign of peaking, how do I tell when my starter is ready? I often do the float test and even what I think may have been past-peak starter still passed it. Also saying that it'll be peaked at X time seems weird, how do you know that time to start with?

thank you in advance for any insight,

Hi Spikes, your observations are correct. Different flour or grain, hydrations, protein, and even kneading the dough at lower hydrations will greatly affect the percentage of rise.

Doubling is not a goal. It is the minimum amount of rise generally considered ample for the strength of a starter to be able to raise a dough.

Generally, and there are some exceptions, a starter has matured (for that feed cycle) once it has reached it’s highest height and has just begun to fall.

If you are willing to try this, it will be informative, both for you and also any troubleshooters.
Take 10 grams of your matured starter (keep the original one going) and mix it thoroughly with 30 grams of water. Once the starter is fully incorporated into the water add 50 grams of white flour. Knead the dough by hand until the gluten is developed. Put it in a relatively narrow and tall clear container and push the dough down until it is reasonably level. Mark the time and the level. Be sure to measure the temperature in the room. If possible, every few hours mark the time and the level of the starter. A warm temperature of ~78-82F will speed things up. Do this until the starter begins to fall below the highest mark. Once this is complete take a closeup image of the starter and the markings. Post it and we’ll have enough details to make suggestion, comment on the starter’s strength, etc..

Hello Danny, thank you for the suggestion, I'm definitely up for the experiment. I will start it tomorrow morning when I'd normally begin to mix the dough, that way we can compare what I think is my starter at peak. Super excited about this, it'll be very helpful.

That said I'm also a bit perplexed because it's a sort of catch-22 - I'm trying to figure out how to tell when a starter peaked, and you're asking me to mix a peaked (mature) starter into 50g flour :).

Let me clarify. Mix your starter when to think it is the most active. If you miss the peak, it will still work.

Looking forward to see your results.

I did the experiment, not sure if I used the wrong jar or what, but I basically didn't have to add any subsequent marks because there was almost no appreciable change over the first 3hrs, then over the 4th and 5th it got to about double. I'll let it be a few more hrs, but 5hrs seem already a pretty long bulk ferment.

What does this say about my starter then? 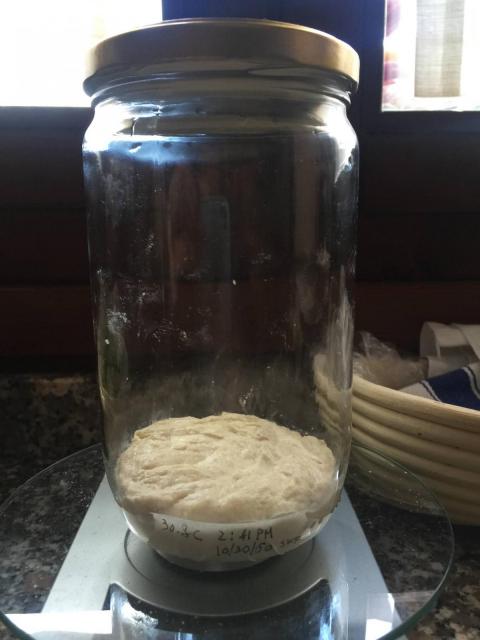 This is after 5hrs, I suppose I could have tried to mark it in between, but the space was very tiny and seemed inconsequential to note it. 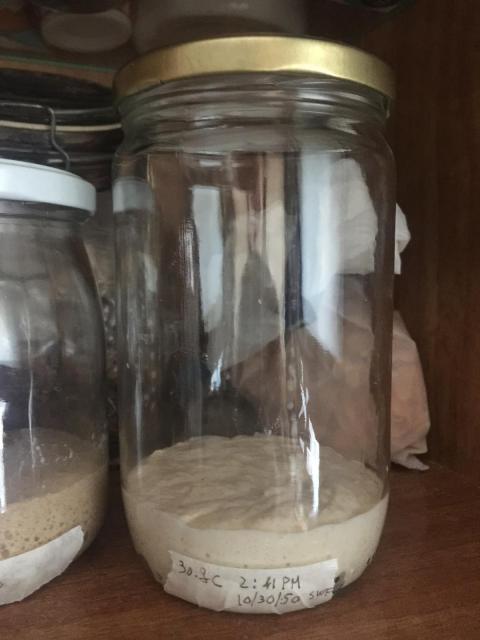 thanks for all your feedback,

Spikes, try to shoot the image down low, even with the level mark.

Like this. By-the-way, you can use a black marker on glass. It will wash off. Notice how at +7 hours the starter receded. That is the perfect time or a tad earlier to feed again. 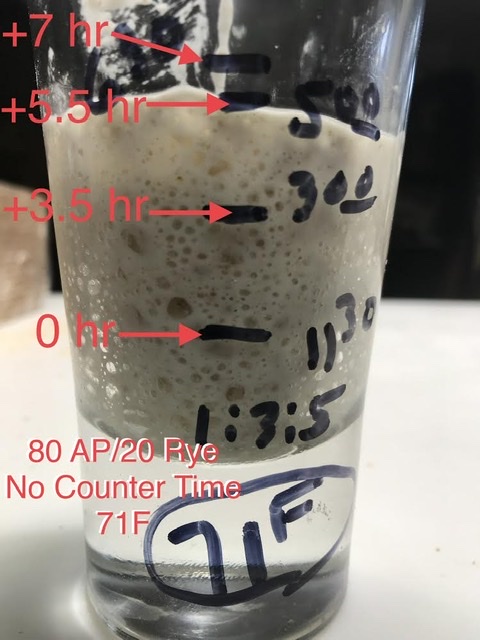 Try to use something more narrow. A small juice glass works well. Re-feed with the same mix except use 25 grams of starter rather than 10 and mark it every so often with the level and time. So, 25 starter + 30 water + 50 flour. Don’t forget to post the room temperature also. Post the image and we’ll take another look.

Keep in mind that every starter has a lag time. It is that time when the starter is showing no growth. It generally last 2-2.5 hours or so. This is to be expected.

I'll be quick on this one as you already have the answer in your question. Doubling - peaking - 2 different meanings. Doubling - something grows to twice it's original size. Peaking - something won't grow beyond a certain size, whatever that size happens to be.

good point, I suppose my problem maybe stemmed from a misunderstanding of "over-peaking". I thought a starter could sort of over-proof, so growing in size past the point you'd want to use it. It sounds like this is incorrect and when you guys say "a peaked starter" really means the point where it will no longer grow and that's a perfectly fine time for me to use it in the mix.

The peak is often past doubling depending on the feed and the activity of the starter.  My current starter if fed 1:1:1 and kept around 80ºF will double in 3 hours and triple and peaked around 6 hours.

Community Bake - Baguettes by Alfanso
Hey everyone! Im newbie
Hello
Something is wrong with my dough
leaven oomph...
END_OF_DOCUMENT_TOKEN_TO_BE_REPLACED