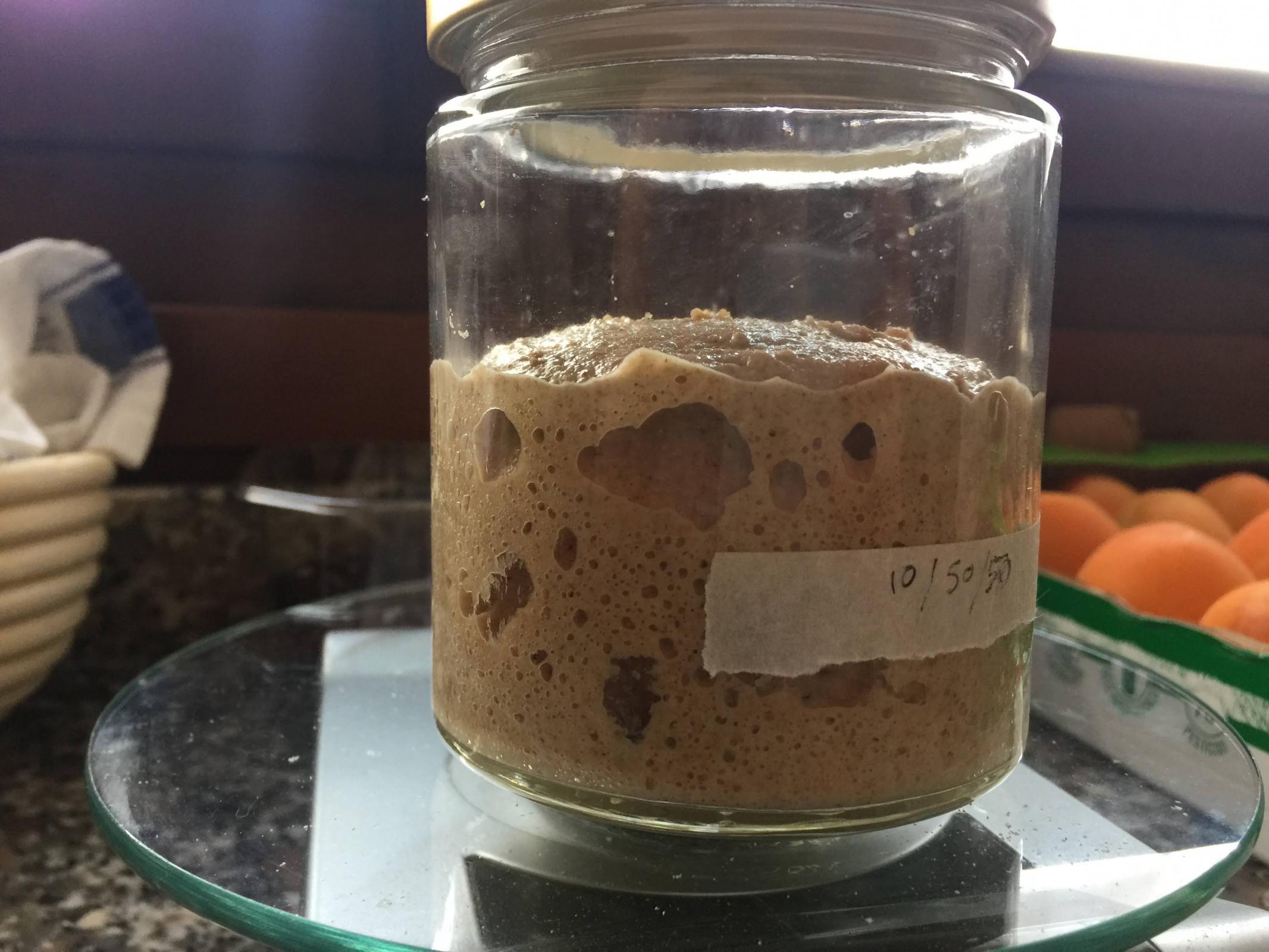 first time poster here so let me take the opportunity to thank you all for the incredible help I've received from this forum already.

A month and 2 days ago I began my sourdough journey. I got a starter going and to my surprise it worked really well on a first try (Rye flour, 100% hydration). Back then kitchen temp was 21-25C / 68-77F , I'd retain 10g starter and feed it 30/30 for a 60g starter to use in a 300g mix (I try to bake daily for my parents and one small loaf is enough for them). I feed it once a day in the morning 8am and start mixing in the afternoon at ~2pm, done baking by night so that bread has properly cooled and is ready for the next day. At some point I started baking larger loaves for two days at a time and changed the feeding to 20/50/50, but same schedule and same results.

This worked really well, almost too well at times, with starter tripling within 6hrs and passing the float test no problem. Loaves came out ok every time, altho I think I could have gotten more oven spring, but that's a problem for another time.

The issue I'd like some help with is that a week and a half ago I went two days without feeding the starter (it stayed on the kitchen counter) and things went sour from there :P. I assumed that I'd need maybe two days to bring it back up, but no matter what I tried, it raised, even with quite a few bubbles, but never in the same amount of time. Coincidentally the temperature also changed and shoot up to 30C/86F, however if anything I'd expected this to make it raise faster, but what I'm observing is the exact opposite. In desperation, thinking maybe it was a lost cause, I just used it all into a tasty but very flat loaf and took out some of the initial one from the fridge.

I took it out yesterday morning, took 10g, fed it 30/30 (tap water, didn't warm it up at 35g as usual given high kitchen temp) and within 12hrs it had doubled nicely. Since it seemed so promising last night I fed 20/50/50 to see if I could bake this morning, however it's only now, at the 12hrs mark, that it's finally doubling.

Based on everything I've read this isn't right and the doubling should occur within 5hrs, especially at this temperature. The starter looks great to me, tho, see picture. What am I doing wrong? does this simply mean that the starter isn't strong enough? should I just take 10g out and repeat the 50/50 feed?

My big doubt is that I did that with the one I had forgotten out, did that for an entire week, and it never came back. In contrast in a week I had a perfectly working starter when I began from scratch, it doesn't seem right that it takes longer to revive a sleepy starter than making a new one.

what am I missing?

thanks again for all your help,

first off is your rye flour dark rye and organic? dark rye uses the full grain and has lots more nutrients so more food for the yeast.

Next feed it a higher ratio when its at its highest point or just dropping for a few days regardless if using, wait for it to be at its peak then just remove most, leaving 10/20g or so then add 50g of flour and 50ml of water again, repeat this for a few days, this should help it keep really active and pack it full of yeast and bacteria.

Water can also play a part, are you using tap water and is it chlorinated? try boiling a kettle and pouring off the water and leaving it for a day or 2 so it can evaporate the chlorine then use that to feed.

Hello Andy, thanks for your reply. Rye flour is dark and organic. I used both tap and bottled water as I had read about the problem with chlorine, but did not observe differences.

Also could you be so kind to explain the principle behind this? I'd like to understand the why, I've read around but I'm still confused. Why would the higher ratio help to get it going? as long as I feed it again when at peak, doesn't that mean it's the time when the yeast has finished all its nutrients? if it doesn't smell (too) sour by the time I feed it again, I thought that meant it wasn't starved.

I think if you feed more, as in having a small amount of starter like 10g and feed with say 50g of flour and 50g of water then the yeast has a lot more food and a lot more chance to multiply and grow. Once its doubled and you remove most of the starter again and then feed again with the same amounts then it just increases the concentration of yeast even further.

Heat will also play a big factor. When you take it out of the fridge feed with the usual ratios but use warm water, this will kickstart the starter. I do this and then put it in the oven with the light on so its 80 degrees in there and its ready in 4 hours.

thanks Andy, I don't even put it in the fridge as I try to bake daily right now, gives me more practice. So the starter always sits on the kitchen counter (well inside a cupboard really), at ~30C/85F these days, which should be plenty hot.

I tried the process you suggested for 4 days and never got the doubling within 4-6hrs, always about doubled @ ~12hrs, maybe 1/3 growth by the 6th or so. Lots of bubbles tho.

So that's really my question, I did what you described and it didn't work, can't figure out what I'm doing wrong.

If it’s doubling in about 12 hours, is it starting to fall after that?  Many bakers get too hung up on the idea of their starter doubling, when what they should be more concerned with is when their starter is peaking.  Sometimes it peaks before it has doubled.  Sometimes it triples before it peaks.  But regardless of how much it puffs up, when it peaks is when it’s telling you it’s hungry.

Something that helped strengthen my starter was to give it a stir when I saw it had peaked.  Yeast cells are immobile, and can only process sugars that are in their immediate vicinity.  Stirring after a peak helps to redistribute the yeasts and any remaining starches/sugars, without diluting the quantity of yeasts by doing a discard.  I always get a second rise from my starter (a couple times I pushed it and got a third) from giving a stir between feedings, and I have wound up with a stronger and faster-acting culture because of it.

it's not falling right after that, not, at least doesn't look like it, still got a bit of a dome too. Normally I feed it every 12hrs so I didn't leave it for much longer to see.

The point you're making about doubling vs peaking is very interesting, first time I hear about it. How do you tell when it's a peak? when the dome goes away? I did see in the past that at some point it'd go flat and I'd start seeing marks on the side of the jar that it was lowering.

Interesting point about the stirring, I read something like that in other threads, but never tried. Will give it a go, I think what I have now in the jar is about at that point.

thanks for the input.

btw I'd still love to understand, if possible given the info I have, why all of a sudden my great starter stopped raising like that. Like I said it was doing great, then didn't feed it for two days, and in a whole week of feeding it never got back to where it was. I can't explain that.

what can also happen with rye starters because they are normally very stiff are they double in size and can take a long time to start falling back so they might be well past their peak, my starter will double in 4 hours and I can use it with confidence. If I leave it overnight for 10 hours it will be the same height as the 4 hour but if i carefully spoon it out it will be a lot more aerated and almost hollow in the middle where as 4 hours its still denser.It will have more of an acetone smell too so I know its hungry and not at its optimal.

what im trying to get at is If you just went by when to feed it when its doubled the 10/12 hour feed might have peaked hours ago and is well on its downward side.

so if falling is not an indication of peaking, what is? how do you know that yours is at peak at 4hrs even tho at 10hrs it would look the same? the smell? mine seems to smell relatively ok after 12hrs I think, altho I'm not so sure about the scale.

Also you mentioned the consistency. I noticed that when I had my first starter that doubled very quickly it would be very bubbly inside, like a gluten network. The current one not raising as much as a more gooey consistency, when I spoon it it sort of collapses and becomes wet dough sort of thing, losing all its alveoli.

Very good points about a fall not necessarily coming immediately after a rise.  It might be worth spending some time after a feeding to mark it’s progress.  You should see a fairly steady rise each hour.  Once you stop seeing it rise after an hour or two, you know it’s peaked.  It’s at this point that I would give it a stir.  Ultimately, it pays to be on very familiar terms with your starter, in order to know when it needs attention.

Some of the others may have a bit more insight on this point, but the longer it goes beyond its peak, the more out-of-balance the relationship between wild yeasts and lactic acid producing bacteria.  I think I remember reading something somewhere here that an over abundance of LAB can inhibit gluten production (I could be wrong about that, it’s hard to keep things straight sometimes), which could contribute to it turning goopy.

Community Bake - Baguettes by Alfanso
Hey everyone! Im newbie
Hello
Something is wrong with my dough
leaven oomph...
END_OF_DOCUMENT_TOKEN_TO_BE_REPLACED