I am making Vermont sourdough with whole wheat. I have made it once before and had to add a lot of water (more than the 65% in the recipe) to hydrate during the autolyse. This time with a different flour I again needed more water and added up to 70% which probably should have been enough if I had kept mixing, but my amateur brain just added another 5% making a wet, slack dough (as an aside, this was hugely instructive for me as I think hydration is why I have had issues with the FWSY recipes).

Once BF was complete, the dough was still very sticky so I shaped the boule aggressively and when I was placed it in the banneton I noticed a huge gas bubble under the skin! I wasn’t sure if this would lead to crust rupture or huge tunneling bubbles so I turned it out, let it rest 5 min, degassed gently, and reshaped. Still had a big bubble (~5-7cm/2-3” diameter as well as some smaller ones) and strong skin. I ended up popping the biggest with a fork and putting it into the fridge to proof.

I’m wondering if I need to be more gentle when shaping to avoid this and if it really was going to affect the final loaf? Do we want to avoid a strong skin? Should I not have popped the bubble?

Thanks for all the knowledge in advance

The hydration trap is an easy one to fall into, whether you’re new to bread baking or just new to a specific recipe.  During the autolyse stage, there’s always a point where you thin there’s no way in hell that you’ve got enough water, but if you just keep mixing you’ll reach the point where all of the scrappy bits become incorporated.  I’ve made the same recipe twice now, and the first time I added the whole amount of water (including what the recipe said to reserve for later) during the autolyse mix, as it seemed the dough was going to be too dry.  The dough was a sloppy mess for the remainder of the bake.  The second time, I left the reserve amount out of the autolyse and just kept mixing.  I added the reserved  water when adding the levain and salt, but even though I used the same amount of water as the first time, the second dough never got soggy.

You do want to see a strong outer skin on your shaped dough.  That thin gluten membrane is the only thing that keeps the dough from slacking into a puddle during the bake and turning your loaf into a frisbee.

As for the bubbles, I have to think that a bubble on the skin will turn into a bubble on the crust.  Probably one of those personal preference kinda things, but others may have a better understanding of the do’s and don’ts regarding bubbles than I have. 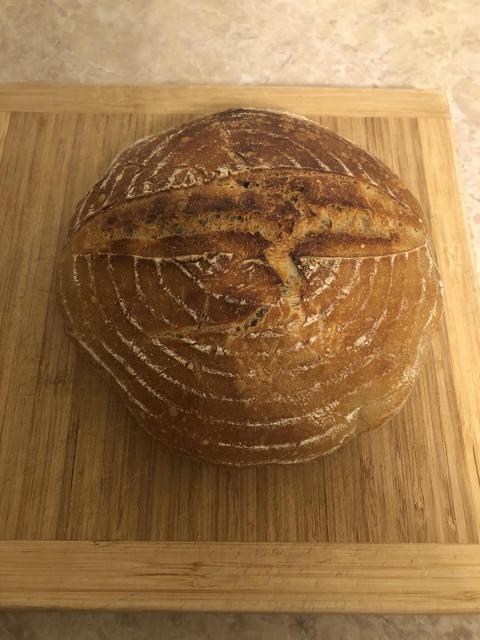 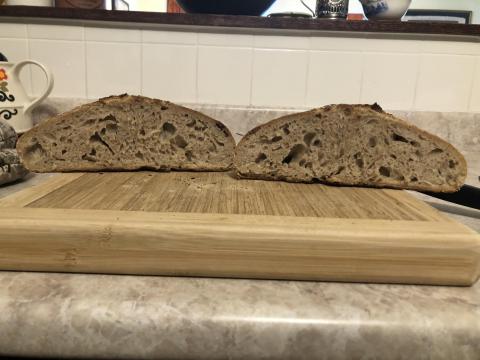 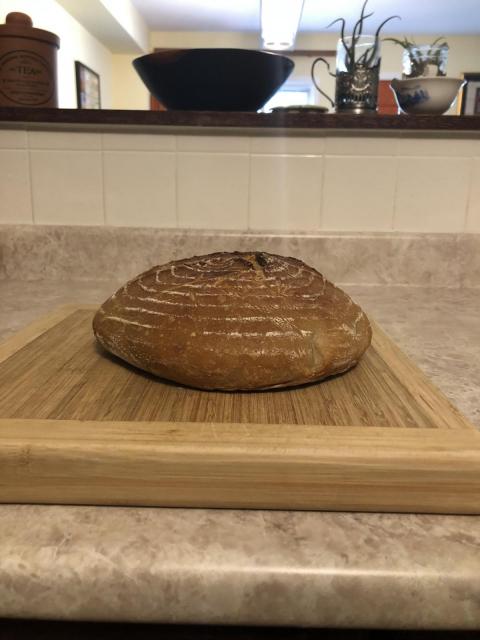 A little disappointed by the oven spring but the crumb looks good and given the real apprehension I had about this loaf, I’m pretty happy. Looking forward to trying FWSY this weekend and reserving some water to lower the hydration.

It looks good to me, but more importantly, how did it taste?  Ultimately, that’s the metric that divides a good bake from a bad one.  My theory is that anything I bake that my family can choke down with a smile is a success!  Also, as long as each bake turns out the same or better than the last bake, I can call that a win 😁

Some of the others will be better at giving you more insight about your processes by looking at your finished loaf than I am, but it would definitely be worth looking into what things can effect your oven spring.  Are you baking in a Dutch oven?  Do you do anything to add some steam?  Did you get a nice tight package when you did your final shape?  How deeply did you score the surface?  All of these things, and probably a bazillion others, can have an effect on how much oven spring you get.

Keep on keepin’ on, Marble.  Every bake we do is a learning experience.  You’re on the right track!

I very much agree w/Immortal about taste as the final arbiter on your bakes.  We can get very caught up on details that non-baking friends and family don't even think about.  Most non-bakers with whom I share my bread are thrilled and deeply appreciative...  Over time I am also appreciating the trial-and-error of it more than than the quest for the perfect loaf (which also has it's draw, of course). In short, enjoy! and keep baking!

I also very much enjoy the trial and error (even when it is stressful!) too and the ability to “science” it out. It’s a little tough right now to see what I think look to be perfect loaves and crumb on this site and people getting others to critique them but I can only strive to be one of those people in the future!

I think I’m doing everything I can for oven spring (Dutch oven, good shaping with a skin, probably need to work on scoring) other than having experience and better hands! It’ll come with time.

The bread tastes good but to be honest (and I don’t know if anyone else would agree) I think my sourdough always tastes best two or three days after the bake! So I’ll know for sure on the weekend when I’m working my next loaf!

Thanks for the encouragement!

Any time!  I think from time to time we all need to take a victory lap just for making the effort to try baking our own bread, and to remember not to be too overly critical of “mistakes” that only we can see.  Every time I say “the next loaf will be better”, Mrs Immortal says “but this one was awesome!”

The challenge of doing is what makes bread-baking special for me, and I’m sure that most who are here would agree.  Otherwise, we would have way fewer people asking how to fix the problems with their crumb, and more people asking where they could buy a loaf like the ones in the pictures.