Had my second go at sourdough focaccia, and I have to say I’m satisfied with it! What do you guys think? Would love to hear your expert opinions ❤️! Oh and I tried making a all purpose and einkorn flour sourdough, and I think I added too much water :( , the dough was soo slack and weak, so after mixing in all the ingredients, I put it in the fridge for an overnight retard. Will do the folds tomorrow, I hope it became a easier to handle tomorrow! Any tips on that? 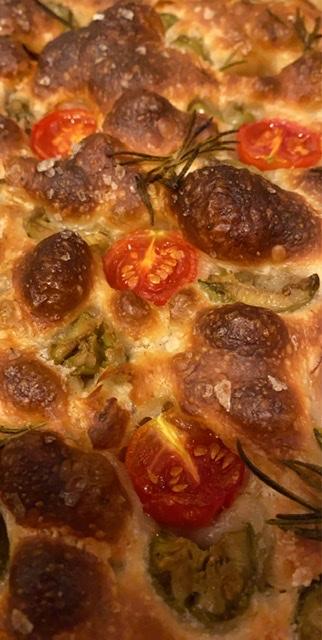 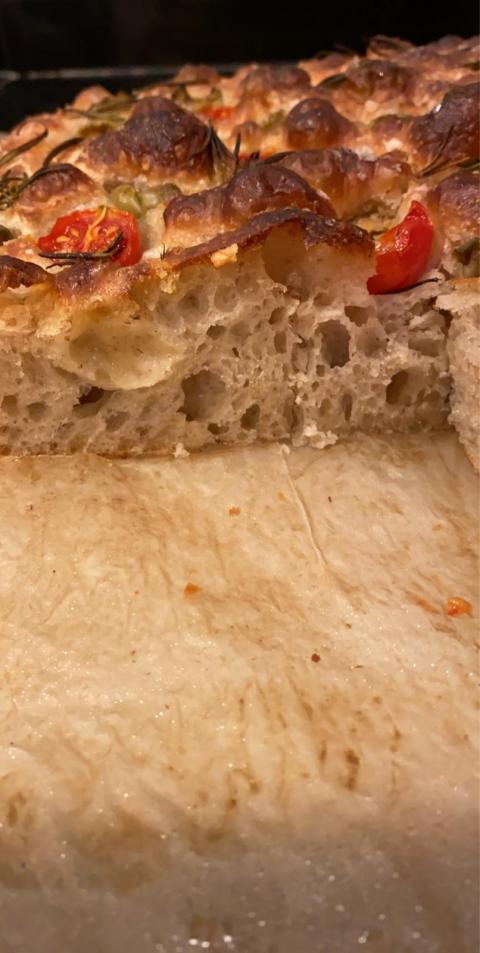 Looks great!  I agree with the cold retard...that might be your only hope for the super slack dough.  But, it shouldn't be too much of a problem for a pan bread like this.  Good luck!

I have been baling with Einkorn for many years now, and it is always very slack.

I have experimented with everything from very low hydration to very high hydration and it is always slack.

I once made an 100% Einkorn dough at 50% hydration and sat it in the counter, I turned around for a minute to get my other prep started and in that one minute the Einkorn had oozed across my counter and halfway down to the floor.

With a quick reach I caught it in my hand before it landed on the floor but that is how slack Einkorn dough really is.

I always read in the fridge, it helps the flavor and it helps the structure a little bit, but it still will be slack.

If you knead the dough right after taking it out of the freídle then it will tighten up into a stiff ball, giving yo hope that it will hold its shape but if you don't put it into the oven almost immediately then it will dash all hopes the you see ir run across your counter like a scene from the 1950s movie The Blob. Seriously, it moves all by itself.

I felt that 🥺. I tried salvaging it, but it ended up being to slack for anything. I think I’m going to stick to plain old rye

I know how you feel. I have battled with Einkorn for many years and have felt defeated many times.

What I do now when my wife has a craving for Einkorn, that just won't go away, is to throw the dough into a pyrex vessel that has a lid (the vessel doesn't matter), add water, salt (at least 2%) and dry yeast (it doesn't matter which one, I tried them all, so I just use ADY now. Stir it with a vengeance.

Yes, I did say stir, that is how I take out my vengeance for all those previous disasters. I keep staring aggressively until I can see through the clear pyrex that all the flour has been wetted (if you don't get all the flour wet now, it will stay dry and yo will be eating raw flour, you already know how I know that so factually). Then I stir slowly to make sure the flour in the center is wetted.

At this point the "dough" is pretty stiff and you might get the idea that the Einkorn dough really can build up strength and be worked into a dream dough bar. Don't believe it! t lies! Its full of trickery!

I put the lid on the container and push it to the side.

There it sits, lonely and without attention for 12 to 18 hours.

The next day I put it into the fridge, yes I tried all the different shelves (different temperatures) but it didn't make any difference for me.

It stays there for two to three days to develop flavor, you could do 24 hours as well, but I like to make it as flavorful as possible, thats just me.

When its completed it's sentence in the fridge, I take it out that morning before breakfast, because I want it to get up to room temperature which take a few hours.

45 minute before I want to start being I turn on the oven to 500º F (it seems to be a slow oven, I really don't understand why it takes so long to heat up but once its up to heat, it holds that heat nicely without running the gas burner very much), I put in the smallest Dutch Oven and lid that I have, into the oven, and I check the dough temperature to make sure that its at room temperature (if not then I delay everything an hour).

You would think that since Einkorn is so slack that it would simply plop into the dutch oven but no! It will not! It will stick to the Pyrex like glue so I really do have to shovel it, and the shoveling happens rather quickly because I'm not fond of the 500º F temperature that is starting to cook the front part of my body via infrared radiation.

The moment that the dough is all inside the dutch oven I place the preheated lid on top (its rather satisfying to hear the scream of the dough as it begs for mercy but decades of battle with Einkorn has left me bitter and out for revenge so the lid goes on and the dutch oven is carefully slid into the oven.

I drop the temp to 450ª (yes, I have scorched and even burned several loaves that got stuck in the 500º F dutch oven, I don't want to talk about ).

Now comes the tricky part. I do two things that are different, first is that I live in the High Desert so I bake for 65 to 70 minutes. If I did that when I lived at sea level they would burn and stick to the dutch oven (don't ask how I know that) so  at sea level I bake at 475º F for 45 to 60 minutes.

This is where a thermometer becomes critical. Bake that loaf until it is no less than 200º F and no theater than 211º F (if it actually exceeds 212 the first department will show up all by themselves to help you remove the dutch oven from your main oven and they will also be kind enough to put the fans by your door to get rid of all the smoke (again, please don't ask).

The other odd thing that I do is that I don't remove the lid when baking. Einkorn develops such strong crust that no knife that we own can penetrate its steely outer layer (including our never used electric knife). So I leave the lid on and the crust can be cut by mere mortals. Maybe you are a lot stronger than I am and maybe you use knives that actually are sharp so your mileage may vary.

When its up to temperature and you remove the dutch oven from the oven, you will find that the Einkorn load will readily fall out of the dutch oven effortlessly. Resist the urge to cut into it for at least 2 hours unless you really like gooey bread a lot. I don't even bother any more until the next day, then the center of the loaf will be perfectly fluffy. Seriously, wait for as long as you can tolerate it.

My times and temperatures will vary radically from yours. Most people will bake for somewhere between 30 and 45 minutes and then remove the lid and continue baking for another 5 to 15 minutes. From what I have seen its common to use one single temperature throughout the entire baking process. My wife likes a thin, light colored crust so my technique, temps and times support that.

I also observed that most people bake for the enjoyment of it, they find the kneading, stretching, and folding relaxing and satisfying. They find that theor sense of creativity is satisfied when figuring out how long each phase should take and how they should score the dough. I had those fantasies once upon a time but my head-on encounter chawed all that.

I now battle with that flour much like Sisyphus battles with his boulder, its a challenge that is ongoing.

PS Yes, using the technique above which is none other than Jim Lahey's actual, original No-Knead Recipe, I do get 100% Einkorn loaves that my family loves to eat, no I don't hate Einkorn anymore, yes I do recommend that you try my approach or make up your own, and keep trying to bake Einkorn because is tasty, has more nutrition than modern wheat, has that crazy orange tint to it (the USDA says that unit is due the high level of beta carotene that Einkorn has but no other flour has) and most of all, once you have made an edible loaf of Einkorn bread than all other bread becomes a true joy to make. ROFLOL

Good luck my friend, don't give up. you can conquer this challenge.