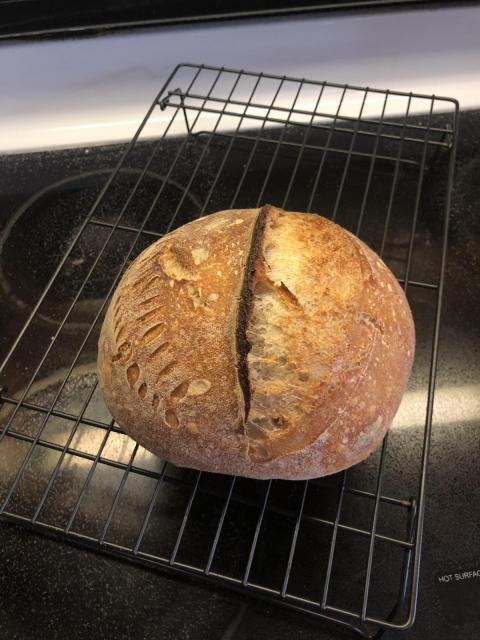 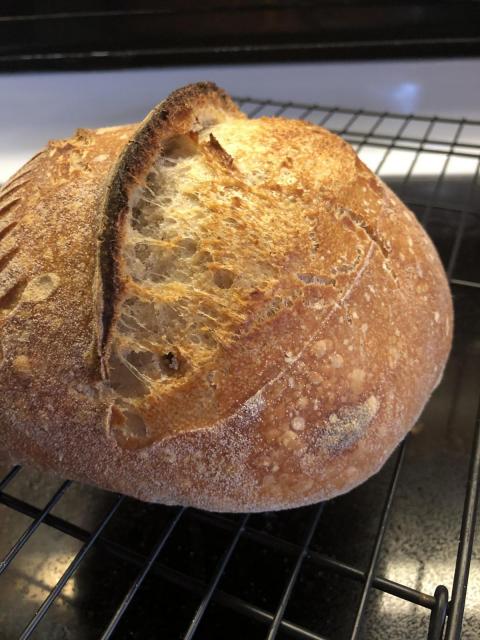 Not too shabby, for my first loaf.  I didn’t get much rise out of it, although I did seem to get a little bit of oven spring.  There are a number of things that I’ll do differently next time.  I’ll post a crumb shot later this evening.

That's a good looking loaf.  show us the crumb.  what was the process/oven setup?

i apparently overlooked your comment from the other day.  Sorry for that, I hope you don’t think I was ignoring you.

I describe my oven setup in a reply to Mini below, although I think I may have forgotten to state that I had pre-heated all of that at 450f for one hour.

As for my process, I really must admit that it was a mess.  Re-reading the instructions for the recipe I was using revealed a few things that I could have done better, should have done differently, or just forgot to do altogether (such as a bench rest between final shaping and retarding).  I’m going to try again tomorrow, providing I can find some whole wheat flour (another part of what was wrong with my process: substituting ingredients without realizing the effect on hydration level).  Hopefully, with the next loaf I can slow myself down a bit, be more methodical, and stick closer to what the recipe is telling me to do. 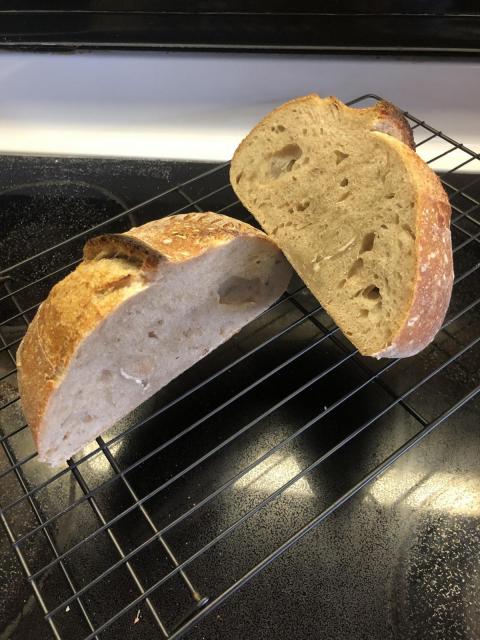 So the results are in!

I followed the Beginner Sourdough Bread recipe at The Perfect Loaf:  https://www.theperfectloaf.com/beginners-sourdough-bread/

The crumb was kinda dense, which I’m assuming is because it was underproofed.  The recipe didn’t call for it, but I’m wondering if I should have removed the dough from the fridge for a bit to allow it to bench proof.  I didn’t do a “poke test”, so to say.  But I did notice that when I touched it the dough sprang back right away.  I’m sure that I read something about that somewhere around here, but I should have maybe paid closer attention to that tip.

I think I may have also overworked the dough during the bulk ferment, but it didn’t feel like things were coming together the way they should have after just three stretch & folds.  Looking back on that, maybe I should have trusted the recipe a little more than my instincts.

And of course, as time goes on, my starter will strengthen and develop.  I think that would help tremendously.

It was bread flavored, I’ll give it that.  The next loaf will be better 😁

I guess it’s also worth noting that I cut the recipe in half, as I only wanted to make one boule.  I also did not have whole wheat flour, or bread flour.  I used King Arthur Unbleached All Purpose flour and Rye, and I augmented that with about 10g of Vital Wheat Gluten, which I’ve used in the past with great success for my non-sourdough bread baking.

I guess it’s also worth noting that I cut the recipe in half, as I only wanted to make one boule.  I also did not have whole wheat flour, or bread flour.  I used King Arthur Unbleached All Purpose flour and Rye, and I augmented that with about 10g of Vital Wheat Gluten, which I’ve used in the past with great success for my non-sourdough bread baking.

Baking right out the fridge is ok.
You can also check If the dough Is Ferment enough by giving it a little shake, If it is wobbly it is ok.

the crumb and bottom are telling you there should be more heat under the loaf.  Did you happen to get a picture of the loaf bottom?  Try going down a shelf or two in the oven.  Important to get heat under the dough where it can have the most influence in the beginning of the bake.  :)

I didn’t think to take a pic of the bottom, but it had the same golden-brown color as the top, so I thought it looked good.

My setup is a little bit strange...  I don’t own a Dutch oven (and none of my pre-Father’s Day hint-dropping worked.  I got a Lowe’s gift card instead.). However, I do have a very nice set of Pampered Chef stoneware baking dishes that a friend of my son’s gifted me several years ago.  I discovered that two of those pieces, which look like a cheesecake pan and a large stone mixing bowl, fit together almost perfectly.  I used the cheesecake pan as a base, and the mixing bowl as a lid.  These were on the next-to-bottom rack in the oven.  Underneath this, on the bottom rack, I placed a pizza stone, as I didn’t know how well the stoneware would transfer heat, and I didn’t want the bottom of my loaf to burn.  The next time I bake, I’ll try leaving the pizza stone out of the equation, and I think I might also benefit from finding a way to generate more steam.

I’m still of the opinion that my results are due to a mixture of weak-ish starter and poor technique.  I think I’m going to try to set up for another loaf tomorrow, to see if I learned anything 😁