I am new to this forum, as well as to sourdough starters.  I could use some advice regarding whether I should keep my acetone-smelling starter, a result of me missing two feedings -> cutting from 2X/day to 1X/day on back to back days.  And any other tips welcome.

Our (my kids and me) first starter didn't work out.  I used 1:1 ratio with 50g rye and 50g water.  It seemed like my flour was super absorptive because the mixture was a very thick paste.  We gave it a go over 5-6 days and with little change, we tossed it.  I learned here my starter was getting too much air, as it would form a thick skin on the top, so now I cover with plastic wrap.

Things were chugging along, it would almost double to triple, but has never passed the float test.  I eventually cut down volumes to save on discard, to 10g starter, 10g rye, 12g water.  Then Monday and Tues last week, work got busy and I missed the morning feed two consecutive days, so the starter only got the evening feed.  Immediately, the starter reeked of acetone.  I've read enough in these forums to know it was due to underfeeding and feel pretty guilty about messing it up.

To fix the acetone smell, the last 4 days:

The starter would still double (not triple), but the acetone smell was ever present.  Not as strong as when I originally underfed, but present in a way that made me wonder if I had negatively shifted the yeast and bacteria ecosystem.

This weekend, starter now 1 month old, I had some extra time, so wanted to give it a shot at baking sourdough bread.  I followed this recipe: https://www.thekitchn.com/how-to-make-sourdough-bread-224367 with bread flour.  Deviations

Indeed, the bread did not rise much, though it tasted well enough that the kids asked for thirds.  Ball 1 (rm temp proofing on left).  Ball 2 (overnight proofing in fridge on right). 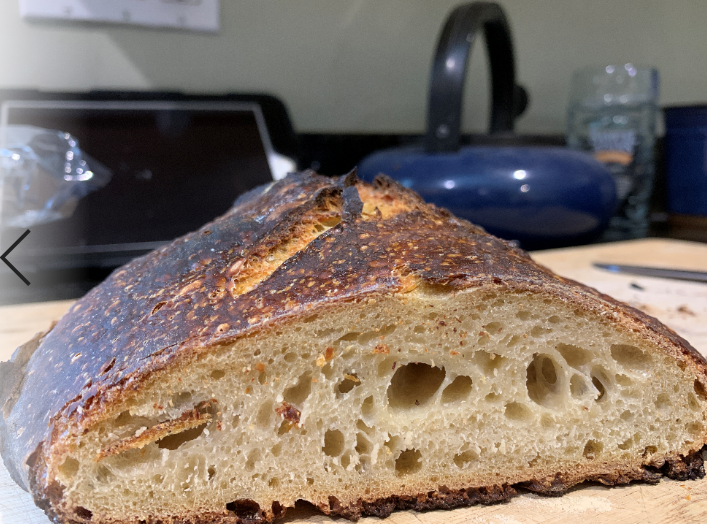 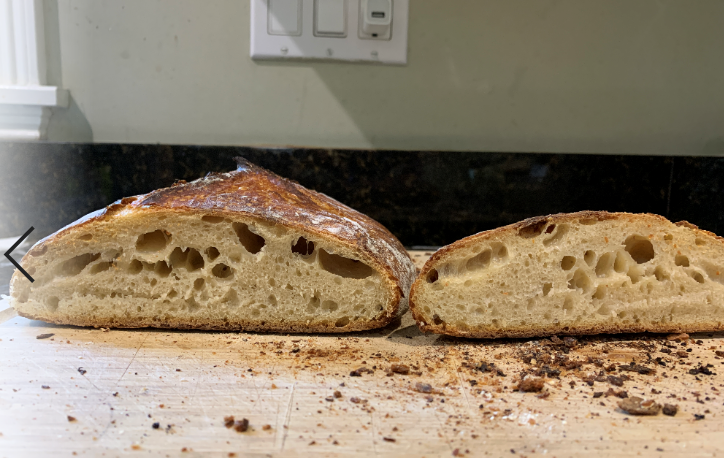 I am wondering if the lack of rise is because the starter has become too acetoney, or if it is because I overproofed it, or something else?

To do a side by side experiment, I fished out some starter discard that I had accumulated in the fridge, likely from over a week ago (I didn't keep discard from when the starter smelled like acetone - too scary) and did the same 10g starter, 17g rye and 19g water for both.

I figured it'd take a few days to get the refrigerated starter back to full strength, so I plan on doing this side by side for a few more days. 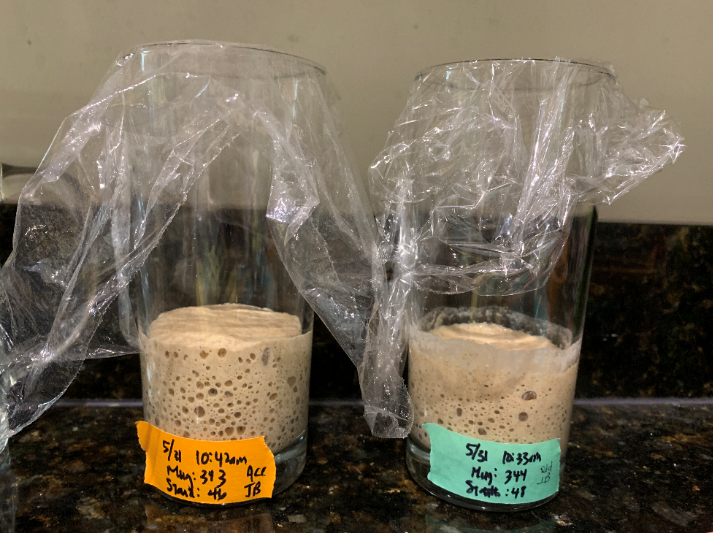 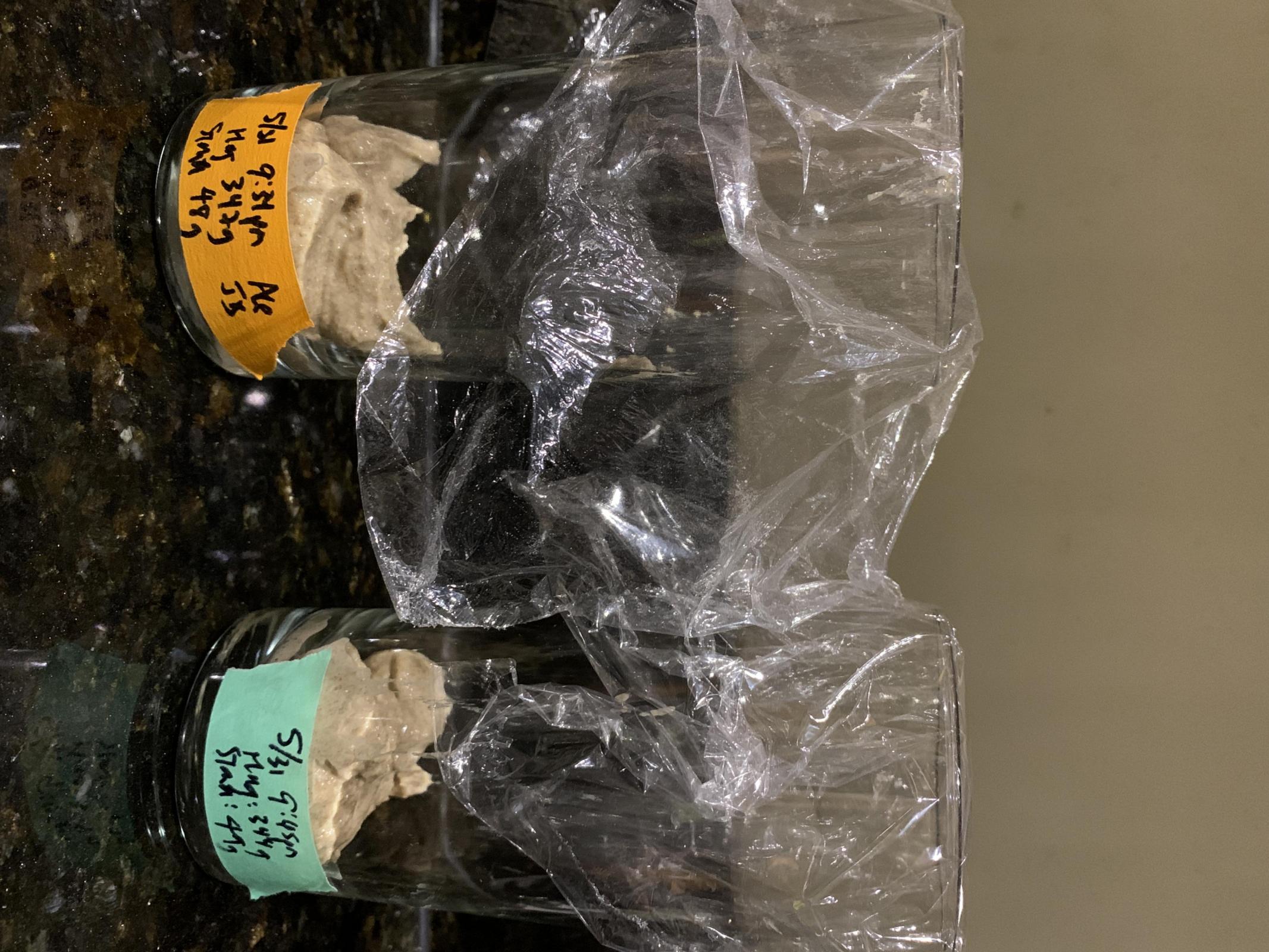 Could you give me advice about

Thank you so much for offering your time to help a newbie, I really appreciate it.

the acetone smell is fine, it just means the starter is more sour and hungry. If you dont want an overly sour starter feed it more often using cooler water and a lower temp fermentation, otherwise feed like normal and you'll find the smell goes until its hungry again.

Thank you both for your advice.  I wanted to report back on my A/B testing after a few additional days (now 6 days since missing morning feed on back to back days):

My observation is that Original seems to be peaking later, but also sliding down a bit earlier than Ace.

I'm inclined to do one more day of this A/B testing and if it continues well, I'll probably pick going forward with Original because it seems to double as well as Ace, but smell better.

For those of you with more experience, is there any advantage/disadvantage to a starter that peaks later, but falls faster?  Thank you kindly!

Some pics (sorry, I flip it before uploading, but it's not cooperating)

June 1 9am (right before first feed of day, Ace on left, Original on right) 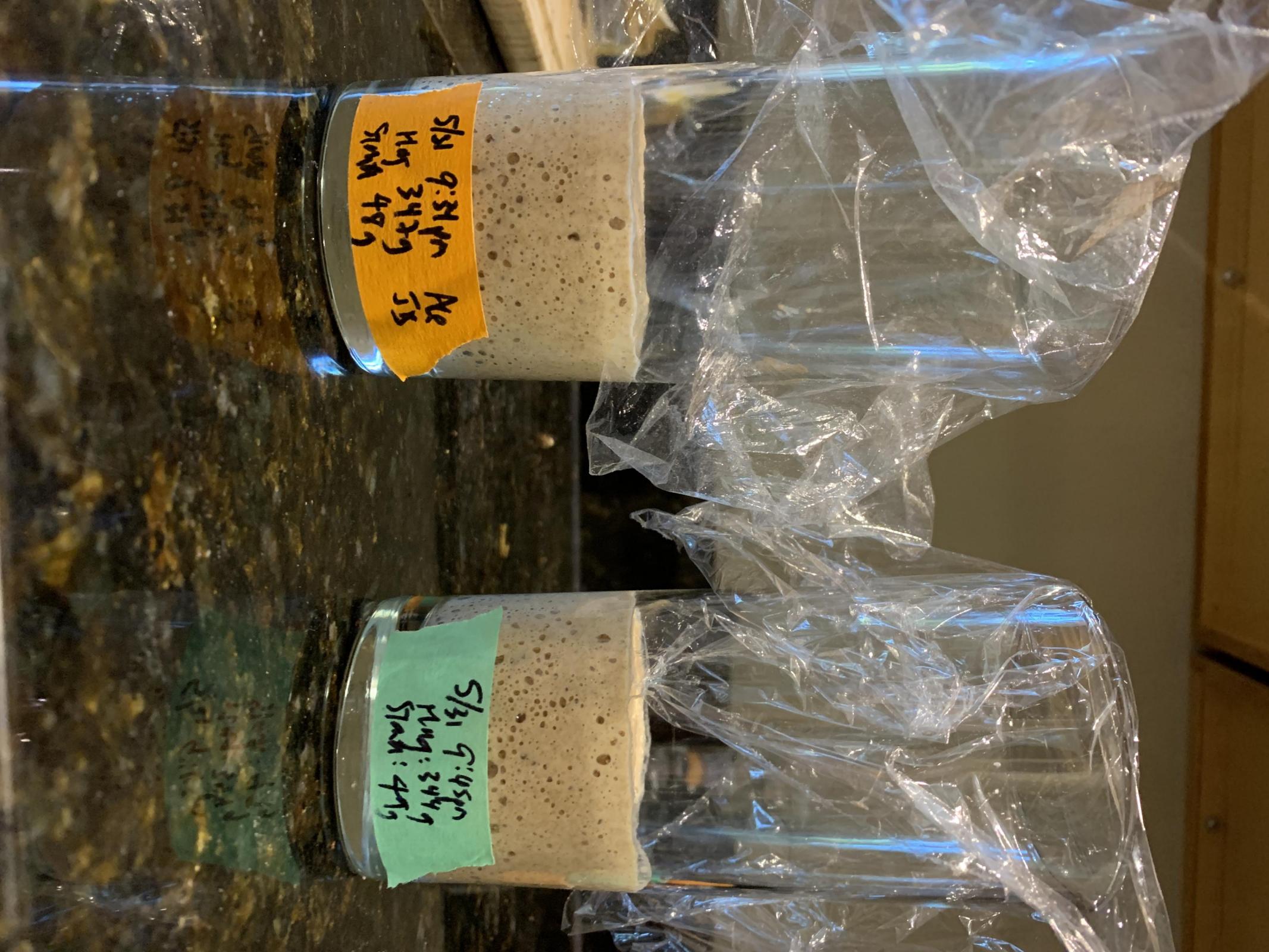 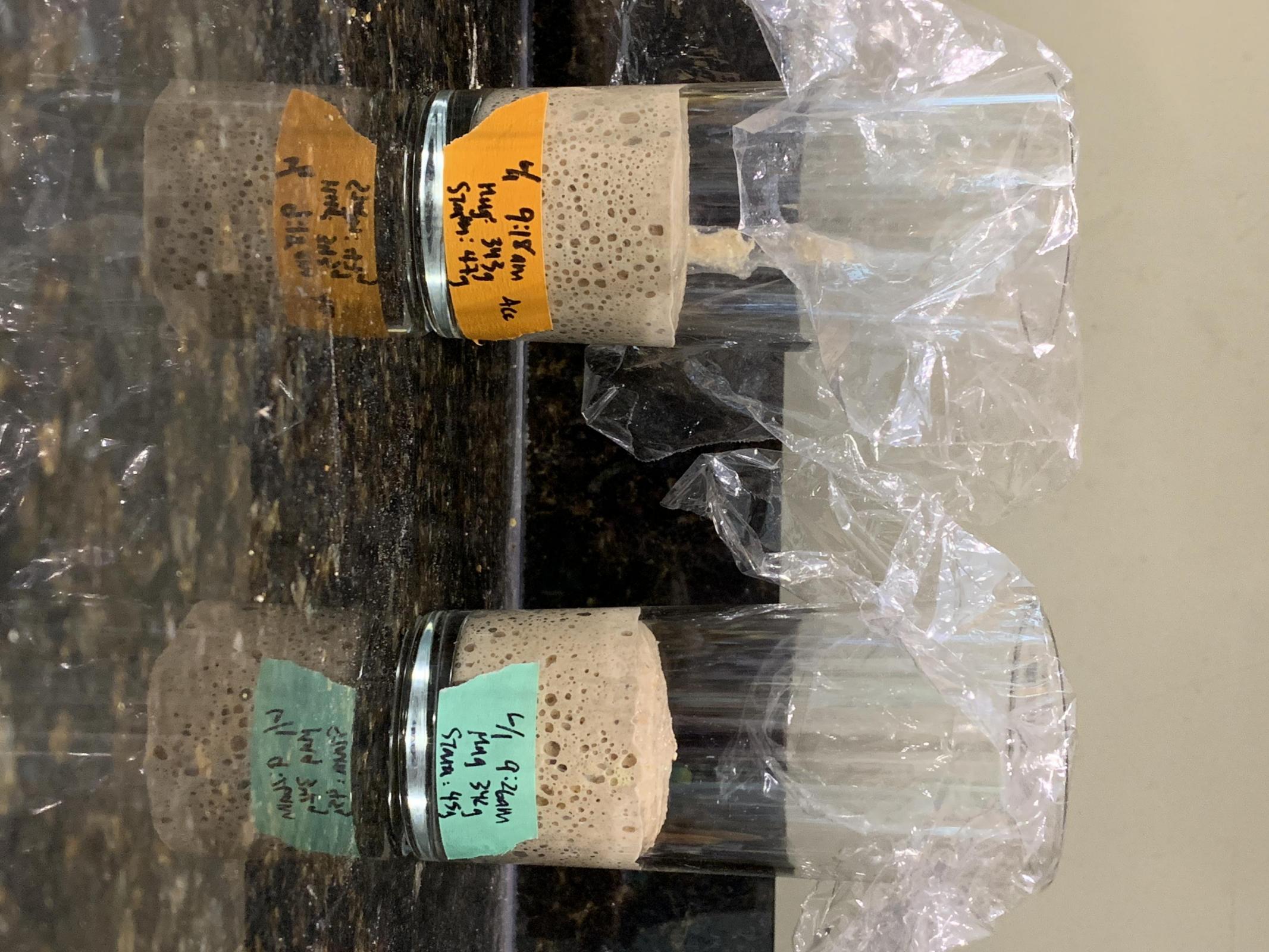 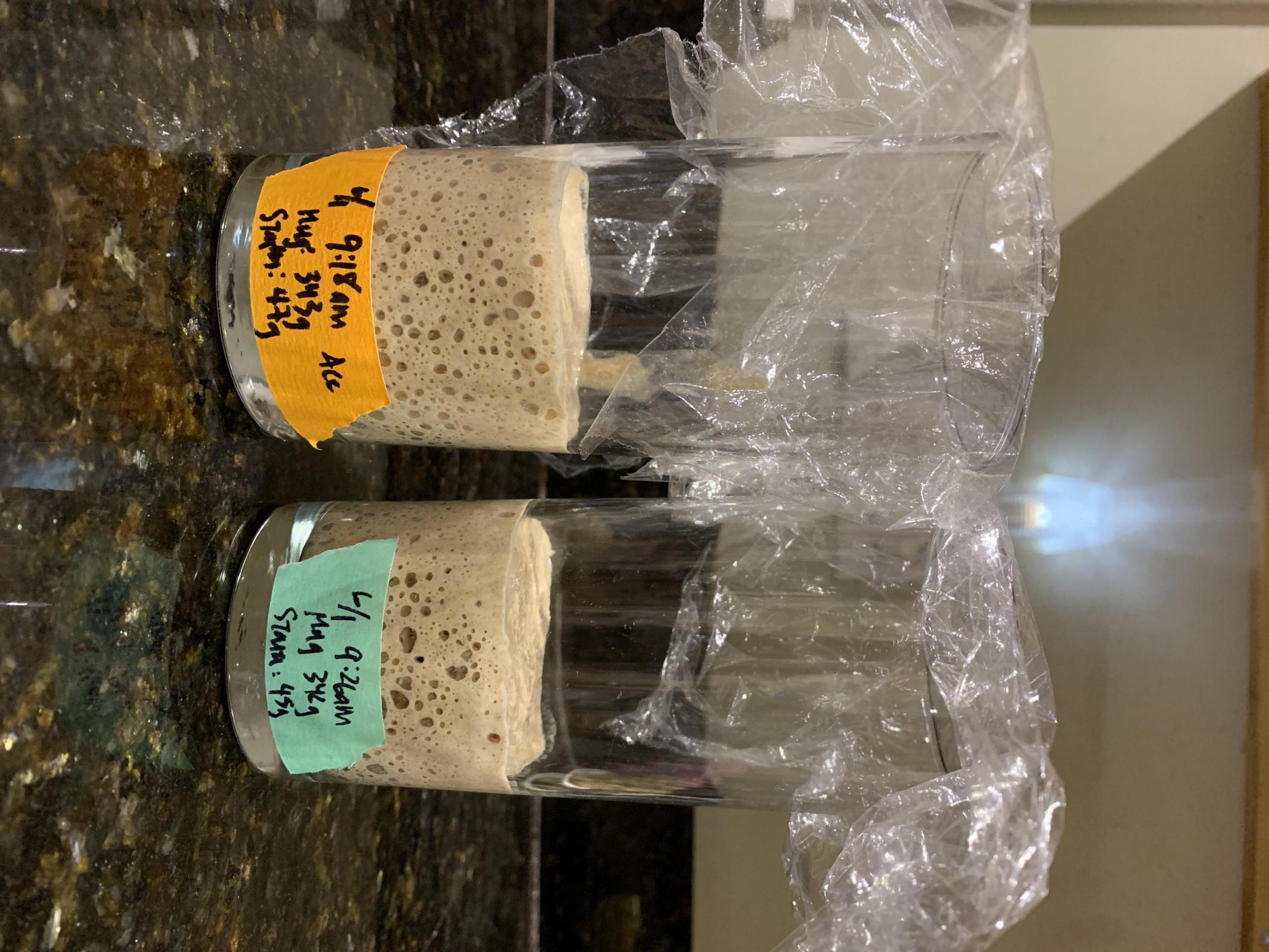 June 2 9am (right before first feed of day, Ace on left, Original on right).  Similar pattern of Ace holding onto its rise better. 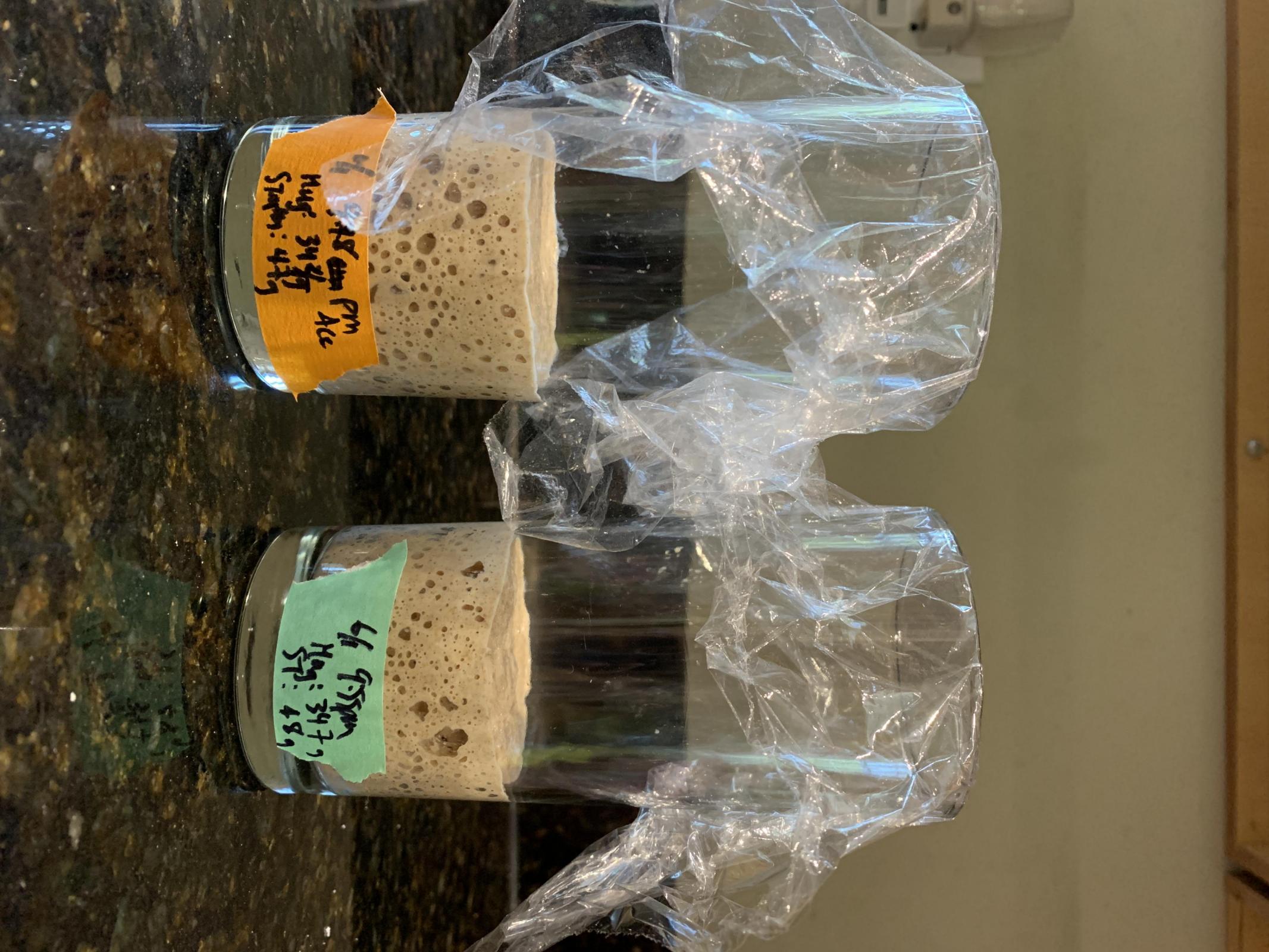 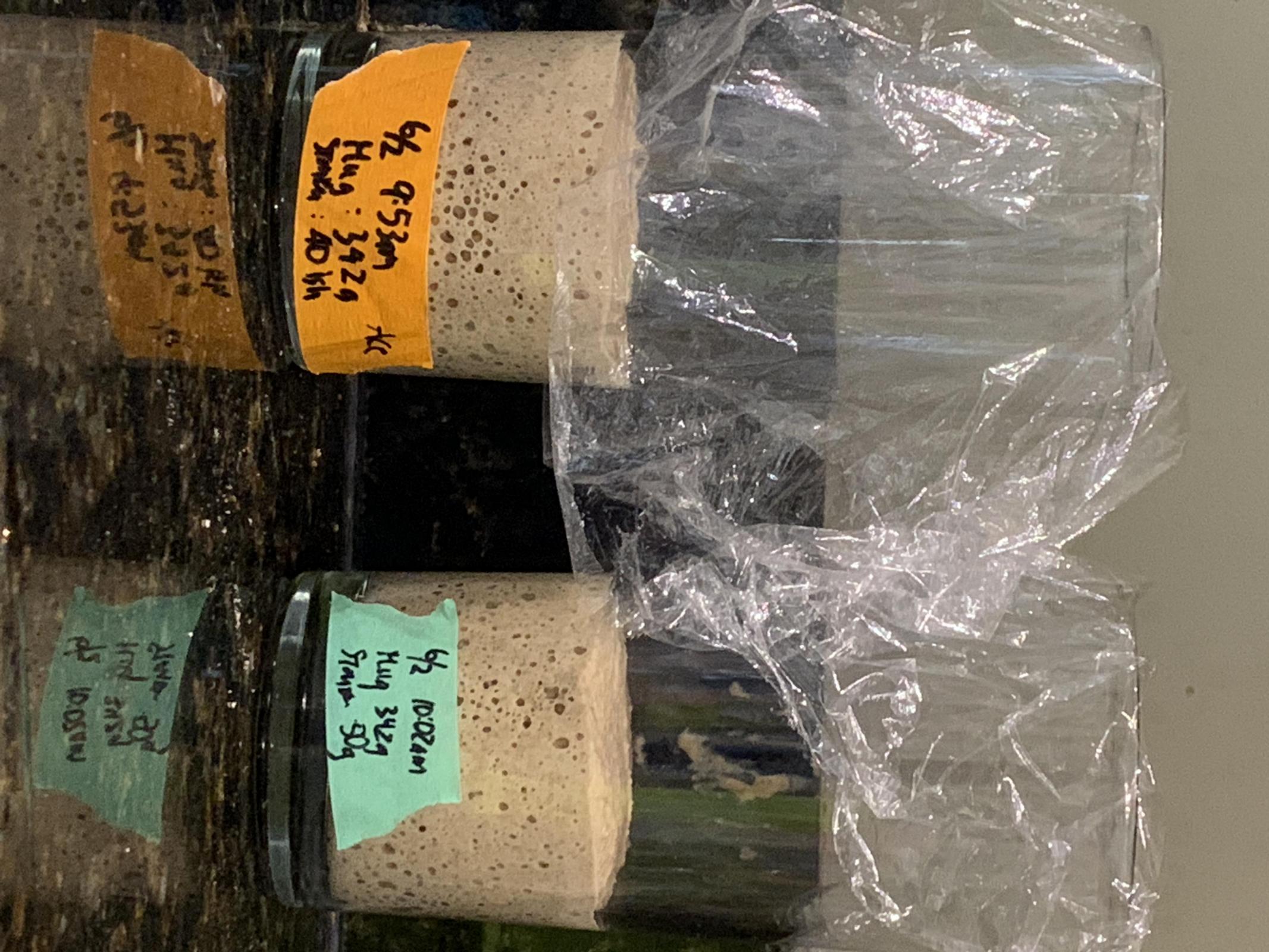 Thank you for the advice.

Which to keep - either one really. I believe they are or will be the same after a little while anyway. You're probably just seeing the difference between a healthy starter and a not quit as healthy starter. With regular feeding they most likely will end up the same beast. Enjoy!