Maybe its the hand kneading?

Maybe its the hand kneading?

I'm trying to make The Perfect Loaf Beginner sourdough. I've baked bread before. But I can't believe this is a beginner loaf. It's so hard. https://www.theperfectloaf.com/beginners-sourdough-bread/

I don't think it's the starter. I made a 180g starter overnight, split off 40g to make pizza, and 37g for this recipe. Used a Rubaud on the pizza dough until I had windowpane, set it to rise, it doubled, baked it fine.

The bread? Same levain time. Autolyzed an hour next to the levain. Added salt, water and levain. Dough was 80 degrees. It felt pretty good but because it was supposed to be stretch and fold, I didn't use Rubaud. After two stretches, it was so  wet and slack, stretch and fold was super weak so every 30 minutes or so I tried to work some strength back in. I got great gluten strands almost cobwebby. I tried the Rubaud but I really need to make half batches to do that, my arm still hurts. I was afraid to just let it rise for a long time because of the taffy incident. Eventually after 6 hours I gave up, threw it down on a floured surface, scraped it into some semblance of a package and threw it into floured loaf pans, my guerrilla bannetons, and into the fridge. Tomorrow I'll probably toss one out into the Dutch oven and cook the other in the pan in the oven.

The KitchenAid mixer is ordered. And a bench scraper. Is it possible that I'm just not getting a thorough mix before stretch nd fold? Can I just do Rubaud instead of stretch and fold? Is there a better beginner recipe?

78% hydration is not a beginner's loaf, it's not even in the general vicinity of what a beginner should be baking.  It just boggles my mind that someone would purposely throw someone who can't swim in the deep water like that.  Why don't you try something like this instead? This is a bread that, in its many incarnations, people have been baking for close to two decades, all without having to coil, laminate, Rubaud, and scrape batter off their counters.

I know, right? I’m not a novice baker, just new to sourdough and it’s been 6 or so tries and so many videos to try and see what I’m doing wrong. That recipe looks good. I’ll try it next.

Hi, I practiced extensively baking that same recipe.  It actually isn’t that easy for a beginner, however, the bread does taste great.  One big mistake I was making initially that took me a couple of bakes to figure out was that I was adding more water than the recipe called for.  I was using the total water and then adding even more when adding the hold out water.  Once I figure that out and then reduced the total water to a lower hydration between 70-75%, thing went much better.  I’d say 78% hydration is very hard for new sourdough bakers, try the recipe again, changing the recipe so that your total hydration is around 70%, I think you’ll find that it works much better then you can gradually increase the hydration up and build on your successes and gain some confidence.

There is a 1 2 3 sourdough here on this site that many people start with, I believe it is a bit easier, however, if you just lower the hydration in the recipe you’ve tried, you’ll find it is much easier to deal with.

I cut the recipe down to 25% using Bakers percentages made it 70% hydration (+/- the 100% starter) and I can already see the difference. It looks much more like the videos I’m seeing showing techniques. It was already too thick to do the Rubaud really, and I’m one stretch and fold in and it’s wet, and a bit sticky, but it is sticking to itself and so much better. Thank you thank you thank you.

Ill keep practicing with mini loafs upping the % a bit at a time. I do love the taste, I just want to get the shading down.

Following this recepi rigorous can be a problem.
It depends on the strength of the flour how much water it can hold. An the humidity in your kitchen also plays a part.

Oh humidity. It wa so humid yesterday, and 100% humid and raining today.

Which may mean that you need to make significant adjustments. 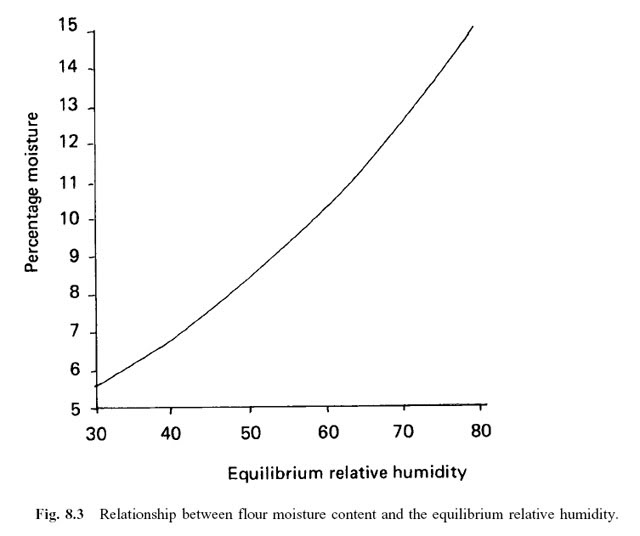 How do I use this? What is it showing? I can assume generally that if it's humid, my flour is already holding water and I should use less than the recipe calls for but am I reading this to say at my house's current 50% humidity (it's 88% outside) I use 3% less water? The difference between 8.5 percentage moisture and 5.5?

The flour comes out of the mill with 14% moisture, but if your local relative humidity is low, it will gradually dry out.  It's not going to happen instantly, but if the bag has sat around for a while, or has been opened you can expect it to get drier.  To give you an example - I have sealed bag of Italian flour on the shelf that is supposed to weigh 1 kg net.  In fact, it weighs 992 g with the bag, so unless the miller has no fear of the authorities, the conclusion I have to draw is that some moisture has been lost.

The bottom line is,  I would not necessarily necessarily go "Oh, my relative humidity is 40% today, so I need to crank my hydration up by 8-9%",  but it gives you a sense of the direction in which things are going.

Yes and where  Maurizio live it is almost a dessert.

I was pretty much a beginner when I took a crack at it. I remember having a tough time shaping due to the high hydration and my unskilled hands and I think I got huge bubbles in the crumb of the end product. But I never got a pancake or door stop.

I may have gotten a B&T proof box after a short while and this may have helped. Along with better mixing and "watching the dough" to get an optimal bulk ferment. I live in Seattle which is a pretty wet and cool climate save for the summer which is Mediterranean after July 4.

I've never used a Kitchen Aid stand mixer for this recipe or for any other bread save for pizza dough. But it won't go to waste. It's a versatile appliance. A bench scraper is a definite must have.

So I got a pretty good loaf the time I had to reshape after cold proofing. There was a bit of gumminess where the old crust ended up inside the loaf but it had decent spring, great taste, crisp crust and soft inside, and I even got an ear.

The loaf that I clearly overworked, knocking all the gas out every 30 minutes when trying to get more gas in, still has a decent taste, but got a very fine crumb. I think I'll use the KitchenAid just a bit for maybe autolyse and first knead, but the experimental 73% loaf gave me a little more confidence. I can hardly wait until 9pm when I can pull it out of the fridge and bake. I think getting the 1/2 half 6" Cambro will help me visualize rise better. Each hour of bulk fermentation it's getting a little slacker, but still sticks to itself more than to me. We will have to see if that happens at 75% and 78%.

All that said, I only had to throw out my very first loaf. It was tasty the first night, but then you needed to microwave it to get it soft enough to eat, and I just tossed it.

Looking forward to the restaurant supply store too. I can get a real razor instead of using my fish knife. And a larger bread knife. And. And. And. That place has alway been dangerous for me.

Look at wiremonkey.com for a gee whiz bread lame. Learned about it from the Proof Bread videos on youtube. I have one on its way to me. 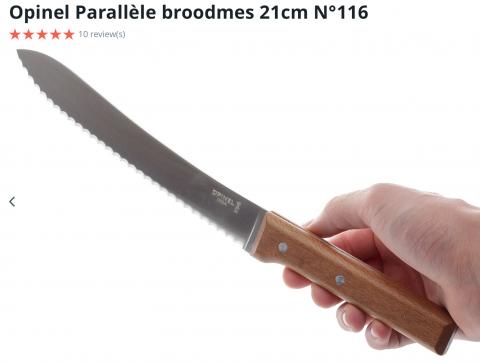 The perfect loaf Beginner sourdough builds a levain from 37g starter and 74g flour mix like the bread mix and one of the numbers they report is "prefermented flour" of 7.5%

I'm playing with this recipe, making it 73% hydration and I had 50g of starter already so didn't build a smaller levain. How much does "prefermented flour" percentage affect breads?  I'm sure there's a good reason to use a levain instead of freshly fed starter. Is it to let the yeast get used to eating the new flour blend?

By the way, I'm starting a chemistry lab notebook in my bullet journal to track this all. 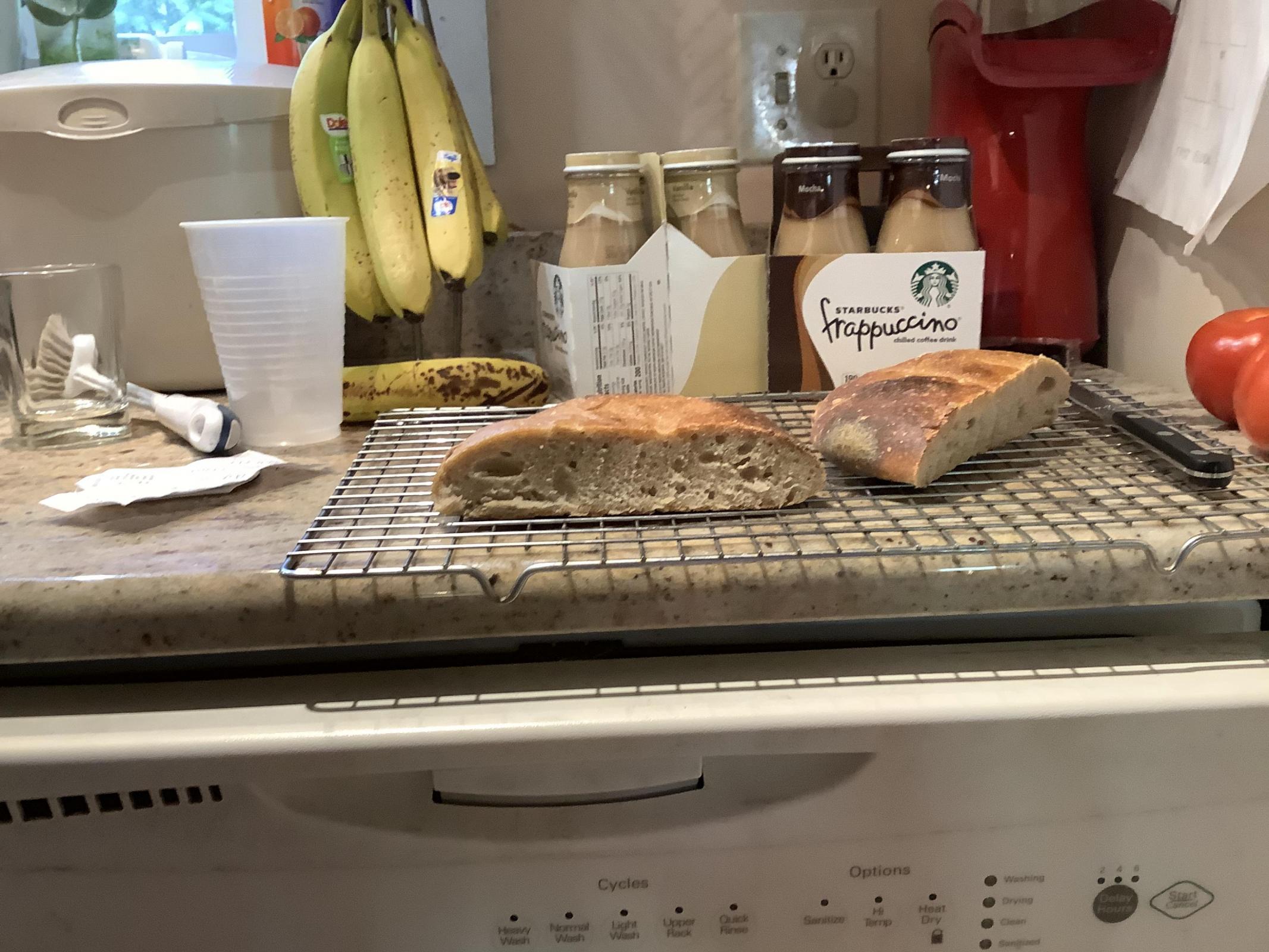 Hello, I'm newbie
ISO ROFCO B40
What happened here?
Hello from West Virginia
Does a starter made with whole wheat take longer...
END_OF_DOCUMENT_TOKEN_TO_BE_REPLACED