Should it or shouldn't it

Should it or shouldn't it

Although I have been making bread etc more years than I care to remember I have a question.

I always like my loaves baked in pans to have that deep expansion place just under the crust like this of James beard  bread pictured from here in T F L.  Should it look like this or should it be how can I say 'closed'.  qahtan 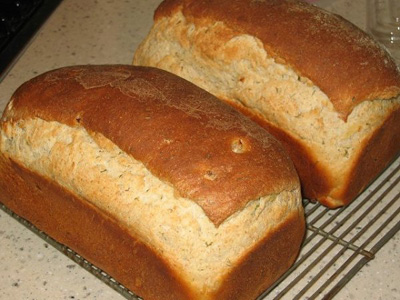 it just begs to be eaten.  It's caught in ACTION!

Actually like it both ways as long as it tastes good.

Now if this was a frankfurter sausage, and it split while boiling, it would not taste as good as one that is all plump just ready to burst, some of the flavour would be lost bursting into the water.  Don't think that applies to bread though.  I think they are yummy looking loaves.

Loaves bursting like this can be due to weak spots left when you form the loaf or to under-proofing.
David

This is really how I like my pan loaves to be.

This of course is another story. :-))  qahtan

I usually slash legthwise on pan loaves so they split in the middle and the sides stay intact but either way is fine, if your happy then that's what counts. You could try making a long knife cut on one of your next loaves and see how you like that, then decide. For the record, yours look just fine to me though!

will help minimize that big white gap.  (It's huge oven spring that's making that split.)  I think it's artistic looking, but there is a solution if you don't like it.  Also, with a longer proof, you might also want to put slightly less in the pan.  Now that I'm thinking as I'm typing, you might want to put say, 2 oz (I don't know that in grams--a palm-size amount) less in the pan, and proof it til it crests the pan just like with the regular amount.  If that helps a bit, you might want to use even less dough next time.  Also, I agree, slashing will help the situation.

Already been said by mike721 & staff of life - a lengthwise slash - not too deep - does prevent this.

Steam must escape from the exposed top of the loaf while baking regardless of whether you slash or not. This steam expansion produces oven spring.

Oven temperature may have an effect too. With a high initial oven temp, the crust forms earlier and prevents the escape of steam. The steam then forces this separation of the crust from the side that is shown in the first photo.

In the end, however, its a matter of aesthetics. Your choice whether you want to direct where it escapes or just see what happens during the bake. It doesn't affect the taste of the bread, so do whatever suits you.

Community Bake - Baguettes by Alfanso
First attempt with stone milled flour not...
Is this an underproofed loaf, and if so, why?
The Science of Sourdough: How Microbes Enabled a...
Potato experiment
END_OF_DOCUMENT_TOKEN_TO_BE_REPLACED