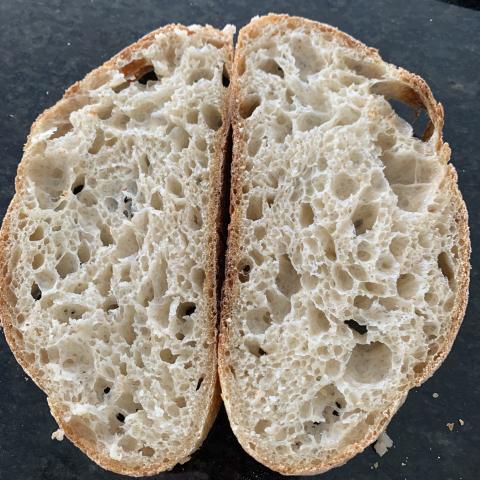 Just as well we have our starters!

So my isolation bubble shrunk a week ago when Swiss family members could finally catch a flight home.  So I baked last week, an ok bake but I am having trouble getting decent oven spring.  This week I thought, ok try the other flour, a different supermarket brand that a friend had dropped off. Secondly, have yet another go at baking in my hooded BBQ.

40 minute autolyse, dough seems a bit wet but I carried on added the levain and incorporated with about 30 SLAF.  It was wet (I should have expected that but in the past it hasn’t seemed so wet, so different flour has an effect).  After 100 SLAFs I added salt and did another 100 SLAFS. dough very extensible. 2 sets of coils at 40 minute intervals then 2 sets of Stretch and folds and I left dough to bulk ferment.  5 hours after mixing dough had risen 50% so I did a fairly firm preshape but it was still very extensible!  25 minutes later I did my normal batard shaping and could see it would spread like mad, so I redid it, this time using the stitching method.  -  ah, thats better! Placed in banneton seam side down - first time for me. Half an hour on bench then into the fridge over night.

I followed the above method but did 4 sets of coil folds. Dough was extensible but more manageable.

This morning, cranked up my BBQ,preheated it for half an hour. then added boiling water to the two old tin cans I had earlier placed in BBQ filled with lava rocks.  carried on preheating for another 30 minutes.  Both loaves were removed from fridge when I turned on BBQ so that they could warm up.

Once hood temperature was 250° and terracotta stones were hot I unmoulded dough, spritzed with water and placed both in BBQ.  Added some more boiling water to lava rocks and baked loaves for 30 minutes.  The BBQ seems to cook a bit differently and dough rises more slowly than in the oven in a DO.  After 30 minutes I rotated loaves and changed their position in the BBQ.  Another 15 minutes and loaves were light brown.  would love to get them darker but for now its ok. 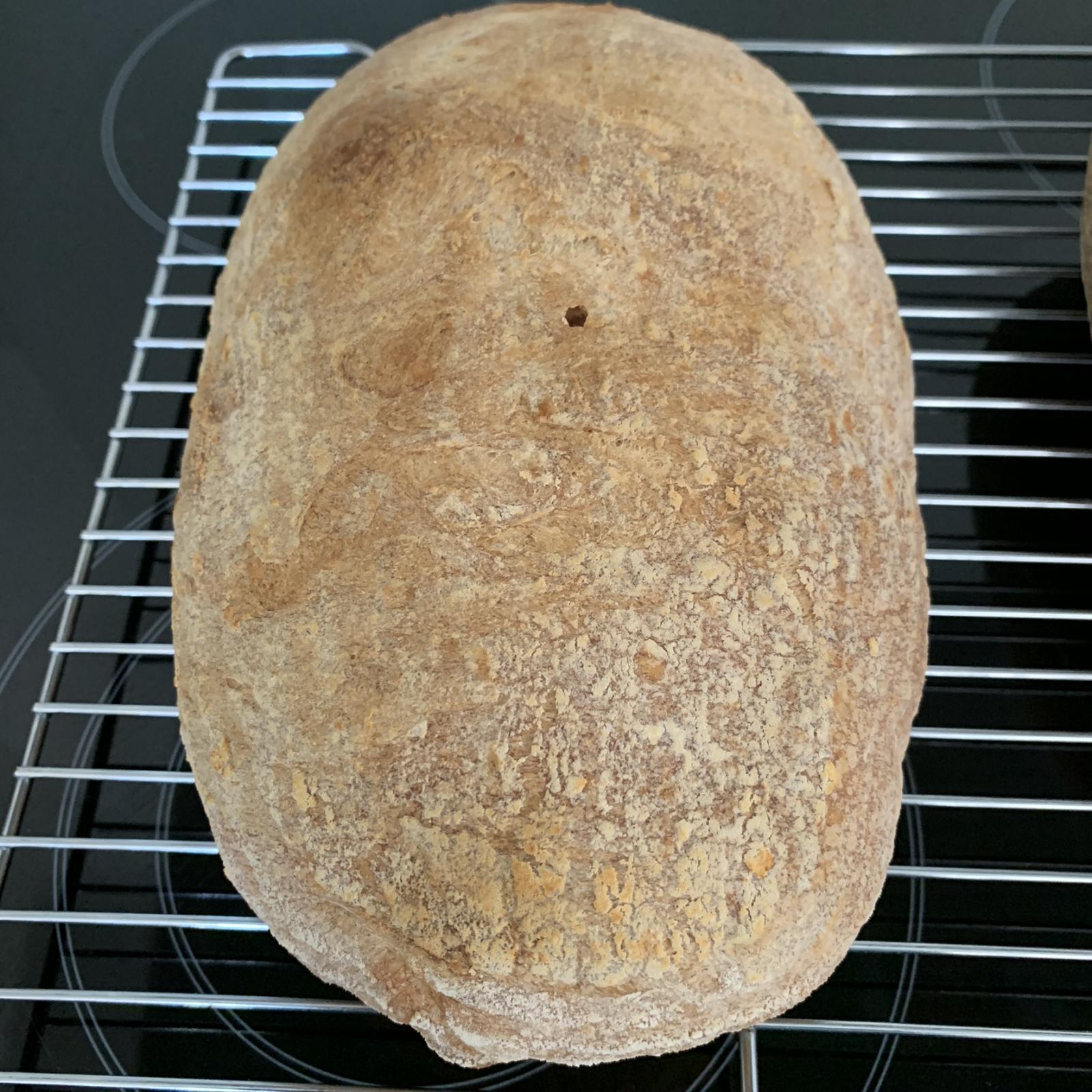 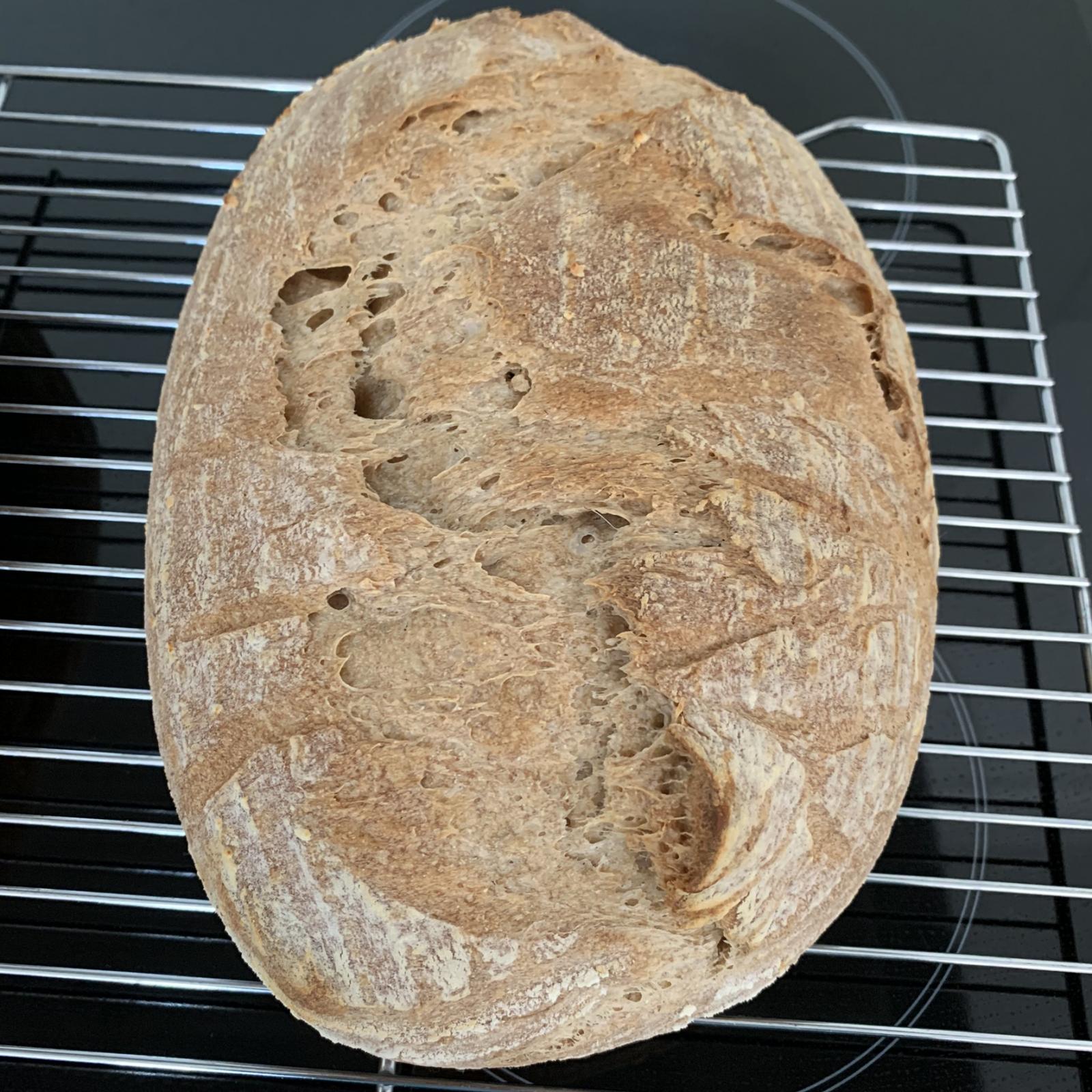 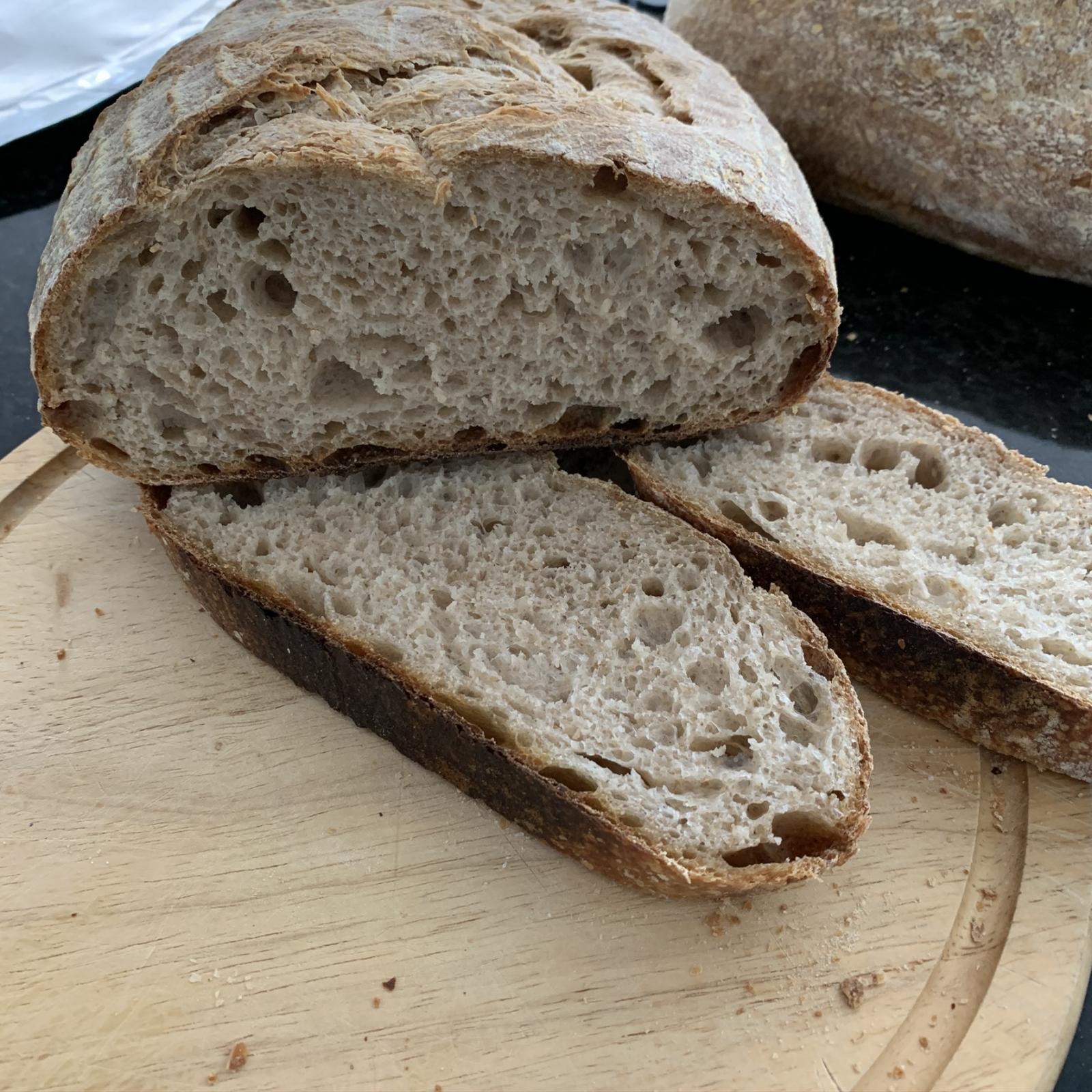 I still got a little singeing but I can liveit it. 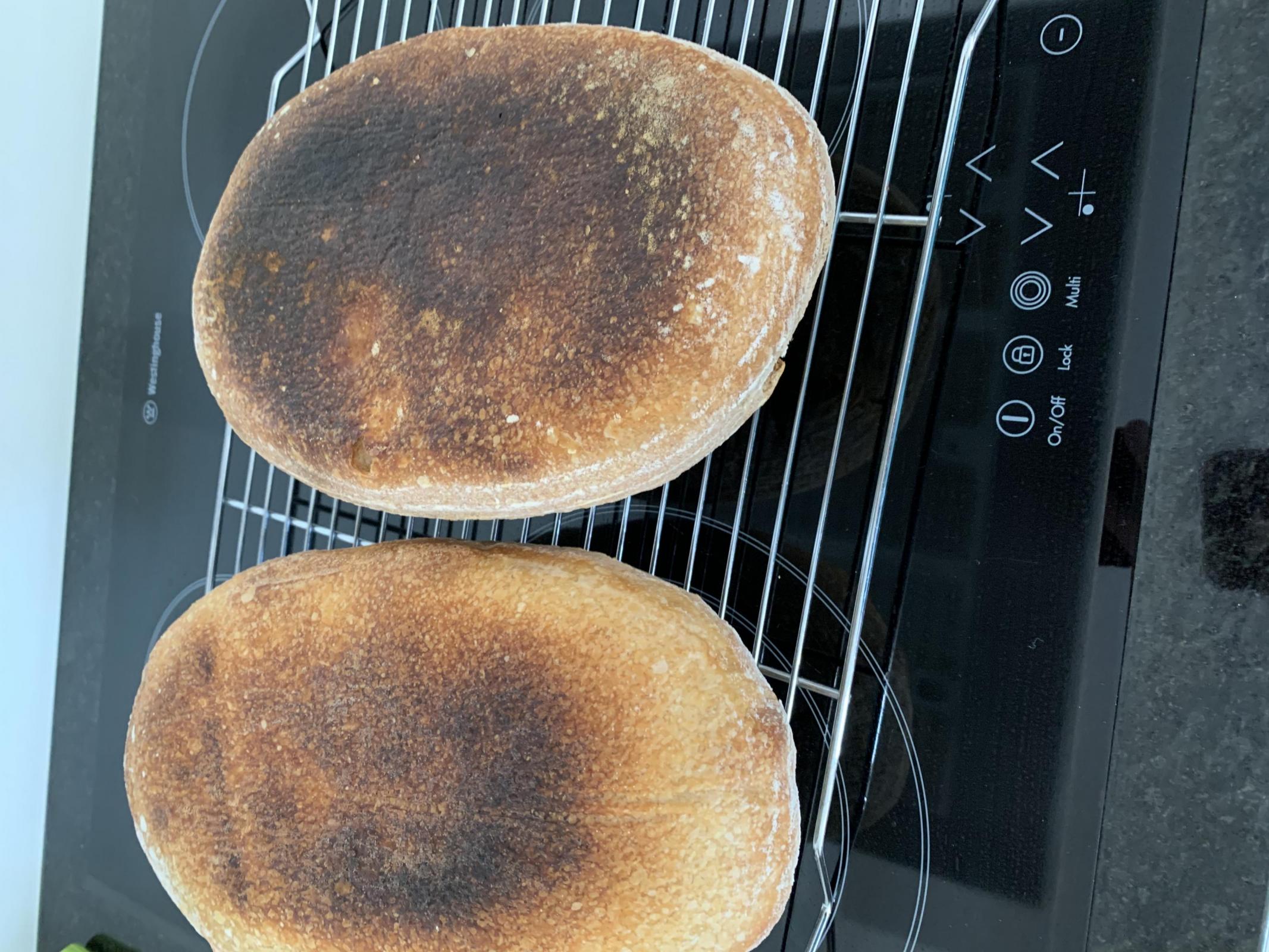 think I will change my flour going forward! much better bake today!

Hope you are keeping room in your freezer.  The flour and yeast shortage thing is quite a phenomenon.  Not as dire as TP, but nonetheless...

We are witnessing from whence the flour shortage arises with all of the new folks on TFL asking a lot of the same basic questions that so many before them have.  Only now it is all at once.  Once the supply chains resume to normalcy and everyone realizes that they bought 500 too many rolls of TP and 200 too many kilos of flour, we'll be back to normal. At least in that one aspect.

My suspicion is that there are now a lot of folks buying flour to make cakes, pancakes and biscuits for their anxious and hungry  stay at home children and spouses.

as lately I seemed to have lost the ability to get a nice crumb.  The dough has been spreading so profile has been much flatter and crumb less open.  I have all sorts of bits of flour in the freezer but not a big supply of bread flour so hopefully soon folks will realise they don’t need so much and leave some on the shelf for others!  my fall back position will be to mill wheat berries and sieve out the bran but I have no idea. of the protein % in the wheat berries.  maybe I should try that just in case... :)

your bakes look great as always.  I haven’t been very active recently, so there are lots of new folk on TFL but good to see familiar faces too.

That’s a very nice crumb you got there!
As to bread flour, Hubby had gotten me a 20kg bag before this all started and I still have some from the previous bag. So I’m fine for flour for now. We did have to hunt though for the neighbours. I told my daughter, who does the shopping for us and them, that I would willingly share if she couldn’t find any but she did find one bag at the back of a shelf.

would be like this!  I really felt as if I have turned a corner because all recent bakes have just not been, in my opinion, up to scratch, very edible yes but crumb wise no.  I made your European Peasant bread last week and that wasn't right either.  So maybe the flour I have been using is partly at fault. I don't know, just really happy with this bake.

Glad you are all safe and well, take care

Leslie, that looks quite amazing for a bake in a BBQ.  Those look better than some of mine baked in the oven with flour that I am used to using.  I’d be happy with that crumb.  We are seeing flour shortages here as well, at least in the supermarkets.  Some other less travelled sources that I usually buy from still have stock fortunately.

here that still have flour, but they are some distance away so not really sensible.  I am trying not to add to the load of the couriers & truck drivers so will stick to local supply, and hope it gets better.

Yes I am really happy with the crumb although I must say initially I thought it was going to be pancakes all round.  Although I have tried stitching the dough as final shaping before I didn't think I did it properly but this dough (the kamut one) was just so extensible that I felt I had to do that.  It was also a contributing factor in deciding to proof seam side down so I didn't have to score the dough!

Hi Leslie - such a long time since I've been on TFL. You amaze me - not sure I'd have the guts to bake on my bbq. It's true - flour has been difficult to get. But you manage to pull it off everytime! Stay well and safe!

this summer has been so hot and my new home doesn’t seem to cool as quickly.  It is a whole different beast and as I had no experience using gas I was pretty scared to start with.  the crumb was really nice on this bake so my next challenge will be the crust colour.  I have bought Malt (like we used to get as kids) and will put a teaspoon of it in my next bake and see what happens.  I was after powder but in our lockdown you just take what you can get 😆

bake happy Sharon, hope you and your family are all safe and well

I continue to offer this to folks with overly brown bottoms on their loaves, and most people can adapt it to their particular situation:

You need a little higher thermal resistance between the heat source (BBQ in your case) and the bottom of the surface the bread is baked on (tile in your case).

The best solution I have found for that is to take some heavy duty oven foil that is somewhat larger than your tiles and crumple it up and then carefully unfold it while leaving lots of crinkles in it.  Layer at least two and perhaps more sheets between the rack and the tile and see what it does for you.  If your tile has a high Cp value, is thick, and has a high thermal conductivity, it will store more heat than you need to cook and brown the bottom even with the foil in place.  If that is your case, you need a thinner tile or a lower density tile so that it stores less heat.  If the tile has a low thermal resistance, then the extra insulation will keep the heat from getting to the bread as fast as it does now.  It is all in the thermal balance.

but next summer I will try again. I have several tiles that have cracked so will need to look at all that again.  your suggestion sounds good to me so maybe in the spring I can try what you have suggested. Pale breads are really lacking in character.  I will come back to this post again, thank you