Is this damaging my dough? Slap and fold technique...

Is this damaging my dough? Slap and fold technique... 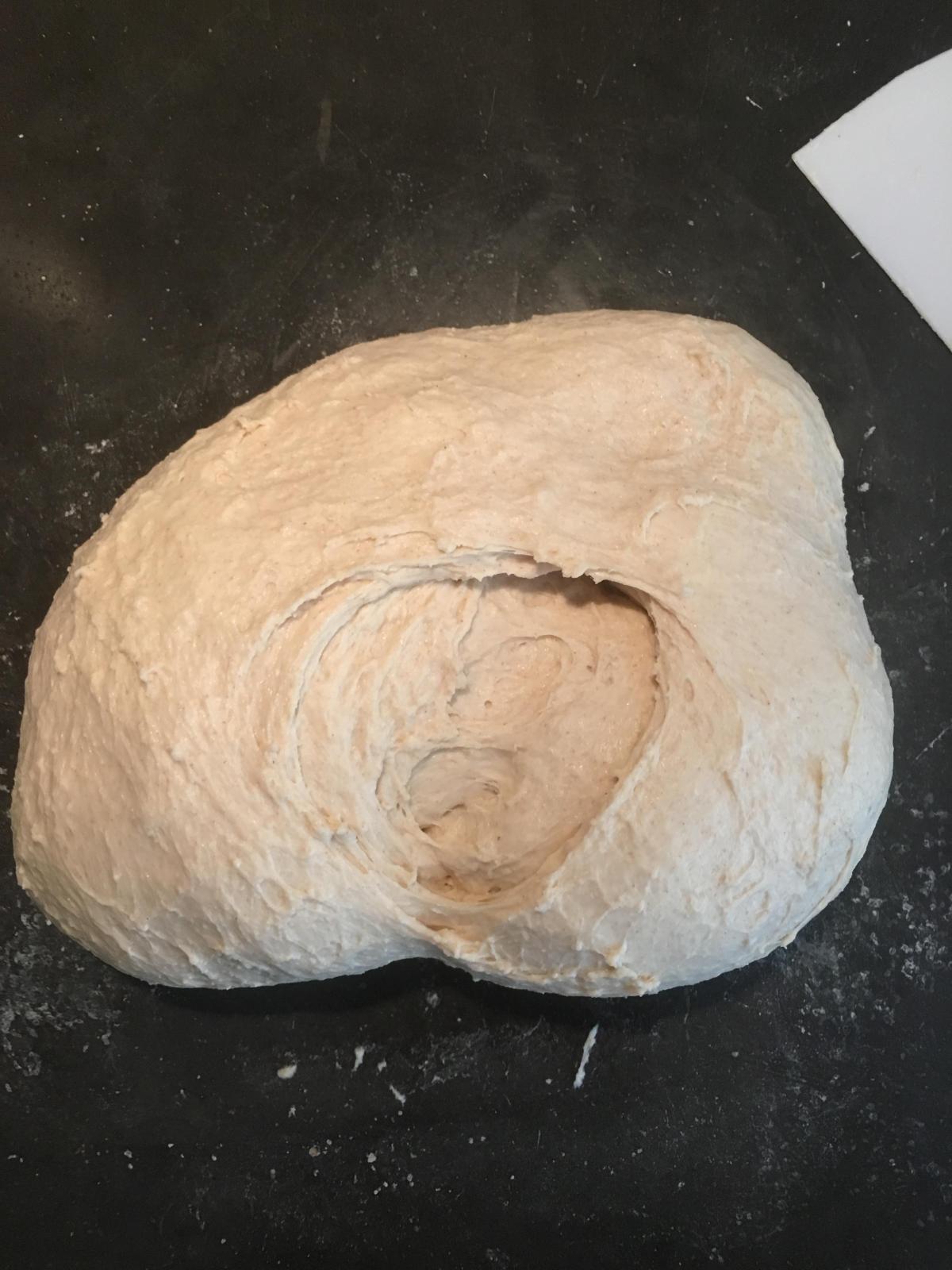 I knead my dough mostly with slap and fold. Here is a dough with 75% hidration (with sourdough starter). It's 80 white and 20% less white flour.

I mainly slap and fold for approx. 10 minutes, with a 1-2 rests of 1 minute. I'm slap and folding pretty fast, I've been doing it for more then a year now, but I have a feeling I have a fault in my technique...

After some time I see that dough sometimes starts to break (look picture). I'm not sure what is happening. Am I too aggresive?

Thanks for any thoughts.

It is counter-productive to break the gluten structure with too much kneading. My advice to you is to try my technique as shown in the video. you do that twice, 30 minutes and 60 minutes after mixing the dough and that's it. The dough in the video is 85% hydration 70% whole grain and the resulting bread's shape is fantastic.

Thanks Dan, I also do strech and fold, about 2-4 times, depends. It's not as much whole grain - my bread - so hidration is not that high.

OK, "over kneading" might not be a good term to use since there are so many resources attaching different meaning to that term. Instead, we can say that we can clearly see a local damage to the dough. So even if the dough as a whole is not yet fully developed, this particular spot experienced stress that it did not like. In my experience, such local damage may never heal properly. You should try to avoid this kind of damage also in later handling - like when pre-shaping and shaping. This is why I think a gentle kneading method may be better. I experienced a lot and found that the dough really does not need a lot of handling to create the structure needed for the bread.It mostly needs the resting time to develop the gluten by itself, and the gentle movements to arrange the dough nicely. Hope this is helpful...

Have no fear about damaging the gluten. You'll break before it will with manual mixing.

You have a very resistant dough. I'm wondering if your sourdough starter is used at a high percentage, above 25%?

BreadO, it is normal for the dough to look like your image at some point in slap and fold. This should take place fairly early in the process. This is expected when I slap and fold early on, then shortly there after (while continued slap and folds) the dough will quickly come back together. Is this something you are experiencing? Like Michael mentioned, the hydration may be a little dry, considering the whole wheat. Maybe, maybe not.

How long into the slap and folds when the picture was taken?

Exact same thing when I used slap and fold. It never really seemed to affect my results. It did bother me and I tried different things to stop it but I wasn’t successful.

Sorry, forgot about my post for a day :)
So... Wilson what do you mean high percentage starter?

I'm not sure how long was I doing my slap and folds, for at least a few minutes... It seems that after some time it gets rather strong and if I push it it breakes in two.

I'm not sure if this happened to me often before, I don't remember it in such an explicit way, and the bread still comes out ok, I just don't want to make any bigger mistakes, I love gluten and want it to be abundant.

I'm aware that destroying gluten by overkneading by hand is almost impossible, and I'm sure this is not happening with my dough.

I also noticed that my white flour I got last time can take more water without being too runny and sticky.

I'll make another bread today again, maybe will even post video if it happens again.

How much starter is used relative to the flour in the recipe?

Please tell us how it is fed (existing starter, flour and water), how long it ferments and at what temperature before adding to your main dough and how much you use? The more we know the better..

I was wondering about the formulation since acids in the starter strongly influence the properties of gluten.

At first glance, I'd guess your dough was underhydrated.   A little more water, and a little more time could make it more extensible so it doesn't tear during the rough-handling of slap and folds.

Hmmm.. OK, I'll try to asnwer your question about starter but I'm not sure couse I did not measure it :S

So the starter is fed with 90% white and 10% rye flour and same amount of water. The starter is mostly in fridge, I put it out the night before making a bread and feed it, then it gets fed one more time in the morning and then back into the fridge.

In the morning I take a starter which will go into dough. For this I put a big spoon of starter and 30g of white flour and 30g of water. It's hard to specify, I would have to weigh it one time but don't do that anymore.

Then after it's combined it's slap and fold time. After that it rests with a few strecth and folds 2-4, depends of how many times I remember to do it. It sits in my room till the evening when it gets preshaped, shaped and goes into the fridge. After 12-20 hours (depends on when I remember to bake it) it goes into oven. Then I eat it. Then it's all over again.

PS I would agree this one was probably underhydrated.