Believe it or not, a virgin, brand new starter made bread in 3 days. It took 72 hours from the initial mixing of the rye and water to removing the baked bread from the oven. If I were you I wouldn’t believe this either.

My former starter seemed to lack the vigor it once had, so I decided to build a new starter. 50 grams of organic rye berries were ground and to that 75 grams of water was stirred in. The fermentation temperature throughout the starter and levain builds were kept from 81-83F. Rye was only used for the initial mix, after that the culture was fed white flour. The second feed took place after about 36 hours and the hydration was lowered to 100% and remained there for the rest of the 72 hour duration. 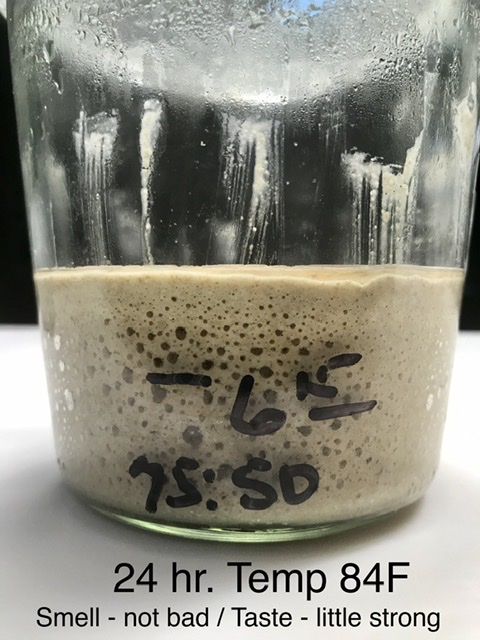 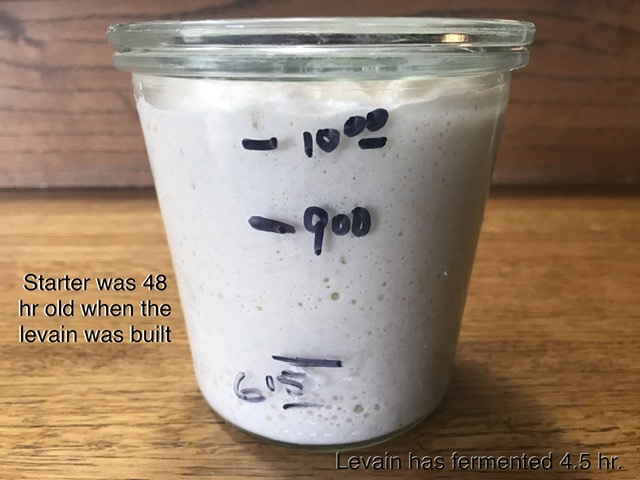 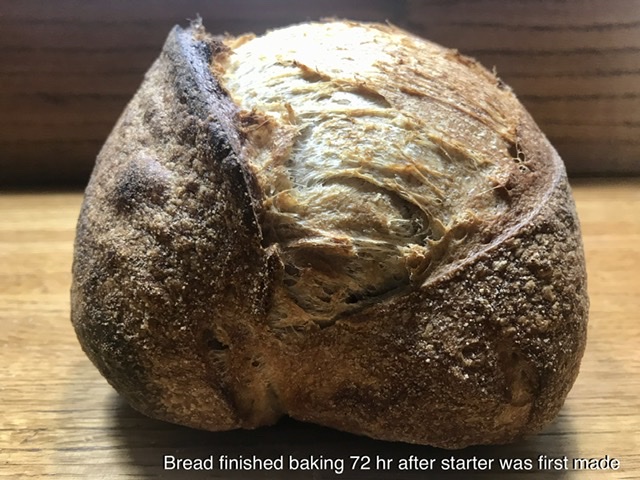 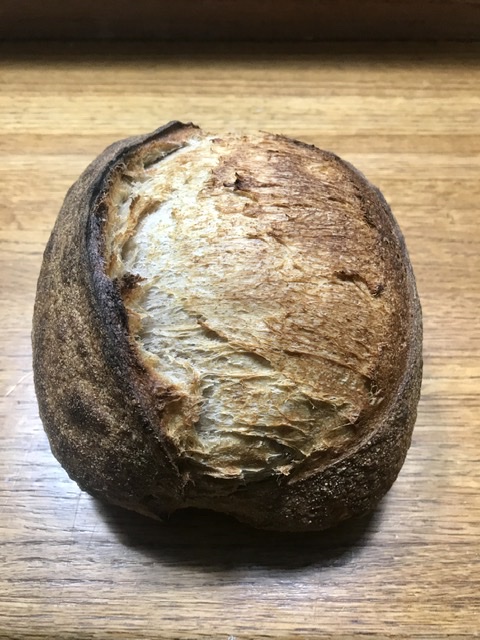 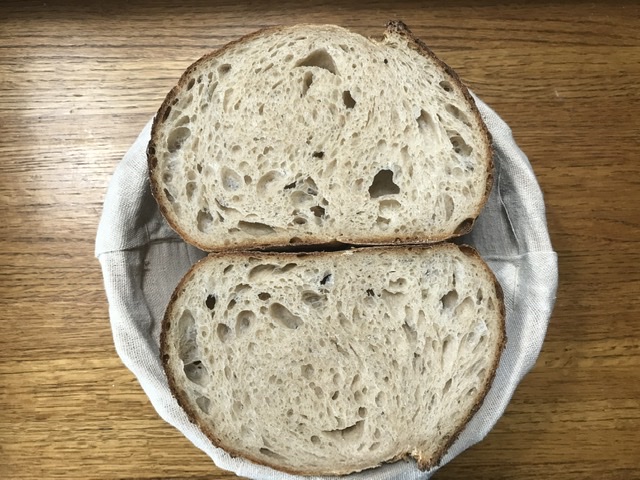 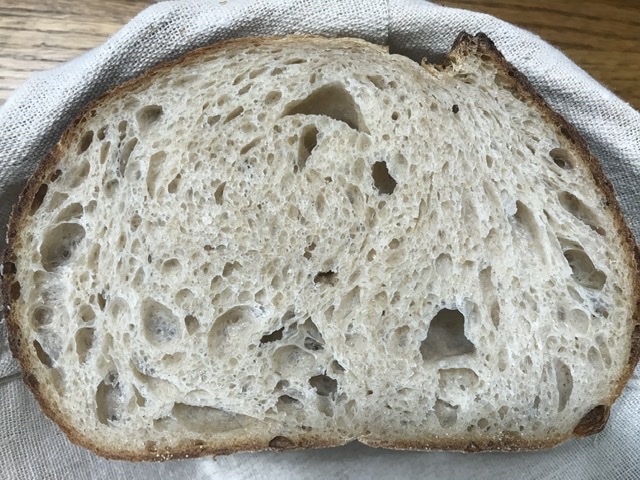 The bread was sliced 9 hours after baking. The flavor was typical of this type of bread. I can taste the distinct flavor of sourdough, but I think the yeast in the starter was mature but the LAB will continue to gain complexity with time - just my thought...

Here is a copy of my notes and the corresponding timeline. 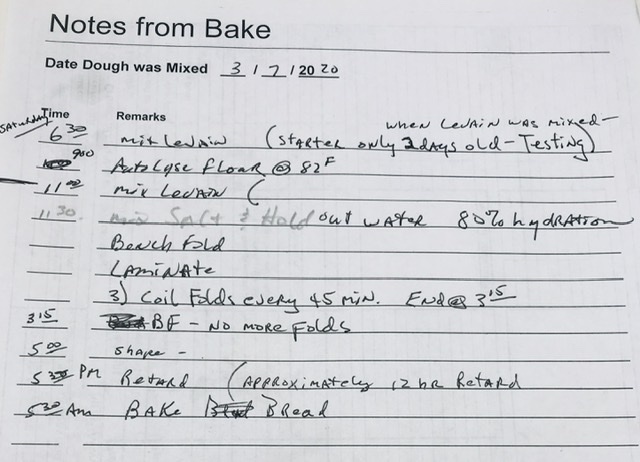 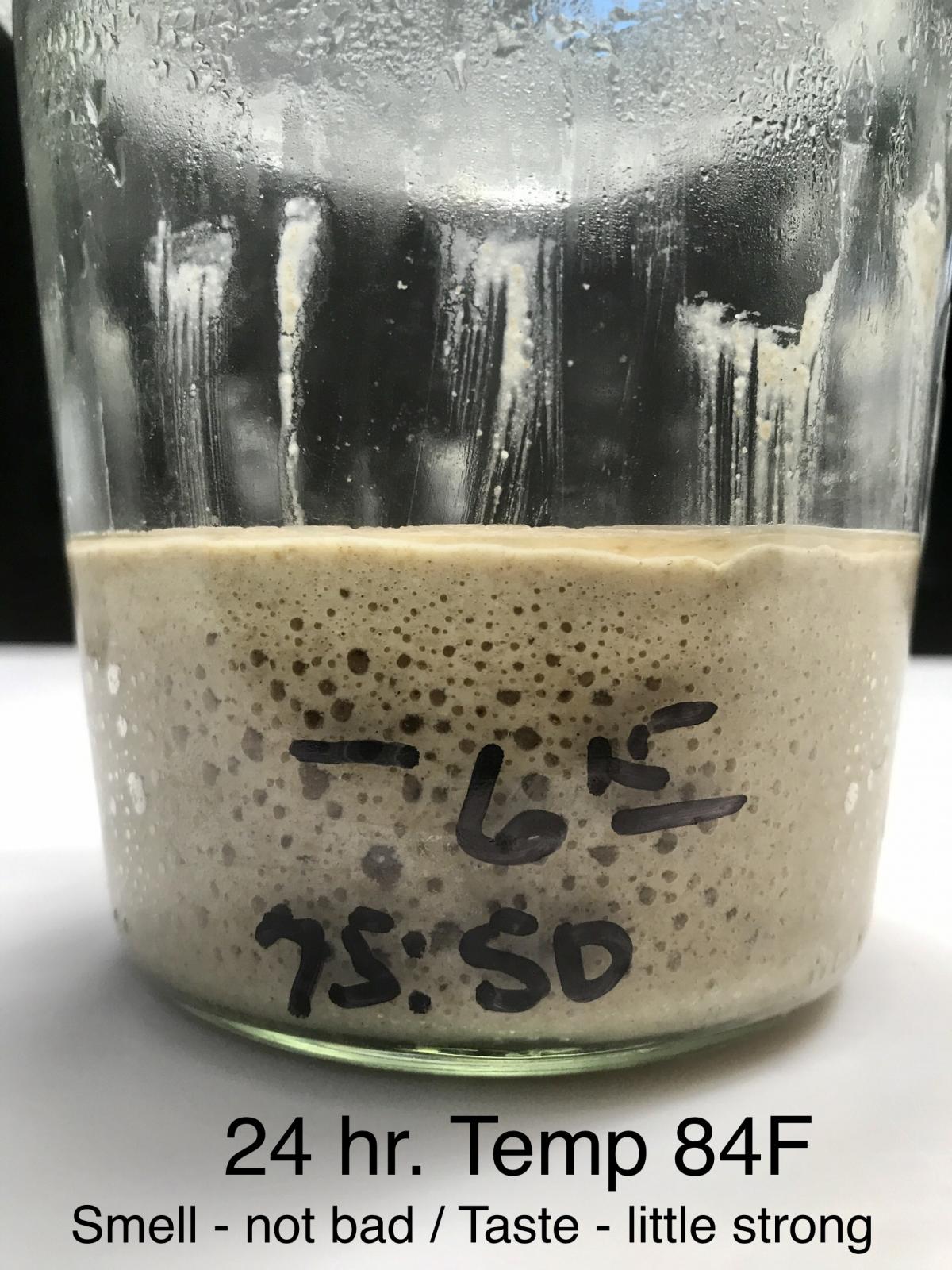 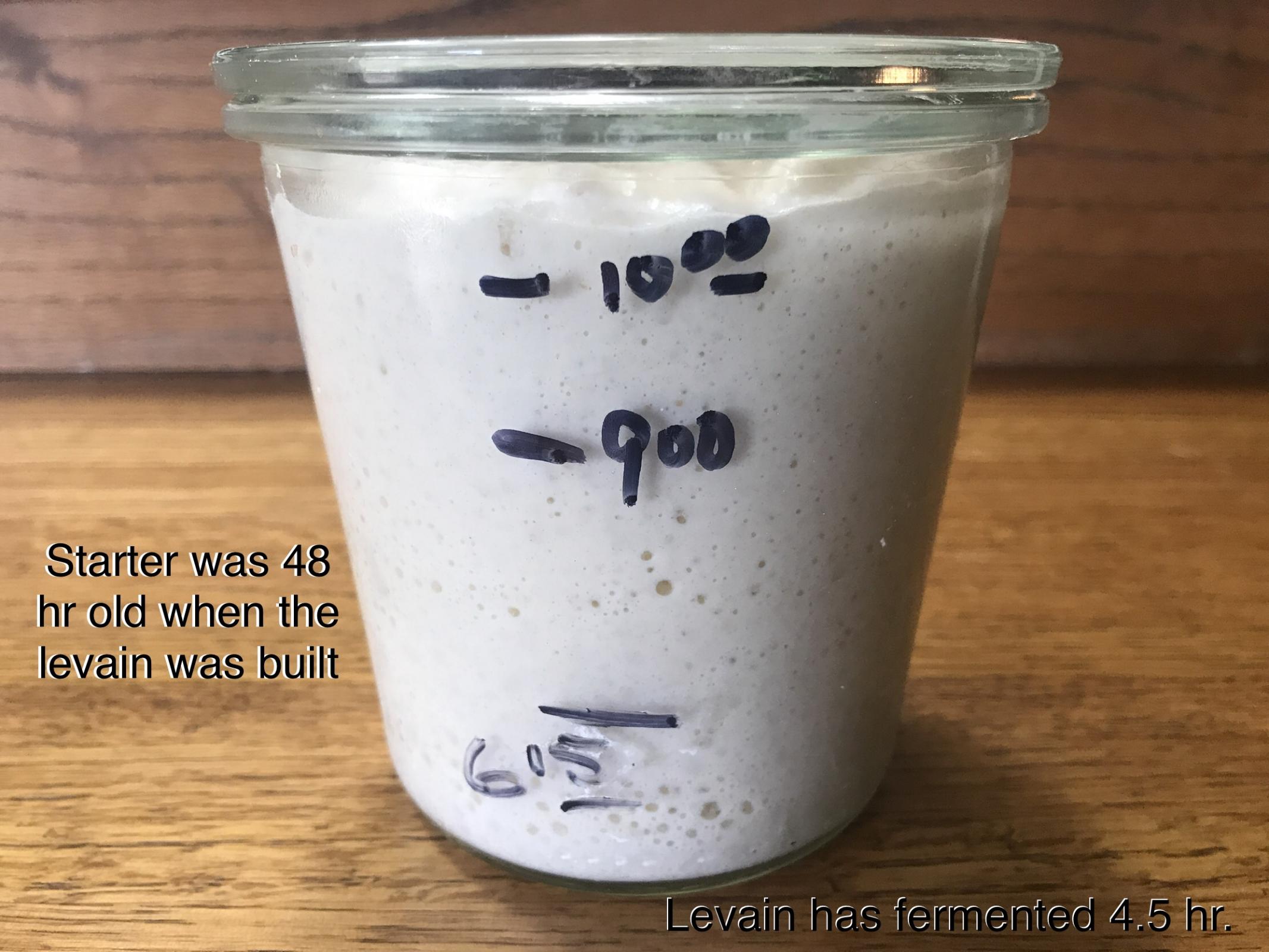 *.   At 5:30 Saturday afternoon the dough has been shaped and put into banneton. It is retarded @ 38F overnight*.  Around 5:30am Sunday morning the bread is baked.

We know so much today, only to learn tomorrow that some of what we knew we knew, was wrong. Forever a student, always open to learn yesterday’s erroneous “facts”.

UPDATE - After only a week or less from the bake above, the starter quieted down a bite. It started to rise on the same schedule and at the same height as my other starter. It confirms my belief that starter of various origins will become alike if they are fed the same flour and maintained in the identical environment. See THIS LINK to read more about this thought.

The wild yeast that live in your kitchen moved into their new home quickly, found a job and went to work. Does it have that new car smell? The bread looks great. May your new starter live long and prosper.

MT, I am presently emailing Doc.Dough and a couple of other users. We are all mystified! A sample will be mailed to Doc for testing. We are attempting to test in order to rule out any unknown possibilities.

It’s difficult to believe that a starter that was first made only 48 hr prior, could be used to build a a super strong and active levain that would be used 4.5 hours later to produce the type of bread and crumb pictured above.

At this time the starter is not very sour, but the bread seemed to have that distinct sd flavor.

Rye is great for starting a starter. Even better that you milled it yourself! Rye ferments fast as it is amylase rich and so it often has a very low falling number. Your temperature control is consistent and the peak optimum for yeast growth.

One of my first attempts at making a starter 12+ years ago was just like this (100% rye). It doubled in volume in about 1-2 hours. No Luconostoc stink and I made bread from it within a similar time-frame just as you have done here. The bread had no sourness also.

Thanks for the confirmation, Michael!

The only other explanation we could come up with was contamination from CY, but it seemed super unlikely. The bread also fermented  in the time frame that I would expect from SD.

You mentioned your initial bread wasn’t sour. It appears the yeast have matured quickly. I would imagine I should expect the LAB to develop over time. Is it common for Rye to produce yeast first, and then the LAB later?

The starter is often quadrupling.

LAB and yeast will already be there. No sourness doesn't equal no LAB. There will always be LAB!

I speculate that the yeasts in play now are probably those suited to brewing, meaning they are not so acid tolerant. I can't substantiate that however. It is just a THEORY.

Please have a look a this paper:

It describes spontaneous fermentation of rye flour over 72 hours.

Thanks for the link, Michael.

For those interested in reading the pertinent information that Michael referenced go to page 89. The article covers many topics dealing with foods and is very long. The title of the specific article is, “ CHARACTERIZATION OF RYE SOURDOUGH MICROFLORA”

It is interesting and highly technical information.

I'm with MT on this. You constantly bake.  Your kitchen, perhaps your whole house, must be saturated with yeast spores.  So, my speculation is that this would not have happened in the kitchen of someone who has not baked, or who seldom bakes with just commercial yeast.

I have heard that for years, but I’m not fully convinced. The starter is mixed and then a latex glove is fitted on the top of the jar and placed into the proofer to ferment. How are the spores affecting the starter in any real way? 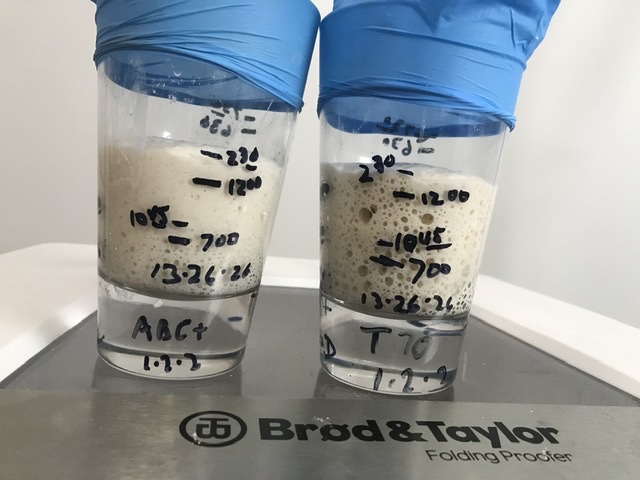 Granted, those whole rye berries came with a lot of their own wild yeast and bacteria.

Great news, and I’m really pleased to hear you got it started so quickly. Much quicker than I managed... “jealous: moi?!”  :-)

Scientific opinion seems to be unanimous in the view that the microbes in SD starter come from the flour source - specifically from spores of organisms that live naturally on the outer layers of the grain. Spores floating around in the kitchen are not really so likely - although baker’s hands might be.

The only mild note of caution I’d sound at this point is whether such an early burst of activity corresponds to yeast, or to a gas producing bacterium such as leuconostoc ... it reminds me of the trials carried out by Debra Winks, as described in the outstanding post: http://www.thefreshloaf.com/node/10856/pineapple-juice-solution-part-1. Of course, you might have sidestepped that stage by acidifying the starter to suppress such interlopers :)

All the best, M

Hi Martin. I was concerned about the early activity as being Leuconostoc in nature, but the starter never had a foul smell or taste. Yep, I taste my starters.

I didn't use Debra’s Pineapple Solution because my starters seldom (only once) have the bad bacteria problem.

Judging the outcome of the loaf and the taste of the bread, I can say for sure that the bad bacteria didn’t plague me.

4 days and 8 hours since inception the starter has just over quadrupled in rise in 5 hours at 82F. I know because I measure the actual volume of the glass. See image below.

The original level is carefully marked and so is the high water mark. Once the glass is empty the glass is tared on an accurate scale. In this case the water weight was 84 grams. Then to that amount of water an additional 84g of water is added. A “2x” marker is added, the another 84g and so on and so forth. 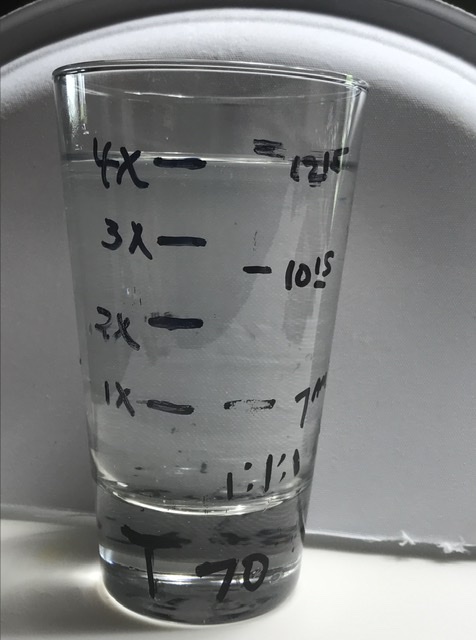 Yeah - you can’t mistake that leuconostoc smell, can you?! Reminds me of when I had to keep my starter in the garage for a couple of weeks because my wife wouldn’t allow it in the house heh heh...  oh lah

This is mindblowing! After accidentally drowning my starter in soapy water during an intended container transfer I've had to start over and am currently on day ~4 of the pineapple juice method.

I have the rye berries and proofer box and will give your method a go and see if I can't get back on track sooner. Thanks for sharing!

Bready, since you have a proofer, the very beat thing you can do for your future starter is ferment warm. 80-82F would be great.

Also don’t feed the starter until it is ready. Stirring it once or twice a day is a good thing, especially if it hasn’t started to bubble. Wait to feed until the starter has risen as high as it will go and once it just begins to recede. That is the best time to give it more flour and water. Probably best to refresh 1 part starter + 1 part water + 1 part flour.

Don’t consider the starter above as a normal experience. For reasons unknown to me I got to be part a freak experience. The stars aligned and I guess I got lucky. Be patient and let to your starter dictate what it wants and needs.

Wow Dan, that is incredible and goes against what new sourdough bakers are typically advised.  But the proof is that beautiful bread you baked with that new starter.

I am in contact with Doc.Dough, Tom, aka OurCrumb, and Abe. The only other explanation that comes to mind is somehow commercial yeast inadvertently invaded the starter. I don’t see this happening, but want to rule it out. The actual bread didn’t have that “clean” CY flavor that is different from SD. But with results aa startling as this 2 day old starter (used to build a levain), testing is in order.

A sample of the starter is on it’s way to Doc. He will do some testing.

This starter is quadrupling. Today I’ll be mixing an Affordable. It will use a 0.3% CY kicker. I am hoping to duplicate the flavor of the last bake. The flavor was by far the best WW I’ve ever tasted. Will report on the CB.

Doc has done quite a bit of testing on this starter. From what he writes me, it seems fine.

it can happen.  It is just not everyone has the perfect set up conditions and therefore most starters take longer.

I think this post from Abe is relevant to this discussion: TFL://58556/what-say-you

Maybe you got a great batch of rye.  Post the info on the package and we can compare to other fast starters this season.

I bought a 50 pound bad a couple of years ago from Bread Beckers. The information on the berries is very limited.