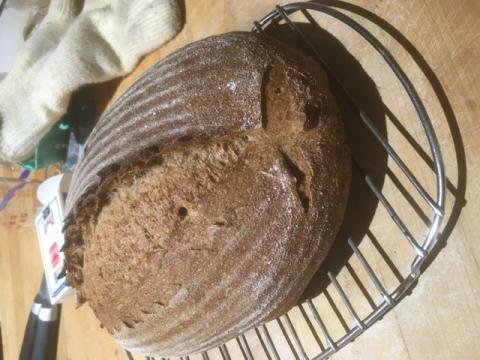 I bought some Glenn wheat berries from Kenter Canyon farm at the Atwater Village farmers market ( in Los Angeles). It was $2 per pound, not cheap but not too outrageous. The Glenn wheat is grown in Santa Rosa, California. I’m currently buying hard red spring wheat from Montana Flour and Grains by mail, and I would like to transition to a more local supplier.

I milled it and baked my typical loaf- sourdough, 100% whole grain, no additives besides salt. The starter is rye and comprised 10% of the grain. The other 90% was the Glenn wheat ( replacing the montana hard red spring wheat). The hydration of the loaf was 80%. 2% salt.

Impressions- the flour held up well to fermentation with sourdough. The final crumb was softer than the Montana loaf is typically. Probably lower gluten, but strong enough to get a nice enough profile with the usual treatment. Excellent aroma including malty notes. I have been adding spelt to my wheat loaves to reduce the chewiness of the hard red spring loaves, and I’d say the Glenn loaf is an excellent texture alone.

Here is a crumb picture

Have you ordered from kgbakerysupply,com in Petaluma, or directly from centralmilling.com in Utah?  What do you think of their line-up of grains?

centralmilling has prices and quality similar to Montana Grains. In both cases, the shipping more than doubles the price. Centralmilling does have some interesting varieties. I've tried the emmer as an accent grain as well as the hard red spring wheat. Have not tried kgbakerysupply. My goal is to stop paying for shipping and shop 'local'. I quote 'local' because Kenter Farm is really in central Ca, but they send trucks down to several Los Angeles area farmers markets weekly, so it is local enough ;-).

Do you bake 100% ww loaves? What farm is your favorite supplier?

I was hoping that KGBS-Petaluma could ship to you  from Petaluma and it would be cheaper than Utah-to-you.  I assume that they use company trucks or commercial freight to ship cheaply from Utah to Petaluma, which gets it "mostly" to you, so the UPS charge for the final leg to you would be more reasonable.

I home-mill and my favorite  wheat is Prairie Gold, hard white spring wheat, from Wheat Montana, www.wheatmontana.com. (Similar name but different outfit than your supplier.)

I once bought a 45 pound pail as part of a group order of over 4,000 pounds direct from the farm/mill.

Since then, I buy it from CLNF.org in Michigan, as part of a local buyers club, minimum group order total is $400 or $450, and they deliver to the group coordinator, with their company truck on a regular route through the Midwest. No, or only a nominal, ship/handling fee, depends on the route. My group currently pays no extra for s/h, just the price on their web site.

Prairie Gold is also carried by an Amish bulk/discount store, E&S Sales, in Shipshewana Indiana, and I bought a 50 pound bag there once, on a day trip to Amish country.

I also went through a 45 pound pail of spelt from Wheat Montana, but I was not impressed. It sat sealed in the pail for 8 years after I bought it, so it may have been too old.  The berries were notably soft.  When I unsealed the pail, there were some berries in the sticky part of the seal, so maybe it was not a perfect seal.  The pail was not dated with date of harvest or date of packing, so I don't know how old it was when I bought it.  I did not pay enough attention when I opened it to tell if there was a "whoosh" indicating a good seal. But there was at least one oxygen aborber in it.

Next most used grain is Kamut, and bought 75 pounds (3 bags) on one group order through CLNF.  This was the cleanest healthiest wheat I ever purchased in the berry. (I hand sort 1/4 cup at a time before milling.)  And it's cheaper than any durum I can get shipped to me. So I use it as durum for flatbreads.

I've purchased various small amounts  of Bronze CHief berries, Hard Red Spring Wheat and like it.  I have an unopened 45 pound pail from 2009. But as above, don't know year of harvest or date of packaging.  Will open that pretty soon, but need to re-seal, or give away, at least half since I don't use it quickly.

Have not played with Emmer or Einkorn.

Have milled whole yellow millet, but don't like it.

Have milled amaranth, and it adds a nice flavor as a very small percentage, 5%.

They have a "regular" (same extraction/ash as white flour) durum called "Desi Style".

Look up www.sherbrarmills.com, and if you call or email to get ash% or other tech specs, please share the info. It's not ontheir web site.  Their rep was unable to give me the numbers when I emailed.

So if you want to make durum, Pugliese, or Altamura bread, one of those two will work. There's likely a Patel's or other Indo-Pak store near you.  Durum is very popular among Indians for chapatis.  But not all "chapati flour" is 100% durum.  (If you look at Temple brand "Durum atta", the ingedients show added vitamins and bran, so it is "reconstituted" and may not be 100% whole grain.)