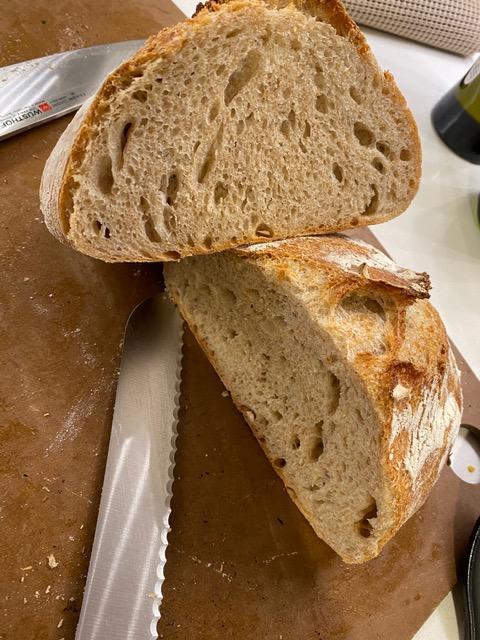 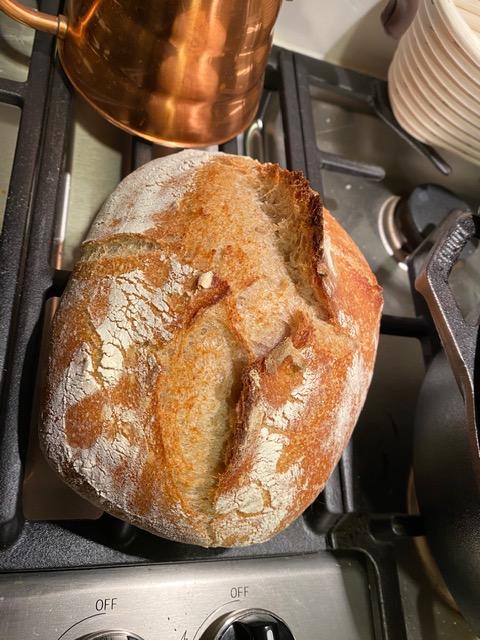 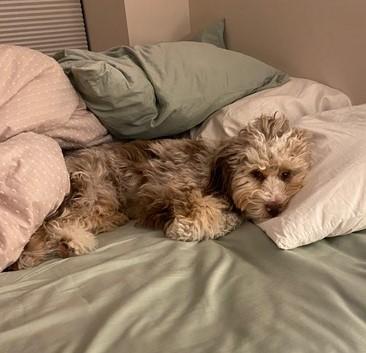 The bread looks excellent.  I'm sure he will get it tasting as good as yours in no time with your help.

His apprentice is adorable!

I hope you and your family had a great visit and an amazing holiday.

that later!  Mabel is the cutest thing.....smart a whip too.  We had a great time with everyone over the holidays, singing Hanukkah songs, lighting the candles looking for Hanukkah Joe followed by Christmas Carols and putting out cookies and milk for Santa!

Hp[-e your Holiday's were filled with love, joy and peace!  Best to you and yours in 2020 Ian!

Glad you had a great holiday.

I sent you a message, not sure if you saw it yet.

It's wise to start with a basic SD bread that's going to taste anything but ordinary. Can't say I'm entirely surprised though. With the guidance of his father-in-law and the help of apprentice Mabel, he's got a massive head start over the others!

Watch out for the amazing SIL, he might become a threat to you in no time! Get motivated and stop acting lazy :) Oh well, you still stand a chance if he fails to get Mabel out of bed.

dabrownman
January 8, 2020 - 9:27pm
My daughter said that the few loaves he made tasted OK

but were flat as a pancake.  His problem was that he had never seen what it was supposed to do, feel like and look like.  Hands on learning from someone who knows what they are doing is the key.  Doing it right one time is all it usually takes.  I would say '''how do you make a levain?  He would tell me.  Then I would say we are going to make a levain and tell him why we are doing what we are doing.  His first degree was in Microbiology for heavens sake - just like my daughter's and how they met in college!  I would say how do you do an autolyse?  Then I would show him.  I would say how do you do slap and folds and he would show me then I would show him a few ways how to do them and then let him do them right - with a 71 % hydration dough and then with a 78% really wet dough.  Same with stretch and folds.  We did every kind of kneading, stretch and folds, coiling what ever manipulation there is, pinching too.... anything I could think of with the dough for that first half hour after the autolyse and mixing in the levain and salt.  He said 'well we ruined that dough' and I said naw ....you can pretty much do what ever you want the first half hour - even a full half hour of old fashioned kneading and the dough won't care much because it is too stupid to know any better.  Showing him for a few seconds and then letting him do it was all it took.  Once he saw what 80%, 90% and 95% proof looked like, he was really seeing what he was doing wrong.  He's got it now for sure.  I told him all he had to do is make 500 different breads over the next 5 years and he should pretty much have it all figured out:-)  He is way past me already.  I'm only 1/4 the man I used to be  and he is in tip top military shape!  I told him just think what you could be doing bread wise when your're my age!  Same with you!  He does smoke a good brisket to go with the white bread already too!  He's not into curing meats yet but we'll get there:-)

That Mabel is pretty active.  He takes her for a 4 mile run now that she is old enough not to get hurt.  Doesn't even phase her but she sleeps well.  She just loves it and it keeps her from being crazy in that tiny condo they have.  She is one great dog and we just love her!

He learnt from a great teacher. Is that his first loaf?

starting to get bummed out.  He's a good kid like someone else I know so far, far away!  It finally clicked for him though.  Now he is really hooked!