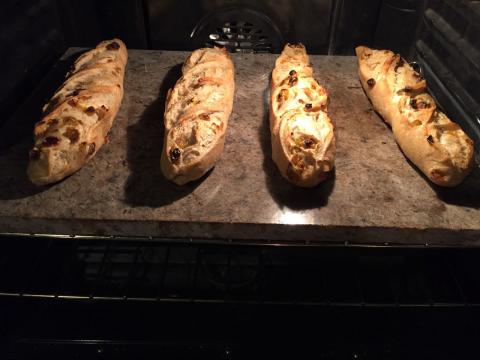 It’s been so long since I made this bread that I forgot how delightful it is.  My initial go-to instinct was to build a 125% AP levain and then run a most reliable Hamelman Vermont SD.  This, after waltzing with Maurizio’s Cinnamon Raisin SD baguettes and my Sesame Semolina baguettes.  Intermixed with learning the tricks of the trade re: croissants, pain au chocolate, pain aux raisins and some cinnamon buns with raisins and walnuts.  Still work to be done on all fronts there.

However, time to return to something more simple.  Until, with visions of golden raisins dancing in my head, I decided to return to the pain au levain with WW and then add raisins to it.   I had already built my 125% levain and was ready to go when I had this revelation.  And then noticed that the Hamelman formula calls for a 60% hydration levain.  I altered the hydration of the levain in the formula sheet to match my now bubbly 125% concoction, printed off the formula and was on my way.  Along with the addition of 20% golden raisins.

The raisins make this somewhat dessert-like, and the crust has a good snap to it.  It will make superb fresh bread as well as superior toast - either with a soft cheese like Brie or with the morning butter.

Although I’ve published this twice before here and here, as there were two mods to the formula I decided to put three on a match. 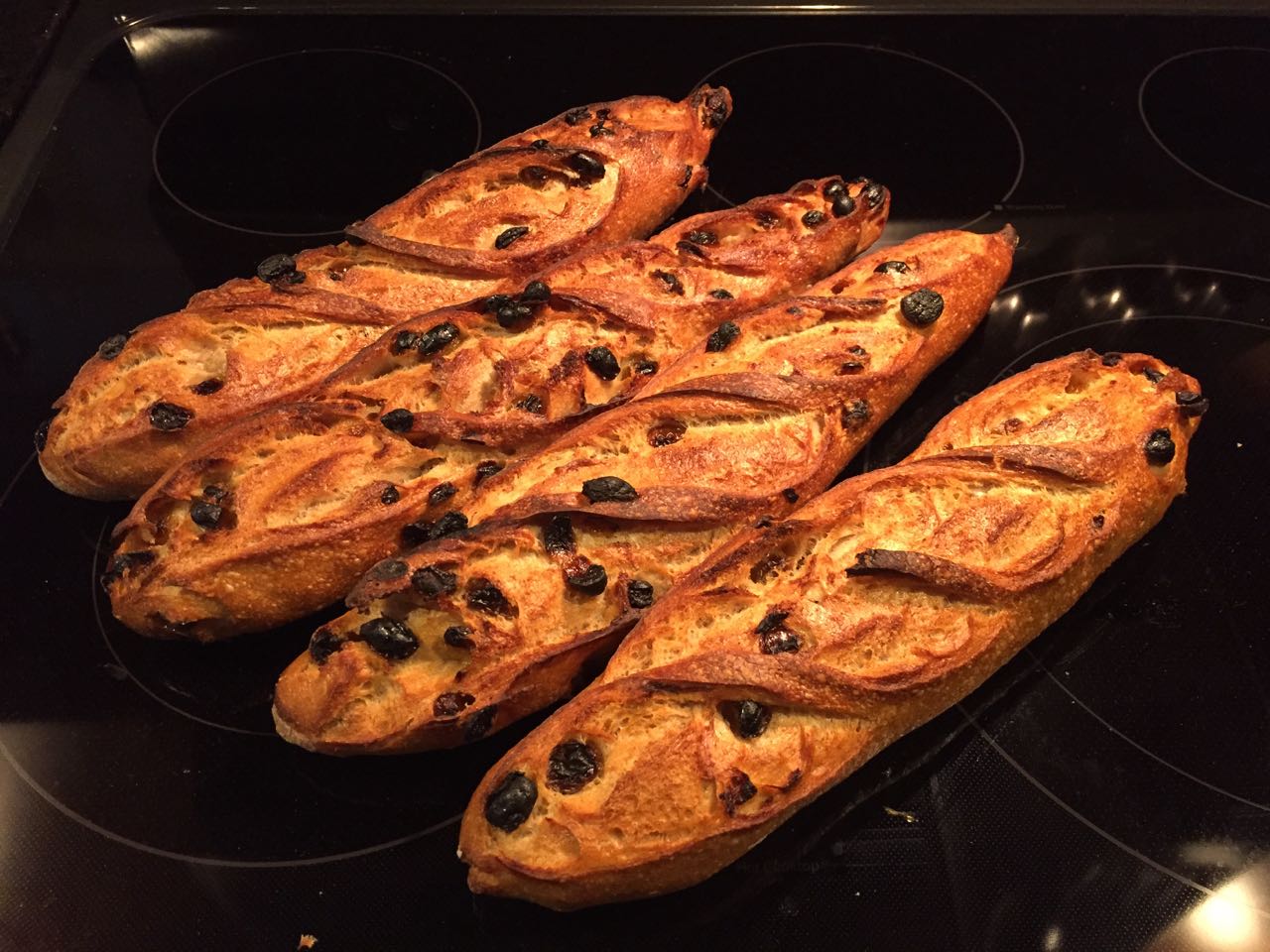 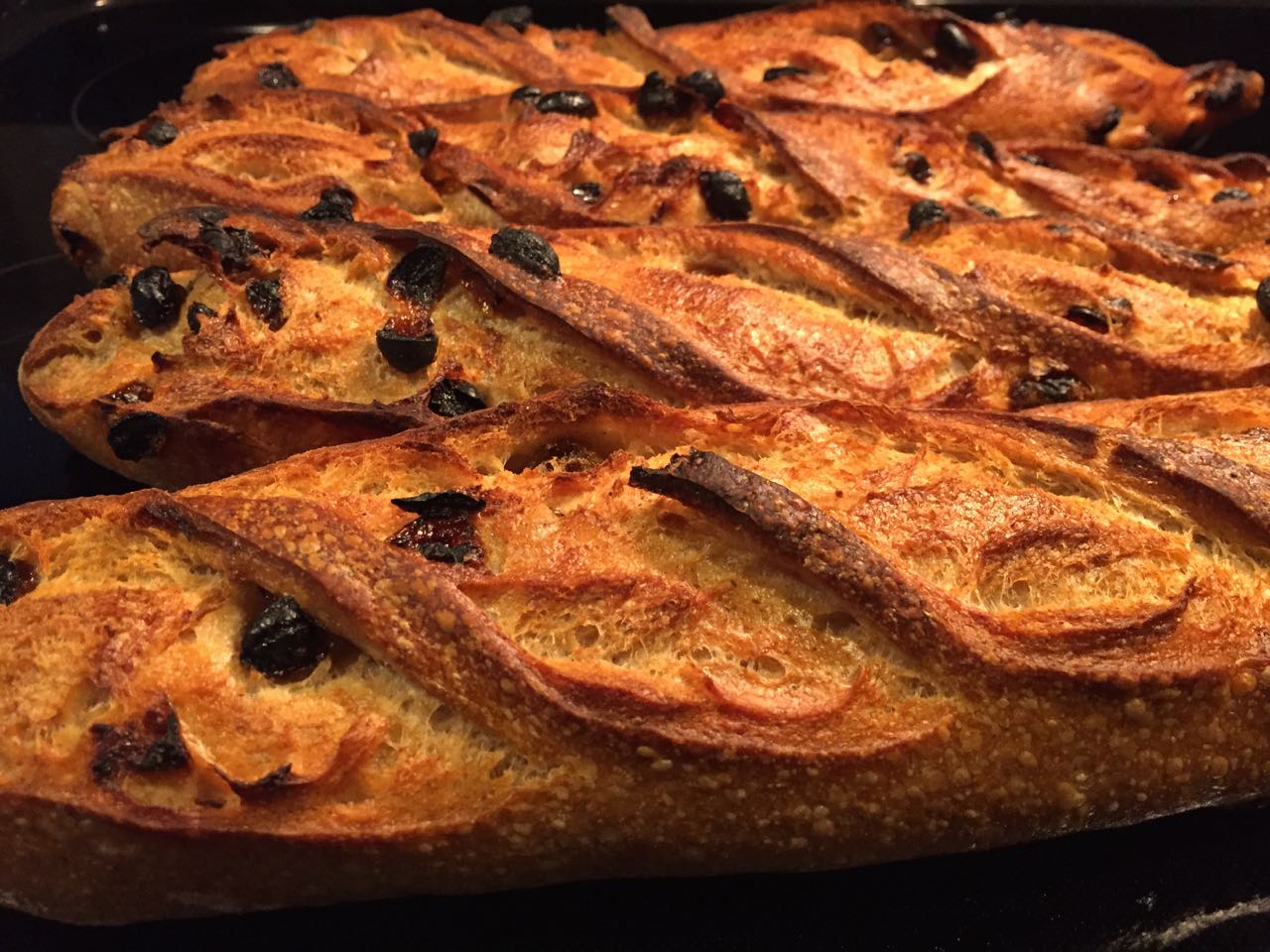 Those loaves are stunning. I am sure they taste even better than they look, which is saying something. Bravo!

Yes, very tasty, but lagging a length behind in the flavor department of Maurizio's cinnamon-raisin bread that I've made a few times.  That one really is dessert-like.

My short holiday bread made way for richer pastries and viennoiseries. I also miss baking simple breads too, perhaps a nice way to start the new year?

Love your viennoiseries from last time, they look so great!

Works in Progress.  And even though I have a small warehouse of the pastry flour right now, I think that the over-fed holiday season dictates me taking a short break from the richness of each of those.  This afternoon's project is to coax some flour and water into becoming a ciabatta for this evening and lunchtime soiree tomorrow.

Those look beautimous, Ian.  And I imagine they taste as good as they look.

as tasty as the aforementioned Maurizio version with  cinnamon and more WW.

These look awesome. Nice work all round.

Well, since Paul complimented me on your bake 😜 I guess it's only fair I give credit where it's due!

Nice bake as usual.  One of these days you will have to post one of your failures so we know you are human!

you would have known!

As for failure, it is true that they are few and far between these days, but I too attended the Baking School of Hard Knocks.  I keep a handful of these photos around to remind me, and folks like you, that I started off the same way as most others here.  Attention to detail, minor changes on iterations, follow the "rules", start simple and move toward the more difficult, do-overs, and stick-to-it-iveness.  But I'm preaching to the choir here.

So for your amusement and entertainment, here are two early birds.  The baguettes, if you want to call them that, speak for themselves.  And the ciabatta, although lovely in shape, is a spelunker's dream come true. 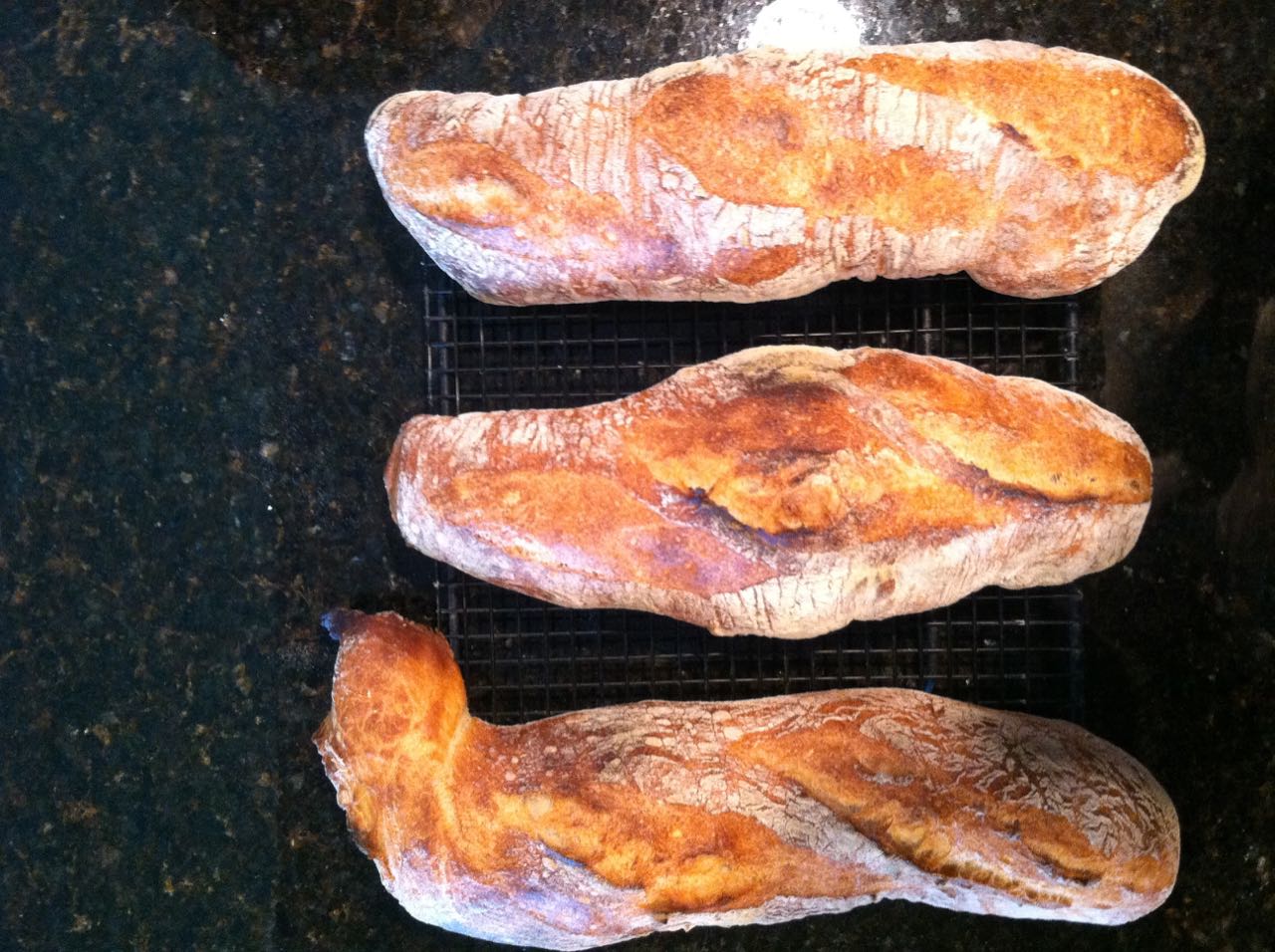 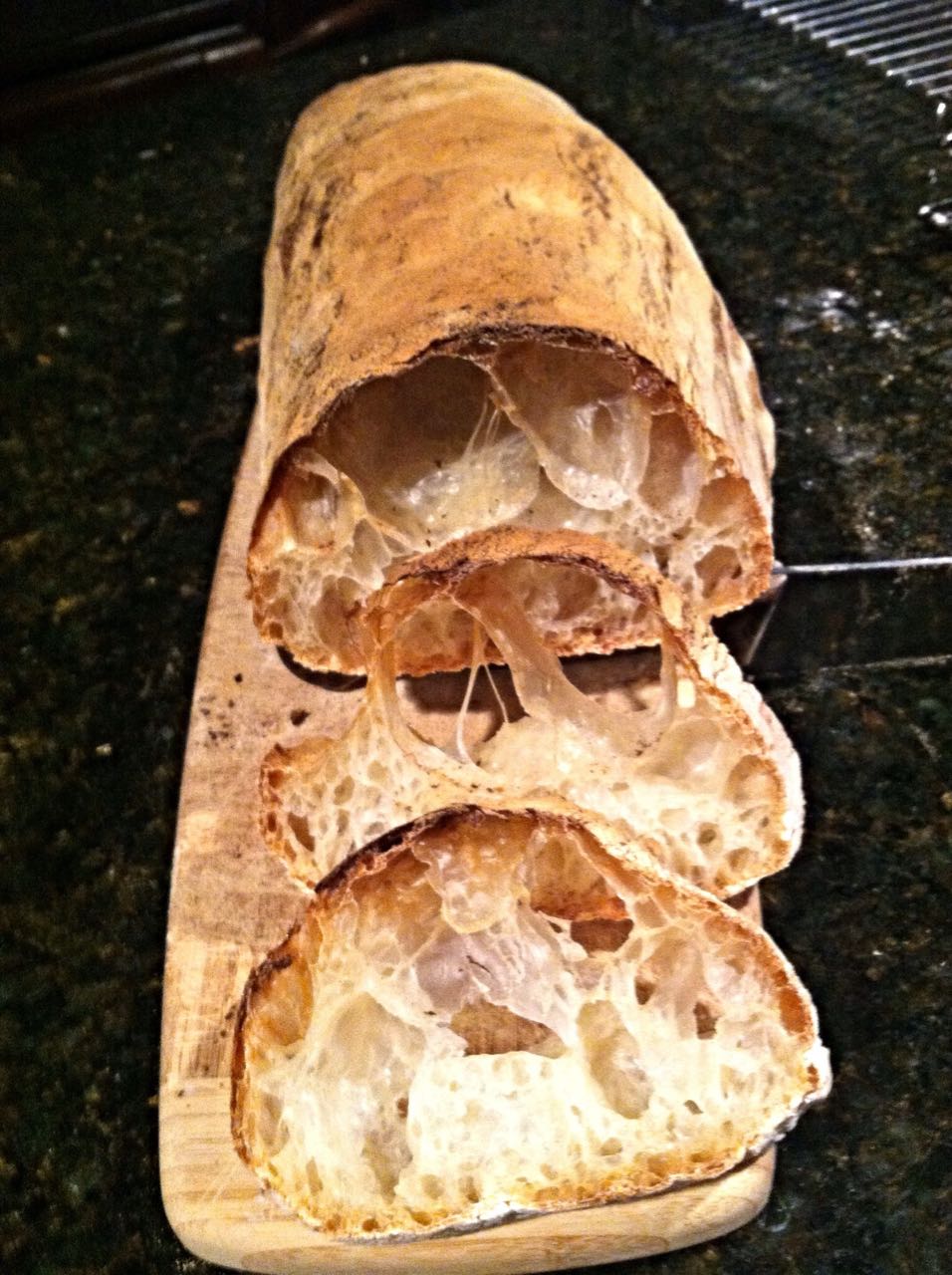 Thanks.  I should have more dignity than to attach my name to these, but here goes...

“Sometimes you get the bear, sometimes the bear gets you.”

ALAN: The loaves in the original post of this thread are gorgeous.

IAN: No more of this stolen valor stuff, Bub.  I'll be watching you.

See, my caps lock key does work even if my brain sometimes serves up the wrong thing.

unfortunately kinda disappeared about the time that I started up and discovered TFL.  I understand that she was a wonderful and ongoing resource on these pages.  And if I recall without doing a search, she was right in there with David and Janedo on the collaborative side of trying to figure out the wonders of Anis Bouabsa's baguettes.  And that was the exact bread where I found my calling and concentrated on until my first success in my TFL toddler days.

There'll seemingly always be new faces and voices to fill the void, and I understand that people pull back for this reason or that reason.  Nonetheless, it is a shame to lose some of the early TFL pioneers who contributed so richly to the site.

In my job as a coordinator of software releases, I ran or attended a few cross team meetings daily.  Summarizing the meetings and subsequently e-mailing them to a rather large audience was a daily part of the work.  As a ploy to get the recipients to at least open the emails I began each summary with some usually amusing quote or other (I found out it worked!).

To address proth5's disappearance on TFL, I'm reminded of one of my favorites -

Charles DeGaulle: "The graveyards are filled with indispensable men".

A lesson learned when myself, wife, my brother and her bother retired from "important" positions and never once received a call for help or clarification that we were all sure were coming our way.   Or maybe it meant that our turnover was just dandy.

I'll take compliments where ever I can get them 🤫

Nice to see you are only part cyborg 😜.  I still get the occasional dud, usually when I'm rushing around too much and not paying attention.  The last semi-disaster happened when I tried to bake rolls the same time as a loaf and I had the top shelf too close to the shelf with the loaf on it.  The oven spring hit the shelf above and it was not a pretty sight!

alfanso
January 5, 2020 - 6:34am
If even the professionals make the occasional errors

how can we mere mortals ever be expected to not make them?  Shortly after moving to Portland and landing just blocks away from Ken's Artisan Bakery, it immediately became our go-to gluten resource.  Not long after, and already enamored with his breads, especially the Country Blonde batards, we took one home and it was nearly tasteless.  It turns out that the morning baker had neglected to add the salt, and nobody knew until after they were baked and sold.  I'm surprised that the more rapid bulk fermentation from the lack of salt wasn't noted.

I just screwed up one of my last bakes.  I switched out some of the BF for freshly ground purple corn and used dried cherries instead of fresh.  I didn't add more water like I should and the dough was very dense.  You would think I would know better by now, but that's what happens when I try and do 2 different recipes at the same time 😳.

You sure haven't lost your touch, even though you sadly lost your beloved apprentice.... Lucy misses her!

I like the way the raisins want to jump out of the dough! They are so well crafted all I can say is -  De'm be real good Baggies!

Now that I have slipped into a new fad of two drinks minimum of red wine a day, in my old age,  I need to be more cultured, and Frenchified Italian like you ...... have an apple or pear slice or two, some assortment of cheeses and a baguette with them.  Now, all I have to do is learn to make Baggies like Dan Baggs ....and carry all the time while doing it for protection from my lazy apprentice!  Well Lucy isn't as lazy as I am - but who is?

until mid November since we said goodbye to Castagna.  But back home now, sad and feeling like a part of me died along with her.  But they don't live forever, as you well know.

Getting itchy to keep baking this past month or so, and had some fine opportunities to do so, along with the laminated featurettes around here.  Mostly the tried and true.  Why?  Well, because we like them so much!

Have a ciabatta in bulk rise now for our lunch guest tomorrow.  And every time I make one I am reminded why I don't like using the mixer.   I feel lucky that I came across bread baking as a hobby because it's something that I love doing and keeps me from being as lazy as you.  I'm almost as lazy, but...

thanks, as always, for the uplifting words of encouragement. 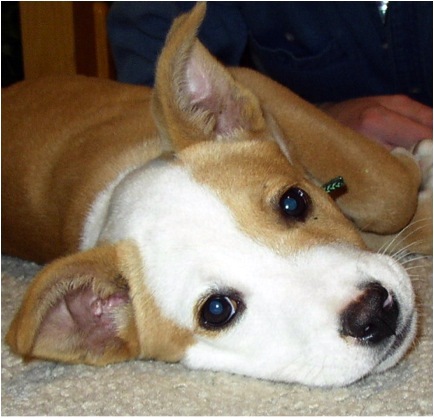 I didn't know you had to say goodbye to your beautiful puppy.  They are never with us long enough.  I had to put one of my cats Cosmo to sleep a few weeks ago and my cat Misty around 4 months ago.  One of our other cats got out of the house and we are still trying to catch her.  Almost had her 3 times but she managed to escape out of the trap twice!

Again, so sorry for your loss of Castagna.

We were able to wring 16 plus years out of her, but her hind legs started to get the best of her.  She began to all too frequently not be able to pull herself up on all fours without a yelp for assistance.  It was clear that the decline was in full force, and we didn't want to be too late and see her really start to suffer.  Once she was unable to always get to her water bowl by herself we knew the game was over.

First they make you love them, and then they break your heart.

thanks, and my condolences to you too.  For the multitude of us who have had pets, we all too well know the downside at the end.

I spent a lot of time on getting the feel for baguettes (long batards) and it has paid off immeasurably over time.