Over-proofed / Under-proofed or what the heck happened?!

Over-proofed / Under-proofed or what the heck happened?!

I've seen regressions in my life but this is horrible!

I used the same formula I always use, same method, same flour and starter... the only difference is the weather now which is getting colder by the day as we enter the fall, so I tried to adjust to the temperature drop but not too much, it's still relatively hot (around 32-35c during the day).

The loaves didnt' spring at all, this first one was covered for 18 minutes, it pancaked in the pot so I tried giving it 5-8 more covered (I know, bad Idea, but as I said one my previous post "Night of the living bread" this actually works for me once so I gave it a go).
Then I opened pot and let it continue baking at the same temp... it did rise but I knew something isn't right... the dark spot on the side got me suspicious... 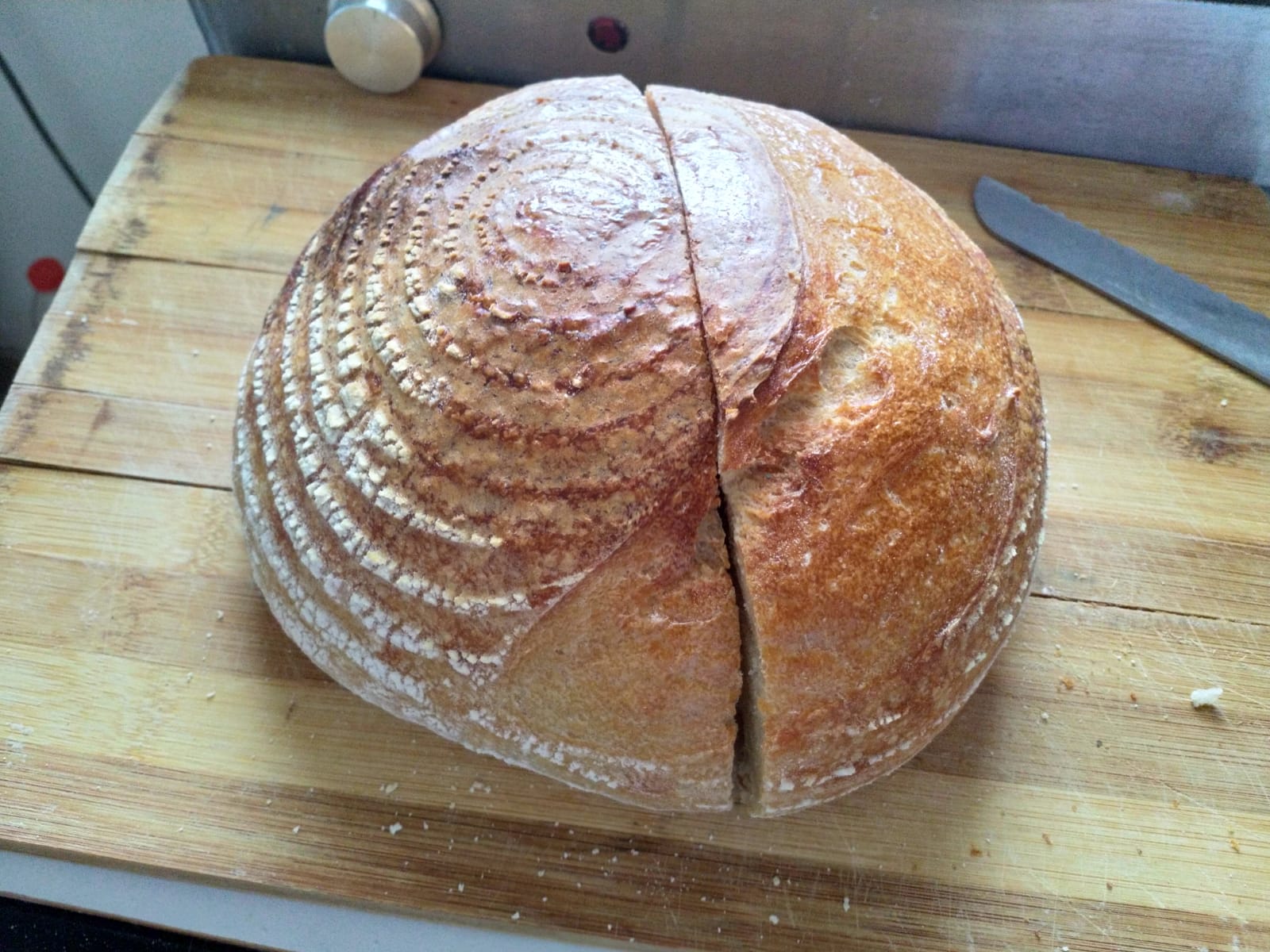 after 3 agonizing hours waiting for it to cool down, this abomination is what I was greeted with: 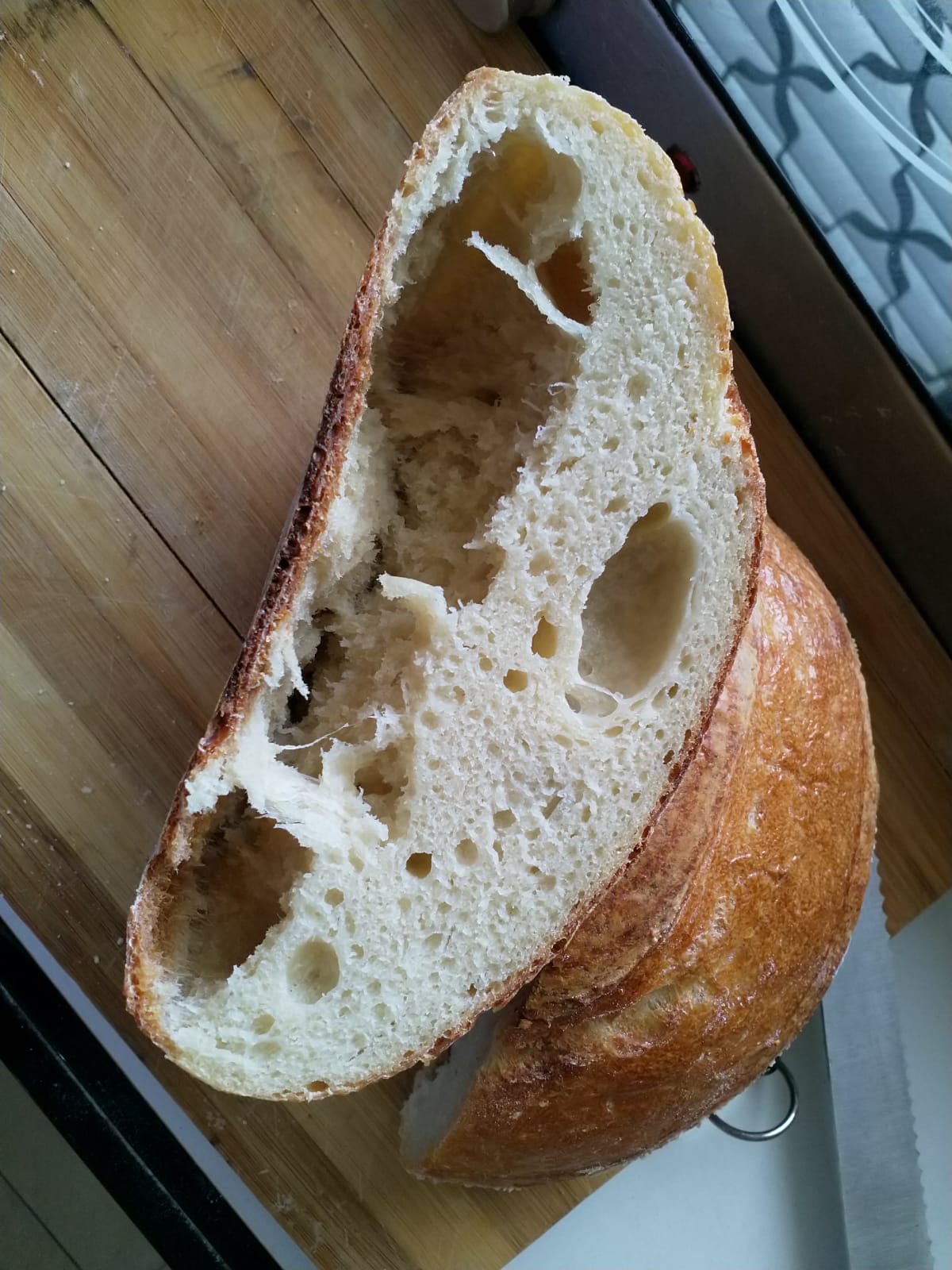 I'm guessing that big cave was created because of the extra time I added but I still can't understand why the loaves didn't spring at all, the second one is still cooling down, I didn't give it extra minutes covered so this one is as flat as an oversized pita bread... 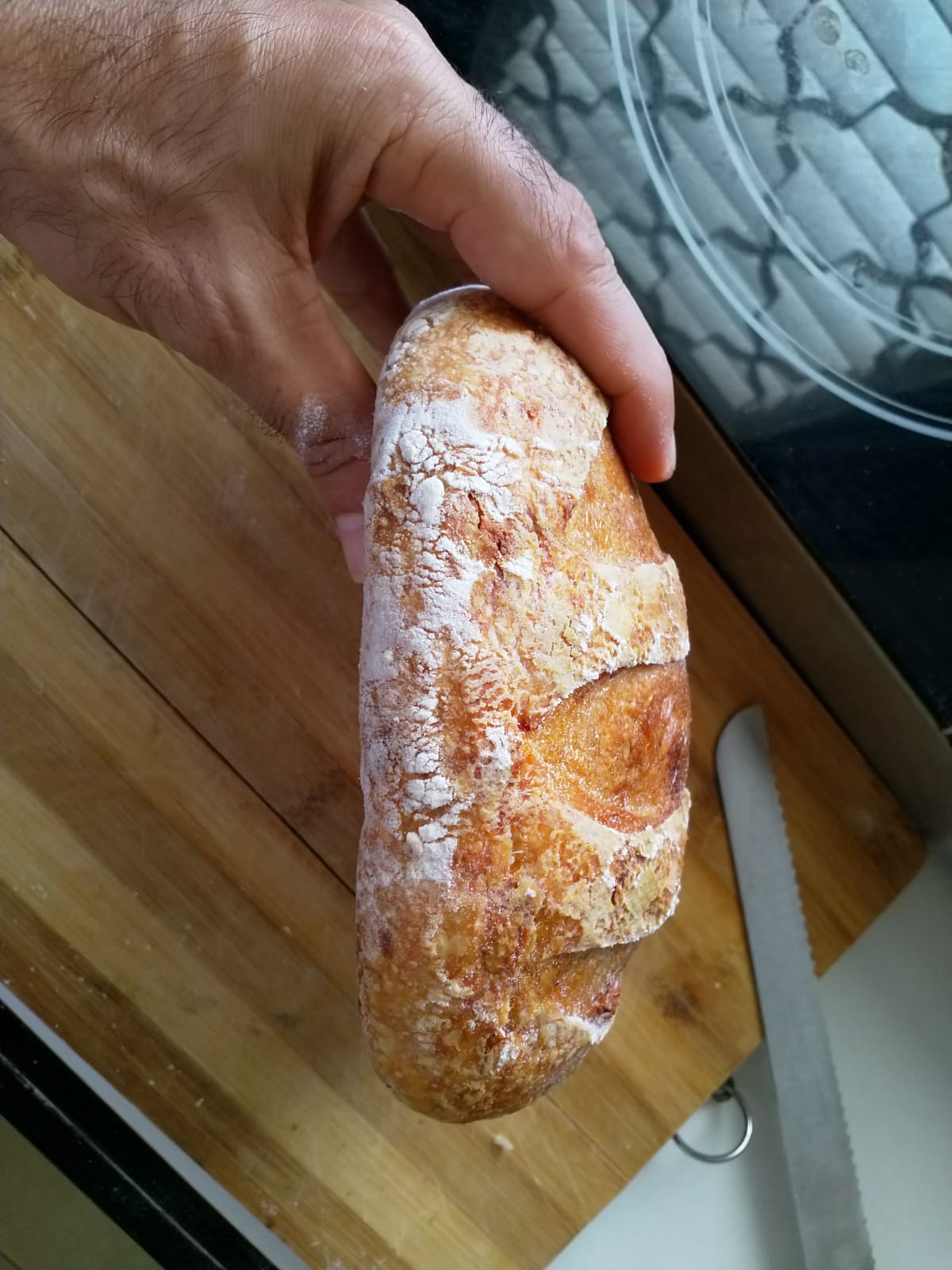 I have no expectations from this one as well, I believe the crumb will look like the top end of the first one.

What happened?
Did my dough over-proof?
Was it Under-Proofed?
(BTW, I find it very hard to tell by the finger poke test when the dough is cold)

Was your starter fully mature? Did your dough rise during bulk ferment? These are clear tells that your bread is underproofed. I’ve done this too many times, so I now make darn well sure my starter is active, and I use the same bins to bulk ferment and I never ever end bulk ferment until my dough has risen past a certain point. This is what they mean by “watch the dough, not the clock.”

Cooler air or cooler water can change times vastly. Try slightly warm water next time. My water is about 90-100 degrees and it cools down a lot because my flour is kept at around 65 at the moment. I say this because conventional sources all cite to use 70 F water. I have found warm (not hot) water to work just fine.

As always, I took it out of the fridge, fed it and let the magic begin, it was during the day and I left it "eat" for a few hours.

I do 30 minutes of autolyse and then add the starter and salt, and during the BF I do 4-5 stretch and folds.

I was pretty sure the dough proofed during the BF as always but now you got me second guessing my initial thoughts, I'm not sure if it proofed enough, at least to the same degree as before...

It's definitely underproofed. Well, more on the edge between underproofed and somehow proofed enough. Those big holes come from trapping air during stretch & folds or final shaping. Probably you also mixed it a little too much or did too many stretch & folds, which results in a dense gluten network and smaller holes.

The finger poke test doesn't really work/apply with cold final proofs. Also it's more for flavor development rather than gas production, that happens during bulk-fermentation. If your loaf has grown somewhat in size (not doubled, it's a more gentle fermentation) and domed slightly, it's successful. But it shouldn't show signs of weakness like a caved in top or fragile structure.
I've done two cold fermentations so far (still testing), first one was 8 h, the second was 15 h. I couldn't notice a significant difference other than maybe a bit more flavor in test 2. So I believe your window of opportunity is quite big.

But yeah, all in all, longer BF until it has grown well in volume, is jiggly and full of bubbles.

The cold proofing or retarding overnight is not crucial for the proofing process and basically you can bake the bread shortly after the bulk fermentation?

When it was hotter I used to bulk ferment for 3-4 hours, then retard overnight, I thought 1 extra hour with compensate for the temperature drop, apparently no.

No, the shaped dough needs to build up some tension and strength yet.

You could also do a cold BF and a room temp final proof. But warm BF and cold final proof usually results in a better loaf due to several factors such as slower oven spring (longer final gas production), the dough being in shape and most of gas production is done already.

And I always pre-shape the loaf, let it rest and then do the final shaping.

Aside from the flavour, I can shape it and leave it outside for a while then bake it, right?

The only thing that I can think about is over proofing...

Sure, you can also do a shorter final proof at room temp, usually 1,5-2 h is quite a standard time. You can use the poke test then.
Cold, long final proof is just a different method, but the idea is the same. And as I mentioned before, I didn't notice any significant difference between warm and cold final proof. Maybe if I tasted them side by side...
One thing I've noticed though is that the loaf with cold final proof seems takes maybe a day or two longer before it becomes stale. But also might be my imagination.

TL,DR: cold long proof is better if you have time and patience. But since the differences seem to be small (in my experience), a shorter, warm proof is totally fine too.

Took your points (and others), I mixed up a small loaf (200g white flour, 70% hydration), left it to BF and watched, every hour or so... I did some stretching and folding at first and then left it alone. It took around 6 hours to get a noticeable puff, so I gave it one more hour, 2 stretches, did the final shaping and popped it into the fridge.

I want to leave it there for 3-5 hours which is shorter than "overnight" for me at least (usually when I bake I leave it in the fridge for 8-10 hours).

Yeah imho i'd make sure you're working with warmer water to compensate.  Hamelman even has an exact calculation in "Bread" that he uses at king arthur, for those fluctuating atmospheric changes in your area.

And post the results, longer BF and warmer wather.

Thanks for the tips.