Alton Brown has resurrected his “Good Eats” show and it includes an episode titled “Wild Yeast Risin’” which is, yes, about sourdough starter.

Having spent the last six months deep in sourdough land—including this forum—studying up on starters and hydration and such, I found myself a little taken aback when it he created this starter not from rye, not from wheat and not with bread flour but from...All Purpose? (Blink, blink)

Yes, there are plenty of similar recipes, so, clearly, not unusual or unheard of; and I’m sure this starter works well as any. But of all the flours I’ve seen used for starters in videos and discussed on bread forums, AP is, well, rarely mentioned. It’s not even commonly used for flouring the baskets. And as this new Good Eats isn’t shy about recommending rarified ingredients , I found it odd that he went for ubiquitous AP instead of, well, whole wheat or at least bread flour.

So, now I’m curious. Have you ever made a starter with AP flour? How did it turn out? Alternately, do you know anyone with an AP starter? How does it compare to starters made with rye, wheat or bread?

I have found that BF typically takes slightly longer to double for a starter (higher protein content maybe?).  WW tends to double pretty fast.  Rye, depends on which type (light, medium, dark).  100% Rye tends to move slower for me.

My BF is hard red whaet flour with malted barley flour. No other enrichments. Same for my BF.

Mine is AP too, it's only 3 weeks old but so far so good. I set the ball rolling with 100g of WW and a handful of wild grapes but all subsequent feedings were AP.

Alton Brown’s recipe for creating a starter is organic AP and water equal parts, nothing to “get the ball rolling.” It’s why I was intrigued because most starter recipes do  something like what you did and then if there’s a switch it’s usually to BF. The mantra for starters seems to be either whole grain and/or “high protein” and AP isn’t whole grain and usually isn’t that high in protein (King Arthur excepted).

The one I use is 9,5% protein, I’m not sure whether it’s bleached or unbleached, the package doesn’t provide that information but I believe bleached flour is banned in the EU so it’s probably unbleached. It might be worth mentioning that my starter more than doubles in size but falls short of tripling. I’m very pleased with how my loaves turn out though

Same here, I use AP flour for baking all of my breads, feeding my starter, flouring baskets etc. With its higher protein content (12,8%), it probably could be labeled bread flour, but it's labeled AP. For my sourdough starter I just use what ever wheat flour I just have in the house. The protein content, organic/non-organic etc. don't seem to matter that much, I don't notice any significant differences. In the long term, it's also simply more affordable if you feed it every day.

AP and Bread Flour will more or less act the same when beginning a starter. I prefer to start with something less refined because it has more critters to give it a kick start. But AP flour has critters in it as well. I might be hesitant to used bleached AP flour, but otherwise it will work eventually. Once established, you can feed whatever you want (including AP). The starters won't all act the same, but they are all viable. I would say to feed with the flour you use most (or a combination) or the one that is cheaper.

Good point Maverick. " I might be hesitant to used bleached AP flour..."

Use unbleached/unbromated flour and no other enrichments (added vitamins, minerals, etc) if you can.

To be fair to Alton Brown he *does* say to use organic AP. No bleach. And filtered water.

My starter has never seen anything but bread flour and it is incredibly strong and active.

A starter can be made pretty much from any carbohydrate and ambient yeast that is nurtured to allow the culture to grow and balance. Some yeasts are better at fermenting and raising bread-those yeasts are usually found on any kind of flour. But remember that yeast water made with fruit works quite well for bread, also. The more processed the flour, the lower the ambient yeast population in the flour and the longer it takes to bring a culture up to usability. Chlorine in water and bleaching the flour can kill a bit of the culture with every feed. Whole grains have more of the seed coat in the flour-which is where the ambient yeasts live- so whole grain flour tends to have a higher population to start and make very active starters more quickly. That is why you are advised to add some whole grain (rye/ww) to a sluggish starter, on occasion.

OTOH, AP flour is generally the cheapest flour available and matches its name of serving "all purposes". It has a yeast population that can reasonably make and maintain an active starter. When I want to make a 100% rye or wheat (if I'm really being a purist for that loaf), I might take some AP starter and make the specialty starter for that loaf. Otherwise, I use my AP based starter.

Mix any flour and water and within 15 minutes it will start to culture. That is the basis for much of the Kosher laws in Judaism about unleavened food during holidays.

I switched to t65 and immediately noticed that my starter rises more and more quickly, the CO2 bubbles are bigger and my bread loaf came out with larger holes as well 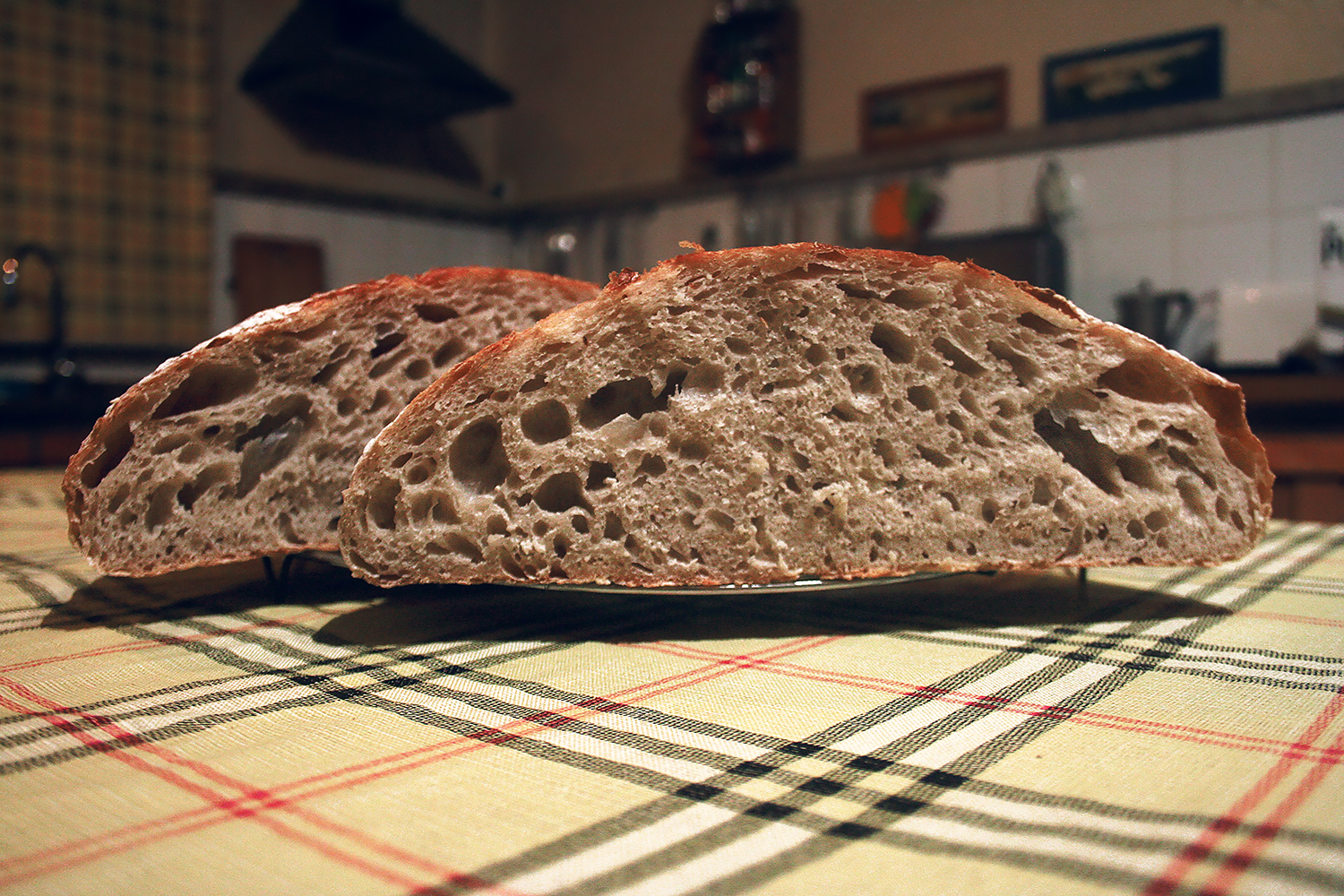 Starter not thriving
New Here with questions on beginning a starter
HELP! NAME THIS FLOUR
Gluten from Wheat Germ ??!
No corn meal!
END_OF_DOCUMENT_TOKEN_TO_BE_REPLACED