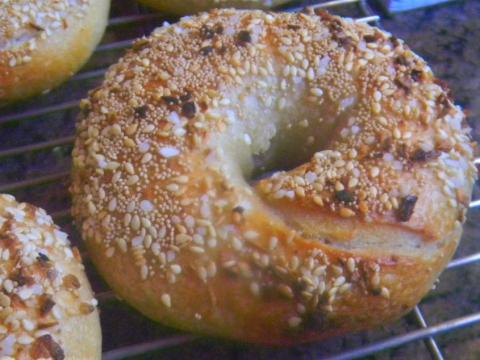 It has been a long time since Lucy made some real old time SD bagels of any kind and she has never made and used a 7 day, old dough leaven to make them rise.  She wanted to do a regular levain but what kind of fun would that be? 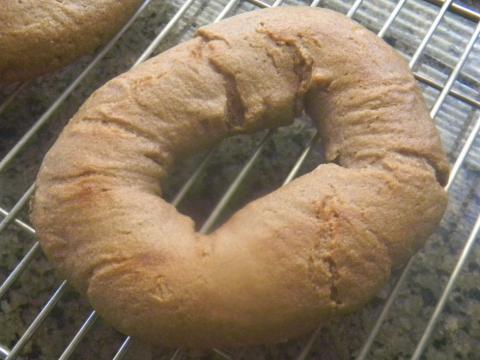 Old and slow is fairly normal the closer you get to 70, or 116 when it comes to Lucy, but only slow really works for food - especially sourdough.  Old food usually turns green and smells to high heaven – even though that never stopped Lucy from eating it. 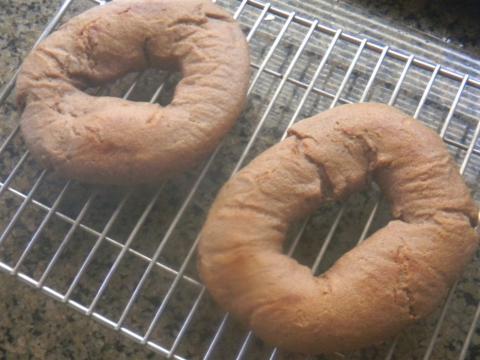 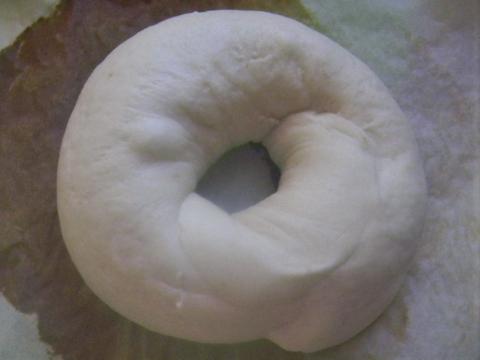 White ones ready for the boil 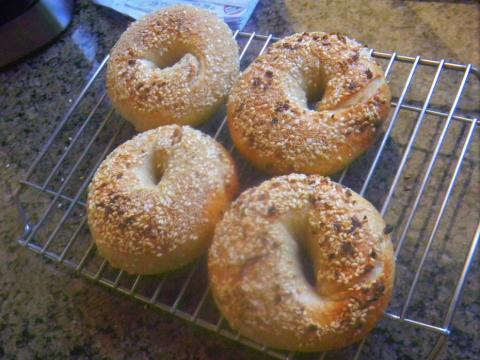 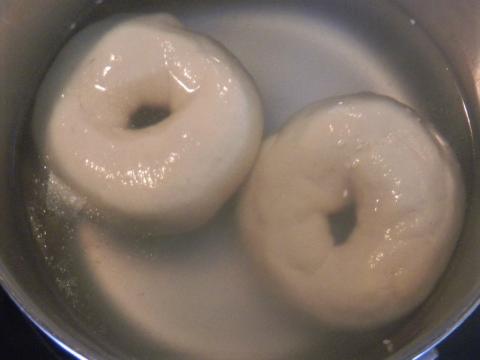 So, we made do with what we had and didn’t worry about the details in the fine print.  First off we made a regular white sourdough using KA white bread flour at 70% hydration 2% salt and 10 g of NMNF Rye starter.  We slapped it around and folded it until it had risen 50% and then put it in an oiled SS bowl, covered it plastic wrap and put it in the fridge for a week to let it get itself situated and a bit sour. 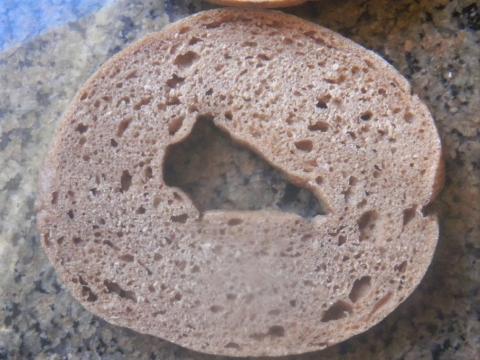 When Lucy finally got round to making bagels she first softened up some dehydrated onions in hot water, tore off a piece of cold, old dough that weighed about 170 grams and then added enough fresh, milled whole rye flour and Pink Himalayan sea salt to get the hydration exactly 53%. 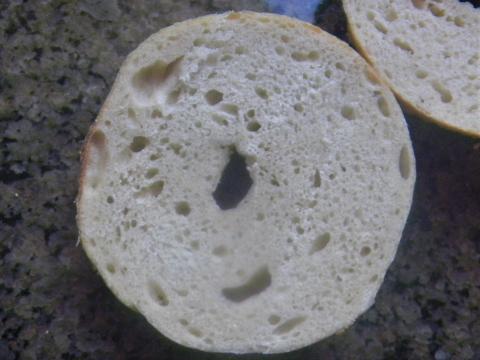 Being the math whiz she is, she did this calculation of how much rye to add in her head.  This is why Lucy is a First Class Baking Apprentice today after 15 years of apprenticeship.  For those of you not as Math based, the old dough had nearly an exact 100 g of flour in it and 70 g of water for a 70% hydration old dough. 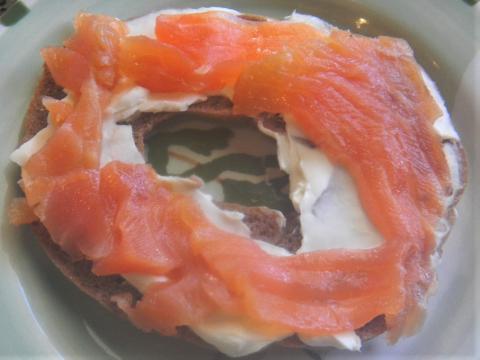 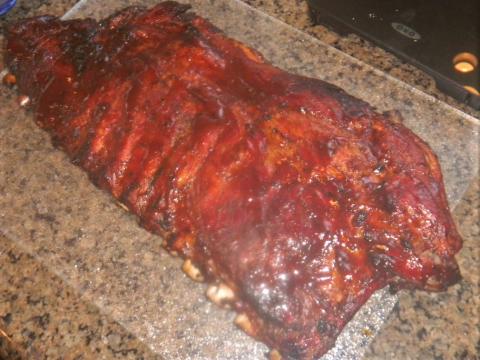 Why are bagels 53% hydration?  Well technically, a white bagel is 53% hydration so a 32% whole rye one should be a bit higher than 53%, say 56-58%, but Lucy doesn’t understand such things and just makes all bagels 53% because that is what bagels have always been. 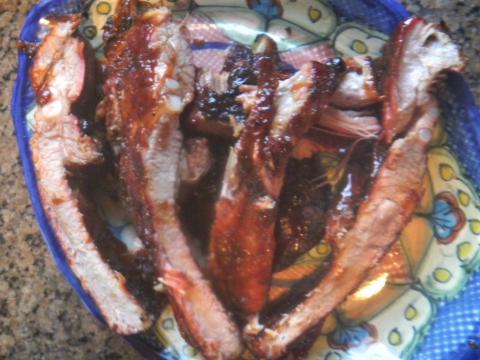 No, bagels are not anything but 53% hydration for white dough so she made the white ones at that hydration using a twice as big a lump of old dough that was now 9 days retarded and used how much whole wheat? Right, yep twice as much as the rye ones - 64 g would do it. 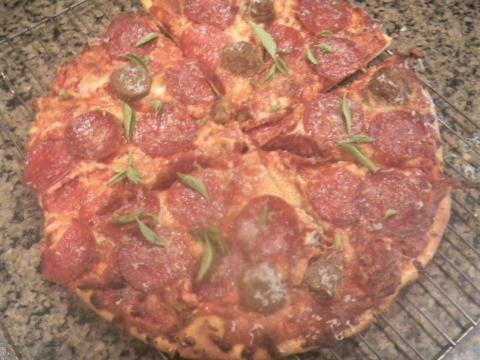 So how did we get that dark color for the pumpernickel bagels with only 32% rye and no barley malt syrup or red rye malt.  Well, Lucy cheated – that’s how.  We know how she likes to cheat when doing anything especially difficult things like getting the right color in pumpernickel. 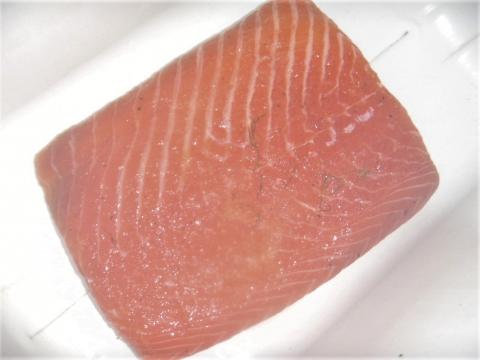 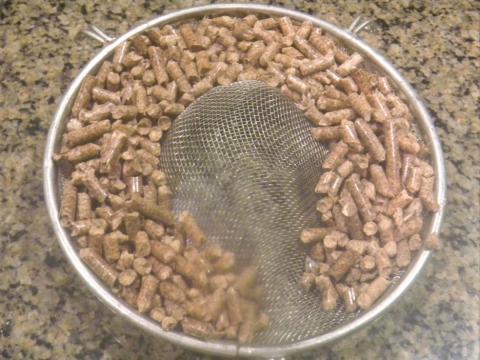 This time Lucy cheated with some espresso powder, brown sugar, cocoa powder, 5 g each, and a few drops of caramel coloring that we got at Smart and Final to make black things for Halloween.  Who knew it would make some pumpernickel looking bread too?  Remember that you have to get some kind of sweetener in there to have the pumpernickel tastes right – otherwise it tastes like deli rye. 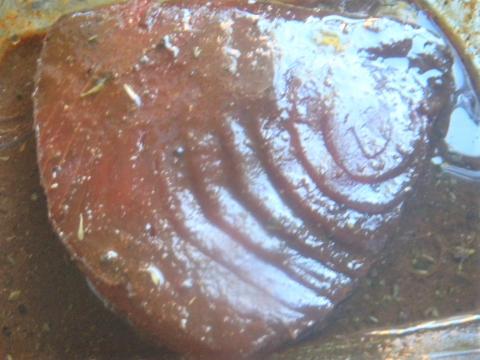 Marinated Tuna ready for the grill

The last thing we did was add in the dehydrated onions.  We love them in all rye breads but especially pumpernickel – 5 g dry weight as all it took for these two bagels.  The white and Pumpernickel bagels were supposed to be treated the same after mixing but my apprentice forgot about the pumpernickel dough on the counter after the three hours of gluten development. 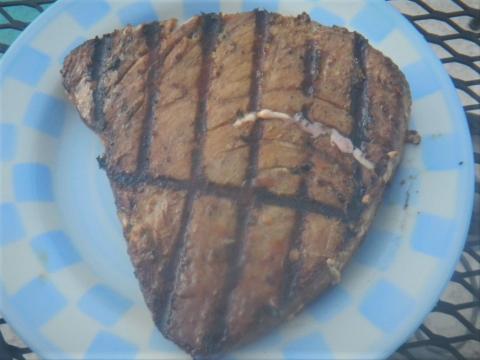 She was supposed to shape them and then leave them on the counter for an hour and then retard them for 18 hours before boiling and baking them in the Mini Oven with a Sylvia Steaming Pyrex Cup.  But she fell asleep again and they sat in the counter for hours on end, till 4 am the next morning before I found them and put them in the fridge. 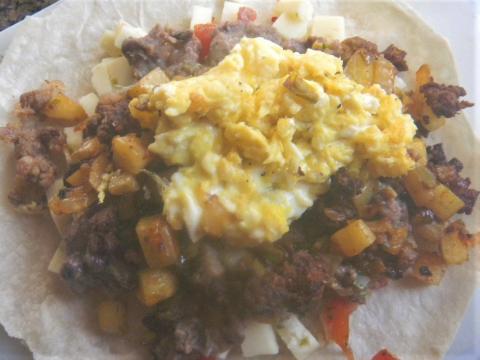 Breakfast Burrito - onion , chorizo, potato and egg ready to be rolled up and garnished

They were more than slightly, mega over-proofed and flattened but they sure smelled great!  A couple of days later I really watched her to make sure this didn’t happen with the white ones.   So, they came out looking a whole lot better, way mire like bagels even if they had no chance io tasting half as good as the pumpernickel ones. 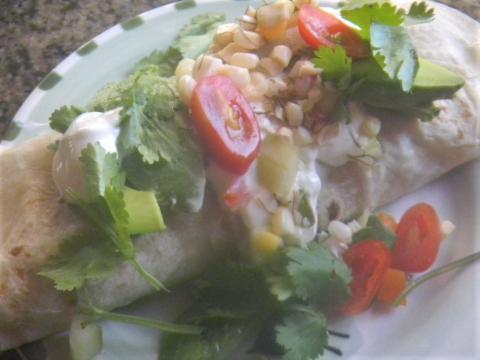 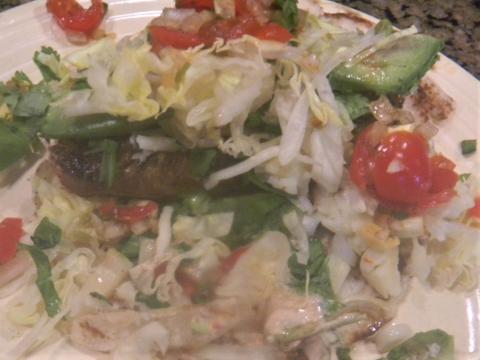 All we had was baking soda for the bagel boil which didn’t affect the color of the pumpernickel ones but the white ones came out a bit peeked looking.  Should have put some brown sugar in there for them.  Boiled them for 30 seconds a side and then they white ones were dried on a towel before dunking them in an everything mix of white poppy seeds, sesame seeds, kosher salt and non-rehydrated died minced onions. 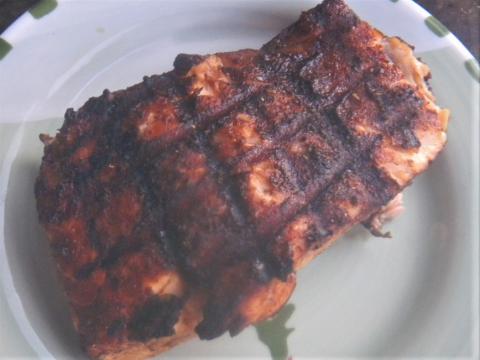 They were baked for 8 minutes at 450 F with steam and then 8 minutes without steam at 425 F convection in the mini oven.  Although looking totally different on the outside they looked remarkably the same in the inside if you discount the color difference.

Crispy on the outside, yet open and chewy on the inside.  They both are nicely sour due to the old and slow processes at work.  Guess that explains Lucy’s sourness as well!  We have been making all kinds of stuff recently.  Smoked meats; bacon, sausages, lox and cold smoked nova lox some kosher dill pickles. 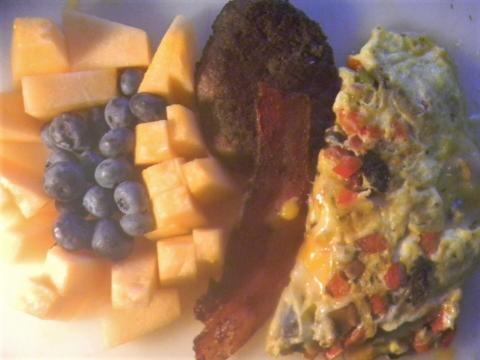 My new Pit Boss, vertical, pellet smoker finally got here but when I plugged it in on Sunday it didn’t work….. so…… I took it back and have to wait another week for them to assemble another one and get it to me.  What a hassle.  I have ti smoke 2 different kinds if bacon tomorrow so I hope I can get the old Masterbuilt smoker to work one more time! 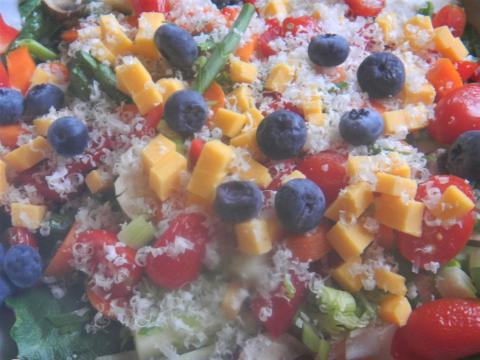 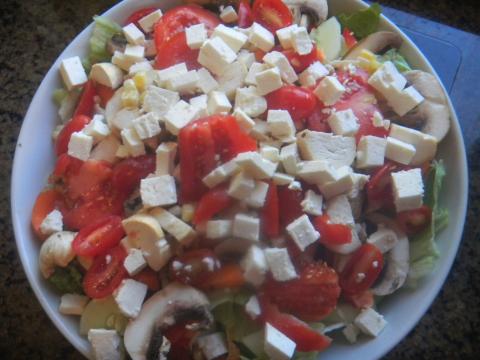 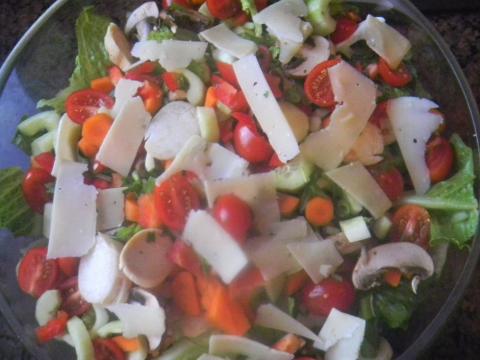 I saw I guy on the internet selling a cold smoke ring for $40 which looked like wire sieve with the middle pushed up and smoke pellets around the middle in a ring.  You light one end with a torch and it smokes for 8 hours or for 4 hours if you light both ends to get more smoke.  So, I took my $1 sieve I got from Goodwill and made one to smoke the lox.  It worked fabulously but I had to spend $24 on the torch! 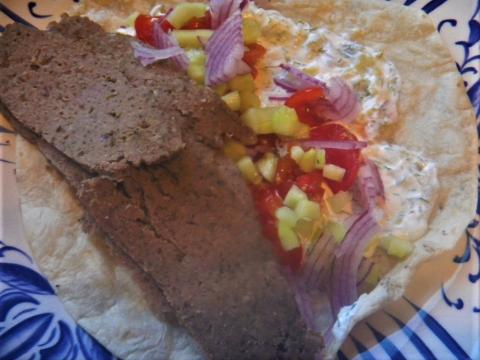 Home made Gyro with all the fixin's

Those are some good looking eats and I love your commentary. Doesn't get much better than bagels and lox!

for lunch today.  Yummy for sure.  I could eat them every day.  The old smoker came to life one more time on Monday so we got to smoke the bacon without having to freeze it.  We made pepper & maple, smoked paprika and garlic and chipotle with fresh rosemary and thyme.  No sense just making one kind when it is nearly as easy to make 3.  Also snuck in a Spanish Chorizo sausage with the bacon since there was room.  The sausage was killer and it will be going on the next old dough pizza.

Glad you liked the post and happy baking ifs!

with all those pictures of good food! And those bagels are amazing! I’m not generally fond of bagels but I think I would happily sample yours!

I stared planning my own bagel bake. Unbelievably, I made exactly the same mistake as you did even though I had warned myself beforehand... The kamut scallion SD bagels were way over-proofed when they went into the water bath. They turned out a bit flat and there was virtually no oven spring. Trying to be optimistic, I told myself that they now fit into the toaster perfectly. If they were any taller, I'd have to slice them in half. Then I'd be forced to buy some pricey smoked salmon because split bagels are meant for sandwiches. Well, at least until we become neighbours :) Despite the flattened look, the bagels were quite fragrant thanks to the scallions and no spread was needed.

What some mouth-watering breakfast burrito and gorgeous tuna steak! Tuna sashimi is too bland for my taste but once marinated it's a different story. There's so much good food that I can't decide which I should pick for dinner. The ribs and gyro sound delicious, so are the salmon, sea bass tacos and pizza!

Everything seasoning is my favourite bagel flavour. Although cinnamon raisin bagels smell heavenly, bagels have to be savory to me :) Absolutely love all the food and bagels, dabrownman!

Max and Lexi are lodging a formal complaint with the authorities.  They don't think Lucy should be working so hard, plus they are jealous she gets to sample all of those delicious good eats! 😎

Those bagels look and sound fantastic. Great idea to use the old dough which must have really gave them an extra boost of flavor.  I haven't made bagels in forever so I think it's time to give them a go again.  I have had issues with not waiting long enough for them to rise properly and ended up with lead balls.

Those ribs look fantastic as does the rest of the food.

Best regards to Lucy and the rest of the family.