A picky starter?? My new starter only eats whole flour?!?

A picky starter?? My new starter only eats whole flour?!? 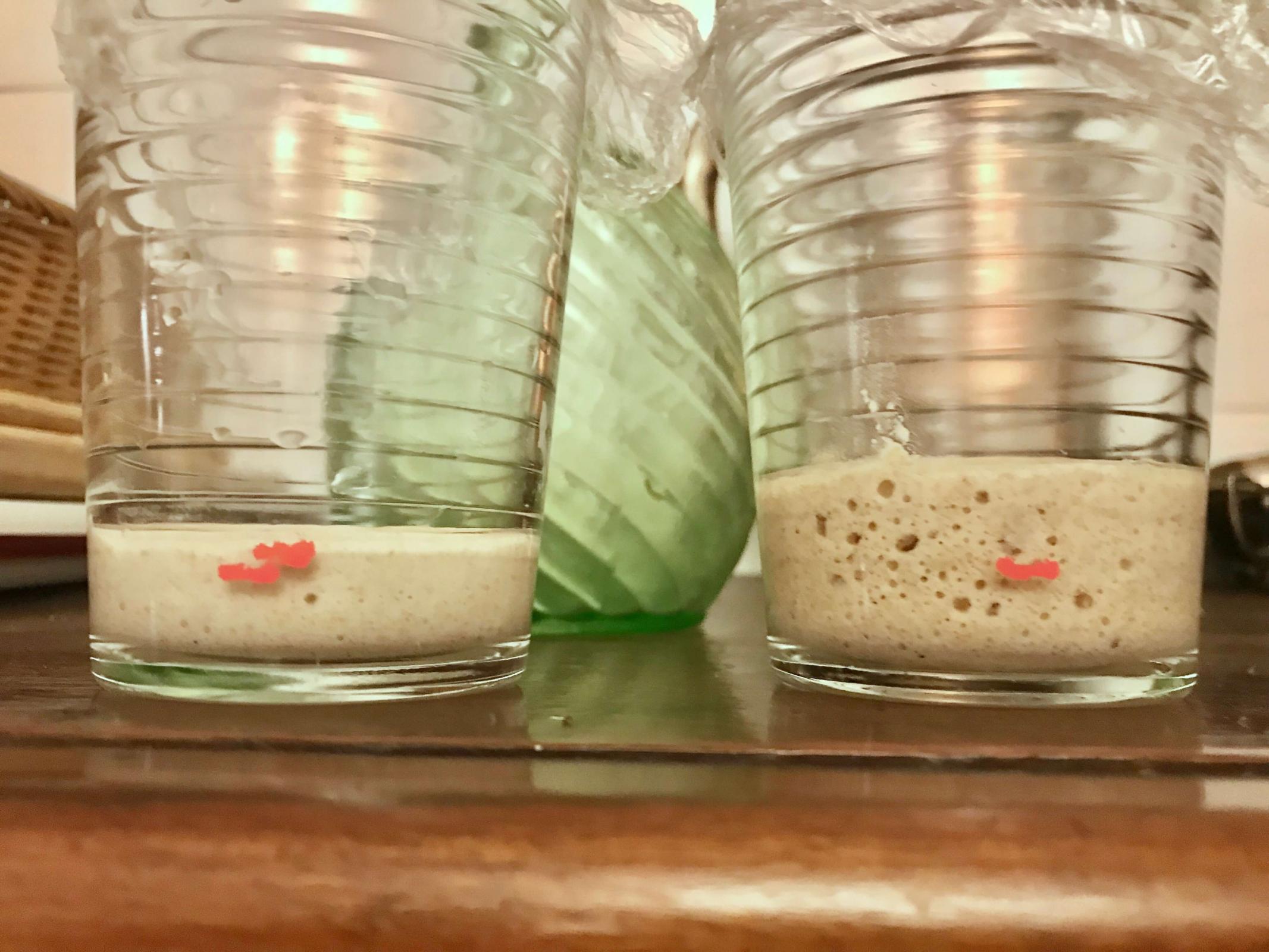 That's because I haven't been able to bake in last months. Trying to change that I'm making my self a new starter.

And now (almost 15 days later...) if I feed it with whole flour it behaves like it is ready to raise a loaf.

if I feed it with white flour (not a bread flour, a pizza flour. 00 low in protein 10%) it just don't raise nothing...or almost nothing.

The image speaks for it self. This was token 6 or 7 hours after fed, both at the same time.

I took a starter fed with whole, that had more than doubled, and fed it with white and whole flours at the same time.

For instance, like if have used only the glass at right in the photo above, and mixed half with white half with whole. Discarded the glass on the left.

Any thoughts? Ideas? Should I start over?

Also this starter don't seam to be at the fast side of my previous starters.

Some data, but not with much precision, as I haven't took notes on this.

Doing this for about 10 days now. Feeding it every day, or now, every peak, since it began to have activity.

It was started with some old frozen starter, but by the behavior I think it just started from scratch again. Or almost.

Smells superbly! Fruity. It is a ferment for sure :)

Thanks for any help.

Hi VK, can I ask how many feeds in with white flour since you split the active starter in two?

I actually did the same thing about 10 days ago, put half of my whole wheat starter in a separate bottle and fed it with white flour. It was significantly slower and less active than the whole wheat mama starter in the first 2 days, but after 2 feeds or so it started to become very active.

FMHO, give it some time, or, give it a lot of time lol. A few days after switching to white flour, I was out of town for 1 day so I fed it 1:2:2 and left it on the counter (ambient 79F/26C). When I come home it has risen and fallen and was very frothy. Once I fed it, it started bubbling like crazy in 4hrs.

I have also read that it would help to feed it with half whole wheat and half white flour as a transition period for your starter. And maybe check on your pizza flour, is it stone ground? What's the date of production? High temperature during machine grounding my kill the natural yeasties, and another post in this forum has noted flour stored over 1 year may not work in the starter either.

As a reference, here's a photo of my starters on day 2 (after transitioning). 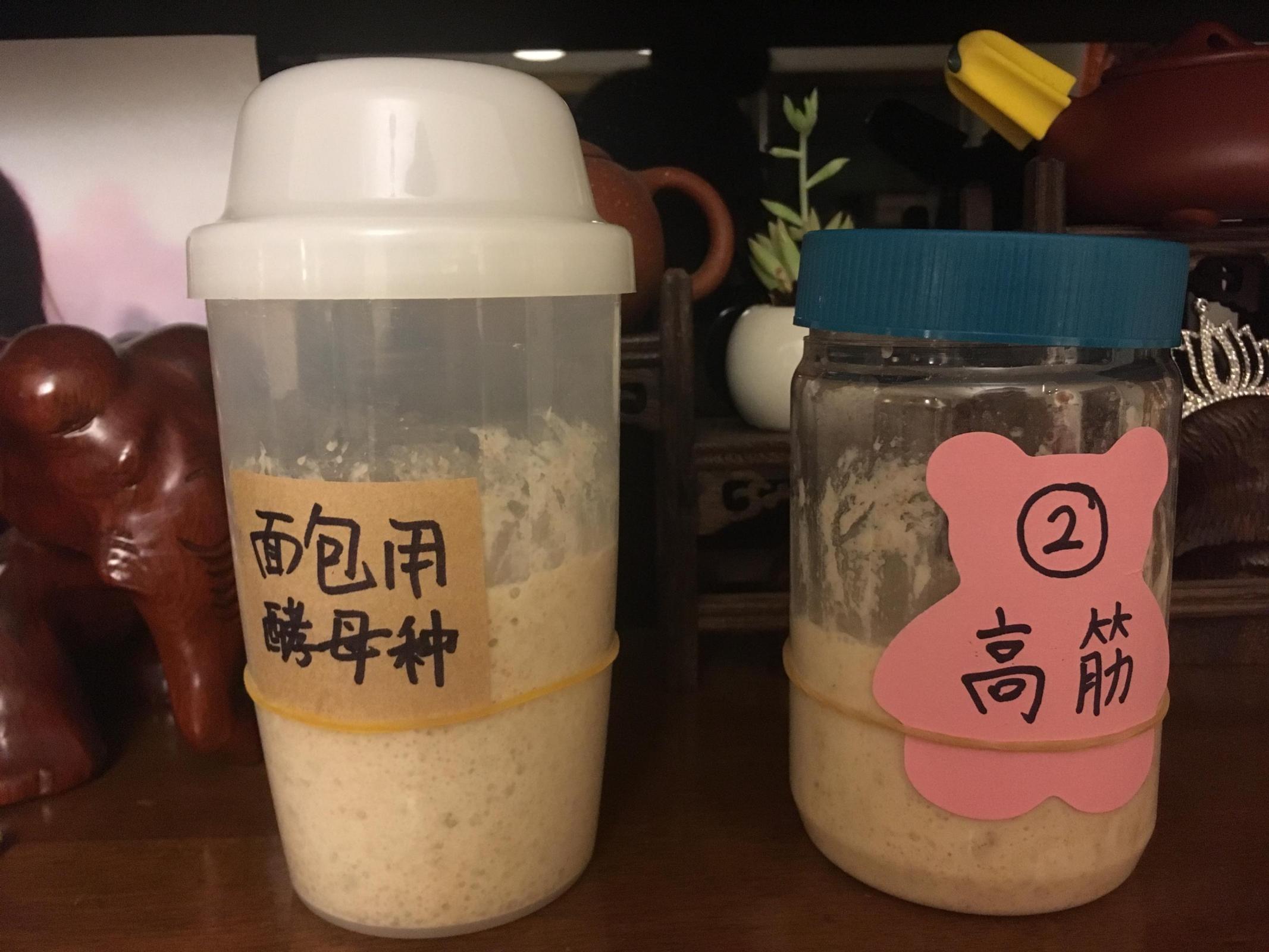 4hrs after feed when I come back home. 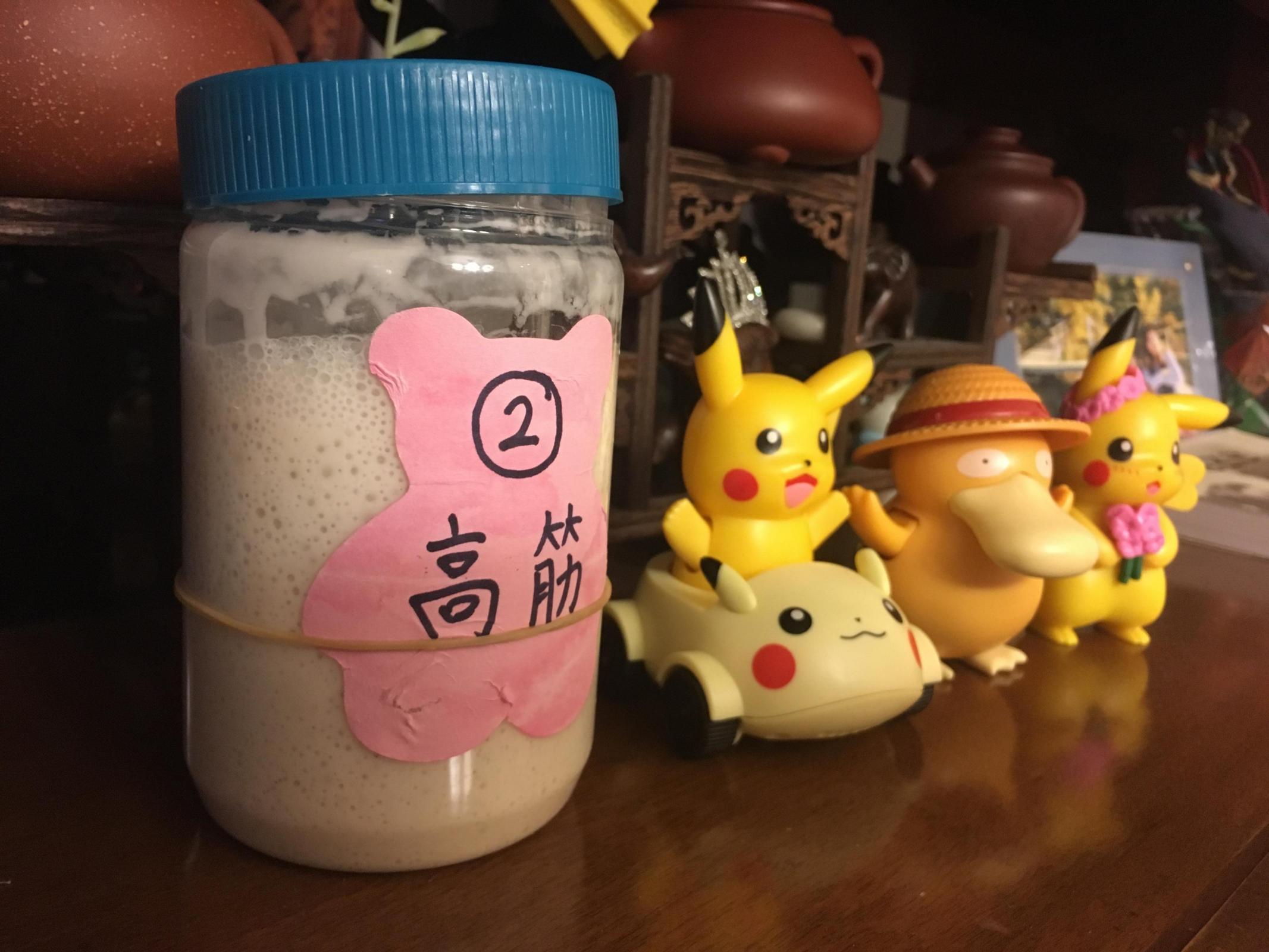 Just too add one thing, 10% protein content shouldn't be the problem. I have used 9% white flour (when I ran out of white bread flour) and it has always been very active.

Good luck on your starters!

Thanks for you kind answer to my issue. Actually, I have done this. Left it being until it smells like vinegar (2 days probably), when I assumed it had already reached the end of fermentation cycle end feed it again.

Also I think Mini's comment below may have nailed it.

I'll post some updates and a photo with the current state.

So Anne as per your suggestion I left the white one untouched. And it, after a long time, rose a litte more (see the new picture below), doubling after all. I'll keep this going some more. Thanks again

with less water.  That will thicken it up and it may be able to rise higher.  A thin mixture will often allow gas bubbles to rise and break on the surface.  WW will absorb more water when it hydrates and become thicker with better gas trapping abilities.  Another way to compare the two is to repeat your comparison experiment then cover both jars with deflated plastic bags secure with a rubber band sealing in released gasses. Then compare the rates at which the bags fill and inflate.

I think this might be it. The withe mix was indeed very liquid...

As soon as I read your comment I gave it a try. Also I made an attempt of a preferment, I neeeeeed to bake!!! lol 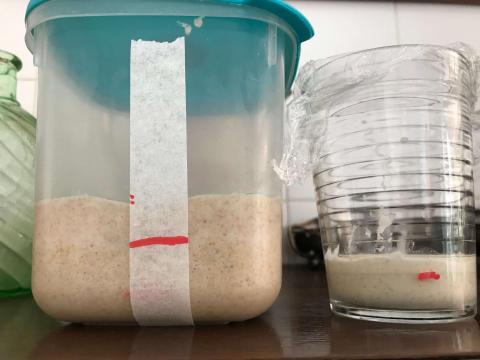 Not what I hoped for, but closer.

The white mix has not doubled yet, but is not loosing all the gas as before. Perhaps the starter still weak after all??

And the PF is not mature either, but this can be just normal timing as I used just so little starter and is cold here. (meaning around 23 cº, tropical cold)

Is it possible that this is a slow strain mix I got together this time?

Will it change if I keep feeding it?

adds a big lag time but the next feeding will speed up.  Eleven hours for 23° C is reasonable but wait for it to peak before feeding again.  In the picture, it doesn't looked like it reached maximum volume.  Try now a 1:4:5  s:w:f. And see when it peaks.  23° is also on the cool side for a new starter.  Just a degree or two more makes a big difference in fermentation times.

Great. Will do. I'm waiting until peaking usually. Thanks.

What's the difference between white flour and wholegrain?

White flour is just the endosperm which contains the carbohydrates, protein, vitamins and minerals.

The rest of the grain contains mostly fibre.

As far as I know the yests feed off the carbohydrates.

So why would a starter react, or not react as the case may be, when only being fed white flour?

I don't know. But I read everywhere that whole flour have more nutrients than white. Also by experience whole flour does go faster, for sure.

So in this new picture we have, from left to right.

over rose actually. this is 18 hours after mixing. It rose beautifully, but... Ironically to much. As it took so much time raising, it got me in my sleeping time, and this morning it was this big. Probably because it has 50% of this so low in protein white flour, it didn't stand so long fermentation. And the dough is over fermented. The gluten structure is collapsed. Couldn't handle it. So I throw the glob in an oven pan, and it's in the oven right now. Let's see what happens. I'm so used to strong flour that I missed this happening.

Anyway the starter rose a loaf, that's something already ;)

And the same white starter from the first post. not fed so far. It gained some heigh :) Will now do as mini suggested.

Thank you all guys!! 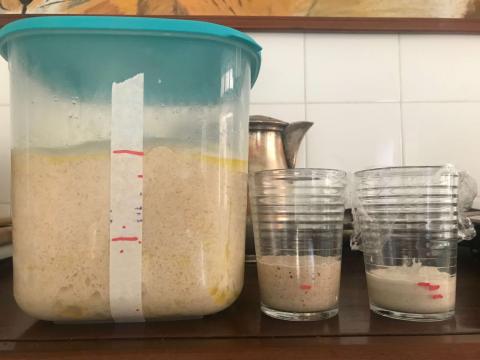 Wow I'm surprised that your white starter has finally gained height in such a long time without being fed! They must have been a little sleepy in the first two days. Hopefully with next feeding they will be wide awake and munch through their fresh foods and produce a ton of gas like mine did!

And your dough looks really delicious! (Yes the raw dough makes me feel hungry in the middle of the night lol)

Plus you are the first person to think my scribbles are lovely. My mom always say I can't write Chinese the proper way XD