Another Focaccia for the Daughter

Another Focaccia for the Daughter 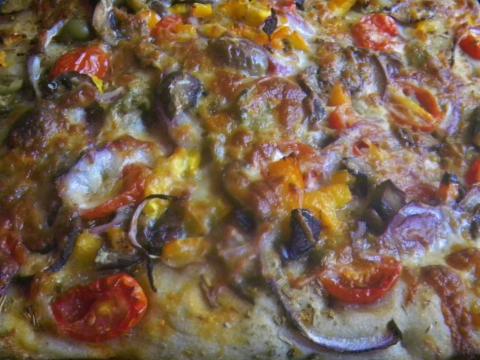 We sent a picture of the last focaccia to the daughter and she said that she wanted on when she was here this weekend.  This one was a bit different because Lucy is so old she can’t remember from one minute to the next and never liked doing the same bread twice anyway when she could remember. 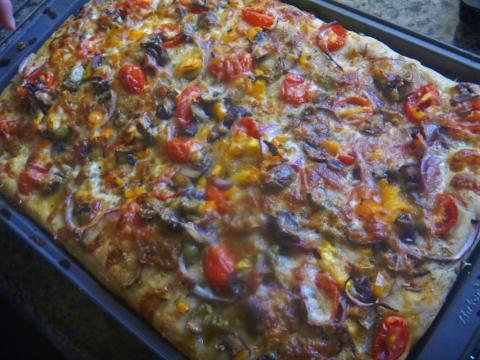 This one is only SD with no Instant yeast kicker.  The levain was 100% hydration, 15% pre-fermented flour with the 10% whole grains (rye, red and white wheat) in the levain. The last one didn’t have any whole grains at all. 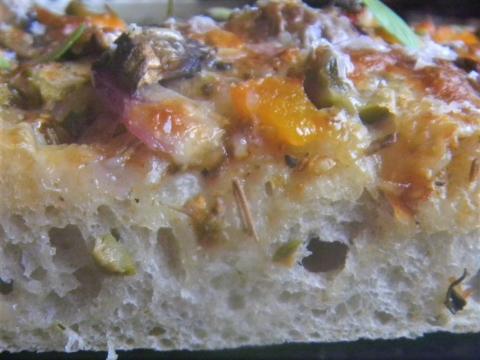 The dough flour was half AP and half bread flour instead of mostly bread flour.  Overall hydration was the same at 71%.  The levain and the dough were retarded for 24 hours and last time the dough was retard for 5 days. 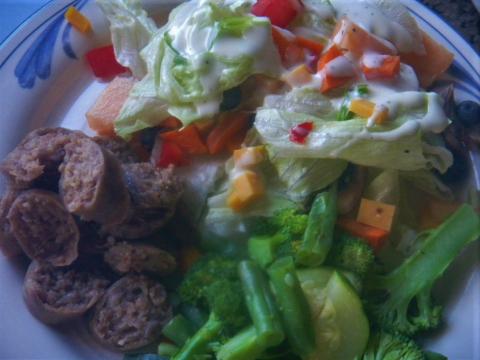 We did 2 sets of slap and folds of 100 and 25 slaps and then 3 sets of stretch and folds from the compass points all on 30 minute intervals before retarding in an oiled bowl.  We let it warm up for an hour and a half on the counter before shaping it into the PAM sprayed jelly roll pan. 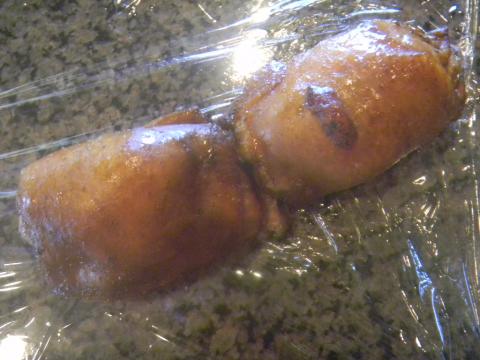 4 of these smoked chicken thighs went into the Hatch Green Chili with Smoked Chicken, white beans and fresh corn.

After shaping we covered it with plastic wrap and let it proof for an hour before dimpling and putting on the toppings.  1 T each of dried rosemary and oregano were dimpled into the dough first.  Grape tomatoes are then squeezed over the top, the juice spread around and the tomatoes placed on top. Then red and green onion, orange and red bell peppers, crimini and brown trumpet mushrooms and 4 different halved olives were placed on top and them covered with a dusting of Parmesan cheese. 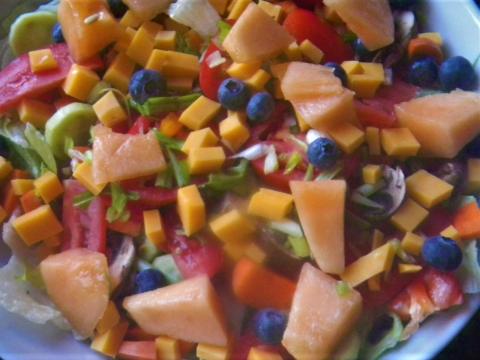 It's not dinner without a great salad.

The last thing was a drizzle of olive oil and Into the 450 F oven it went for 8 minutes of Mega steam.  Then the steam came out and a layer of Monterey Jack cheese went on and back into the 425 F Convection oven it went for another 13 minutes.  When it came out we put on another layer of grated Parmesan and fresh Thai basil and a bit more EV olive oil. 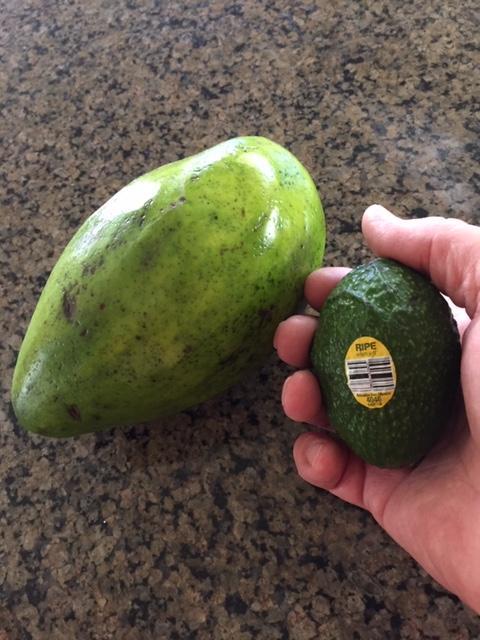 Yes it it a the Avozilla Avocado!  This one is a cross between the West Indies and Guatamalen Garantuan varieties.  The are a couple of other ones grown in Australia but they aren't smooth skinned like this one.  This one was $2.

With the extra toppings this one was all that much better than the last one.  We have been munching on it for lunch all weekend with a side of Persian cucumbers and Zatar, oregano and fresh dill infuse Lebneh mixed with Lebanese Greek style yogurt.  Just plain deliciousness all around! 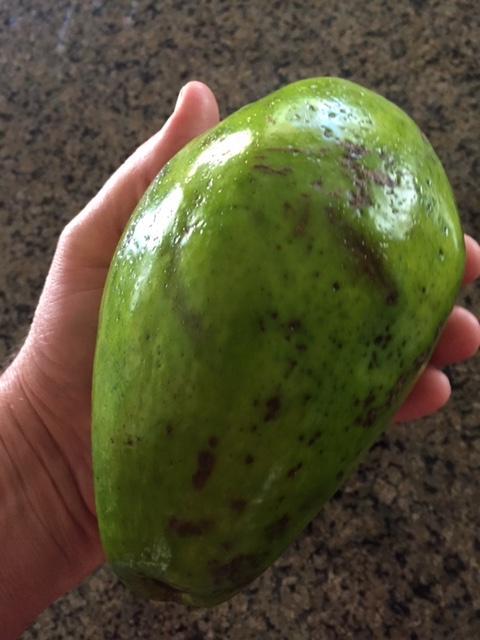 We froze some for the focaccia for the daughter to take back to her husband in Seattle later today.  Sending him some more starter and lava rocks too.  4 posts in a month - Lucy has been busy,

Love the colors on the focaccia.  This one must have tasted even better than the last.  I'm a big fan of the mushrooms.   I'm sure your daughters husband will appreciate his care package for sure!  Love the chili with the smoked chicken.  It sounds very tasty and right up my alley.

The cherry tomatoes are still producing here and I'm going to plant some lettuce later today.  Have to use some of the tomatoes on a nice focaccia like you did or a pizza.  I keep saying I"m going to do one every week and for some reason I just have not gotten around to it.  Never enough time to do everything, but soon enough.

Max and Lexi say hi to their West Coast sister Lucy and are glad she is feeling much better.  The temperature here was in the low 60's this morning for their walk, so no cooling jackets needed.  Still lots of treats though 😬.

dabrownman
September 5, 2019 - 5:15pm
The focaccia tasted even better than it looked

and it looked grand!  The girls ate it right up and wife just Picked off the olives a D gave them to me!  She hates the salty little devils as much as you do!  My daughter used to not like them because of her mother but she grew out that and loves the splash of salty taste.  In another month I will be planting cherry tomatoes for the winter and hoping some come up volunteer too!  I planted 5 left over tomatoes in a big pot so they should take as soon as Lucy starts watering it:-)  Throw some sauce on it and some smoked meats and you will have a great St Louis or Detroit style pizza instead of focaccia.  This focaccia is perfect for vegetarians that eat cheese and like white pizzas!

It was only 110 F today and over 108 F all week.  Not bad for September and fall!  Lucy sends her best to the soon to be frozen black ones!

Glad you liked the post Ian and Happy Baking!

and frankly not as tasty.  Maybe if you never had a regular sized one it would taste fine.  it made the largest bowel of guacamole ever.  Had to put it into a much much larger bowl since it is around 5-6 avocados in size.  Guacamole never lasts more than one day around here since we inhale the stuff but this one lasted 3 days.  My wife said not to buy anther one but If Lucy finds a rough skinned one, we will get it to see if it tastes as good as the old tiny Haas.

So there you go.  The bakers in Australia should have a lot to say about the rough skinned gargantuan ones they have there but they sell for 10 -15 Australian dollars instead of $2 USD.  Maybe they taste better though.

by calling it focaccia. Who are you kidding though? We all know it's essentially a Sicilian pizza with a tastier base :) Despite the shorter retard, I bet this one is better than the last because of the whole grains. I used to spurn olives like your daughter, not anymore. It's my dad who hates them and my mom who gets all the picked-off olives though.

I'm drooling over those smoked chicken thighs! Now you remind me of the bottle of liquid smoke I have in the pantry. I shall add a drop to my lunch Indian curry to make it restaurant-style. Even the regular hass avocado costs US$1 here... Luckily we aren't crazy for avocados so I don't buy them often. Pretty sure it'd take us 2 weeks to finish eating one Avozilla Avocado! I might get sick at the sight of it after 1 week :)

Post often and keep Lucy busy: reading your posts is one of my favorite forms of relaxation!

A bit if whole grains and all SD with no IDY.  The bread is great but the toppings are the killer portion.  No spicy sauce no meat so it can't be Pizza.  It has to be focaccia:-)  I made another batch of dough retarding in the fridge for a few days that is all SD, no whole grains but I'm going to use some if it as old dough to make Pumpernickel bagels to go with the next batch of lox this week - Lemon this time instead of dill with some herb maybe oregano and cold smoked after curing this time instead of using liquid smoke.  It should go well with the this week's focaccia that will have pepperoni on some of it and some won't have olives.  It is fun just seeing that Avozilla - too bad it didn't taste that great.  Lee Lee's raise the price foe these monsters from $2.19 to $2.79 today for some reason.  But they had a nice filet of salmon for $6.99 a pound to make up for it:-)  After it freezes for 12 hours overnight to make it Sushi grade and kill the the wee beastie parasite critters growing in it that the salt cure won't phase, then the curing starts for the lox.

Glad you liked the smoked thighs - they are my favorite even over ribs and sausages or even brisket. Smoked gumbo is pretty killer too but it has smoked andouille sausages and chicken it before it is smoked again:-)