I've been baking bread for a few months, appreciate the great pointers from this site.

I've made a few white yeast and sourdough boules and loaves.  In general I've been doing relatively high hydration (72-78%), using various methods and amounts of yeast.  Most of the results have been surprisingly satisfying, but up till now the boules all came out a bit flat.  Not pancakes, but would definitely have wanted a taller loaf.  After shaping, the dough always flattened out fairly rapidly.  I was using various no-knead and stretch-and-fold techniques.

Recently came across the Slap and Fold video by Bertinet, and thought maybe my dough wasn't strong enough, so maybe slap/fold would be the equivalent of longer kneading and might be helpful.  Used it yesterday for a plain white yeast bread, and it certainly was. 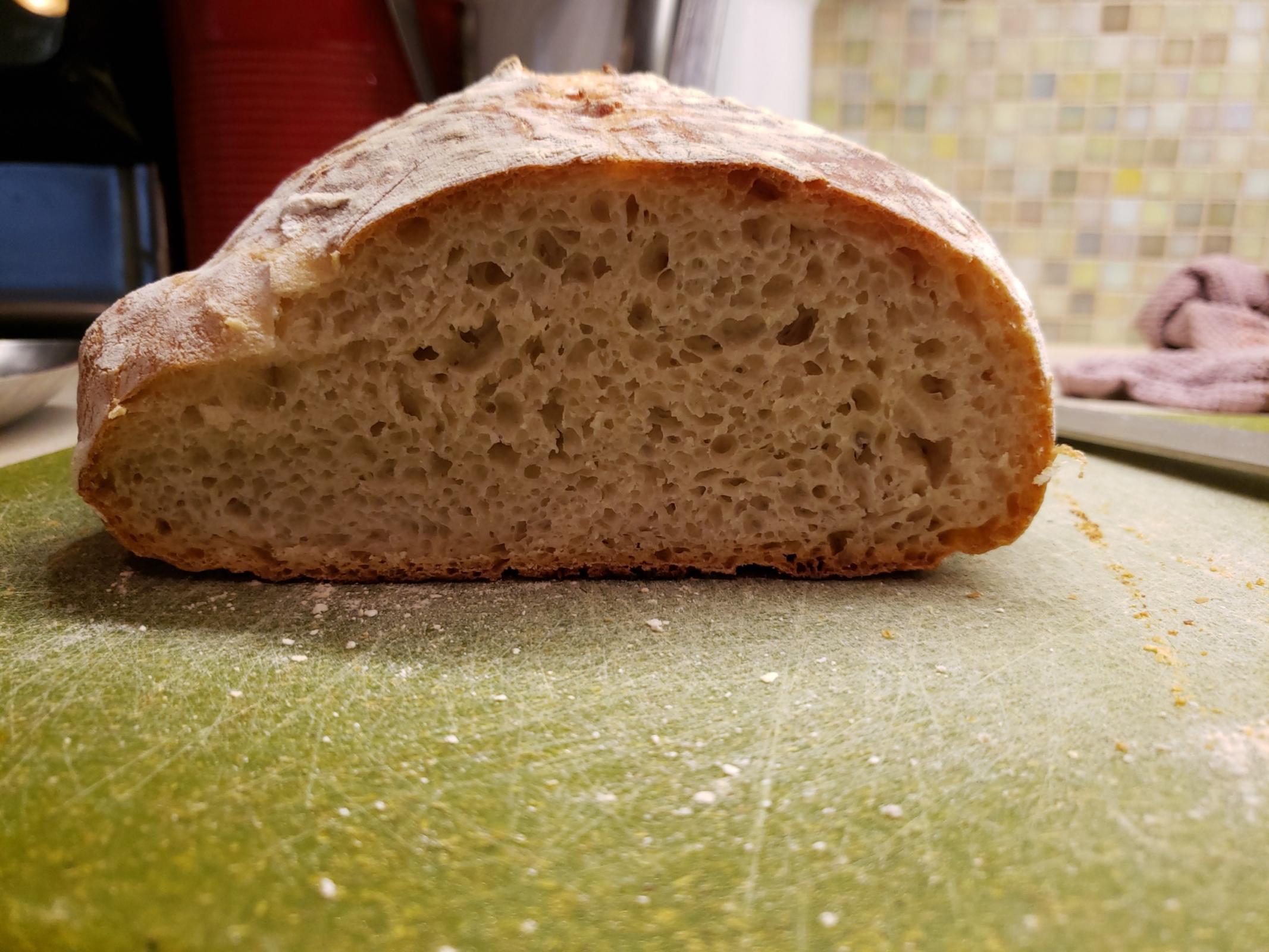 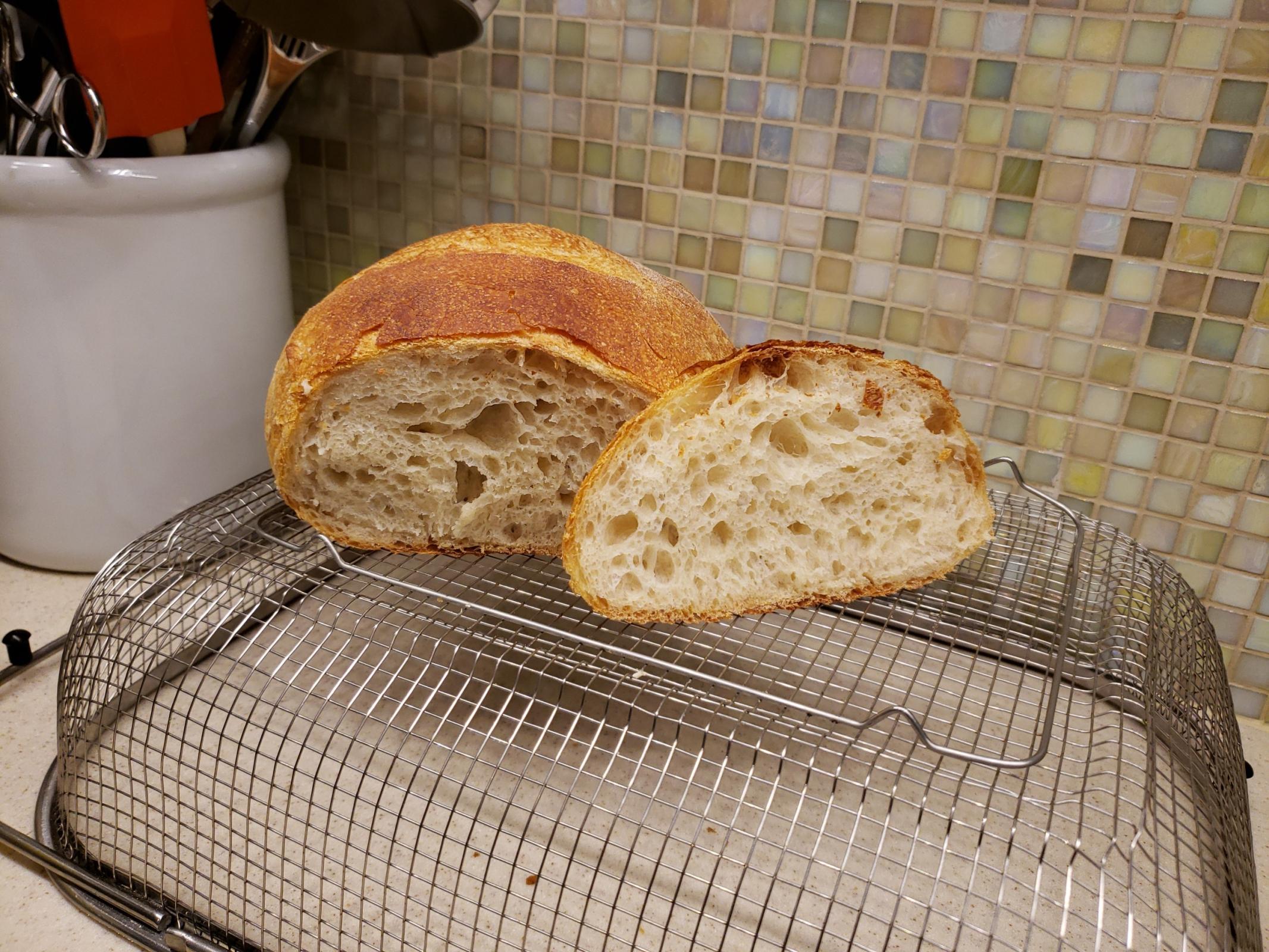 Granted, the difference isn't earth shaking, but it's noticeable, and I definitely found the shaped dough spread out much less.  I did enjoy slapping the dough on the counter, too.

Others with similar experience?

Nice looking crumb, Michael. Another thing you might try is cutting a portion of your bread flour with high-gluten flour, even up to 50-50. If you’re not proofing in baskets that will help the boule retain its shape during proofing.

Michael, the crumb in the bottom image is exceptional, IMO. Absolutely gorgeous.

I recently just started using slap and fold after mixing and the two loaves I’ve used it on I think had better oven spring.  Now the most recent was a bit under proofed, but still I was really happy with the gluten development.

Your bread looks great to me.

Thanks for the comments and the compliments!

I don't know much about high gluten flour, I assume it's higher in protein than the KA Bread Flour I was using.  Will look into that.

Beatriz Echeverría also has a nice YouTube on French Folding.  That's where I learned it.  A bit more effusive a teacher than Bertinet.

Thanks for the video link, Beatriz explains slap and fold very well.

Yes, this is another great video, thanks.

I agree that starting to use slap and fold was a bit of a game changer for me too....I love Rubaud method as shown by Trevor Wilson for wetter doughs and still use this to kick mixing off but in my case I did not appear to build enough gluten with just that method even with longer bulks and folds....

However, even a few slap and folds before starting bulk seem to do the trick to start up some good gluten development which then is completed with the time given to the dough during bulk fermentation and a few coil folds....

The only time when I don't use slap and folds is now when I do a 'pre-mix' with salt and leave the dough at a colder temperatures over night. Then time does the job and gets the gluten development going but beware as depending on flour and temperatuers it can turn your dough into soup and I have noticed it works best at colder temps.and with stronger flours..... around 10C or so in my wine cooler.

Michael, if you haven’t read or experienced this, it is good for you (and others new to slap & fold) to know what to expect.

Early in the initial slap & folds The dough will begin to fall apart. This is to be expected. It is an amazing phenomena to experience in your hands. Shorty after the dough breaks down (you will know when it happens) and as you continue to slap & fold you will see with your eyes and feel with your hands the dough coming together and getting cohesive.

I did see the description of the evolution of slap and fold (I believe it was your description).

I only tried it once so far, and noticed some changes in the consistency as I went along, but couldn't really characterize them accurately.  Will pay attention in the future.

Community Bake - Baguettes by Alfanso
Can't tell if starter is ready for baking/...
Crumb and holes are too big!
Question for the Bagel Bakers
Substitute question (bread "improver")
END_OF_DOCUMENT_TOKEN_TO_BE_REPLACED