I’ve noticed that most starters that use fruit do not allow the fruit to ferment first, but are bundles of fruit or simply add the fruit to a flour paste.

In the mid-90s I created my starter from a young grape wine and it was slow but forgiving and had a wonderful flavor. There really as a dearth of information then so the only reason I did it this way is because it made sense at the time.

I recently fermented some wild plums into a young, percolating wine. I’d like to use this in hope of utilizing local yeasts in my breads.

Is there any reason I shouldn’t try to use this yeast rich wine to create a starter?

Are there pitfalls to this method that I may not be aware of?

Before anyone suggests another method: I have several other working starters. I just want to use local flora.

If this has already been discussed, I apologize that I haven’t found the answer using search. I’ve also looked elsewhere.

I’ll use this thread to document my attempt to make a starter from young wine in case someone comes along and gets the same idea and has questions.

Within 3 hours it bubbling and smelling strongly of acetone. (Edit: went to smell the wine and it also has this smell, apparently caused by wild bacteria and some yeast, according to wine making forums. I apparently introduced the acetone smell to the starter. To be clear, the wine did not smell this way when I strained the must just prior to adding it to the flour, but smells like it now.)

5 hours in and the starter has only risen 30%. Smells like acetone but I can also smell the plum wine more than before.

At 5 hours I have removed most of the starter and fed it approximately 1:6:6 (starter:water:flour) and will leave it overnight.

After my last post I decided to cloak the starter with a mixture of nitrogen and argon gases to give the starter an anaerobic environment to ferment in. I use airlocks on my sealed jars so this was easy to accomplish. I had read on a wine forum that the bacteria responsible for the acetone smell are aerobic and that a common homemade fix is to lay cling wrap on top of the must, carefully sealing the sides. Hey, why not try some inert gases instead?

This morning it was clear that the starter had risen significantly during the night. I opened the jar in anticipation of what I would smell: no acetone smell at all! It smelled of alcohol, yeast, and fruit.

I gave it another 1:6:6 (approximate) feeding and it doubled in 4 hours.

I have placed it in the refrigerator for the night to delay more fermentation until I can give it my undivided attention tomorrow and through the weekend.

It makes me wonder if others have tried anaerobic fermentation for vigorous starters that smell like acetone.

The starter is still vigorous and no longer has an acetone smell. It seems one treatment with the gas cloak was enough to change the environment in favor of critters that do not produce this smell.

I treated the wine twice with the gas cloak and the acetone smell also went away (though the alcohol smell is quite strong).

Speaking of smell: this young starter has a lovely fruit aroma that I associate with established starters, however there is more of this aroma than I am used to. It’s been diluted enough that virtually no plum wine is in solution. While the smell is nice it could indicate acetaldehyde or thiols.

I’ll continue to feed it daily for a couple of weeks and then use it for a bake. Barring some unforeseen event, I’ll follow up here if things change with the starter or when I bake with it.

The starter has been through about twenty total feedings so it’s time to try it out.

I got the starter going 3 days ahead of the bake to make sure it was super healthy, of course it was and was bubbling prodigiously. This starter seems to take off like a rocket. The smell the first two days was mostly alcohol and an unidentifiable fruitiness (kumquats?). By day 3 it smelled of rye and fruit but also smelled conspicuously of butter (diacetyl).

For this starter I wanted to go with locally acquired flora so I used a rye that was grown within 50 miles of my location, milled locally, and yeasty plums from next door.

The recipe is based off the Norwich Sourdough bread from the Wild Yeast Blog but with a slightly higher hydration to suit the flours I am using. They tend to absorb more water than supermarket flours.

Final hydration was 76% compared to the nominal 72% of the original recipe.

Bulk was 75° for about 7 hours, with 1 lamination and 4 coil folds (after autolyse I mixed it and left it alone, folding after returning from a long lunch). I let it bulk to about 30-40% then gently shaped, placed into a linen-lined brotform. It proofed rapidly, taking only an hour. Baked at 450° for 40 min.

The dough felt just like previous bakes. I was concerned that there could be problems with thiols but the dough behaved just as it had on previous bakes. The one difference was that it was more fragrant: butter and fruit.

The color and rise were good so apparently there were no problems converting starches into sugars.

Two surprises— it’s not as sour as rye yeast starters of the same age and regimen (though it may get there), and the flavor is unexpectedly fruity in the finish. The fruit flavor is on the back of the palate and retronasal. It’s delightful. 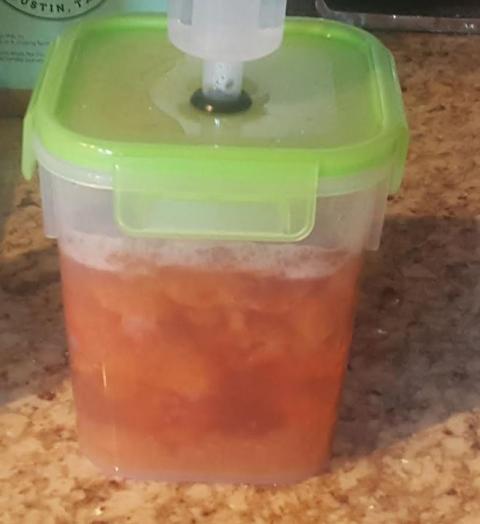 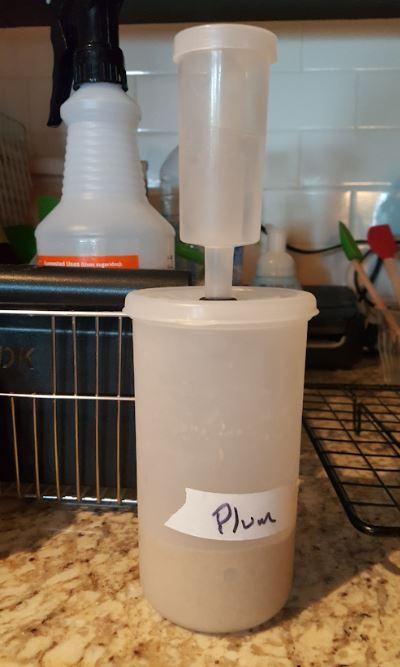 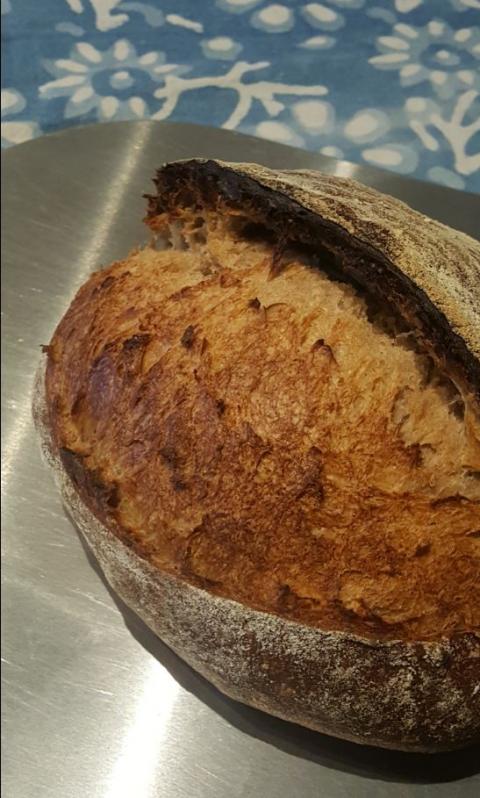 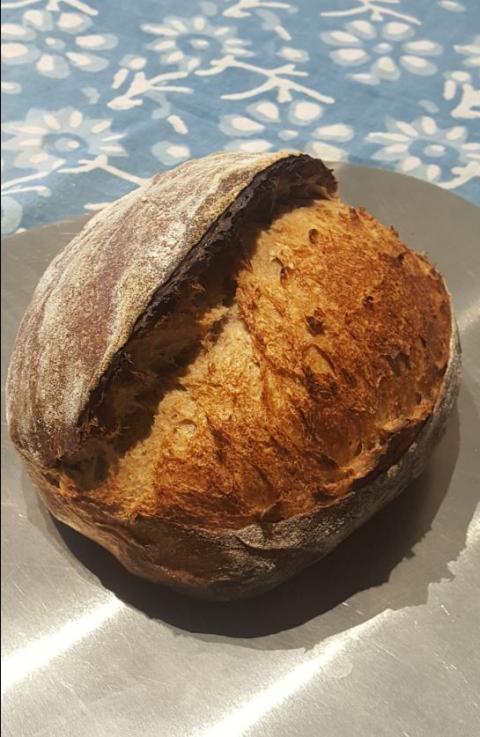 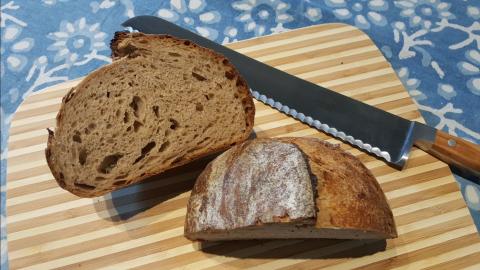 Thank you, Benny. It surprised me that the loaf had a tart fruitiness to it despite no longer having wine in the starter after so many feeding cycles. My guess is that this was malic acid created by the yeasts. from a study in 1924:

"The occurrence of malic acid in fermented products derived from various fruit juices is common knowledge and it has been generally supposed that this substance was exclusively derived from malic acid preformed in the fruit. The object of the following communication is to establish the fact that I-malic acid is a true product of fermentation by yeast and that significant amounts of the acid are formed when pure yeast cultures ferment pure sugar solutions. Experiments are also recorded in which an endeavor is made to ascertain the origin of the malic acid and also to determine some of the conditions affecting its production." - http://www.jbc.org/content/61/1/139.full.pdf

In retrospect it makes sense. However, my first starter in the 90s was built using wine from grapes and it did not have this tart, fruity flavor.

dabrownman
Sep 3 2019 - 6:02pm
Starters made with fruits and water are called yeast water

They jave been used for senturies to make great n-bead I keep 2 in my fridge at all times a Fig and an apple one.  The apple one was tarted with Minneolas from the back yard and sometimes the fig one gets fed raisins.  You can forget the argon and nitrogen.  These things are harder to kill than SD and SD won't die from a direct Nuclear strike.

Just type YW or yeast water into the search box an sit back for a good read.

BobbyFourFingers
Sep 5 2019 - 10:57pm
When does YW become a Sourdough Starter

When I did this in the 90s with grapes it created a starter that was pleasantly sour and I maintained that sourdough starter for years, adding flour and water in equal volumes at each feed. Perhaps I haven’t given this one enough time to develop its LAB.

Would you say that the sourdough starter I maintained in in the 90s, made from still fermenting wine, was yeast water since its yeasts came from the grape skins that made the wine?

I realize this is semantical but I am trying to wrap my head around the difference between YW and a traditional sourdough starter made from wine, the latter is what I am trying to do.

It seems to me, based off of the reading I’ve done here since your post:

I will have a follow up question to your answer.