My oven has just quit working and wouldn’t you know it, I have a boule of sourdough proofing in the refrigerator. I want to bake it tomorrow with my 3-burner gas grill. I’ve searched and read the available comments on the forum about baking with a bbq,  but I am looking for any tips or techniques that might augment my chances of getting a good bake on the first try. Dutch oven or pizza stone? How to prevent the bottom from burning? How to add steam? If it works, this could even become my preferred method to bake during the hot summer months. Does anyone use an outdoor method routinely? What has been your experience?

Just my opinion but I think I would try with a dutch oven and something else to insulate against scorching from the flames. Whether that is the pizza stone or just a baking sheet. Something where the flames won't overheat the outside of the cast iron pan during the bake.
Small gas grills aren't the greatest for indirect cooking, and their insulation is also not ideal. But, if you can get your dutch oven warmed up (but not overly hot), load it quickly to where it won't lose too much heat, and then protect it from overheating during the bake. It'll be a fun experiment!

I agree with Julie,  Dutch oven for sure, some cook on campfires using a dutch oven , to them a gas grill is cheating. http://www.thefreshloaf.com/node/29171/campfire-baking

Thanks for the replies. When I woke up this morning and uncovered my grill, which had been under cover all winter, I realized I only had a three burner grill in my fantasies. I have a two burner grill, to my disadvantage. With three burners, I could have turned off the center one and placed the Dutch oven there to avoid burning the bottom. I tried to raise my Lodge cast iron DO but did not insulate it well enough and ended up with a very black bottom, which you can't see in the photo. I did get lovely oven spring though, and am definitely going to give this another go (since the repairman can't come until next week to work on my oven.) 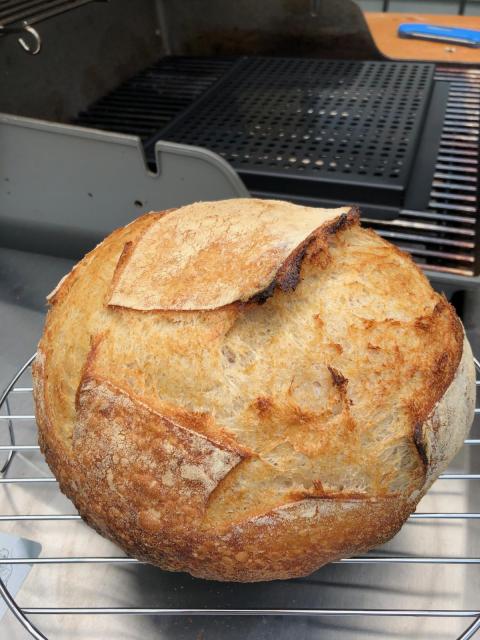 Wow, that looks lovely! Next time, maybe you could crinkle a layer of tin foil in the bottom of the DO, then add the dough on a sling of parchment when the DO is hot. I've got a slab of granite that I had cut to fit our BBQ when I got the ones for my wall oven (granite counter top off-cuts). I can pre-heat the stone, then cover the dough with a foil roasting pan as it bakes.

It still has to taste great.  Nice!

That loaf looks great.  For anyone that tries this in the future,  did you preheat the DO, or put it on the grill after the grill was preheated?

I did preheat, but not for as long as I would in my oven. I put the Lodge cast iron on the grill and turned both burners on for about 30 minutes. The thermometer on the grill showed that it reached 500 degrees F quickly and stayed steady. I turned the heat down to 475, scored and baked the bread with lid on as I usually would for 20 min. When I took off the lid, normally I'd continue to bake for another 15 minutes at a lower temperature in my oven, but I quickly saw and smelt that the bottom crust was burning, and the internal temperature was already 209 degrees, so I pulled the bread out. The top is not as brown as I usually like, but in this case that worked to the favor of the bread. It was crackling crisp but not thick--actually the ideal crust I have been trying to achieve but never have in my oven. The crumb is a bit uneven but this was in my opinion the best tasting version of this recipe I've ever produced, except for the burnt bottom. Luckily that did not permeate the entire loaf, but I plan to use aluminum foil as suggested to elevate the next bake. 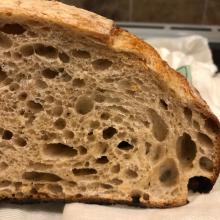