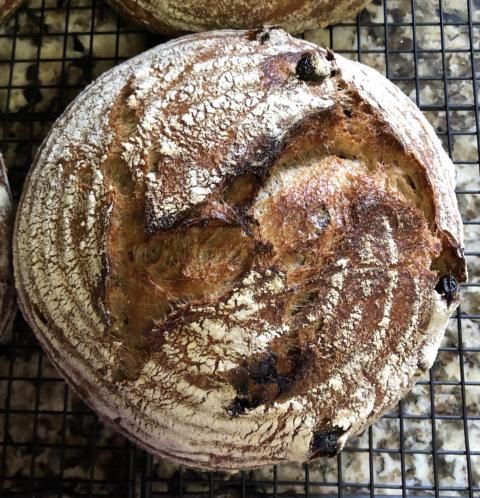 Alan posted delicious looking cinnamon raisin batards (http://www.thefreshloaf.com/node/60371/maurizios-cinnamon-raisin-levain-baguettes) so I had to jump on the bandwagon too. I scaled up the original recipe from Maurizio to make three boules of my usual size which is usually around 1100 g of flour.

I didn’t go as far as Maurizio to make my own raisins but I certainly thought about it! Due to it being a crazy week, I went with unsulfured Thompson raisins and soaked them in some bourbon overnight. His wholewheat flour was replaced by freshly milled Red Fife wheat done on the finest setting I could get on my Komo mill. I did not sift out the bran. It took a bit to find the Saigon cinnamon but one of the local health food stores had it.

As well, I used my Kitchen Aid Pro Line mixer to mix and develop the gluten instead of using slaps and folds. When it was time to integrate the levain and the salt, I put the mixer on speed one for 1 or two minutes, then I put it on speed two for 9 minutes to develop the gluten. After the 9 minutes, I added the cinnamon and the raisins and mixed for another minute. The rest of the recipe was followed as per Maurizio’s instructions. This is the link to Maurizio’s original recipe: https://www.theperfectloaf.com/cinnamon-raisin-sourdough/

So here is my rescaled recipe:

I'll bet your house smells good!  I'm not a huge fan of the cinnamon/raisin combo, and even I want to cut a slice from one of those loaves! :)  As always, your six soldiers look lovely, and I'm sure will be very well received!

came out just as well. This recipe is a keeper! 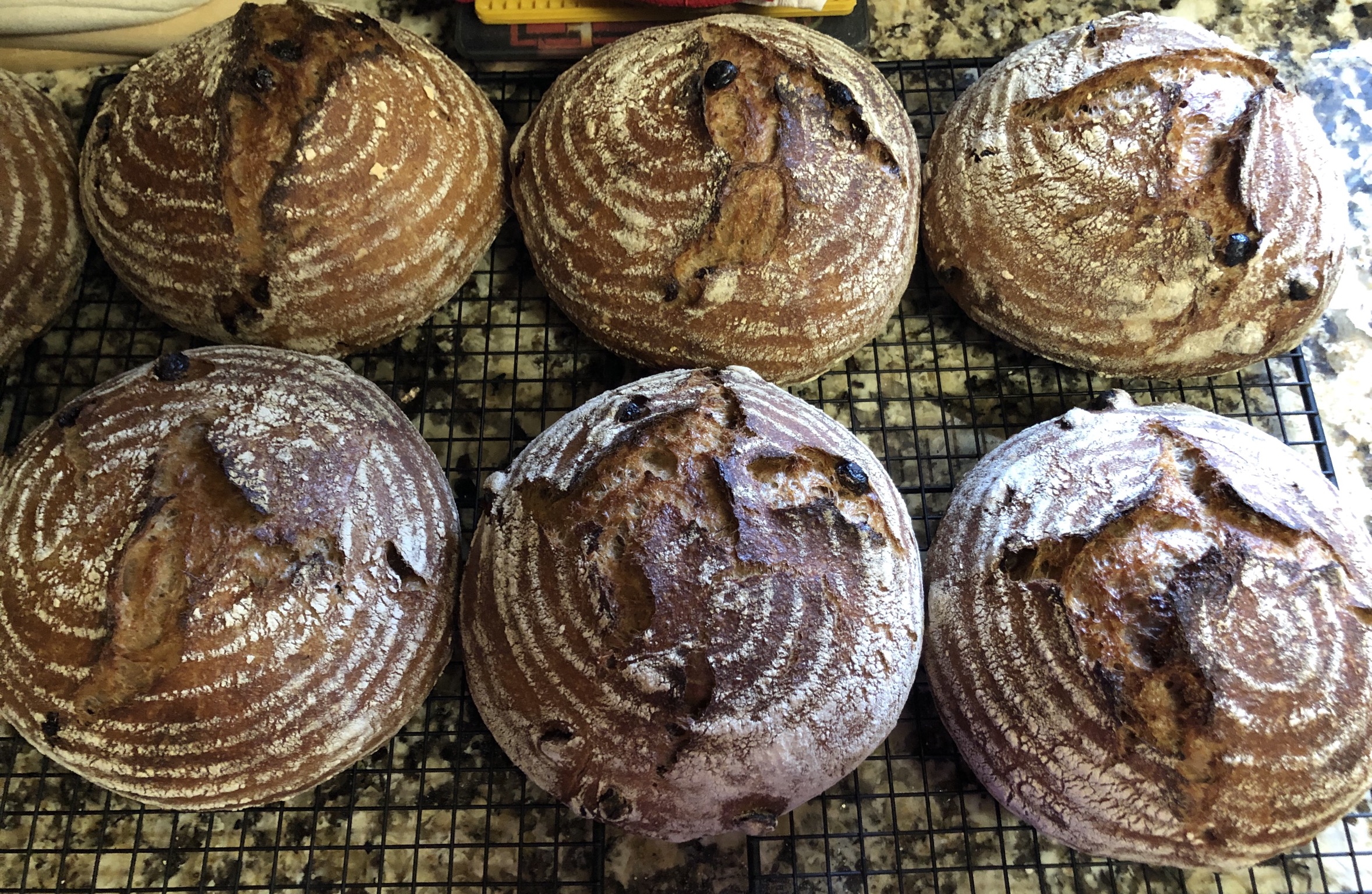 And very happy with the crumb! 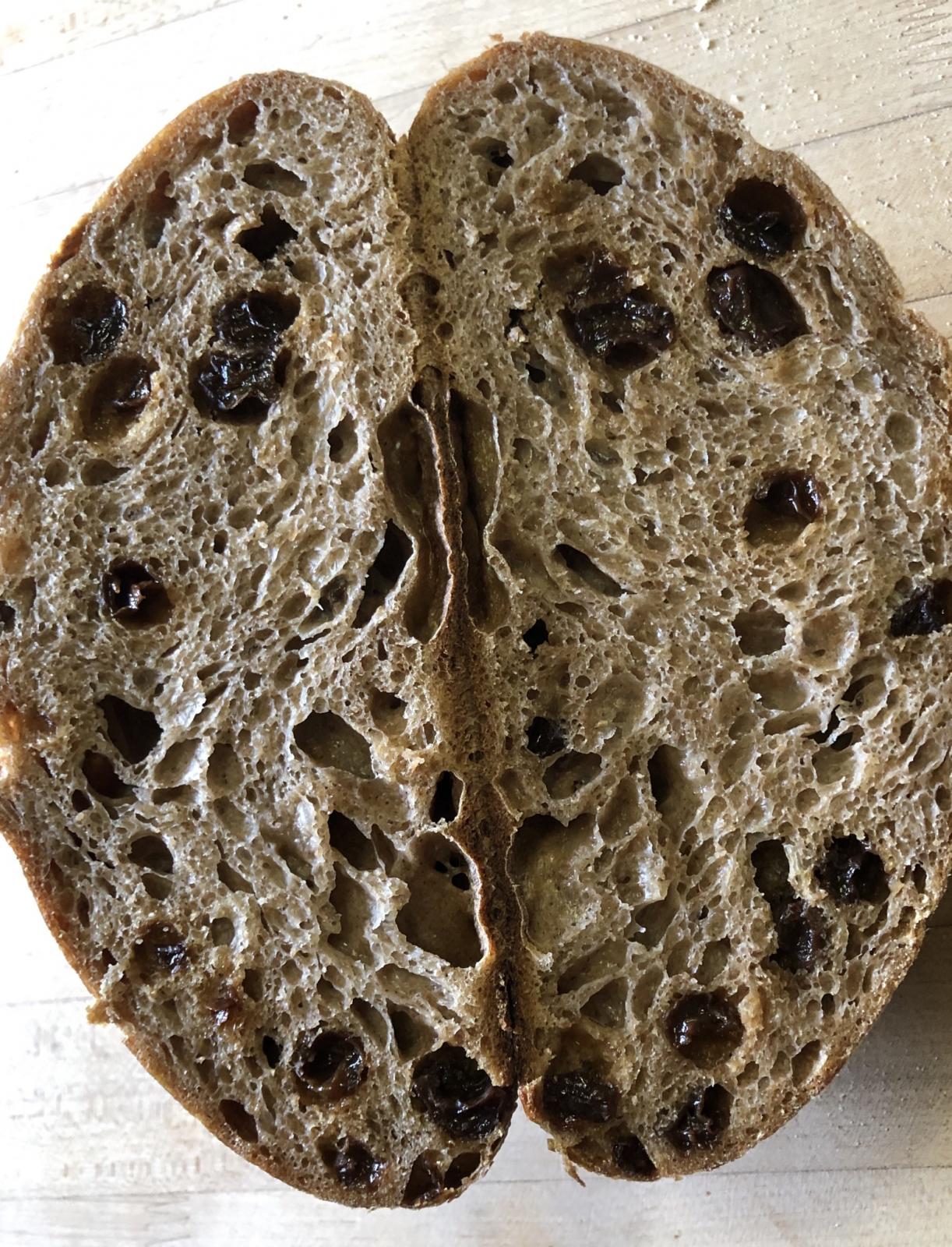 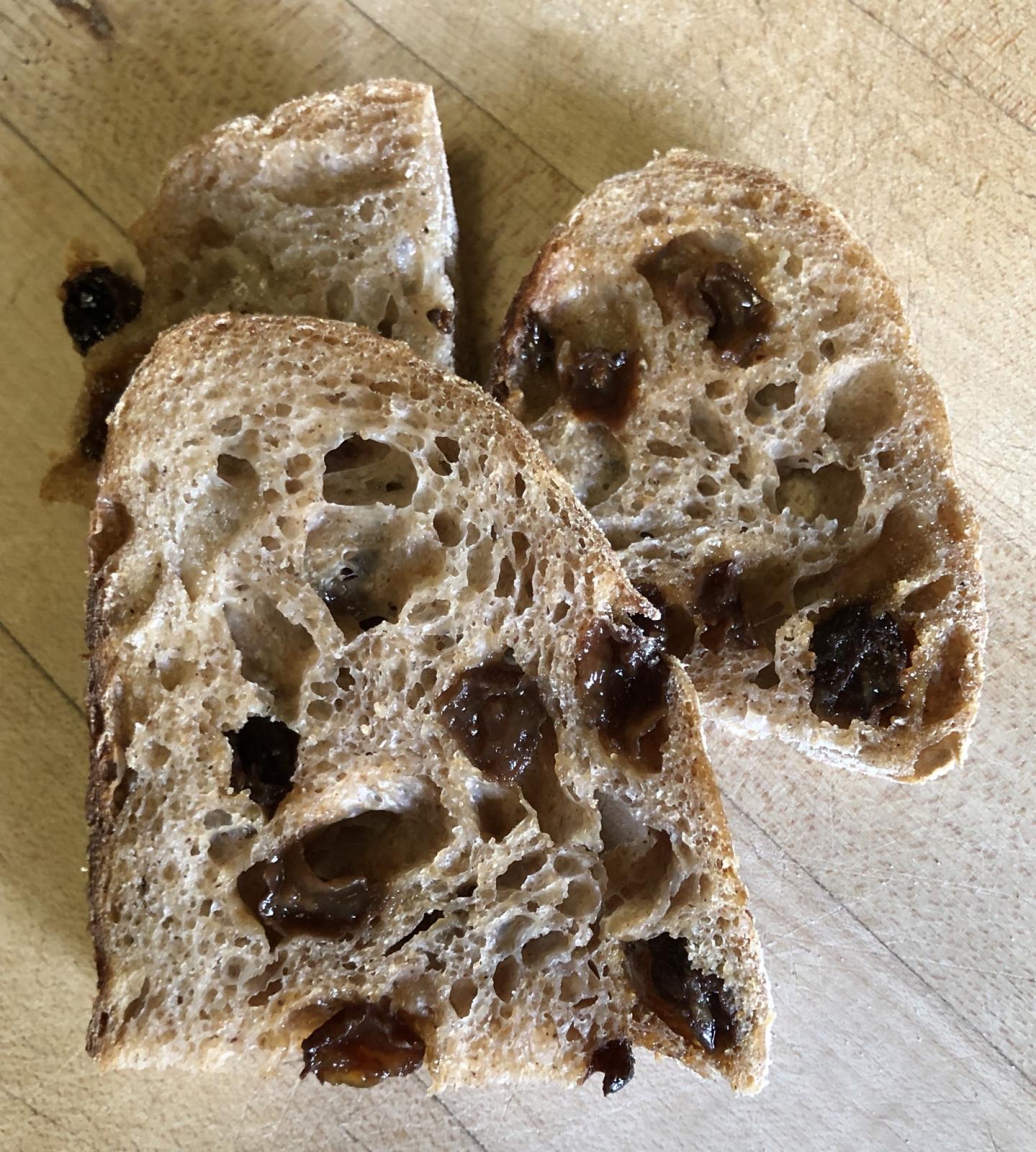 For a lot of things I am not a fan of Saigon cinnamon and prefer true cinnamon. But I am wondering if in a bread like this if the more peppery bitter notes wouldn't work well. How were the review, yours and others?

since I have regular store bought cinnamon, the Saigon and true cinnamon in the house. The regular was quite bitter, the Saigon was definitely milder and the true cinnamon had no bitterness at all. I stuck with the Saigon since that’s what the recipe called for and I really wanted the cinnamon flavour to come through. The true cinnamon was so mild that I probably would have needed quite a bit of it and since cinnamon is a yeast inhibitor, more is not a good thing.

Thanks for the info and detailed explanation - I appreciate it!

I've been shying away from adding cinnamon to dough for its antimicrobial property as well. Yours came out so well I can no longer resist doing so! I only have cassia cinnamon on hand so it'll be what going into my bread. I'd probably prefer it to Ceylon and Saigon cinnamon as it's spicier, even if people consider it "inferior". This bread shouldn't need additional sweetness anyway.

Did you find the dough taking longer to rise than usual? It's been long since I put cinnamon in bread dough that I want to know what to expect before re-attempting this.

if it took longer because Maurizio uses less levain than I usually use; 180 g rather than my usual 250 g. So that and the cinnamon as well as my lower final dough temp might account for the extra time compared to last week’s loaf which was also 30% whole unsifted grain. Last week’s bulk was 3 hours whereas this week, it took a full 5.25 hours before I deemed it ready to divide. Maurizio said his dough was ready in 4 hours, mine certainly was not at that point.

That doesn't sound like a great impart... I'll do my own experiment and see how it turns out.

The mixer works great and it sure is easier than slap and folds for this much dough but you miss the workout and have to go to the gym too:-)  It has to taste perfect after toasting and buttering!  The customers will be pleased for sure.  Well done and happy baking Danni!

I do Pilates 4 days a week and I walk 6.5 km most days for exercise so the arm workout, I can do without. 😉 Now, I just need to stop eating so much so I can drop the extra 15 lbs I put on since I started making bread. 🙄

i will have to try this one for my wife.  She's a big cinnamon raisin fan.  Love the bourbon soaked raisin idea.

idea from a recipe of Dabrownman. I since have been soaking all Raisins for muffins and other baking in bourbon. They are sooo good!

I'm going to try that recipe soon. Was wondering what to do with the leftover raisin infused bourbon ;-)

muffins or fruitcake! Or you could serve it on ice! 😉

And your detailed walk through and final results of the hundreds of loaves, maybe thousands per week that you bake, is quite helpful.  This is hardly as much a bread as it is a dessert course.  And of course it makes for marvelous toast in the morning as well.

I used plain old supermarket cinnamon, but I do love the smell and taste of it in the bread.  The raisins make the entire affair taste so sweet.

but hundreds or thousands??? I bake 12 only, thank goodness! I wouldn’t have a life otherwise and I am enjoying retirement way too much to do anything that resembles a job (well, except when I sub as a principal on occasion and then the money makes it worth it).

You should try it with the bourbon and the Saigon Cinnamon.