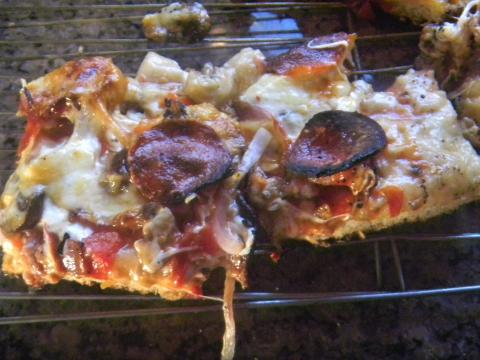 After making tortilla pizza a coupe of times we decided to go the other way with this one.  Too hot for pizza made indoors, so we decide the gas grill, with a stone, was the way to go for Sicilian Pan Pizza.  SPP isn’t like thick crust Chicago style pan pizza but it isn’t thin crust pizza we love so much either – it is more like focaccia with pizza toppings. 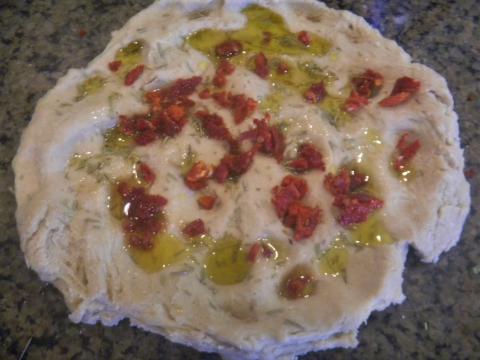 The dough was a one day affair, with no retards, made with a half teaspoon of IDY for 2 ½ C of flour. The half being sprouted Khorasan and 1 C each of LaFama AP and Safeway bread flour, 2% salt 1 T of EVOO and ½ T of sugar and about 1 3/8 C of water.  We also put in our standard 1 clove of minced garlic. ½ T of dried Rosemary and 1 T of minced dried tomatoes. 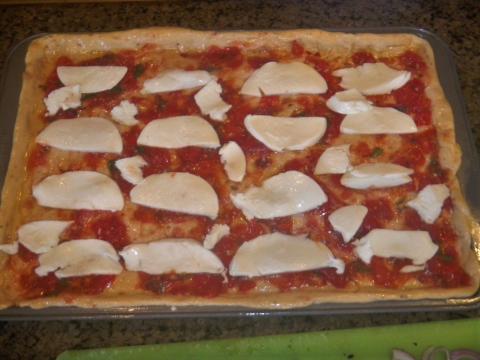 This dough makes great focaccia bread all on its own but topped with pizza cheeses, grilled sausage, smoked pepperoni, fresh pizza sauce, mushrooms, red onions and red peppers with fresh basil for garnish, you have a real winner on your hand if you don’t mess up all that hard work like Lucy did. 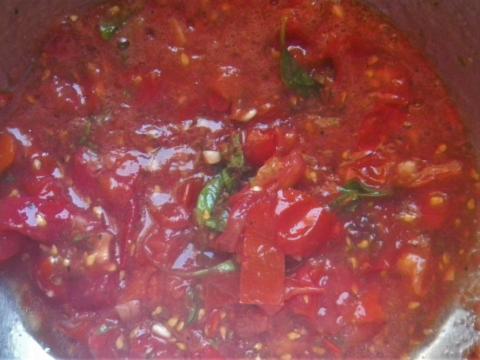 The sauce was based on Chris Bianco’s fresh sauce but modified to use fresh home grown cherry tomatoes instead of canned San Marzano plumb tomatoes plus we used Thai Basil instead if regular Genovese and we added red pepper flakes, salt, pepper and one clove of garlic to the mix and then crushed it with our bare hands for 5 minutes until it made a nice fresh pizza sauce. 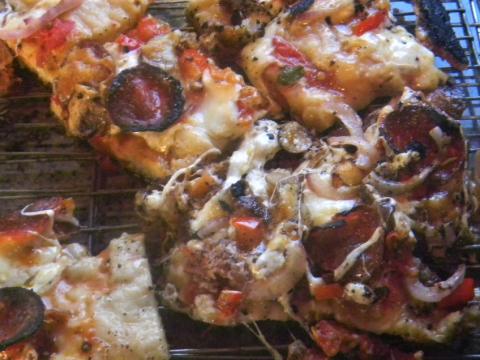 We liked this sauce a lot.  We put the stone on the gas grill and turned the 4 burners up to full whack to get the temp up to 600 F and get the stone screaming hot.  Sadly, the grill was full of grease from all the meats made on it and it caught fire with flames shooting up 2’ over the stone and smoke billowing. 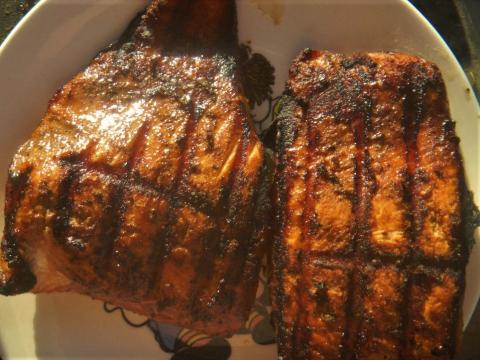 My neighbor came over thinking the house was on fire.  I showed him the grill n fire and he just laughed saying he was glad I was just stupid rather than the house on fire.  That grill hat to be 1,000 degrees for sure and it wouldn’t stop burning even after I turned off the burners. 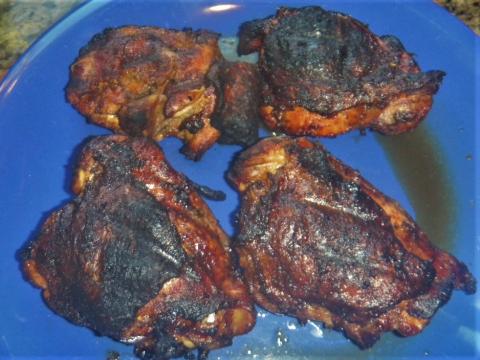 Grilled Chicken - half for tacos.

Soot covered the entire patio concrete and the outside, of the once shiny stainless steel grill, was black.  When the fire finally went out I waited for the temperature to get to 450 F before firing up the burners manually on low because the battery for the igniter had melted.  Oddly the once dirty stone was completely clean like it had been in the oven on cleaning cycle. 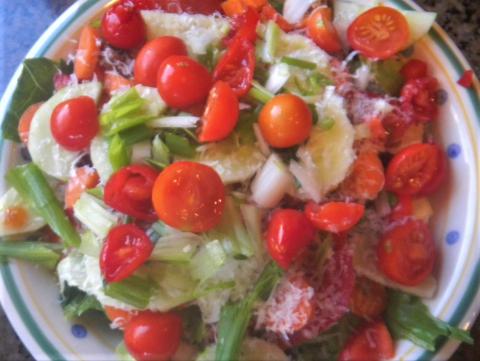 There is that salad ....or two 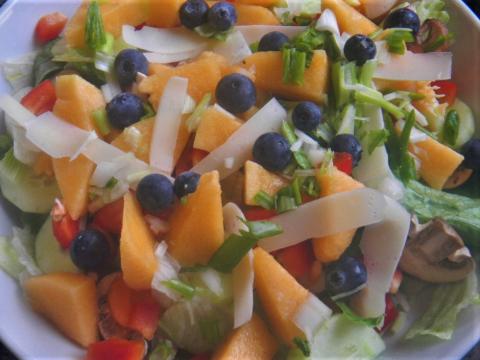 When The temperature got back to 550 F, the same temperature I make pizza inside in the oven, I put the panned pizza on the stone and closed the grill setting the timer for 5 minutes.  Normally it takes 7 minutes inside to get a thin crust perfect, but when I opened the lid to check it, the crust was totally burnt around the edges dark as charcoal as was most of the bottom. 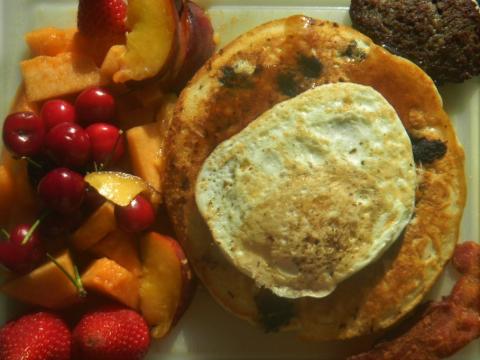 A bake day SD breakfast or ......another omelet or two 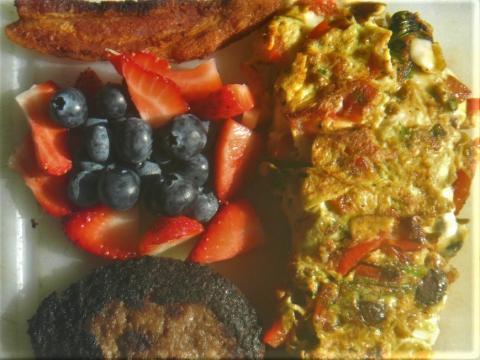 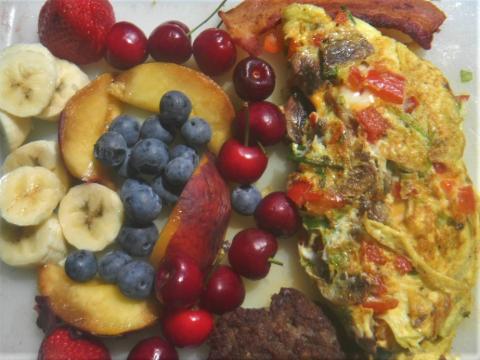 I forgot the stone was lagging in temperature and still about 800 F when I checked it with the infrared thermometer. 2-3 minutes would have been way, way better for sure.  Better to use your tools before committing the pizza to the stone for sure but – oh well, maybe next time. 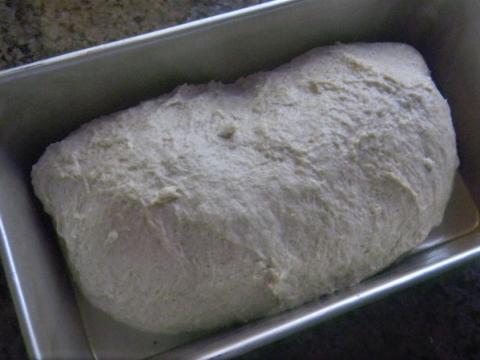 My wife just cut off the burnt bottom and said the edge pieces were fine.  Being lazy,  I ate the middle of the pie that was not nearly as burned without cutting off the dark part.  it didn’t taste burnt but was crispy like no thicker crust style pizza ever was supposed to be. 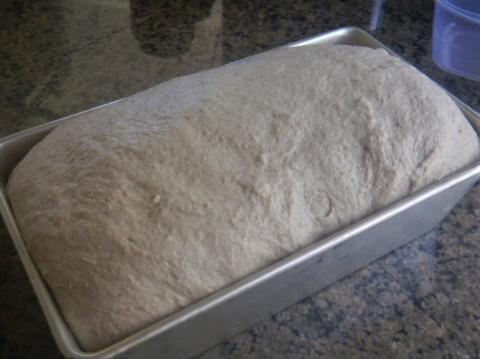 So, all is well that ends well. Next time, Lucy will remember to empty the drip pan and the slide out bottom of the grill like normal people do before making pizza on the grill.  Thankfully we also got a chance ti redeem ourselves by making my wife’s Sourdough Sandwich Loaf with a 22 hour retard.  It turned out way, way better than the pizza for sure. 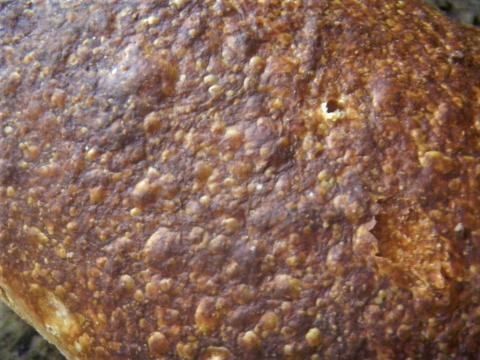 This one very similar t the last 2 except it has 20% whole grains, all of it in the 100% hydration levain begun with 15 g of NMNF starter.  Once the larger than normal levain had doubled, we retarded it overnight for 12 hours to bring out the sour. My wife is liking sour bread recently. Yea! 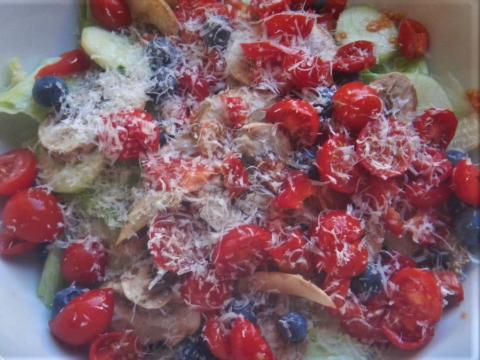 We eat a lot of salad.

We also had 5% each Sprouted Spelt and Sprouted Khorasan in the dough flour with the remainders split half and half with Signature bread flour from Safeway and LaFama AP.  We upped the hydration to 80% for this one too keeping the PH sea salt at 2% 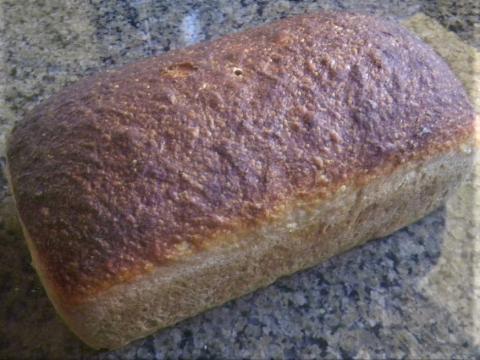 The method was a bit different with only 2 sets of slap and folds. of 100 and 50 slaps and 2 sets of stretch and folds from the compass points - all on 45 minute increments for a change.  After shaping and placing it into a wide loaf pan sprayed with pan release, we let it sit for half an hour before bagging and putting it into the fridge for a 22 hour retard. 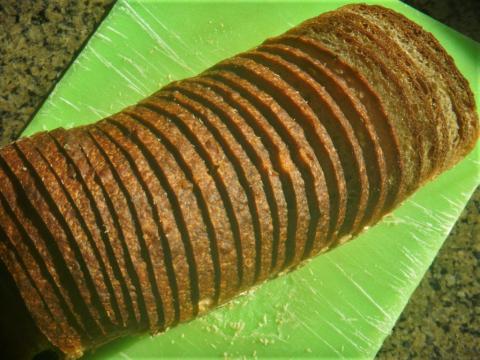 It wasn’t quite finished proofing so we left it on the counter for another 2 hours before spritzing the top and baking it in a 500 F preheated oven with lave rocks for Mega Steam.  We turned the oven down to 450 F when we closed the door after putting 2 C of cold water on the hot rocks.  After 18 minutes of steam, we took the rocks out of the bottom of the oven and turned the oven down to 425 F Convection for another 18 minutes ff dry heat. 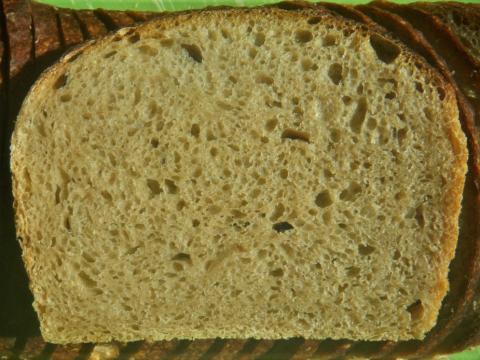 When it hit 207 F we moved it to the cooling rack.  It Blistered and browned well but the bloom and spring was limited because it was 100 % proofed when it hit the heat.  The crumb came out perfect for sandwich bread and the way my wife likes it.  The next morning when I sliced it, the crumb was moist, soft and sour with a nice tang. 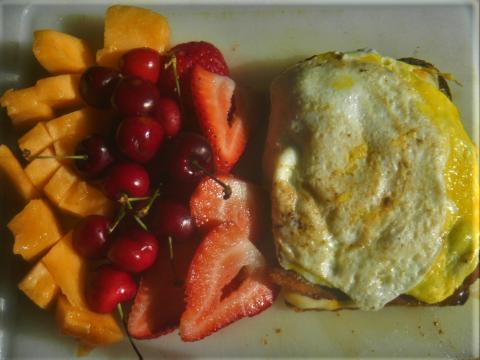 Breakfast Sandwich with this bread

This is one of many delicious white sourdough breads that everyone should at least like a little bit.

Sorry to hear about the mini fire. The pizza still turned out looking pretty killer even with the slightly over-charred crust :)  If your neighbor knows you and Lucy well, he'd have guessed what really happened. He came over pretending to check the fire out but was in fact after the chicken and salmon, no?  If you get your pizza in when the grill is 1000 F, it might be ready in a minute. With charred spots and smoky flavor too, I bet. How cool is that! That's even hotter than a wood fire oven :)

After all the upgrades, that's no longer Chris Bianco’s but Brownman's fresh sauce. I much prefer your version with the Thai basil and red chili flakes. Cherry tomatoes always beat other heftier tomato varieties in my opinion. Not having a garden myself, I can only imagine how far superior home-grown cherry tomatoes are to the ones in supermarkets! Every time after reading your post, I have a sudden urge to make a hot & cheesy omelette and a cool & refreshing salad to go with it. Seriously, I need a fridge just for storing fruits and vegetables... And maybe another for retarding dough... Well, an extra freezer for meat and seafood can't hurt either, right?

The bread looks really nice this time. It has the perfect crumb for sandwich bread. Spelt and kamut are such a nice combo, I used it in my bake this week too. You're right that no one should refuse having a slice! Nice bake and happy baking!

and one for whites and that can double as a cooler for bread.  The freezer is must too.  Now you don't even have to shop every day for fresh veggies - you can just order them and have them delivered to your door. we can get them delivered autonomously by robot to our door here in Phoenix too from Kroger's Fry's.  With a white wine cooler at 37 F, you don't even need a fridge since condiments and other drinks can go in there too.

I remember the first time Lucy made bread in our old GE oven oven  - Old Betsy.  It hadn't been cleaned for a while and 7 years ago I decided the first TFL bread Lucy would make was David Snyder's San Joaquin. We cranked it up to 500 F to preheat and it smoked like a choo choo train, setting off the smoke detector.  So nothing has changed in 7 years except the smoke is way bigger and now we have added massive flames to it:-)  I'm pretty sure Lucy could sell tickets to her next conflagration event.

Glad you liked the post and good luck finding room for all of those new appliances.  We have a lot more room around here since the daughter got married and moved off to Seattle so I have room for another wine cooler for sure.  My wife says I can't have one just for Reds .  It is so odd.  The more she says it, the closer it comes to reality:-)  Weird how that works!