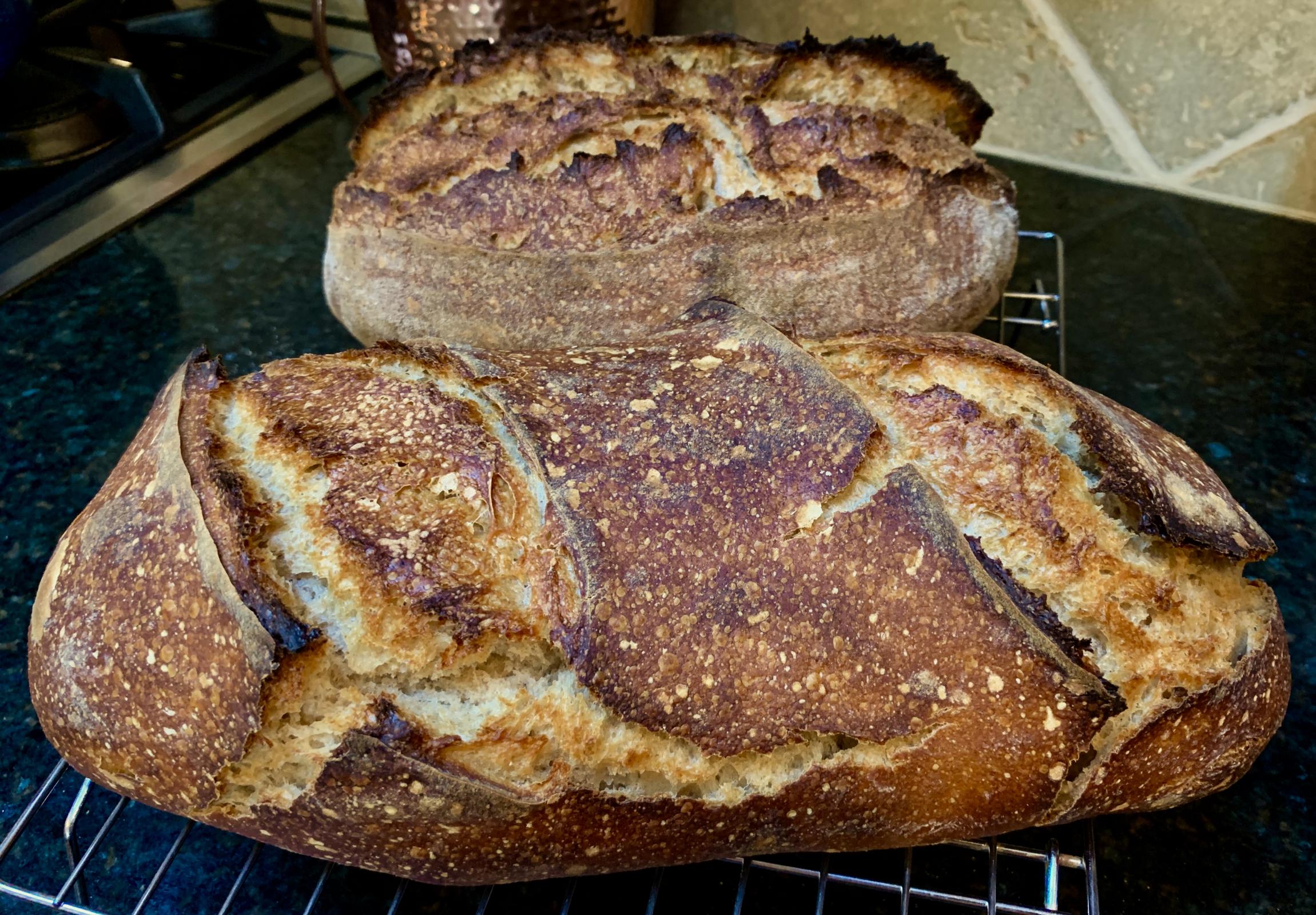 The rest of the process was my usual pre-mix all but the salt, rest 30, pinch salt, slap/fold about 25 times, rest 30, stretch/fold then proof at 75F.  I let it go longer than usual as it was still feeling dense at about 2 hours, my total bulk fermentation was 4.5 hours at 75F.  I gently did a four corner stretch/fold, then tipped the dough out, divided and pre-shaped.  Finally I shaped and placed into bannetons lined with dusted tea towels.  Proofed at 75F for an hour, then into the fridge for 3 hours.  Baked with steam at 475F for 15 minutes, uncovered for 20 minutes.

I found the way these loaves expanded from my scoring to be interesting.  The first one had a single slash along the long axis, but looks very "rocky" in appearance after baking.  I have seen this before, and I think it's due to the tea towel wicking away more moisture than when I just used a naked banneton dusted with rice flour.  Here's a shot of that one: 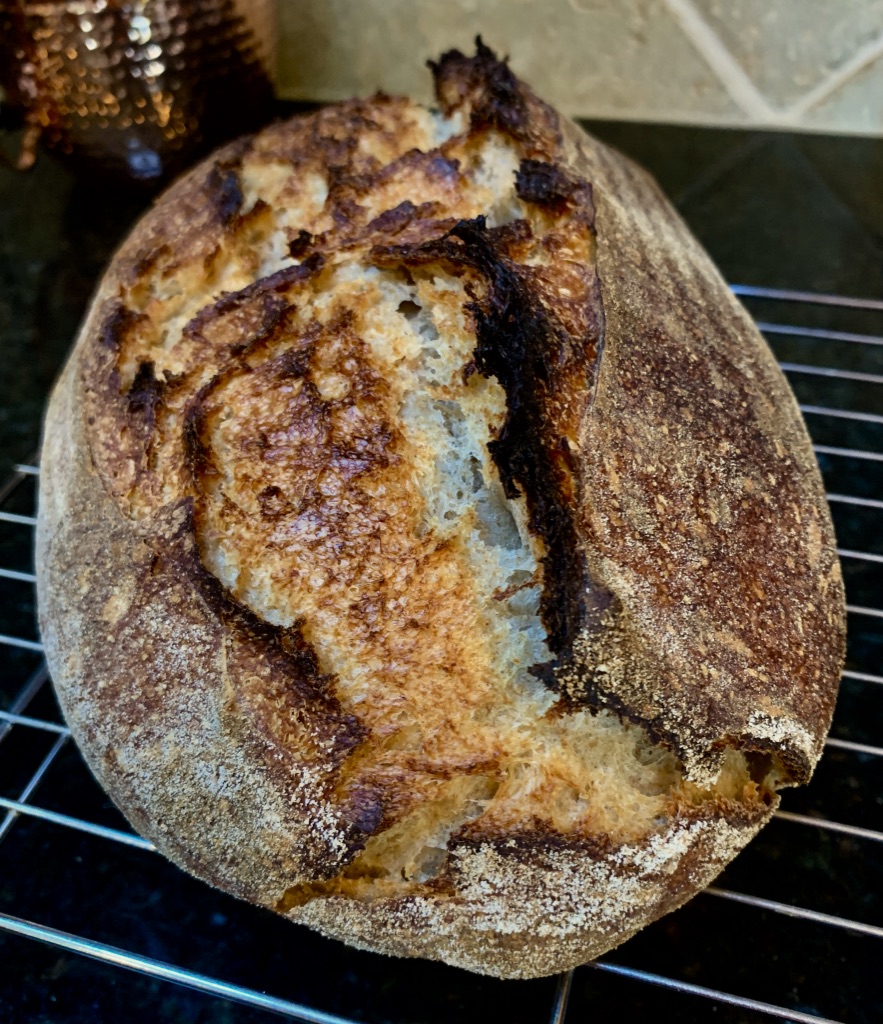 The second loaf got two diagonal slashes, which, in retrospect, I should have aligned to be a bit closer to vertical, but the goal is to eat it, not look at it! :)  These slashes seem to have just blown apart, and I again think that the moisture removal from the tea towel is the culprit (I don't really care, I just think they look kind of neat....like the jagged appearance.)  Loaf #2: 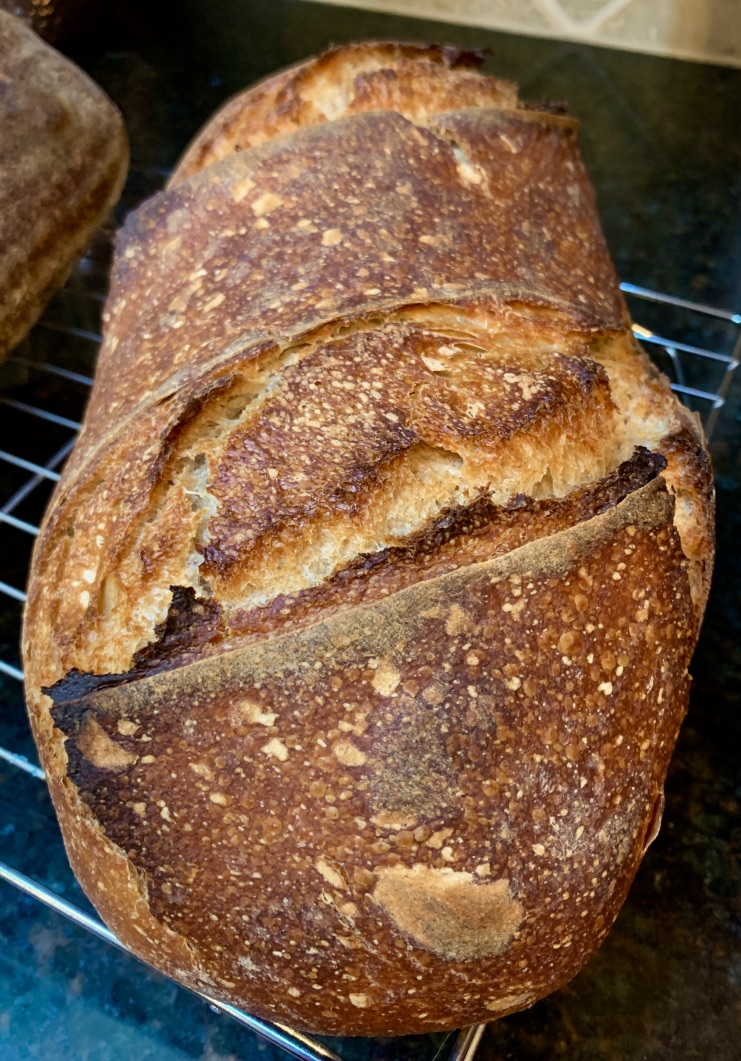 I'll post up a crumb shot once these are done cooling.  Bake on!

Man, those ones look fantastic! That's making me hungry.

They both look great.  Yes please post a crumb shot too.

Glad I gave my starter some proper care/feeding....seems much happier now!

My usual "all purpose" crumb.....good for holding onto butter, spreads, peanut butter, etc. :) 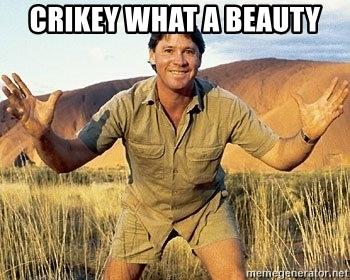 Community Bake - Baguettes by Alfanso
Tips Needed
Any Online Baking Supply/Ingredient Sources?
Change in yeast = failure
How do you know when your dough is properly...
END_OF_DOCUMENT_TOKEN_TO_BE_REPLACED