Bought a house with a brick oven in the back yard

Bought a house with a brick oven in the back yard

I bought a house with a wood burning oven in the backyard. So far I've only used it to barbeque, but I'm wondering how to bake bread/ pizza in here? Any books or vidoes to recommend? What would be the best fuel? How much would I need? How long would it take to get it up to a temperature for baking? Probably a lot of fuel and it would take a while so I'm considering opening it up as a community oven for anyone who might want to try it, rather than do it for a couple of loaves of bread at a time. 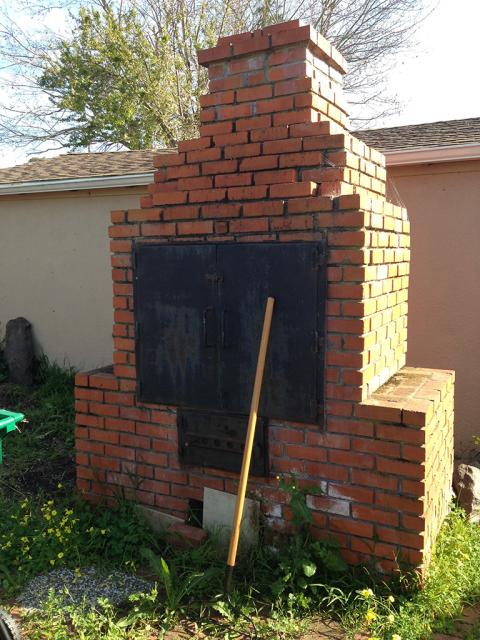 a few more pics would be nice, inside, measurements and the like.  Other bricks inside?

Hah yes, the oven was a big selling point. Approximately 39" wide by 27" deep. The baking area is approx. 30 tall but there's space underneath for the ashes to fall. There is one rack for baking, no bricks. I could have more racks made but they're expensive. 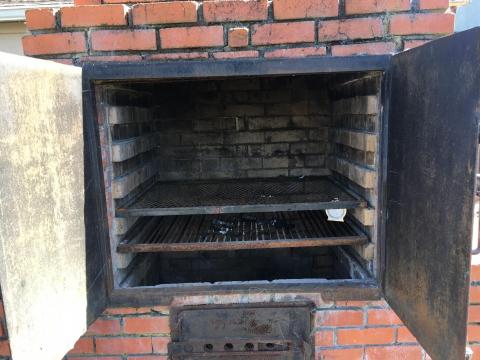 Is there a way to close off the chimney to let the heat soak into the oven brick? A damper, perhaps at the back or a solid shelf that can be slid into top shelf of the oven.  Does the chimney vent the baking chamber directly from the top of the oven or a bit lower or behind the back wall?  Hard to see detail in the back wall brick (nothing a good burn wouldn't clean up) but looks like there could be vents or loose brick plugs back there.

Is the steel door insulated?  Looks massive.  Love the steel, most likely the most expensive part of the oven.

There is a tiny red brick just above the oven door, in the middle, does it move?  Is it loose?

I keep editing this post. Sorry.  Another thought.  Before heating this oven up, even just to test or clean it out, contact your local fire inspector or chief.  I'm looking at the wood building nearby with a tar shingle roof.  Some kind of spark "net" might be needed on top of the chimney to prevent large sparks from escaping and landing on the roof, just a thought for safety's sake.

The safety comment is especially important if you're not sure when it was last used. Sometimes when people leave a place, they don't get a chance to complete every item on their to-do list, and "Fix an oven that I'm never going to see again" is a pretty low priority. Unless you know it was just done, get it checked over - either by the proper authority, or by its builder if available, or even both.

Spend the money now, take the inconvenience now - and long and happy baking after that!

Hi, this oven looks more to be something used for grilling or smoking meat. Typically ovens used for baking that have a chimney/or not, are usually not within the baking chamber, if they do they have a damper installed. It easy enough to put a stone on top to keep the heat in once the oven is to temp and all the ash is removed.

to turn this into a baking chamber for bread or pizza, I would see about getting some used firebrick and a thick used commercial pizza oven stone, you could place that at the very bottom and use it as your baking floor, I would make a steel frame for it to all sit in. the frame then the Brick then the stone on top of the brick. Basically the fire would burn on the stone until the oven reached temperature, probably a steady 400 - 500 F. then you would close off the chimney, sweep out all the ash and let the oven equalize, then you would be ready to bake. for pizza you typically want a fire going in the chamber on either side and use the clean side of the baking floor to get your pizza going, this usually requires 700 F and above to get decent results for a wood fired pizza.

so with a few modifications and some testing I think it would be a fantastic oven for baking.

one other option you could try as is with no modifications, for bread is a cast iron(dutch oven) with fire going in chamber with the cast iron pot on one side.

I also agree making sure its safe, its hard to tell if the top of the chimney has a spark arrest. Its typically just a raised stone above the chimney so if sparks are flying out they don't just fly off all over the place and cause a potential fire hazard to surroundings.