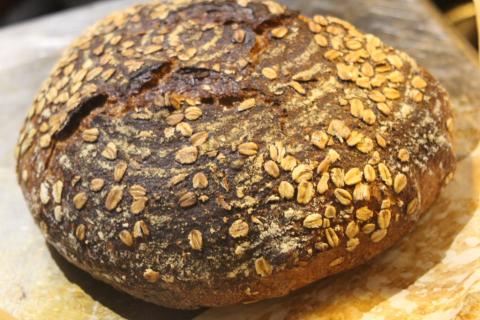 This was made using King Arthur bread flour (12.5% gluten) and King Arthur whole wheat, and Marizio's process was followed modulo any discrepancies recorded in the notes below.

The porridge was much easier to incorporate than the first time because it was cooked more carefully and was therefore less stiff. The oats were cooked in a sealed pot, and were moist and surrounded by gelatinized starch, but any free water had been absorbed.

The porridge was incorporated at the same time as the salt.

In an effort to reduce the sourness, this loaf was proofed at the high temperature of 87F for 3.5 hours (about 40% volume increase? it is hard to tell). Coil folds were performed at half-hour intervals for the first 2.5 hours. The loaf was then preshaped, rested for 15 minutes, and shaped. Shaping was difficult because the dough was on the wet, sticky, and loose side. The loaf was then proofed for an additional 3 hours at an ambient temperature of 80F in an 8-inch brotform. By the end of the final proof, the loaf's edge was about 1 cm below the edge of the brotform.

The loaf was placed in a dutch oven preheated to 475F to bake. The oven temperature was immediately reduced to 450. The loaf was baked for 20 minutes covered, then 25--30 minutes uncovered.

The flavor of the loaf ws less sour than last time, but still more sour than might be desirable. With careful management of starter and fermentation, it seems possible to get it even less sour. The texture of the crumb was lighter than last time and just as tender.

DanAyo has recommended trying yeast water to reduce sourness, which will likely be done in the future. It also seems possible that sourness could be reduced with more careful management of starter and fermentation.

Questions will be posted in the CB thread.