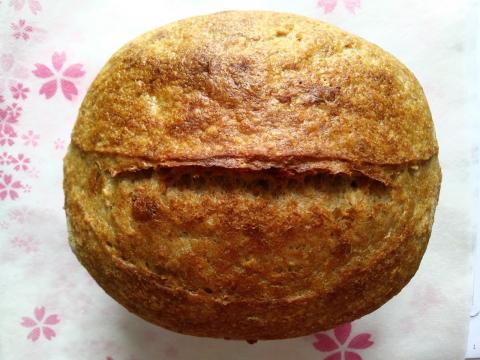 I followed most instructions of Maurizio with a few minor changes:

1. Using extra thick rolled oats instead of regular oats. Yes, Maurizio emphasized on using regular oats but I always use what I have on hand. Why didn’t I coarsely pulse them in my food processor? Well, who wants to dirt it up for 60 g of oats? Not me... Therefore, I upped the water for the porridge slightly.

2. Adding cold porridge to the dough. I made the porridge ahead of time and refrigerated it. The trouble of letting it warm to room temperature was just too much for me.

3. Subbing half of the whole wheat with spelt. To compensate, I held back 10 g of water (approximately 4.2% of dough hydration excluding porridge). 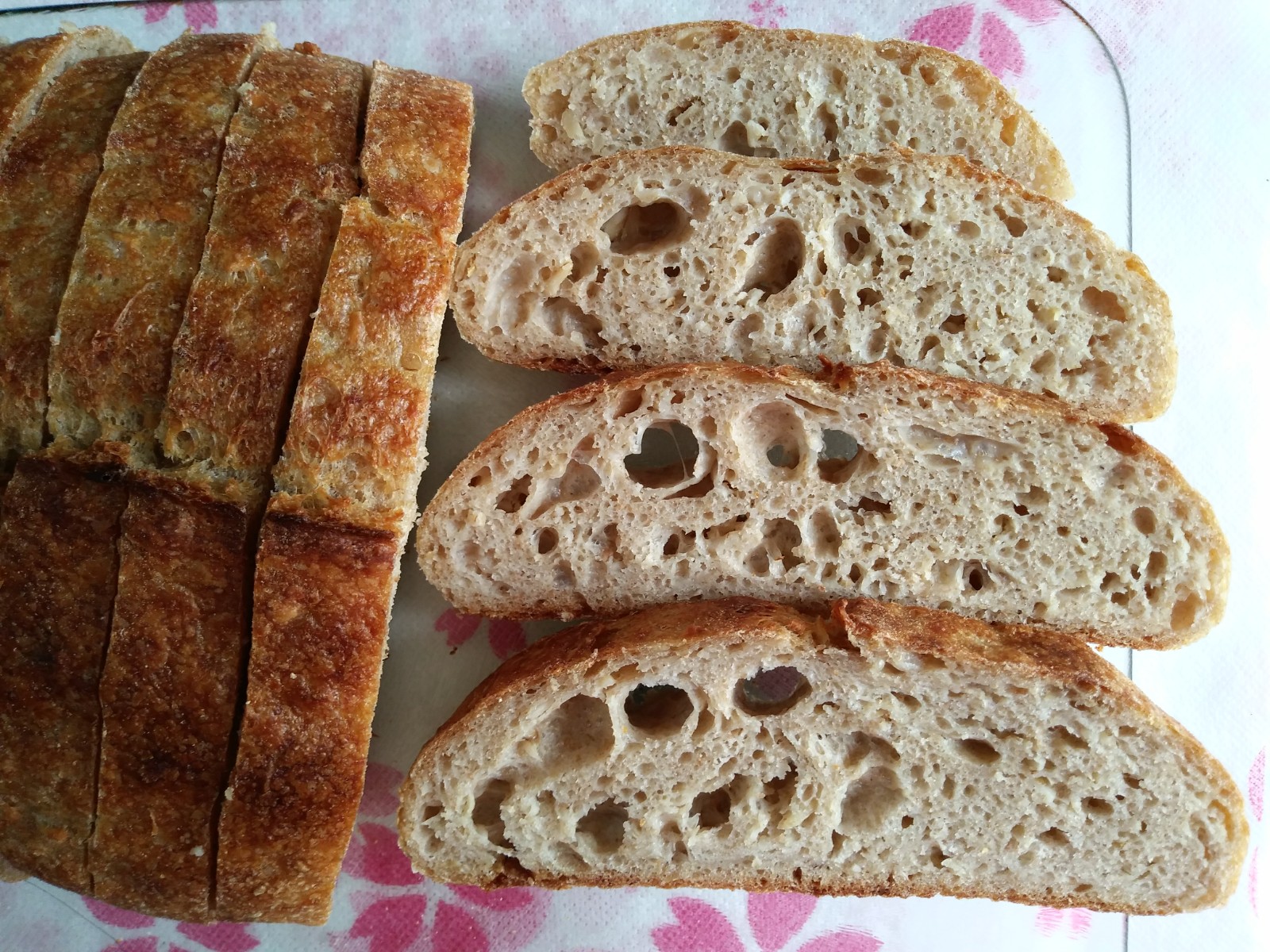 Make the porridge by bringing the water to a boil and pour the oats in. I turned off the flame and let them sit for 20 minutes. It was then refrigerated until used. 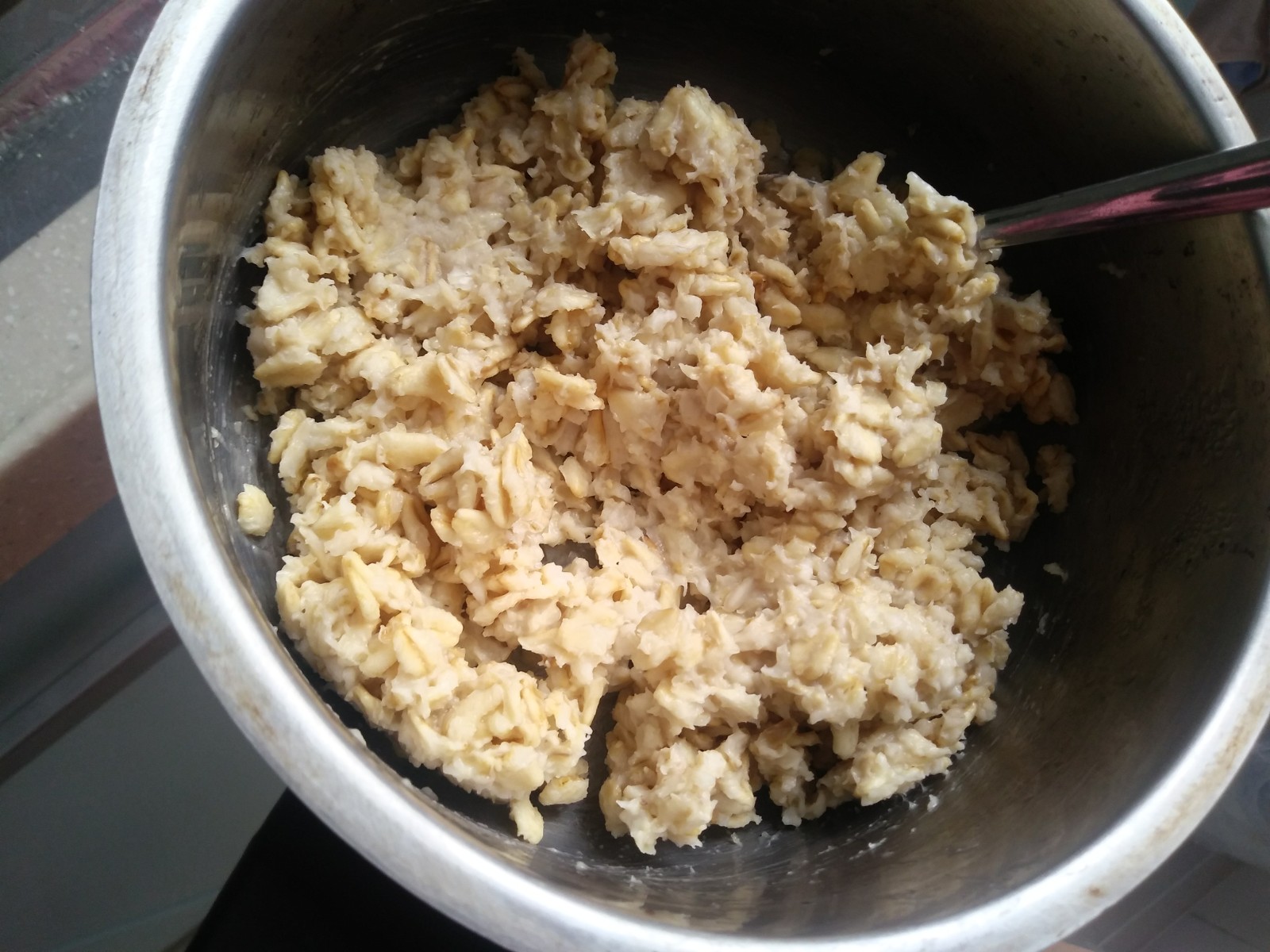 After that, all dough ingredients except the salt were mixed for 1 hour psedo-autolysis. The salt and cold porridge were then folded in to ferment for 3 hours 15 minutes longer. A total of 3 sets of stretch and folds were constructed at the 1 hr, 1 hr 30 minute and 2 hour mark. 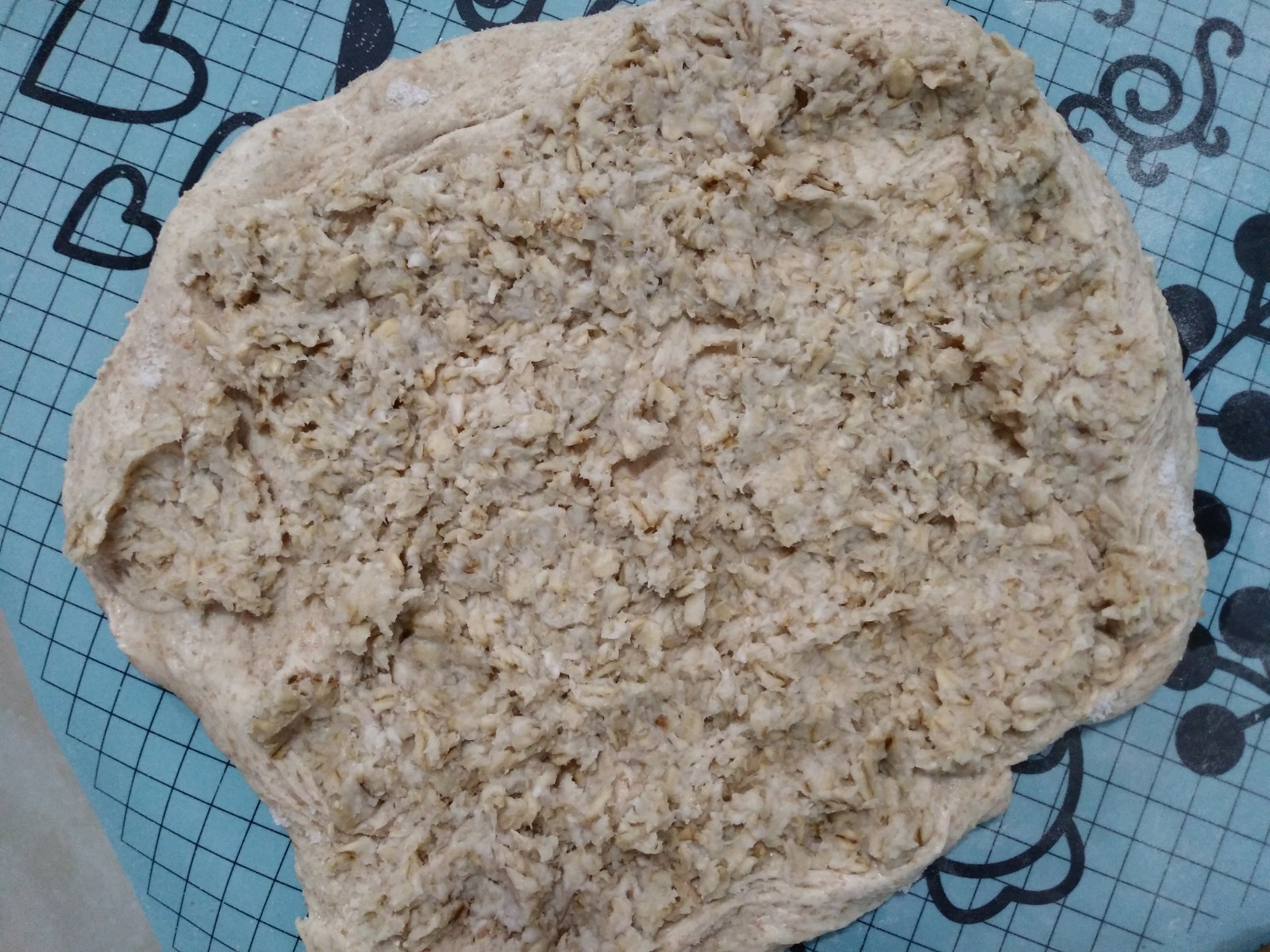 Incorporating the salt and porridge

The dough was directly shaped (no pre-shape because it didn’t need it) and put in into a banneton. It was retarded for 9 hours. 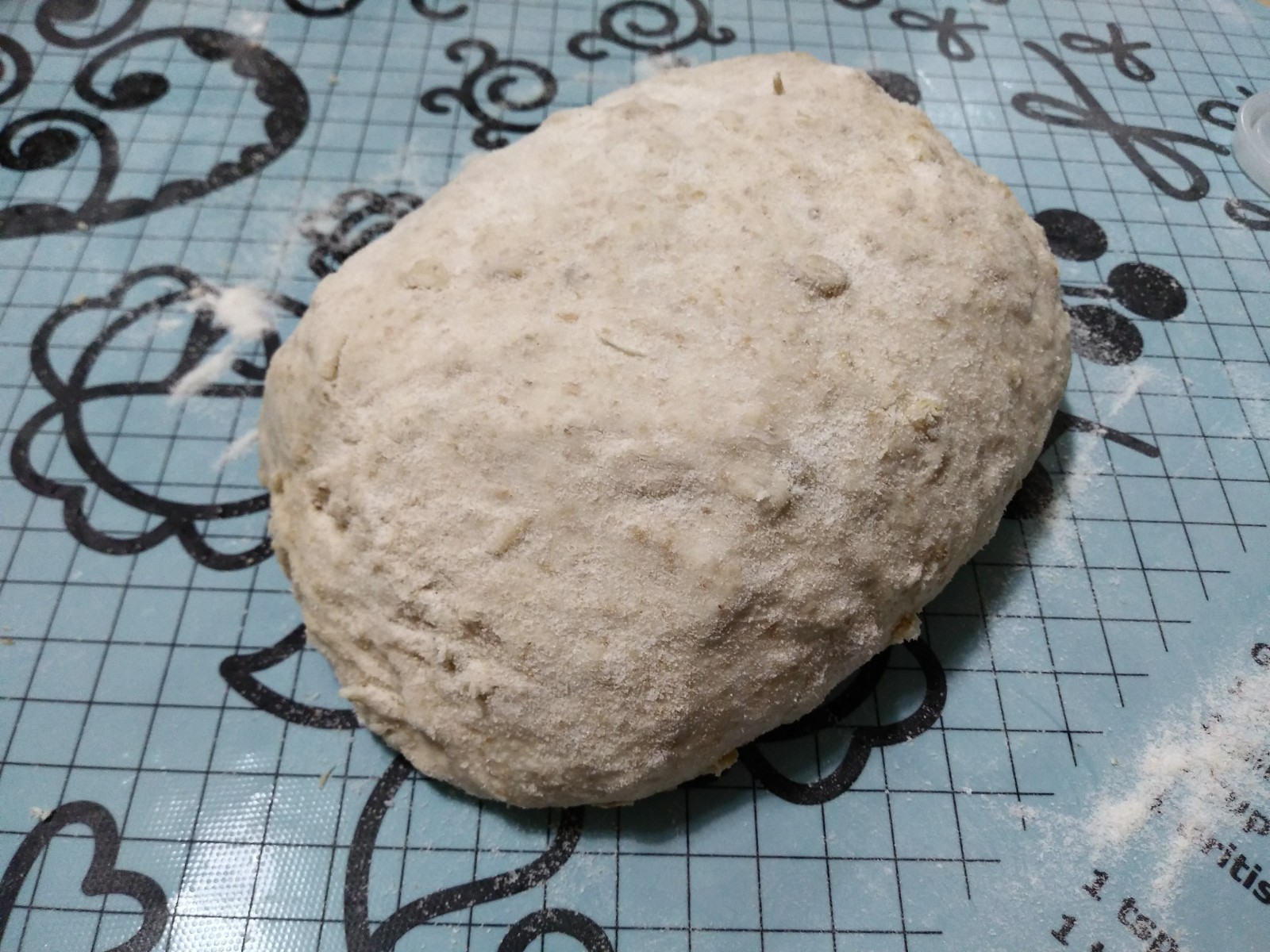 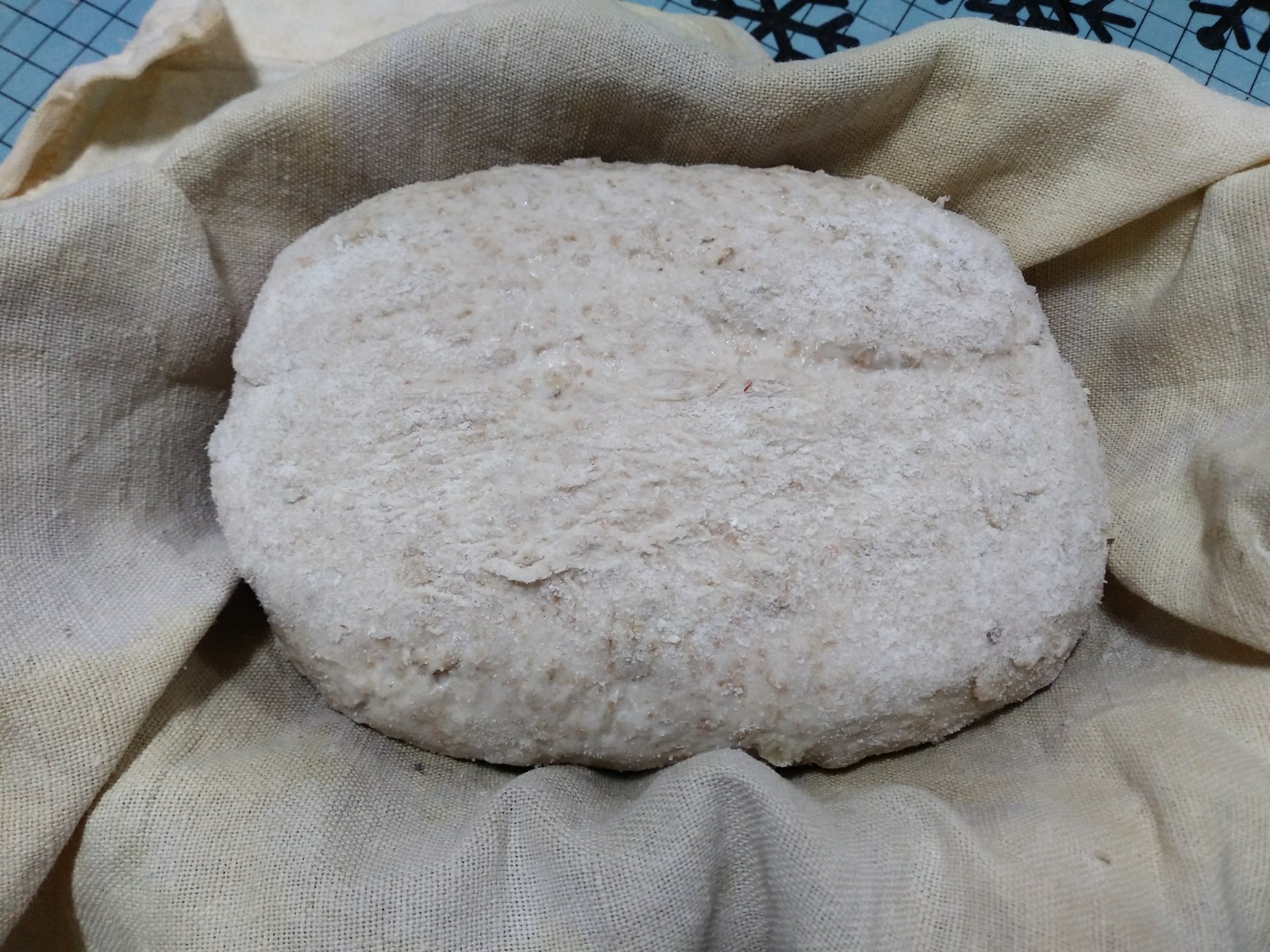 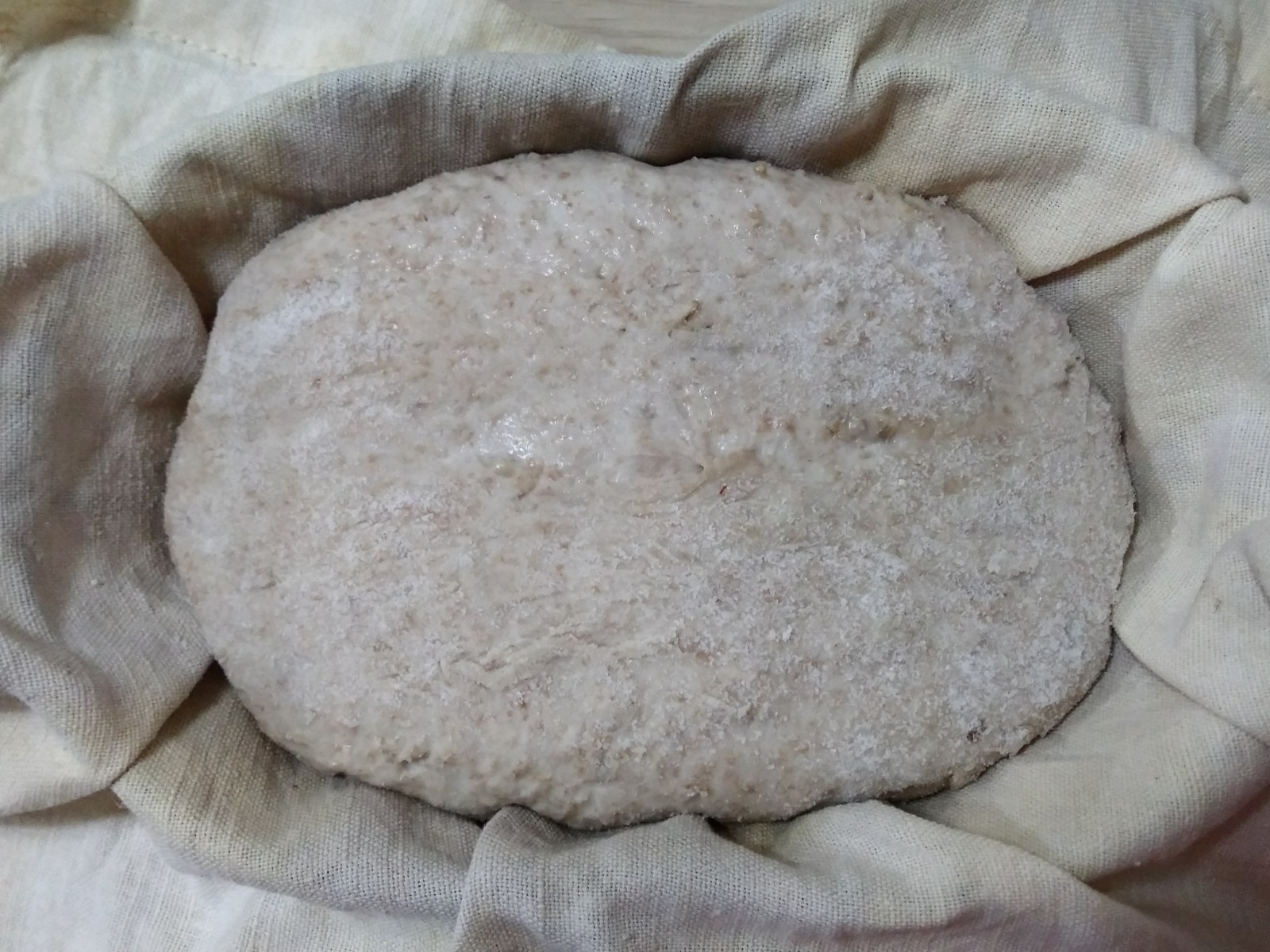 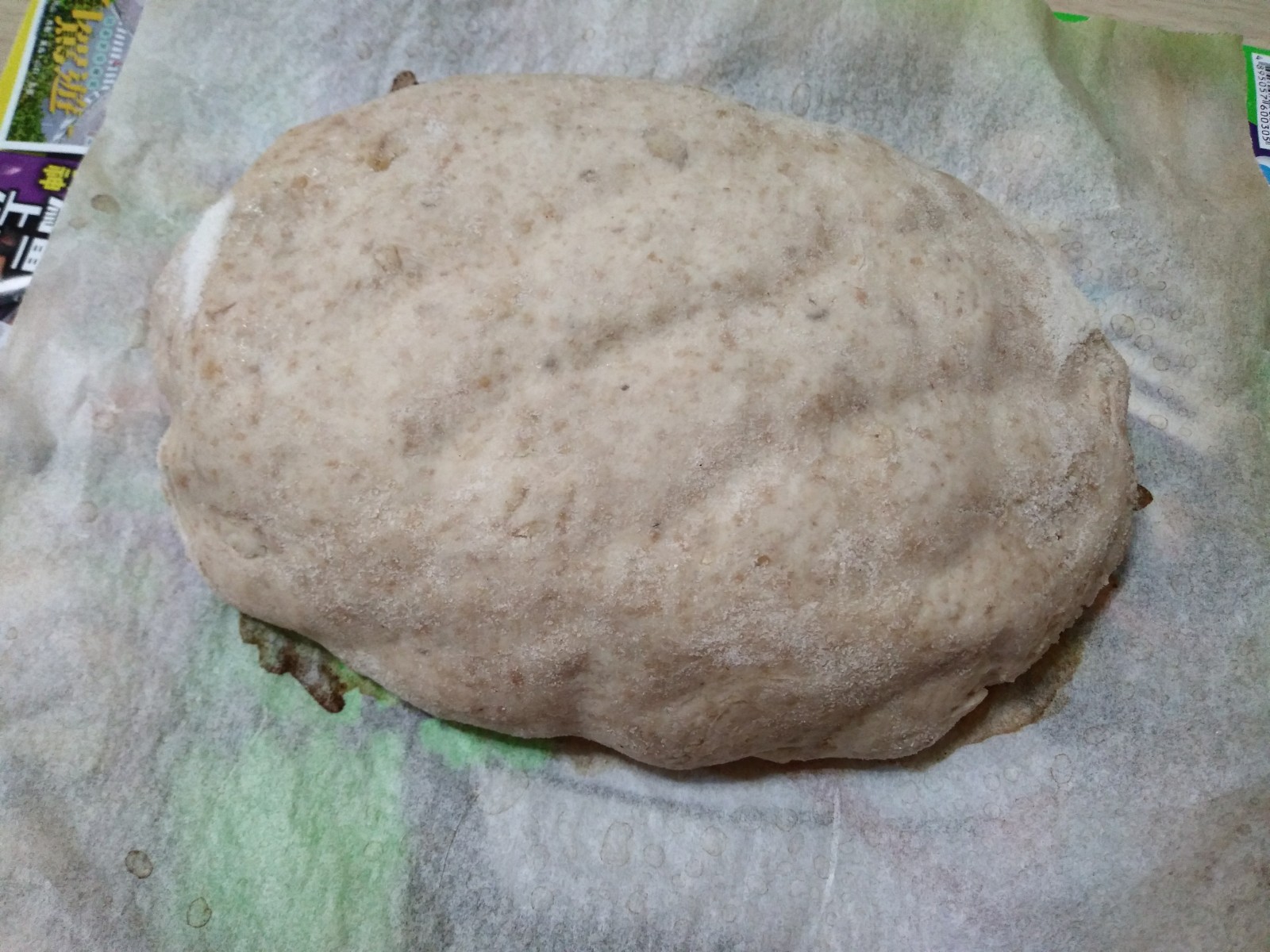 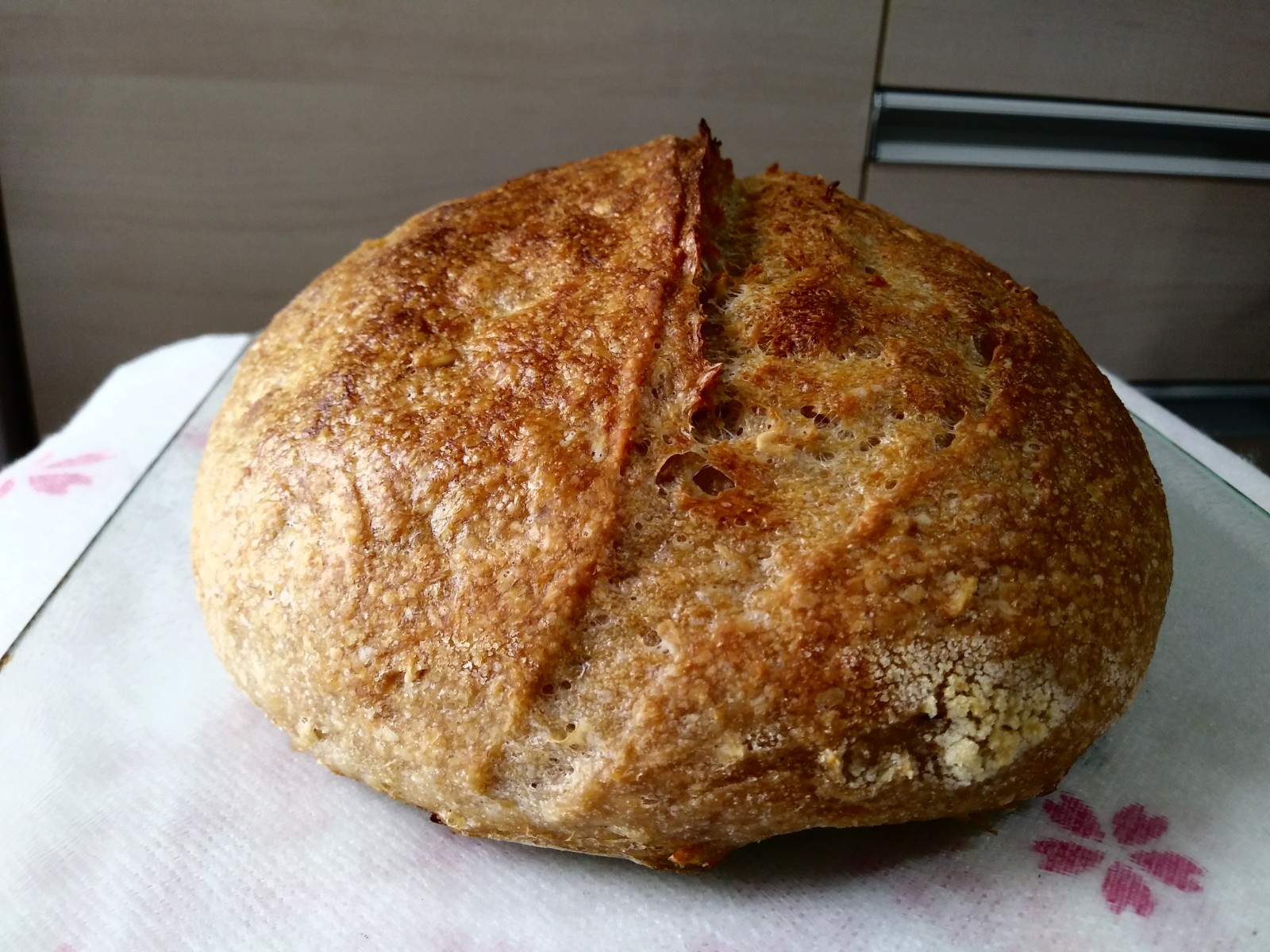 The dough was a bit sticky but quite stiff, probably because I lowered the hydration and used extra thick rolled oats. It was way less extensible than my usual 30% whole grain dough so I reduced the set of folds constructed. 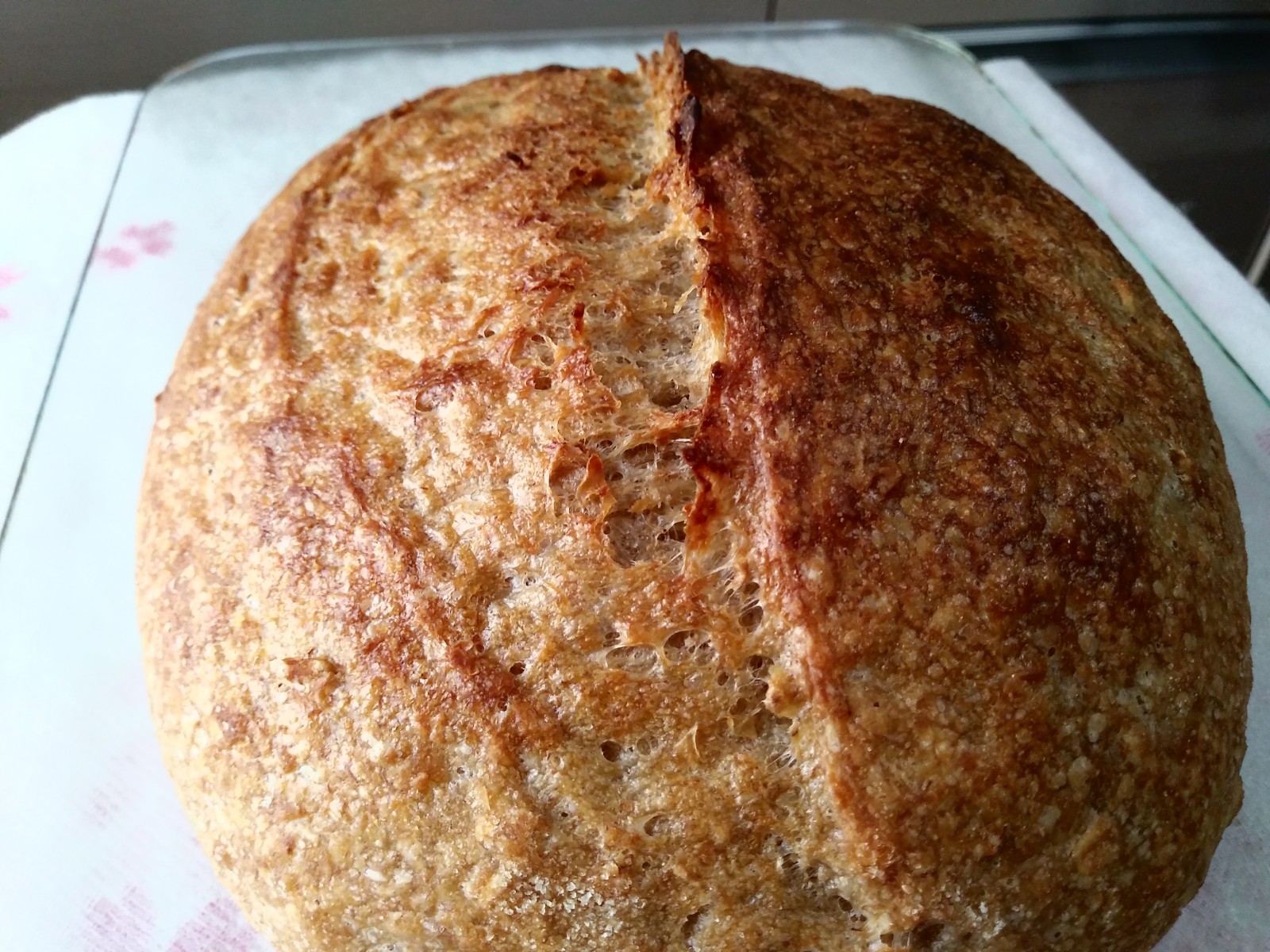 The texture is typical of porridge bread: very moist and springy. The bread tastes rather flat compared with my regular bread. It’s slightly sweet but has almost no acidity. Of course it wouldn’t be fair if I’m comparing it with my sprouted and freshly milled 100% whole grain bread. However, its taste is still milder than my other 30% whole grain loaf. I guess the oats, which are pretty bland, muted the overall flavor…. Hmm…perhaps I should have toasted the oats…? 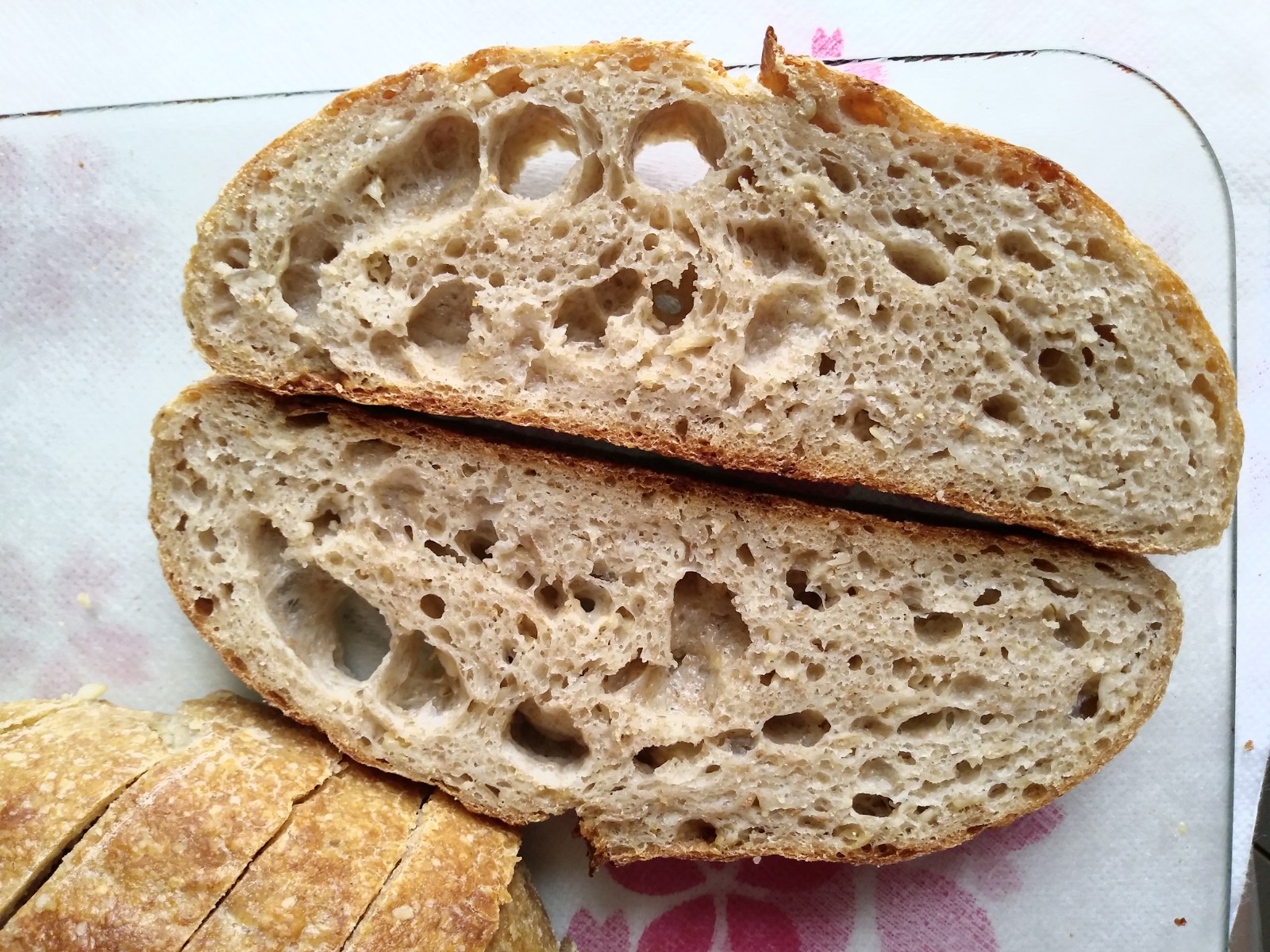 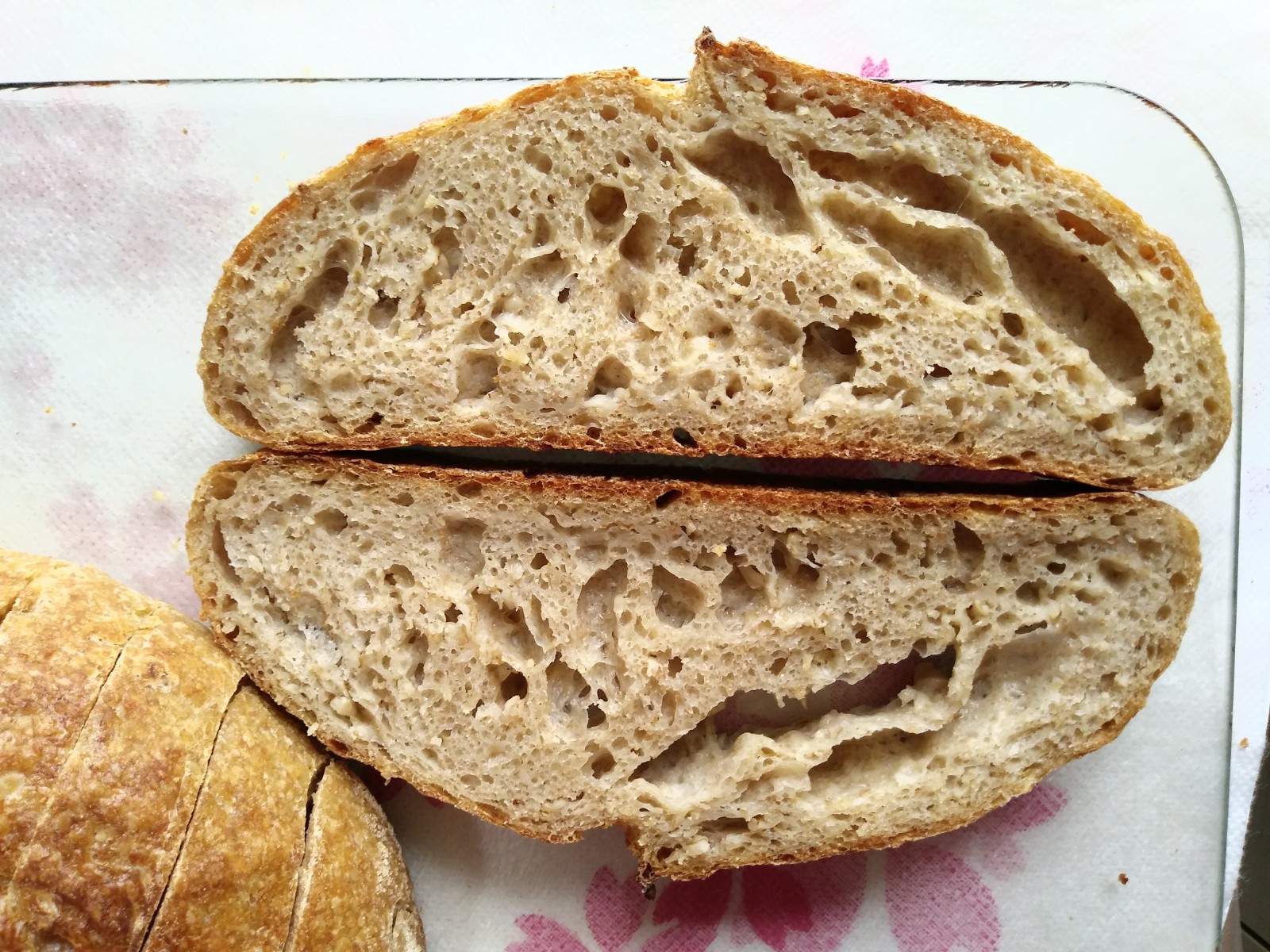 I very much like your submission, from the ear on the crust to the Lacey interior. For my first bake I used Quaker old fashion oat. My second bake I used Quaker steal cut. Today I went on a quest to find Bob's regular rolled. I came to the conclusion that Bob's regular rolled oats are the extra thick ones.  I do not think Bob's makes oats called regular rolled. In any event I am using the extra thick oats today also. Smile. I will use the little bit of old fashion I have left for the tops. Again, great job!

when he said "regular". Here's a quote from his blog,  "I only had Bob’s Red Mill Thick Rolled Oats on hand (this is what I typically eat for breakfast) instead of traditional rolled oats which are much thinner, and I upped the levain amount by 25g (to a total of 175g)." He didn't specify old fashion but I'm pretty positive that old fashion rolled oats are thinner than Bob's extra thick ones I've used here. I found the consistency of the porridge more like a soaker than what I'd call "porridge".

Thanks for the kind words, Pie King! I'm not entirely happy with this bake as the dough was quite under-proofed and the flavor was lacking. The texture is quite nice though: it's chewier and moister than my usual 30% whole grain bread. Next time I'll make a fermented porridge by adding some leaven to the cooked porridge to amp up the flavor.

Elsie, you mentioned lowering the hydration. I think that is a good idea. Since we cook the porridge and undertermined amount of water is lost due to evaporation. I calculated 81 grams of water lost for 250g oats and 500g water. Depending on how they were cooked that loss could vary considerably. At 1000g flour every 10g of water equals 1% hydration. In my case 81g loss equals 8%. That is a big difference.

Thanks for participating in the CB. It is interesting to read how you tweak your bakes...

should be minimum in my case. Since the oats weren't actually cooked, rather they were soaked in boiling water. The extra thick rolled oats absorbed most of the water almost immediately once they hit the water. I might have lost 5 g of water or so but that was less than 2% dough hydration. The reason why I lowered the hydration is that whole spelt takes 83% water versus 100% of whole wheat in my experience.

Thanks for reading, Dan. I hope that I haven't done too much damage to Maurizio's formula... :)

Elsie, I am interested to read how you tweak a formula and also to learn why. I learn so much as I read how different bakers approach any given bread. IMO, the CB is a perfect vehicle for learning such things.

I also have added the porridge many times cold out of the refrigerator.  I use a mixer so it's easy to add it into the main dough.

You certainly can up the water next time.  My porridge breads tend to be very hydrated.  I always add a mixture of stuff in the porridge to add more flavor as well.

as almost everyone warned about the wetness of the dough. Also, there have been quite a few over-hydrated porridge loaves coming out of my oven... Despite the stiffness of the dough, I didn't have problem mixing the porridge in this time. The folding/rolling method helped for sure.

I'm considering making a porridge loaf again this weekend but with finger millet (ragi) instead. To up the flavour, I'd ferment the the porridge and toast the raw millet beforehand. My whole grain bread doesn't really benefit from a porridge because it's pretty moist already. Adding a porridge tends to densen the crumb too much. However, white bread is a different story. I love the chew porridge gives white bread! It makes the bread less airy, which is something I've wanted to achieve for long. I see a lot more porridge loaves in my future :)

Thanks for the praise, Ian!

Ian, I hadn’t thought of add-ins for the porridge. Good idea! What are some of your favorites?

How do you prepare the oats before mixing into the bread?

I like to add barley flakes, cracked rye, cracked wheat and sometimes polenta.  I have posted a lot of porridge breads on this site and my blog at www.mookielovesbread.wordpress.com.

Thanks for the link to your site. I had not seen it before. The layout is super nice and your write ups informative.

Your innovation with breads is inspiring. I admire those that think outside the box. My horizon is enlarged...

Question - I went to your site and searched “porridge” using your “search” box. As far as I can tell the query only produced a single bread, Rye Beer Sour Cream Porridge. How can I find all of your porridge breads using your search engine? BTW, I was able to get 3 additional porridge breads when this was entered into the URL field. “site: https://mookielovesbread.wordpress.com porridge”

Update - WOW, your are a busy baker... I found want I wanted when I used this. “site:www.thefreshloaf.com isand66’s +porridge”

Glad you liked my site.  Will have to look into why only 1 bread showed up in your search but glad you found more to try on TFL site.  I usually post on both places so you should be good to go.  If yiu have any questions feel free to message me.