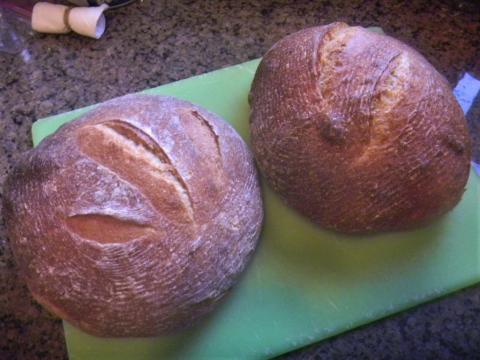 After last weeks bake my wife said she wanted a bread like that one but in the shape of a loaf, but not in a Pullman pan, so the crumb would be a bit more open.  Well. Lucy said we would bale it in the Pullman pan without the lid. 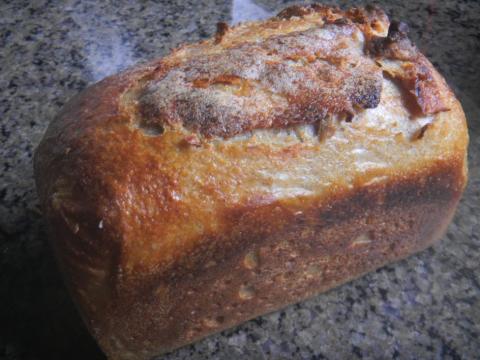 Them my daughter said she wanted two loaves to take to people at work.  Originally when needed 3 half loaves and we would keep one half of one at home but as soon as the word got out at work that Lucy’s sprouted SD bread was coming to work she needed pieces for 8 people so each would get a quarter of a loaf instead. 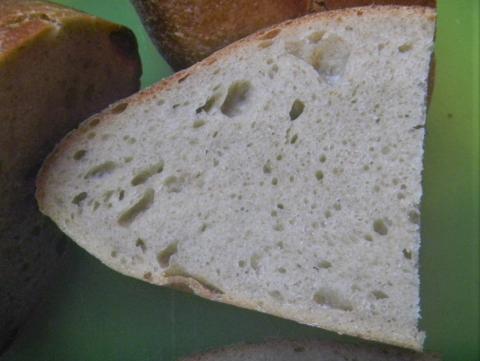 The wife’s bread was coming along nicely and we were waiting for it to sit for 20 minutes before shaping and then a 10 hour retard after 3 sets of slap and folds and 3 sets of stretch and folds all on 30 minute intervals.  But Lucy being as old as she is, fell asleep leaving the dough on the counter under the stainless-steel mixing bowl all night. 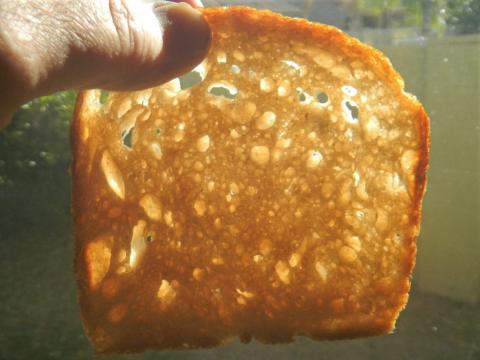 My wife likes it thin and this bread slices thin.

When I wok up at 5 AM she was looking at me sheepishly so out to the kitchen I went and the dough had expanded so much it filled the entire bowl and lifted it off the counter by and inch with dough oozing out all around like it was planned. 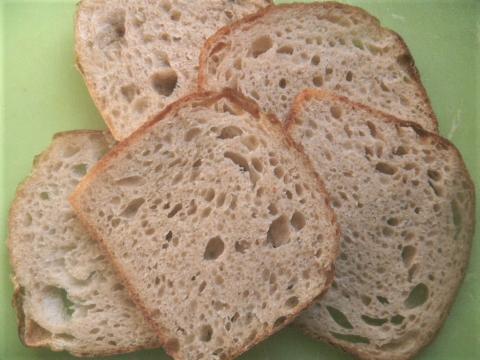 The part sticking out was very hard, so I cut it off with a knife and quickly shaped the rest of the dough and plopped it into the bottom of the Pullman pan and put it into a plastic grocery bag for another proof.  It sad there for 3 hours and only rose 25% - Oh my – so much for a more open crumb.  It was still 2 inches from the rim of the tall Pullman pan. 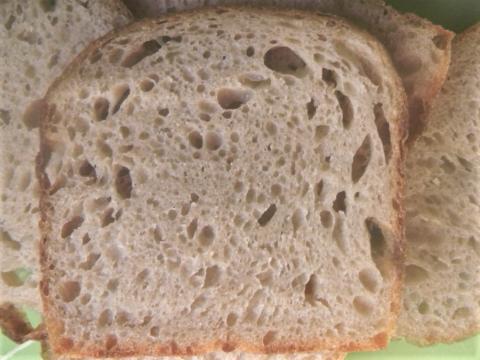 I slid the lid on thinking it was too pooped to pop but when the lid came off, 18 minutes later at 450 F, the top of the bread had stuck to the lid!  I finally got the lid to slid off and the top of the bread came with it.  So, I peeled the stuck part off and stuck it back on the bred and let it continue baking at 425 F convection until it read 207 F. 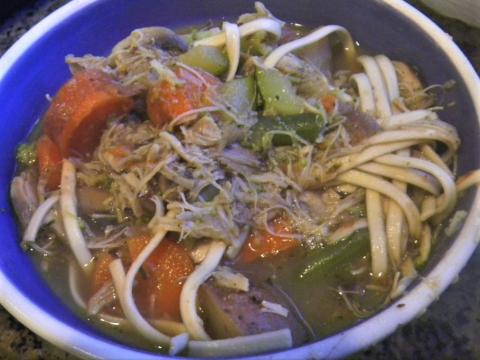 What is not to like about home made chicken noodle veggie soup with Chinese noodles?

Yeah, the top of the bread looked a but wonky but the crumb was open and the flavor of this bread was terrific.   It is the best tasting SFSD style recipe when it comes for sour for sure.  This one was 15 whole rye, red and white wheat and 10% sprouted spelt and sprouted Khorasan pretty much like the last loaf that tasted great but this one tasted superb.  Something abut a really long way over fermented dough that turned out not to be over fermented all that much. 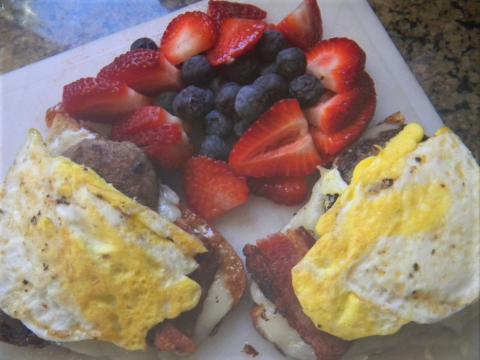 The boule and squat oval for my daughter was the same recipe, 10% pre-fermented whole grain , 100@ levain and 78% hydration total but it was not not over fermented on the counter and it was only 2 hours total for proof but it was under proofed.  I should have let it go longer but it had proofed 85%.  The crumb was not as open but it sure smelled good even though I didn’t get a taste. 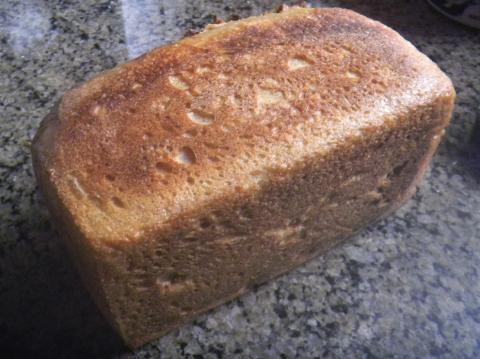 One thong is for sure, I am going to let it bulk ferment longer on the counter from now on, ala Forkish, until it really doubles in volume or even more and hope it isn't too pooped to pop in the heat of the oven,

Yippee’s Latvian Black bread is really killer too!  Two great tasting breads this week,  one white and one black,  makes it a special break week for sure. 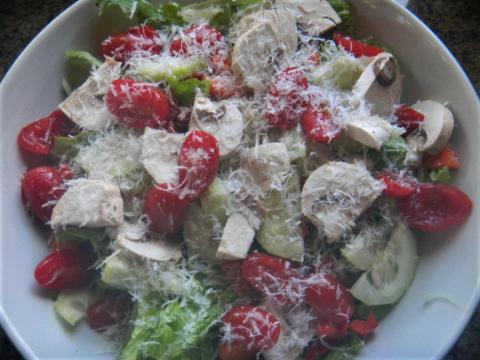 and that loaf certainly did! I have to try a Pullman loaf one day...and always makes me wonder why they are called 'pullman'...?

That shot with the sun reminds me of The Bread Builders book which I am currently reading whilst I am also looking at 2 other bread books at the same time going back and forwards to different books including a bit Open Crumb Mastery with a bit of crumb analysis...

There's currently a Wikipedia article called "Pullman loaf" - read it for more information, but the essential item for this thread is that while this type of bread pan was not invented by anyone associated with the Pullman railway cars, they were used on those railway cars - essentially because lidded pans can fit more slices of bread in the oven at one time, and the oven on a train car isn't very large.

Pullman loaves and this is how she wants it from now on.  If she would have seen it oozing out all over the counter she would have told me to throw it away because she wold never eat that mess:-)  Now I have to get a bigger bowl to hold the overnight bulk on the counter - well Lucy has two that will work if I can find them in her pantry.

Enjoy the bread books!  Glad you liked the post Kat.

The thing with being the father of this pair of twin breads is that you shouldn't show a preference for either of them :) Since it's more important to please your wife than your daughter's colleagues, I guess it's actually better that the tinned loaf might have turned out nicer? It's smart of Lucy for using sweet grains like sprouted kamut and spelt to balance the sourness of SFSD style bread. Nice bake!

A sweet and savory sandwich is always well-loved here. And if we can get fresh berries at a cheaper price, we'd be eating them everyday!

every bread from now on.  We know a hot one is a total loser at 82 F or over but it seemed to work at 70 F.  One thing for sure it=s that this is one great tasting white bread.  If she is happy I'm happy but I could eat this bread everyday too!

We get good berries year round but they are just a bit more expensive in the winter coming in from South America and Mexico.  Melons too.  Phoenix is one of the most affordable places to live for a big city but food is really inexpensive.  Chicken thighs have been 57 cents a pound or less for years so we eat them a lot and pork butt, ribs are a dollar a pound so we stock up when it is on sale.  Beef is pricey at 3 times pork so we really stock up when it is on sale but we don't eat much beef since it so bad for you health wise - or so they say at any rate.  4 adults can eat really well on $20 a day if they know how to cook. You would have no problem at all for sure  When you make your own bread it is only a buck a loaf too:-).

Glad you liked the bread.  Happy baking Elsie.  I have to go look for you latest posts now.  it has been a bit strange around here lately and I havenl' had the chance to get on TFL very often.

Good recovery and great crumb.  I can imagine out tasty it must have been.

Give Princess Lucy a nice belly rub from me, Max and Lexi.

My daughter and her husband just got a new dog - an AussieDoodle.  Cute little thing with a ban name -Mabel or is it Maybel or Mabelle?  Really supposed to be smart so the opposite of Lucy for sure.  They wanted a long haired dapple doxie but the wait was too long.  He runs 8 miles in the morning so this active dog will get plenty of workout time to wear itself out.  They will be walking everywhere too since they live downtown in Seattle.

Cant wait to see some pics of her new niece 🐶

I love these types of doggies!  They are so pretty and have such great dispositions.