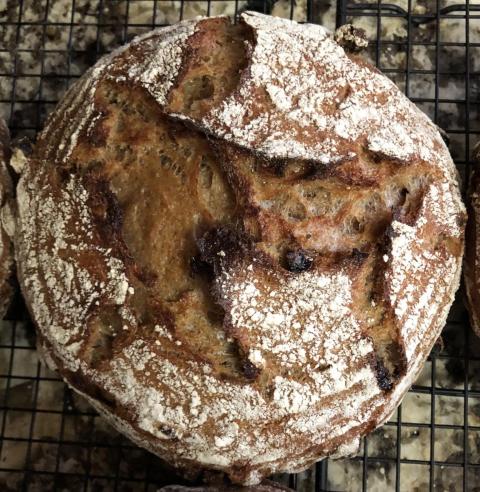 Everyone loves cinnamon raisin bread but I was leery of making some because of the negative effects of cinnamon on yeast. This is a shot at it adapting the recipe from Bourke’s Bakery Spiced Fruit  loaf.

Extra bran and AP flour to feed the levain. 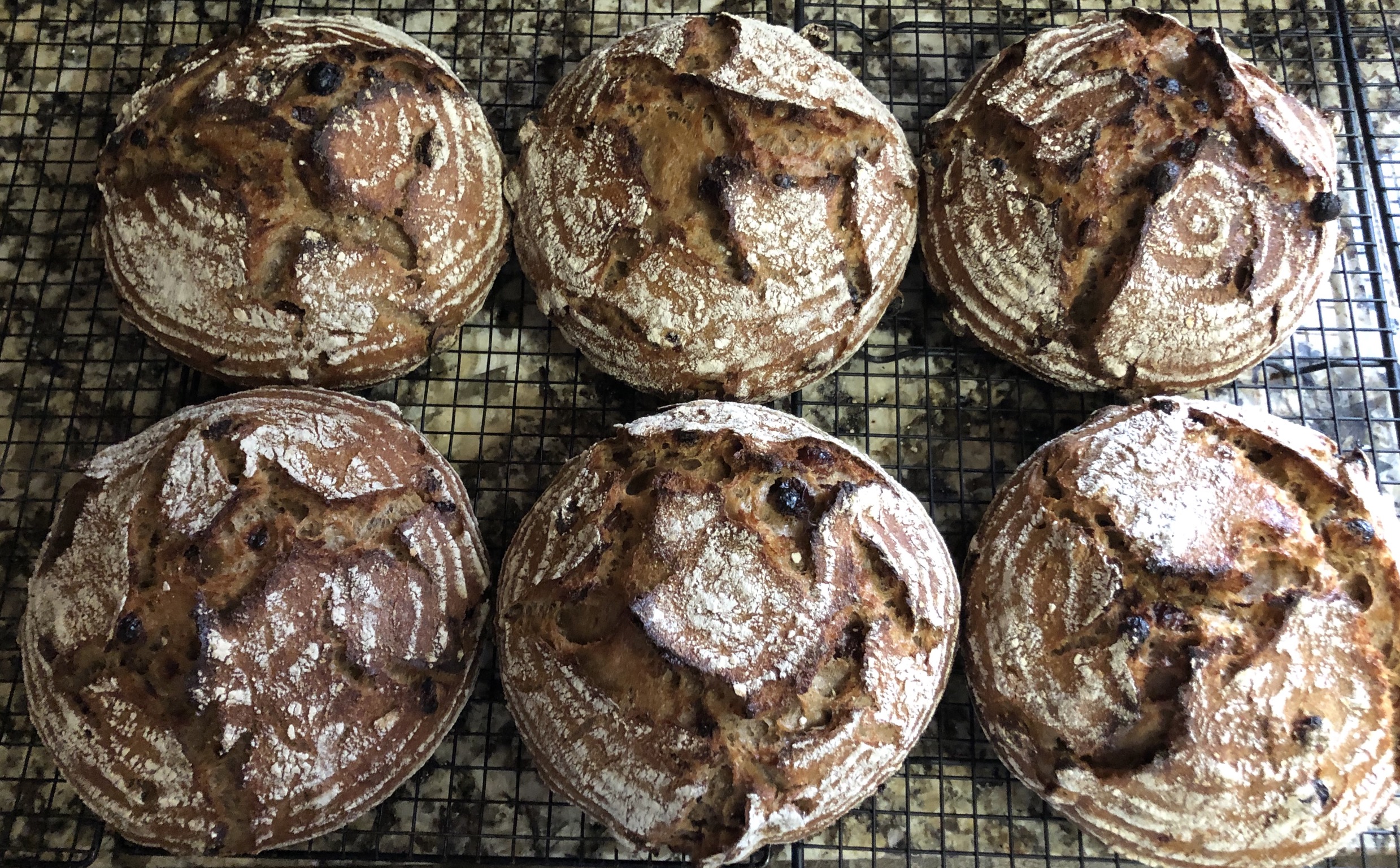 This first batch was done with the shaping method described above. I have a second batch about to go into the oven where I shaped doing the “cinching” method to see if there are any differences in the result.

Wow, these look amazing. I think I will try these for my next bake, I am obsessed with everything cinnamon raisin. Are they very sweet? I don't usually bake with honey.

They are still cooling on the counter. The second batch is in the oven still.

Really not a lot of difference. 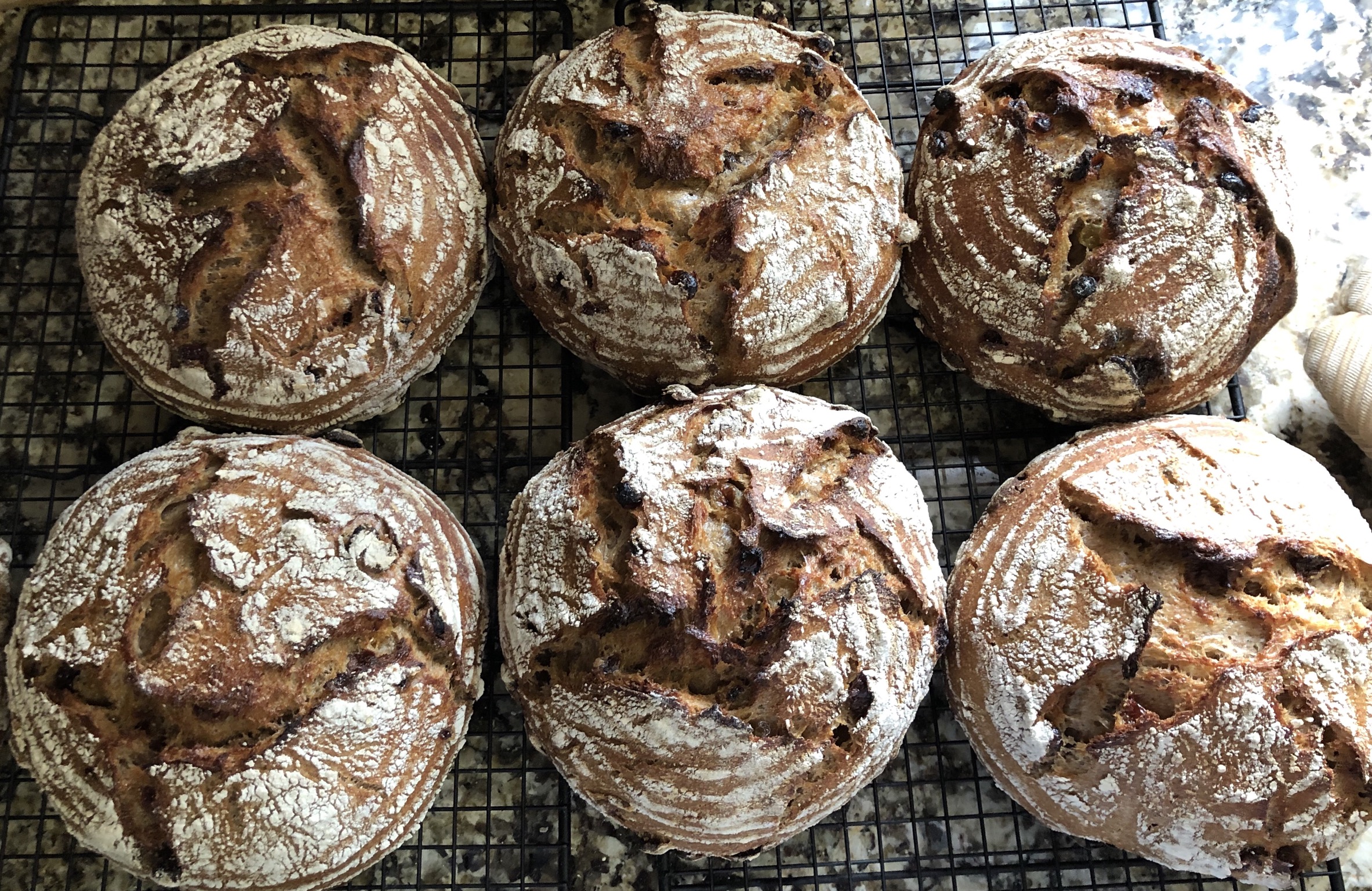 I remember your experience with the slow levain action due to cinnamon. I wonder if YW would speed it up some for you...not that you need to change anything as those loaves are perfect !  I love all things with fruit and spice.

Why didn’t I remember to use some! I make a note for next time! Thanks for the idea!

So, it was a cinch making the second batch Danni?  I am in awe of your enterprise and energy, that is a lot of baking you've done this weekend and a whole lot of really delicious looking bread!

Making 12 loaves each weekend isn’t too bad since I got my routine mostly down. I just know that Saturday is an at home day. I usually just stay in my pajamas and make dough.... the bread kind! 😁

your boules never cease to amaze me Danni...that oven spring with all those ingredients....l can only imagine the smell in your kitchen. Love to see whether you can see a difference with the cinching or not... Kat

in oven spring but I liked that it was a bit easier than what I have been doing. I did feel that the boules seemed tighter initially. I just might switch over to this!

The oven spring in these wasn’t huge but good enough considering the amount of fruit in there.

You amaze me, week in and week out. And every loaf as perfectly shaped as its neighbor. You must have calibrated hands!

Forgive me if I missed a step, but where is the cinnamon in the procedure? I see it listed in the ingredients, but not in the method. It's one spice I've been too afraid to use. Looks like it didn't affect your loaves in the least!

Thanks for your eagle eyes! The cinnamon went in with the salt. I’ll fix my post!

Looking at the small bubbles beside the bigger ones, I think I could have bulk fermented at bit longer. Maybe it needed more time on the counter and none in the fridge. What do the gurus think? 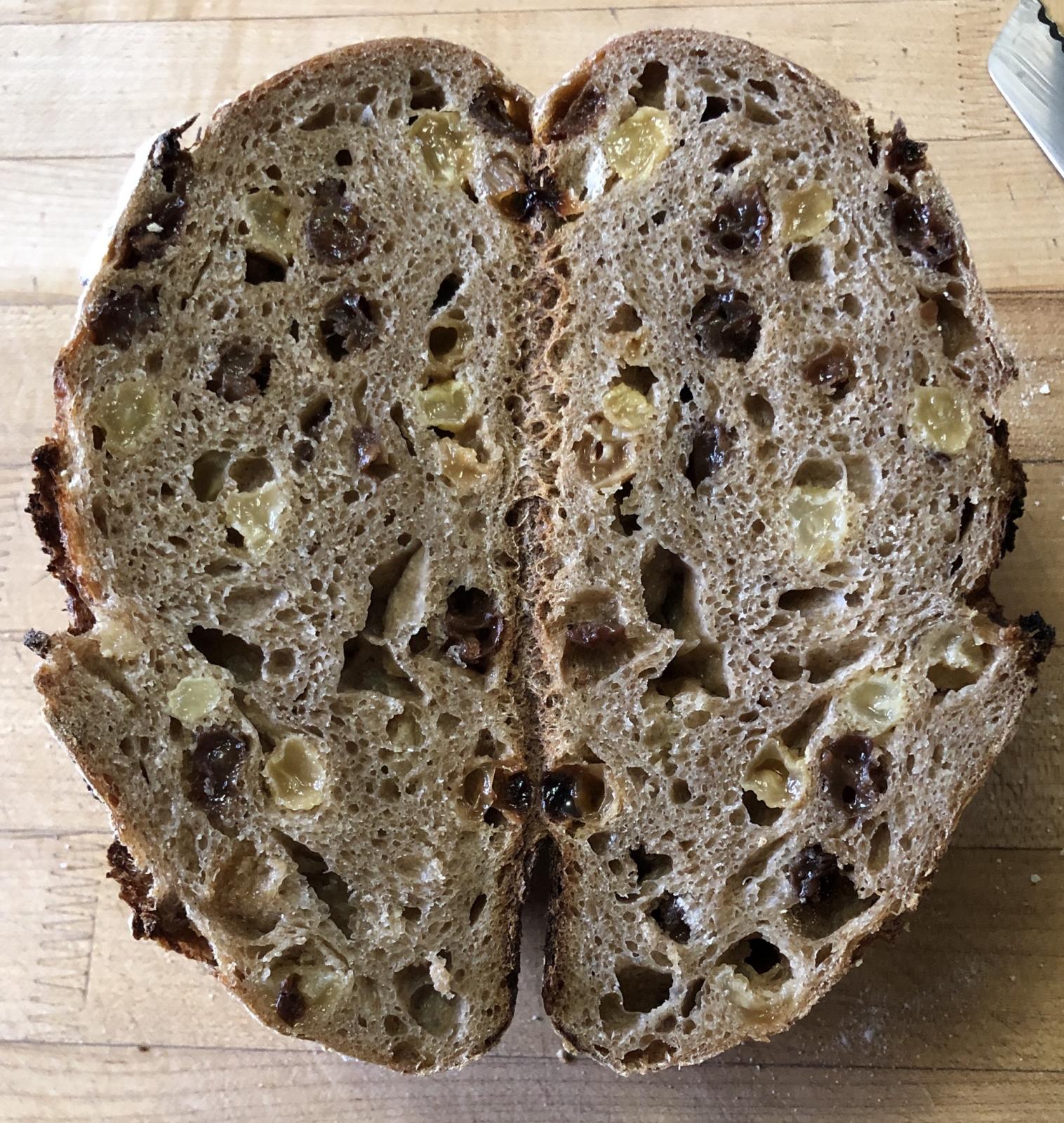 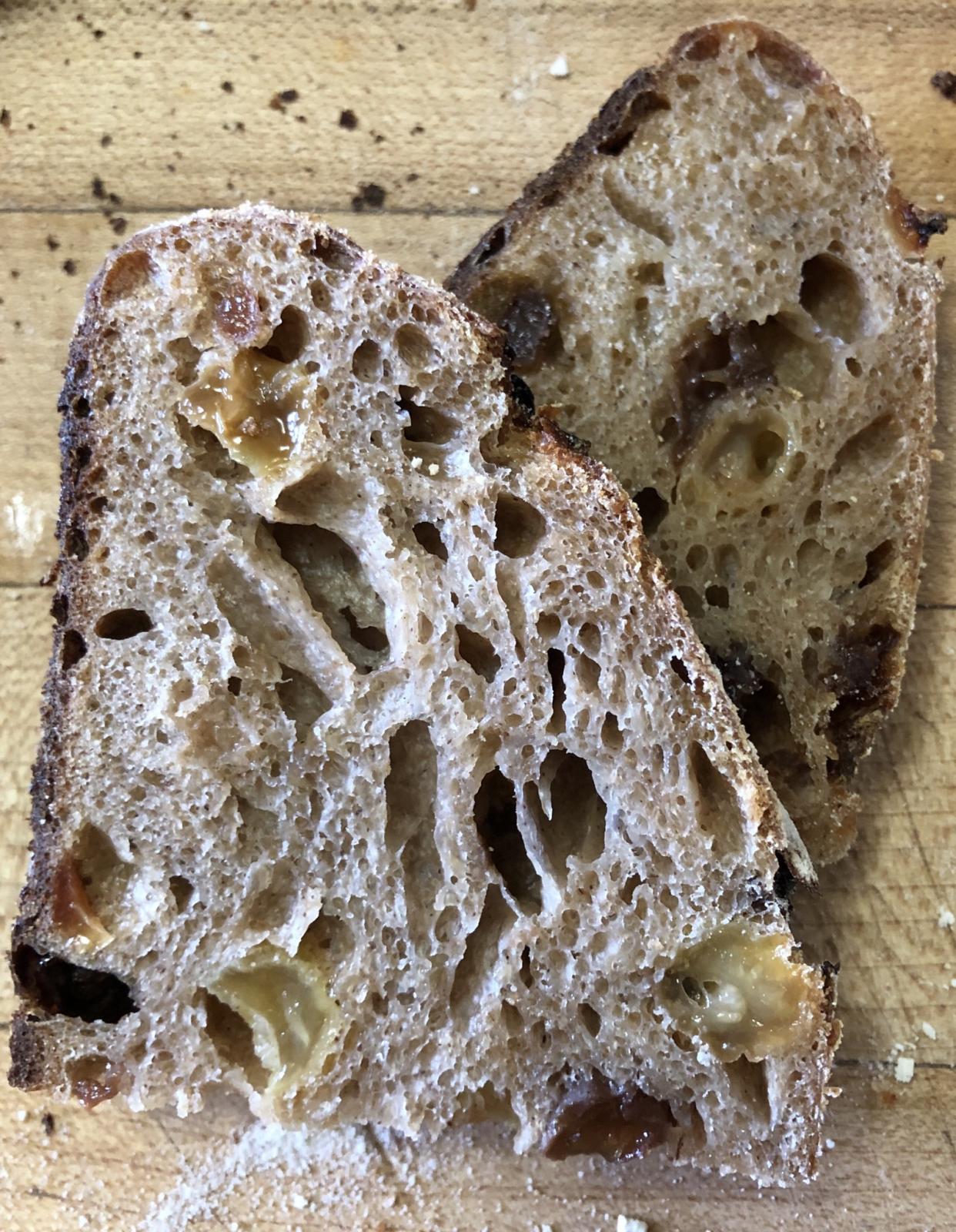 You got me thinking: I seem to get this kind of crumb whenever the bread has an abundance of add-ins...No sure if that's related.

do you mix in first speed without the ingredients and get the gluten really well developed? As I handmix I don't really know mechanical mixing at all but I try to get the gluten development ahead of adding bits and in case of my walnut bread and porridge breads this has worked well...It is a lovely, lacy crumb anyway and looks sooo good! Kat

so I try to carry it over to the machine. The first speed after the autolyse is to try to get the salt, yogurt and levain somewhat mixed in before I switch to the second speed for gluten development. I am basing the 5 minutes on the second speed on what I have read here since I have been using a mixer only since Xmas. I have read that you want only a medium stage of development to get a lacier crumb. Full gluten development will give you a tight uniform crumb. Then it is near the end or after that that I added my fruit. I wanted the fruit to stay intact and not get pulverized.

Mind you, with seeds (Hamelman’s 5hrain), I added them with the levain, and with soaked oats (Honeyed Spelt Oat), I added those with the autolyse and got a nice crumb both ways. I am doing a seeded bread next weekend. I should try adding the seeds at the autolyse stage... would solve my problem of trying to juggle enough water for the autolyse and enough for the soaker and not end up with a too wet dough or sometimes too dry. Something to think about.

and at the moment reading a lot especially about preferments  and I feel a bit like my brain is in the state of one of those shakers where I wait a bit for the snow to settle...

It would be interesting to understand why some formulas suggest to only mix to 'medium gluten development' and others to full? I seem to remember that in a post from Trevor on IG or  in his book he talks about to get close to full gluten development during mix and then to develop structure during bulk...sorry, I do not want to cause any confusion and shall explore more....

development by hand is similar to medium development by machine? It is certainly easier to develop gluten in a machine than by hand. Even so, you really need the folds to get that strength in the dough. My dough is very loose when I remove from the machine, almost like muffin dough but it all comes together with the folds. Amazing really!

which I did find very useful from Trevor's post: https://www.instagram.com/p/Bt8hmuwn0HC/ I am always worried to misrepresent what people have said and glad to have found the original source... Kat