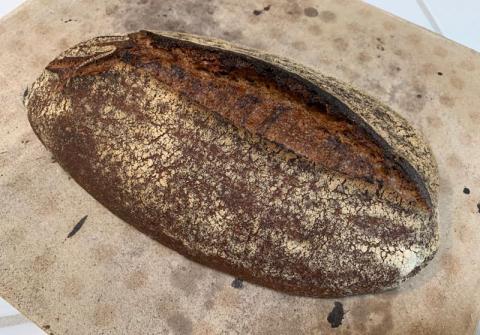 Browsing cookbooks at a branch library, I found Josey Baker's “Josey Baker Bread.” I have driven by and peeked into his bakery in San Francisco, but have never tasted his products. I confess I found what he charged for a slice of toast off-putting. But, folks seem to like his bread. Looking through the book, I found some recipes for 100% Whole Wheat sourdough bread. It certainly looked good in the photos, and I am still looking for my personal favorite 100% whole wheat sourdough. So, I checked out the book.

I won't comment on the book's style except to say it is an attempt to seduce some one into baking bread at home who is still a bit frightened and mystified by the whole process. It is certainly a worthy objective.

Anyway, here's my first bake of this bread.

Note: Baker does not call for a true autolyse. He combines all the ingredients in the “Final Dough” at once and, after a mix to just distribute them evenly in the dough, he lets it sit for a half hour before beginning a series of stretch and folds at half-hourly intervals. The procedure described below is what I actually did. I mixed the final dough, including the levain but not the salt, and let it rest for a period before adding the salt. This is the way I was taught at the San Francisco Baking Institute to autolyse dough when a liquid levain is used.

Note: The sourdough starter I used to seed the levain is 100% hydration. It is actually 70% AP, 20% WW and 10% whole rye. For purposes of the “Total Dough” formula, I treated it as if it were entirely whole wheat.

Note: Because of a social obligation, I was not able to mix the final dough right when the levain was ripe. I refrigerated the ripe levain overnight and continued the process the next morning.

Note: Baker says one can cold retard this bread, either in bulk (after Step 4.) or as formed loaves. (after Step 8.) He does not say whether or not he would ever do both retardations.

The flour I used was Turkey Red wheat, freshly milled in a Mockmill 100 set at its finest setting. I did not sift out or remill any of the bran. The dough was soft and tacky but very manageable. It seemed to be developing some strength curing the stretch and folds, but was quite loose during shaping. 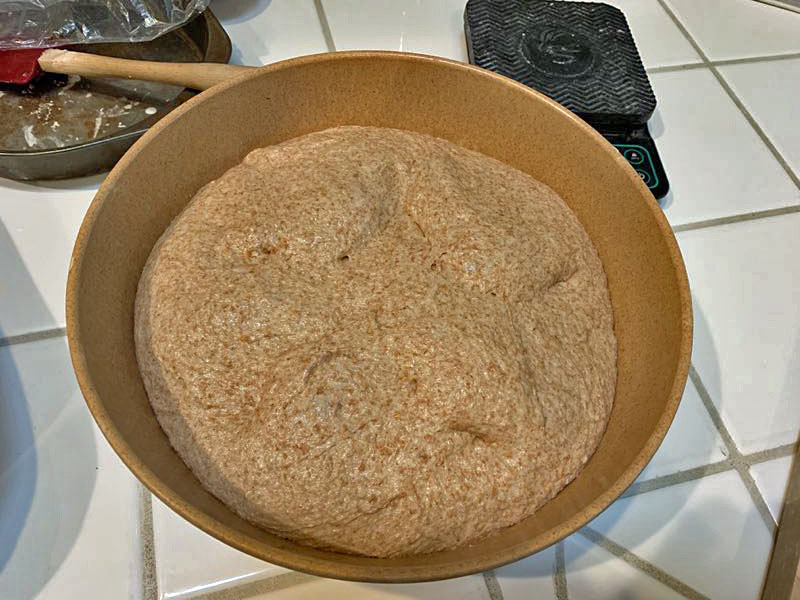 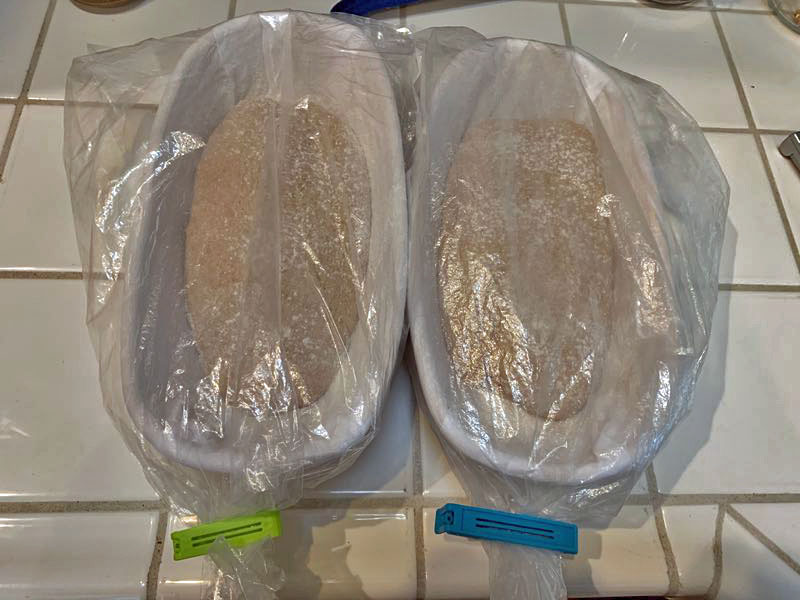 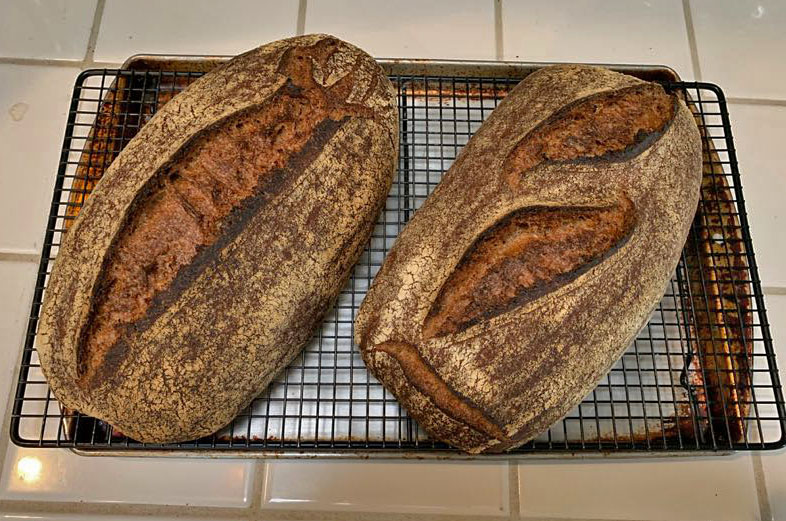 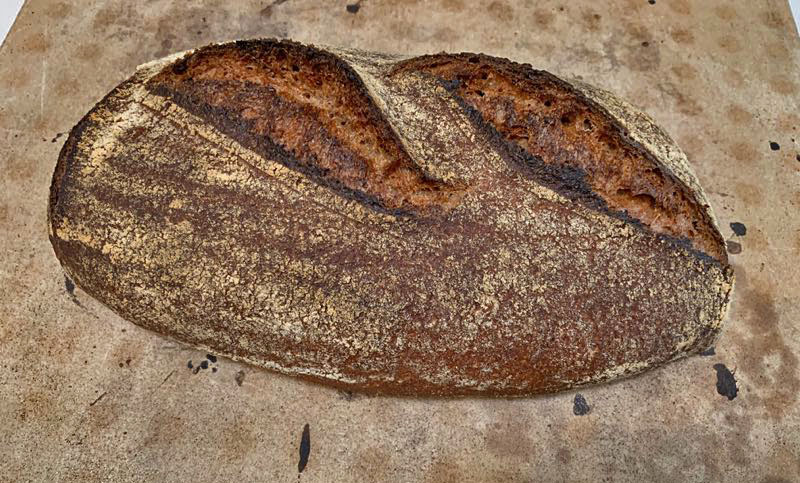 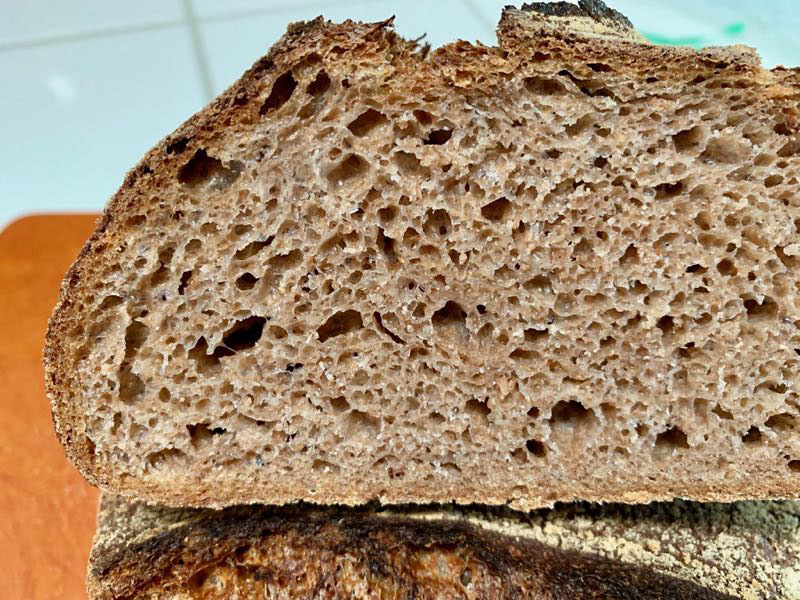 I sliced the bread after it had cooled for about 3 hours. The crust was chewy, except for the ears which were crunchy. The crumb was very moist and tender with a wheaty and mildly sour flavor. My experience has been that this type of bread improves after a day or so.

Your crumb is beautiful.

When I think back to my beginning years (before the Internet) of baking, all I can envision are images of “bricks”. I remember eating them and trying to convince myself how good they were. They were more suited for door stops than eating. I really believe that this site has propelled many new bakers past that dreaded stage. I appreciate Floyd!

Did you bring to room temp before baking after retard or bake from chilled?

90 minutes is about what I'm letting my fridged loaves rest for before baking in the morning.

PR and Josey Baker are Lucy's heroes!  We checked out his book at the library too - library browsing when retired is highly recommended.  It has a lot of great recipes in it for sure.  Your WW bread came out  great.  It is just the way it is supposed to be inside and out.  Well done and happy baking  David

After a few attempts it worked out, but tbh, the taste was a bit bitter for me.

Hester, if you are interested in a milder whole wheat, I suggest you give White Sonora a try. I find it much milder that Hard Red Wheat, which is my favorite. I guess I hard core :D.

I am planning to do a 100% whole wheat that is enriched. .... in preparation for a visit to someone who loves ww sandwich bread so I'm doing TxFarmer's loaf of Whole Wheat oatmeal sandwich bread.

That last bake of 100% ww, I think i let go too long in the proofing stages.

White Sonora is very mild and not bitter IMO.

I have found that good, slow, fermentation of sourdough whole wheat breads eliminates the bitterness. Now, sometimes I get a bit of what I call "grassiness" right after the loaf has cooled enough to slice, but that is almost always gone 24 hours later.

Maybe I will try this Josey Baker bread with fresh-ground white whole wheat, just to experience the difference.

Excellent bake, David.  Bold and a really great crumb.  I have purchased Josey Baker breads and they are superb.  I'd reach for yours without hesitation.

Very nice bake and write up, David. Would you mind if I featured this one on the homepage for a bit? I've been negligent in spotting and highlighting great posts recently.

What a magnificent loaf, David! I am madly envious, as an inexperienced baker who aspires to baking such a loaf with consistency and an absence of angst. IAt present I am still on the trail of eliminating potential barriers . When one bakes only weekly, it takes a long time to isolate faulty practices. Your expertise gives me hope.  Valerie

Reflective practice and systematic, concerted error correction. It will all fall in place.

The "problem" I have is I cannot remember what I used to do that yielded inferior results.

In bread making, "everything matters," so dramatic improvements come with a myriad of tiny corrections in procedures. It's hard to isolate each one.

I'm feeling a bit stupid here! Do you use the proportions shown in the 'Total Dough' or the 'Final Dough' to make the bread? I realize that the 'Final Dough' has the levain added, but I can't get anything to add up using the amount of levain added. Or the salt --11g vs 12 g. Really want to try this recipe.

Not a stupid question at all.

The salt discrepancy. It could be due to a rounding error. I also noticed that other ingredients (flour for example) also don’t add up, but is close enough.

Ask away, we’re here to help.

Thanks for catching my editing error.

I originally typed the Total Dough table using Baker's formula, but then I decided to lower the salt just a bit. I forgot to correct this discrepancy. It's fixed now.

For purposes of making the bread, the information you need is in the Levain and Final Dough tables. The Total Dough table, however, gives you the most accurate picture of the dough ingredients. The Levain components are included in the flour and water items, so you can see the actual totals - especially flour and water and, thus, hydration.

I hope that is clear.

And this one looks simple enough to be accessible :-) Eager to try this with my T150 flour; it certainly won't give the stellar results you got, but maybe something close…

These look lovely! Thank you for sharing.   I assume from the comments that this was home milled grain (but I could be wrong) If you did mill the wheat, what type/types did you use?

I too am on a quest to make a 100% freshly milled sourdough, and I want that very sour flavour, but I find that even with a retard in the fridge I often end up over-proofed.  (I need to pay more attention to my dough, I know - but life gets in the way!)

If you read the note that follows the procedures, you will discover that I used Turkey Red wheat for this bread. It was milled in a MockMill100.

As I was milling the grain for this chilly winter week's 60% ww loaf, I found myself recalling and newly marveling at your 100% ww triumph.  Wunderground says your temps are about like ours these days and I'm struggling with our annual seasonal challenge of trying to fool the dough -- always with frustratingly incomplete success, [it knows the truth] -- into thinking the kitchen and even the proofer is warmer than it actually is.  I have a new 100% ww scheme I want to try, but won't go there until our temps are decidedly more Spring-like.  Fighting gravity and a 55˚F kitchen is hard enough with 60% ww, much less 100%.  Your bake is all the more admirable, given the time of year.

I love my Brød&Taylor proofing box, especially in the Winter. But my kitchen never gets as cold as 55ºF! I generally doing bulk fermentation at 80ºF these days. It usually gives me a 3 hr. BF, with a 20% pre-fermented flour inoculation and 40 whole grain flours in the dough. I think it also enhances the acid balance, but I've not done a controlled experiment.

The overdue return of sun helped our kitchen into the 60's today and for this evening's BF, albeit in an 82˚F B&T.  Your other numbers are fairly well aligned with our typical weekly bake, though 60 pct ww (half/half hard red/hard white) and 15 pct pre-fermented flour.   And I always roll in some porridge for the missus :-).  A cold winter kitchen makes a handy overnight retarder!

Crumb and crust look spot on David.  Do did you notice a flavor difference or crumb difference in the retarded dough versus the same day baked dough?

I have not baked this bread except with overnight retardation.

It has an unique flavor - very aromatic. I couldn't figure why, so I baked another bread with which I am very familiar, a mixed grain sourdough that has about 20% fresh-milled whole wheat. (30% whole grain flour total.) The same unusual flavor appeared. I conclude it is due to the Turkey Red wheat. I need to find out if others have experienced this.

Not sure why I thought you baked it two ways.   Anyway, I have noticed that the Turkey Red Wheat did have a stronger flavor profile than other varieties I've used.  It was several years ago since I've tried it from Breadtopia.

Lots of work but it looks like it was worth it.

Pretty crumb and the color is just fantastic

So did you bake these loaves in a dutch oven or outside with steam?

These were baked on a pizza stone with steam for the first 15 minutes.

Thank you for sharing the beautiful results! I just received my own copy from Amazon and I can’t wait to dive in and get baking. Josey Baker Bakery mill their own flour and you can check them out on Instagram.