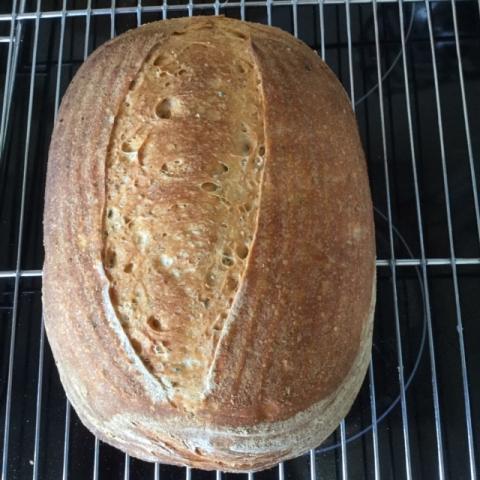 recipe by Emmanuel Hadjiandreou's book.  Inspired by Abe & Carole I had a go at this yesterday whilst making my 5 grain levain for the community bake.

Starter was refreshed the day before and in the evening I built the levain - 100% hydration with some bran included and left it overnight on the bench.

Bake day was crazy - visitors in and out and bread on the go.

Mixed together 237 g flour & 6 g salt.  then I added 4 g nigella seed and went to get the celery seeds.  Oops, it is mustard seed.  What to do?  ok I have oregano (only 1 g as plant is tiny) and there was rosemary in the garden.  So I added 1 g finely chopped oregano and 1 g finely chopped rosemary.  Mixed with flour until well distributed. This is just another small  575 g loaf.

Mixed together 24 g tomato paste (home made so not as strong as commercially made stuff), 6 g olive oil, 119 g water and 178 g levain.  To this I added the flour mix....  and mixed well.  Hadjiandreou mixes then rests 10 minutes, then does a series of folds at 10 minute intervals.  I decided to just do my usual 200 slap and folds to make sure I had enough gluten development.  I gave the dough 2 sets of stretch and folds 45 minutes apart.  At this point I decided I should follow instruction which had said bulk ferment 1 hour, shape and proof 3 - 6 hours.  So I patted dough out it was a little poofy, so I folded sides to centre and rolled it up, popped in the banneton to proof 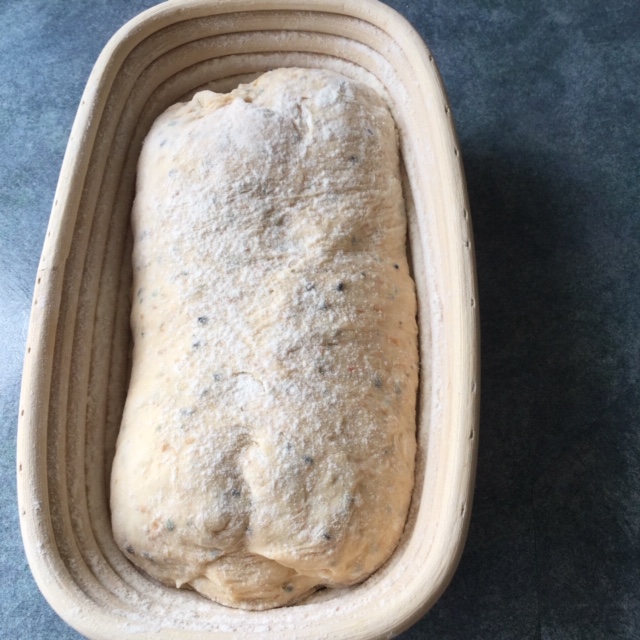 An hour and a half later it was like this 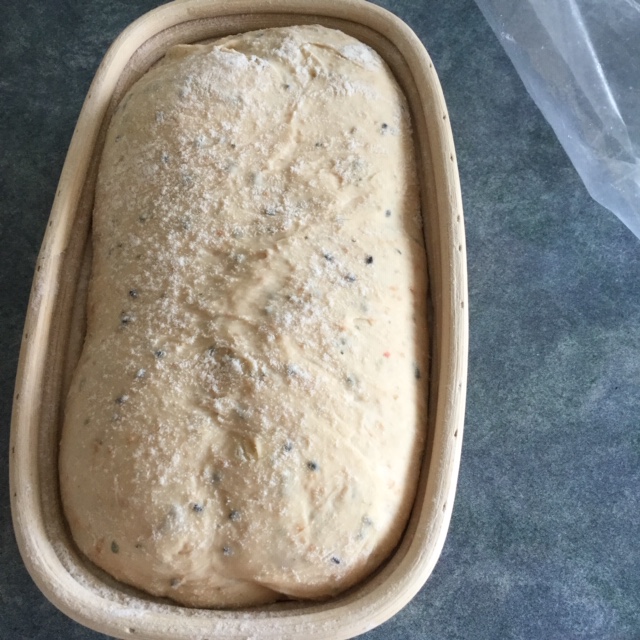 so I popped it in the fridge.  I wanted to bake it when I baked the 5 grain levain later in the day.  It was also fermenting much quicker than I expected.

An hour and a half later I turned the oven on, put the DOs in and left to preheat for an hour.  Here it is before I scored - a nice dough, hasn't spread much.  Not sure if it would have been better baked a little earlier though. 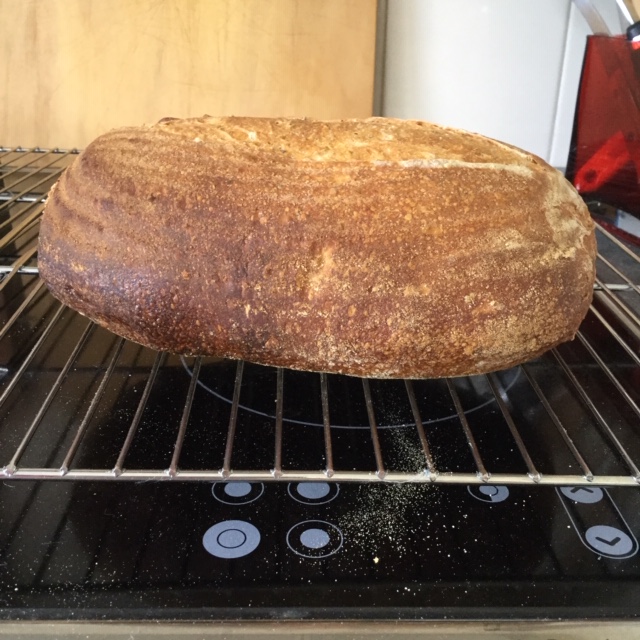 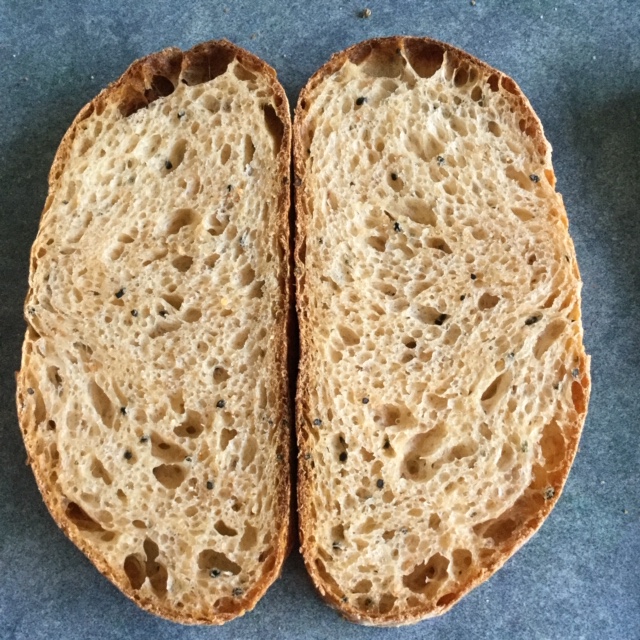 the colour is pretty true too.  An interesting flavour, had for lunch today with cold cuts and brie.  Not sure if it is the oregano or the rosemary coming through.

A good bake though, I will see how I feel about the flavour as I eat it and make adjustments then.  The celery seed would give a different flavour I think.

I was just wondering if you had time to try this loaf. It looks lovely. Your crumb is beautiful!

I agree that taste pairings require a little more thought than usual. I had it yesterday as an avocado melt: spread guacamole, grated over lots of cheese, then under the broiler. As a breakfast bread, I'm not so sure :-)

You got a gorgeous 5-grain loaf, too!

today.  I just can’t quite put my finger on the flavour but it is definitely a bread for savoury toppings.  there is that kinda herbaciousness that comes through.  definitely an interesting bread.

I found a ripe avocado on one of the trees over the weekend so it will be interesting to see how it goes together.

Bake happy and stay warm and dry! we are sweltering!

to accompany something like a corn chowder. But if you're sweltering (lucky you) hot soup would not be on your radar!

that too many tomatoes will make the sauce go sour.  But, for those of us that try to make sour bread, this one would have be right up there!  Yours came out very nice indeed.  Happy baking Leslie

flavour is quite subtle but it is an interesting bread.  something a bit different. I was happy with the crumb too.

I've always liked tomatoes in bread but they're often paired with herbs or olives only. The addition of nigella seeds make it slightly special to me. I've all kinds of whole spices in my cupboard: cumin, fennel, coriander, star anise, cinnamon, fenugreek seeds, clove, cardamon etc., to name a few. Yet there're no nigella seeds... Maybe I should get a bag of them soon?

The score on your bread showed up pretty nicely so nevermind the ear :) Nice, soft and fairly open crumb. Nice job, Leslie!

I have no got the celery seed and will try this again in the near future.  the flavour has grown on me!

your red bread was a very interesting one too, you always have great ideas and combinations.