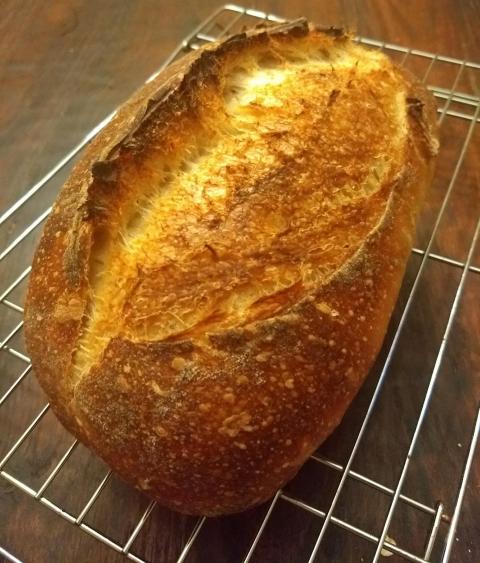 All water from fridge 66F

12:50am-premix out on counter and levain built

9:40am-added 55g starter, not 50g. Probably accounts for dough progressing (I think) 30-45 mi minutes faster than recipe (but I kept to the listed schedule).  Haveing trouble with the ''rolling" so just did the 3 bowl spinning.

3:15-Do a late S&F, which was a mistake so close to end of bulk.  Stuck/deflated a bit. I think it is proofed, but decide to let it go the next hour due to the prior deflation, because previous loaves have been a bit under proofed, and wanting to stick to the plan.

4:15-Ugh, did I mess this up. Stuck and deflated some.  Didn't put flour down and dough stuck.  Bench knife worked but hard for me to shape like that . Attempted to preshape as a boule but pancaked and stuck

4:45-Once I tore it onto a bit of flour, shaped following KAF shaping video . Think it was okay but not great .

What a beautiful loaf.  Please add a crumb shot!

That’s a pretty good looking score and ear you have there.  Scoring loaves is one technique I’m hit or miss on. Great job.