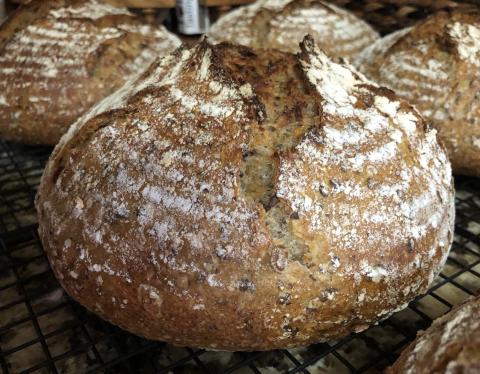 I have been away from bread making for a month due to other obligations and this was the recipe that called out to my baker’s soul. 🙄

The last time I did this recipe, I used cracked rye and oat groats so I changed it to bulgur and old fashioned oats. I also changed the Wholewheat flour from Red Fife to Selkirk wheat. The bran was sifted out and used in feeding my starter to get it up to speed before making the final levain.

The procedure was also changed a bit as my curiosity was piqued when reading about putting the dough in the fridge at the end of the bulk fermentation. A few of you seem to be getting some amazing results. I do remember getting some really open crumbs when I have occasionally retarded the bulk in the middle of things due to an interruption of some sort, but I have never done this intentionally. And never for several hours!

All of the Soaker

A couple of days or the morning before

The night before making the dough 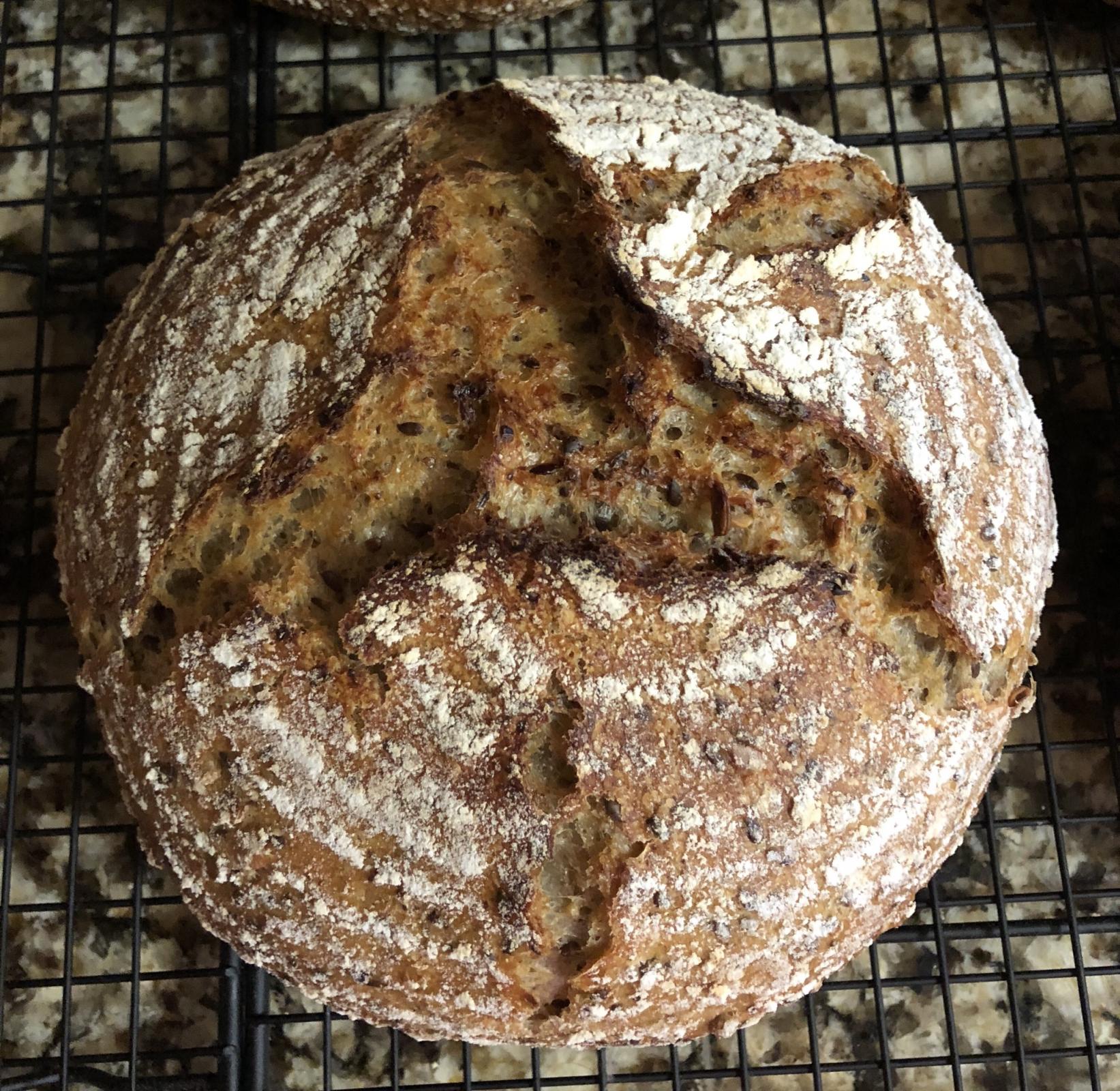 The loaves had pretty good but not fantastic oven spring. That being said, I got great ears even though I didn’t score the dough.  Crumb shots to come later when they cool. That’s the first batch to come out of the oven. I have a second batch of six and a batard to go in as soon as the oven is back up to temp. 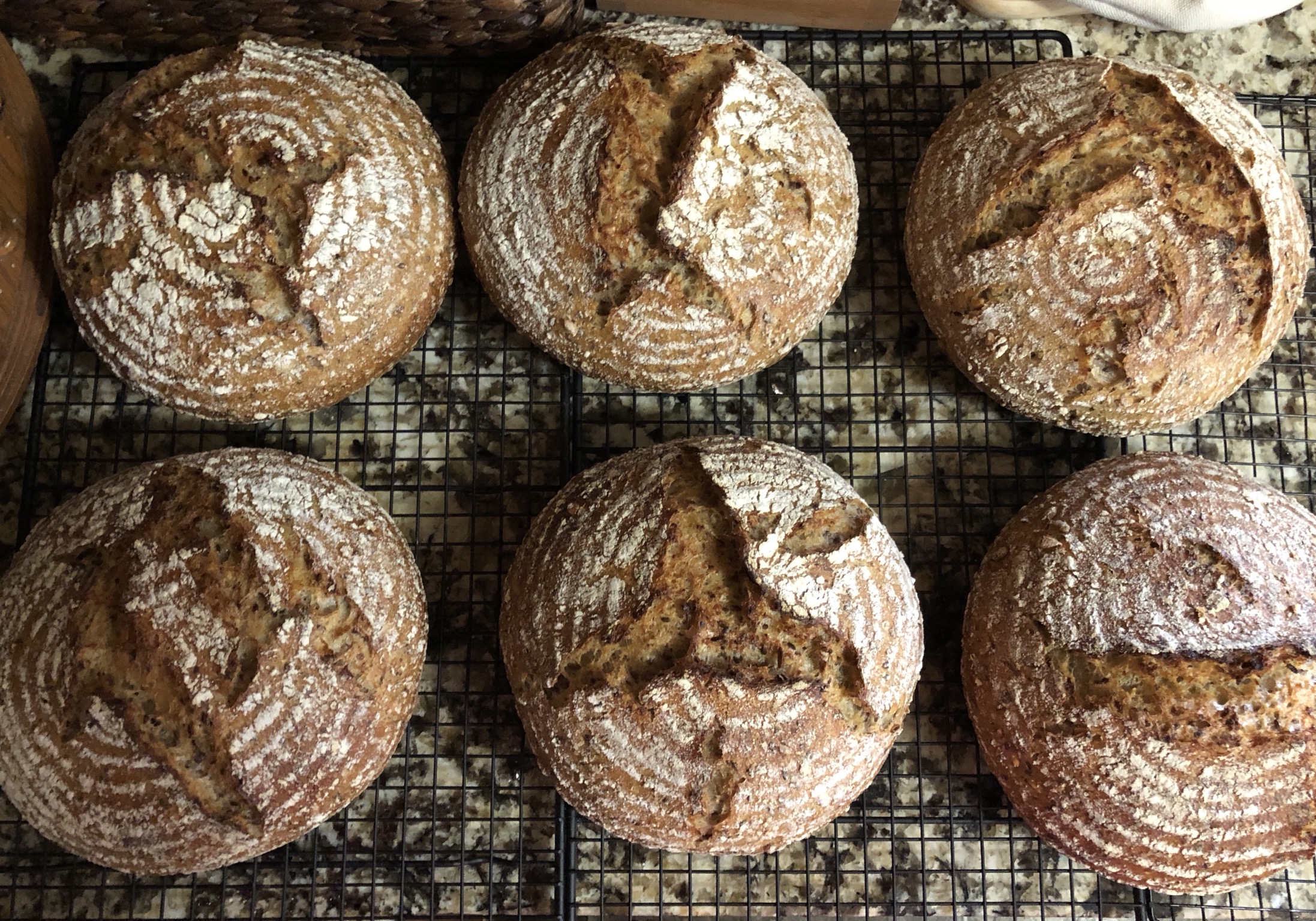 I miss your posts badly! It felt wrong without your weekly post on TFL.

The bread looks good on the outside so you haven't lost a beat. Can't wait to see the crumb!

and your oven spring still has me all in flatters...how do you do it? Looks sooooo good and can't wait to see the crumb... Kat

and as I can do a window pane on my 50/50 I will also go with a shorter bulk like you....as around the 2.5 hours  mark and looks strong and bubbly...One has to live dangerously...

is super important! I did a pitiful job shaping the batard, basically just rolled it into shape. I should have done a much tighter skin on it. Results are that it spread sideways in baking rather than go up. It did stay nicely together when I plopped it out of the banneton but I guess it wasn’t enough. 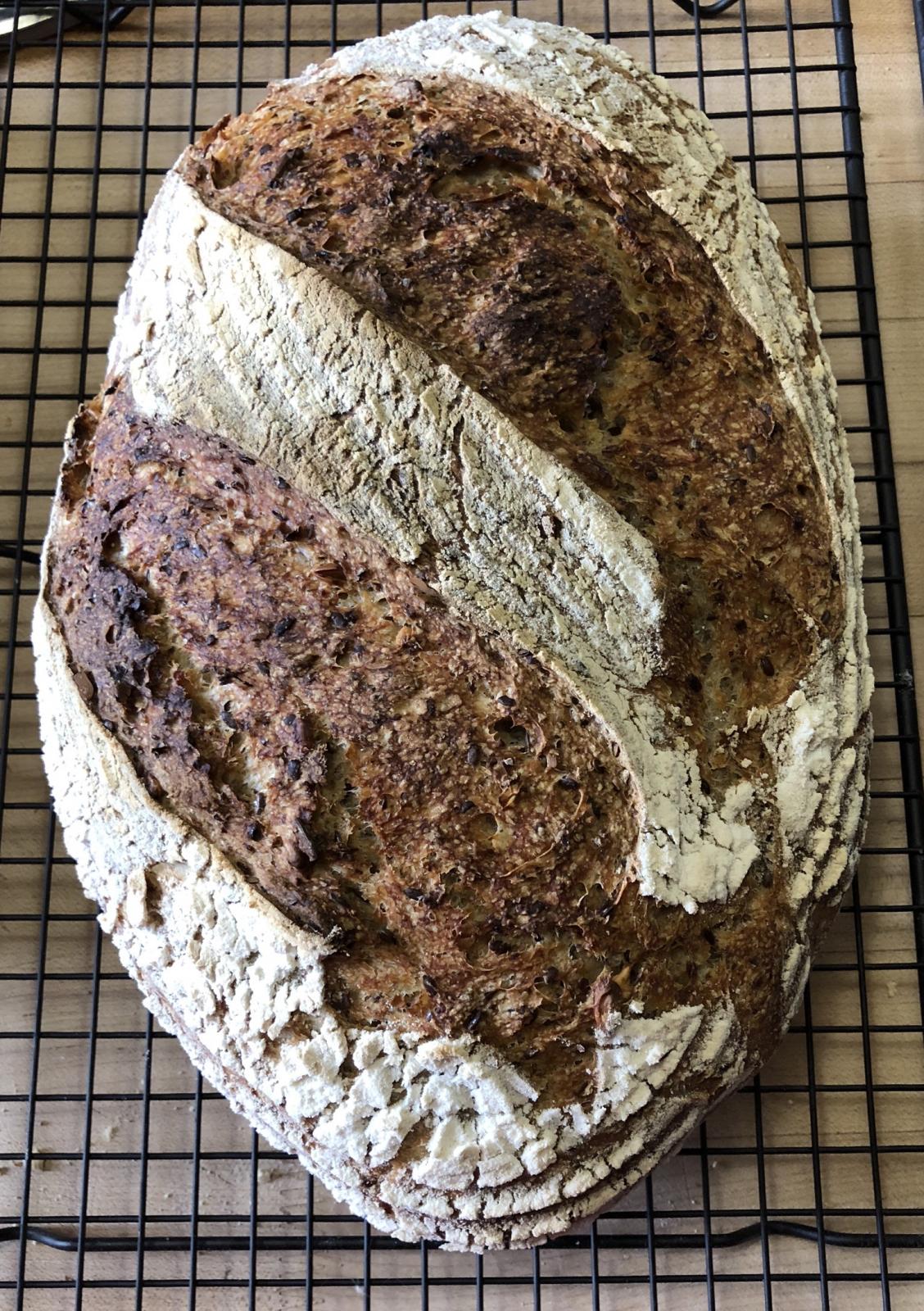 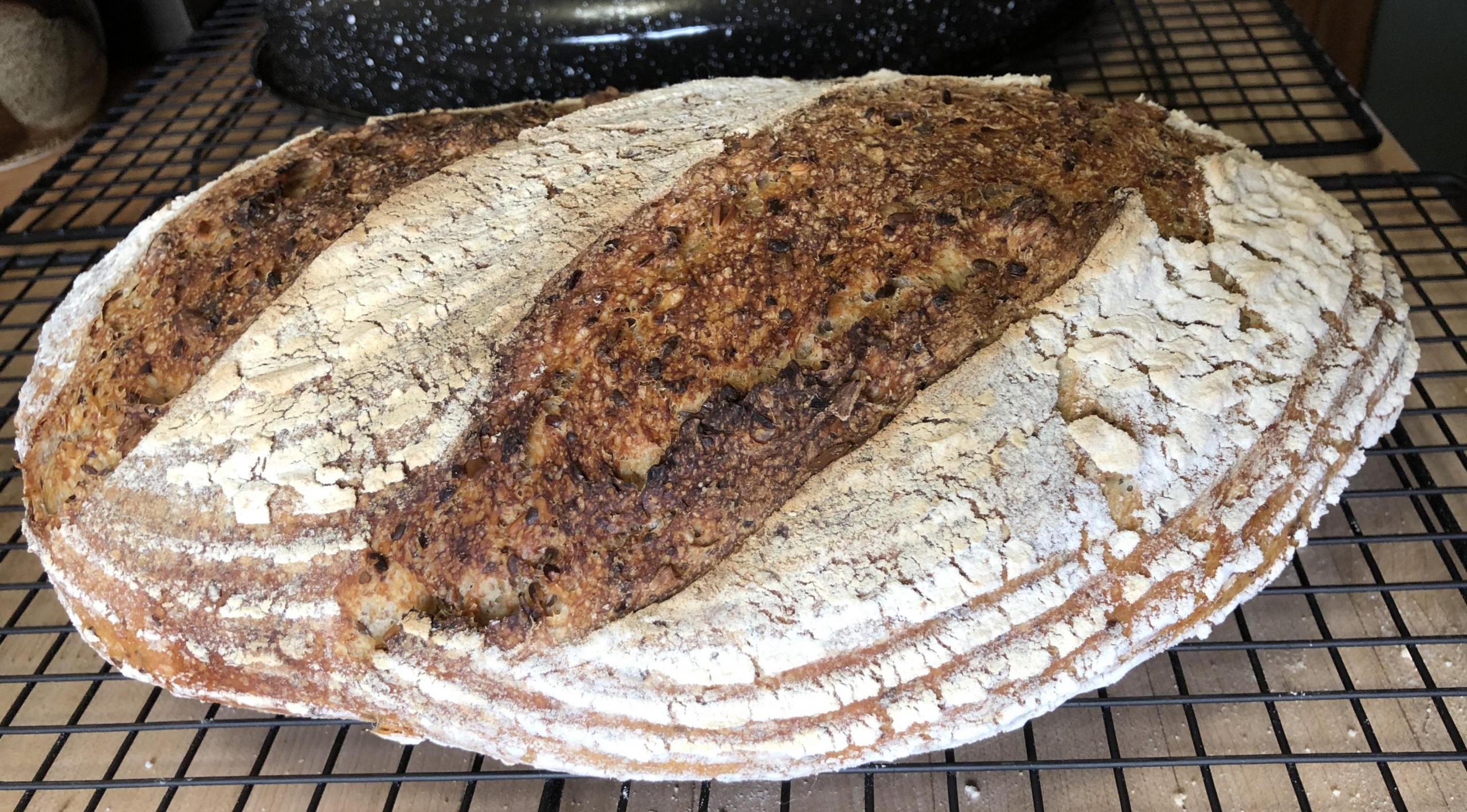 breads just from the first picture!  This one has a very nice soaker too and I bet the crumb will be open, soft and moist - can't wait to see it.  My only remark to the downside is that an autolyse is flour and water only  - no levain and and no salt.  What you are doing is making a bread without an autolyse at all.  Nothing wrong with that at all either people have made most bread that way for thousands of years.

You know this one is going to taste great as well .

I am happy with it and it does taste amazing! 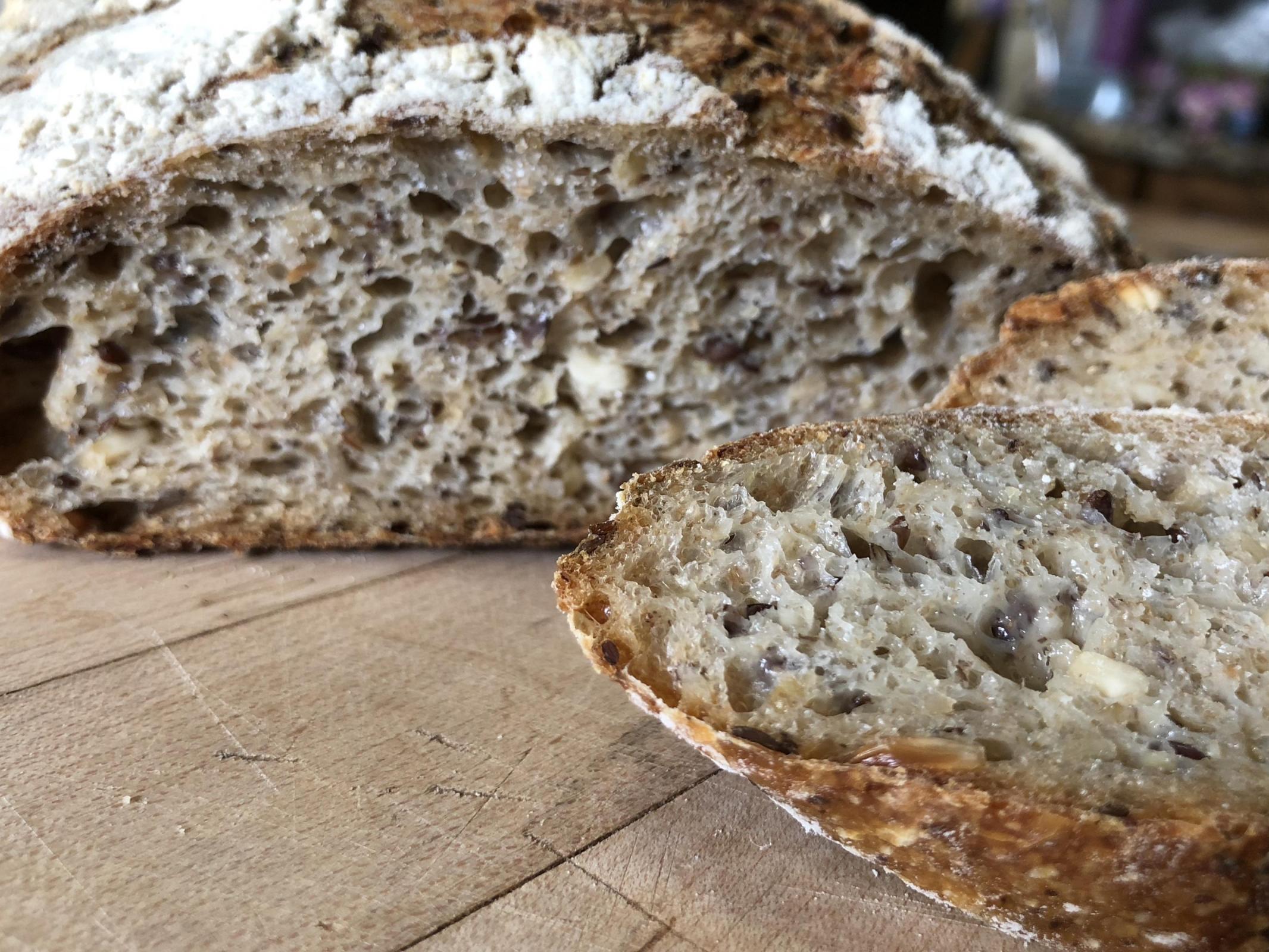 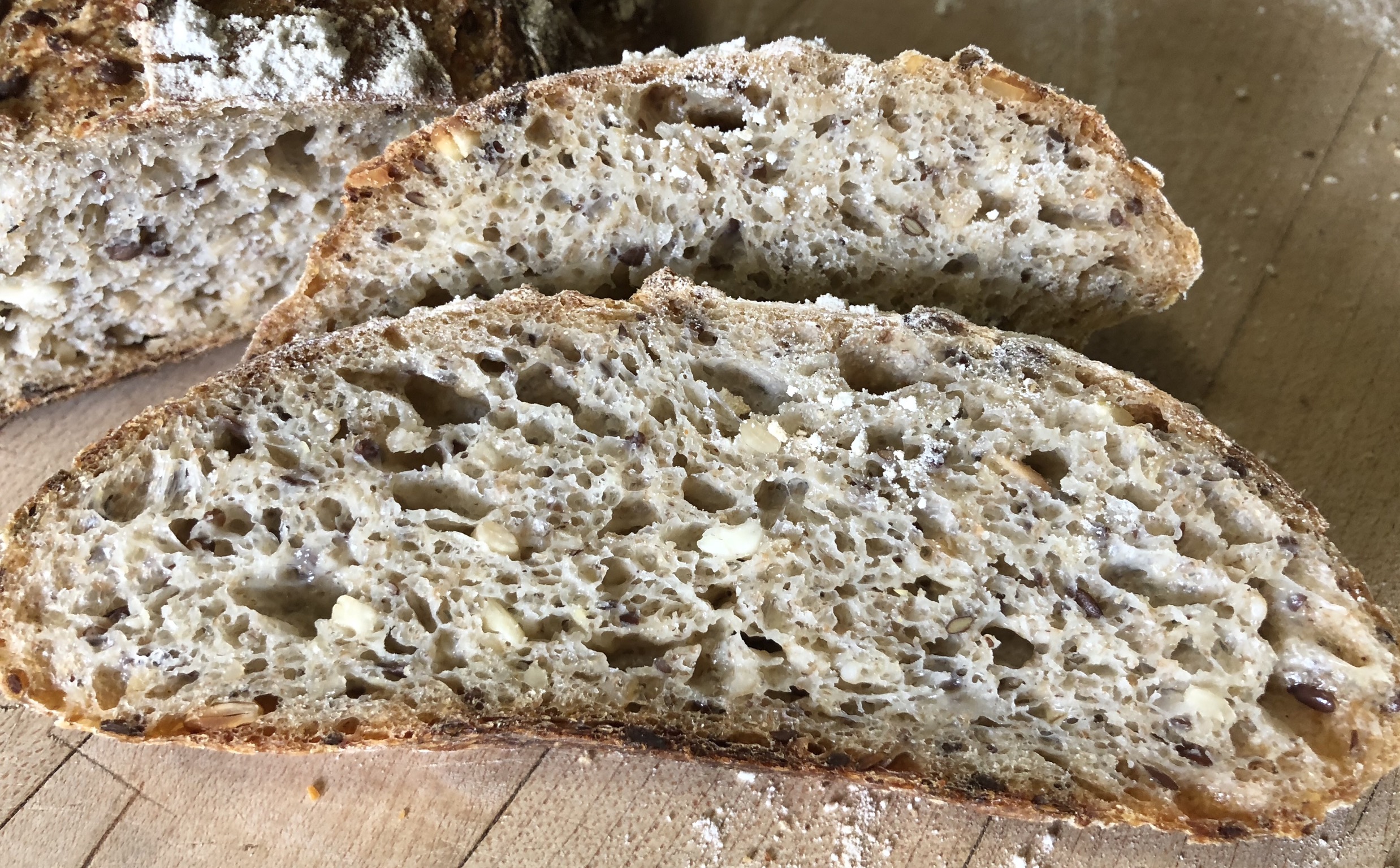 These are the kind of breads I  want to toast and put butter on with a bit of jam every other bite:-)  Nice

We sure missed you and glad yiu are back sharing your bakes with us.

I normally do my bulk rise in the fridge and shape the next day, rest and rise then bake.  Do you think you gained anything by this new method you followed?  The crumb looks real moist and open that's for sure.

crumb if I compare it to the last time I made this. Mind you, some of the ingredients are different but I am not sure that those can account for the difference.

What I did get was flexibility in time. Instead of watching the dough for a 5 hour bulk rise, I babied it for two hours and then it spent the rest of the time in the fridge.

Dividing and shaping were also much easier with the cold dough. I plan to stick with this for a bit and see what I get.

Aside from the bulgur, I am familiar with the other ingredients so I can construct the flavor in my mind. The boules look gorgeous. The overnight cold bulk fermentation works for me every single time.

Your loaves look stunning as always!!