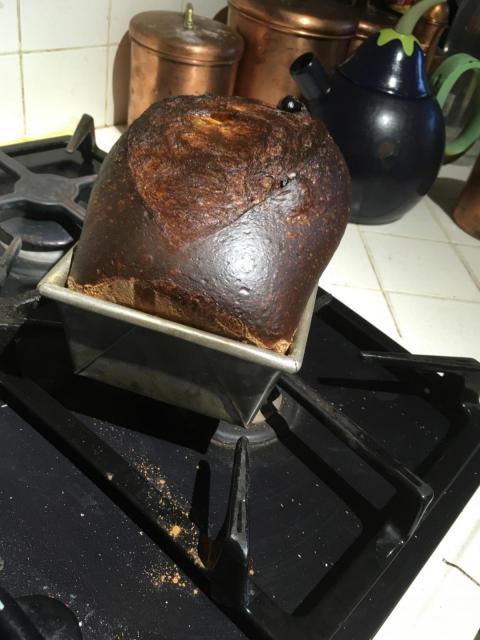 Using a recipe posted in 2013 by d_a_kelly for Panettone a tre impasti in June. My adaptation was to use mango yeast water as the water to build the first impasto and then a small amount ( 5gr) of stiff rye starter in the second dough build.

The first dough made Saturday late morning, the second late evening Saturday. The last build made Sunday morning and baked when it had tripled ( or perhaps 4x) in a loaf pan. Hand kneaded each step. Used Montana Flour and Grain unbleached white flour. It is a high gluten wheat flour. Baked it when it had risen past the pan lip. It was still growing. Could have used a bigger pan. Great oven spring. May not be able to cool it fully before the family riots. 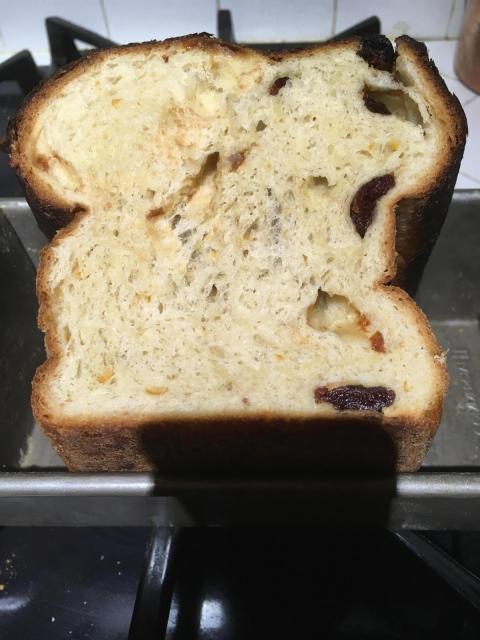 A little bit smooshed due to being cut open while still warm. Just used dried cherries in this (no candied fruit), so it could have used a bit more sweetness. Texture soft and shreddy. Not at all sour, despite the very long ferment time. I recommend the recipe - it was foolproof, just required patience.

amazing loaf with super spring! That looks so delicious and could not help my comment as it reminded me of my son outgrowing his clothes! I try to avoid baking breads like this as I would demolish that in no time! :D Kat

That’s very nice imagery. I know what you mean about the danger of this kind of bread. I usually stick to whole grain bread- delicious also, but less likely to consume in one sitting ;-). This one turned out better than my xmas panettone ever has - makes me think I need a proofer, as the main difference was the warm kitchen.

That is a LOVELY bread.

it was a fun bake.

oven while the door was closed.  That is what Panettone is supposed to look like!  I never bake panettone in the papers you are supposed to bake them in either.  That is some kind of baking you have going on there!  Bet it lasted about 10 seconds.  Very nice!

I have made many disappointing panettone over the years, so I was very happy with this. I do use the forms for gift loaves over the holidays. We only ate half of it in the first 10 seconds ;-).