I was wondering if anyone already had a sourdough formula for the dough for this Georgian cheese pie... the only English recipes on the 'net have amounts in cups and fluid ounces (and they're yeasted).

I don't need the complete recipe, just the dough.

A quick search brought up this recipe https://www.thespruce.com/georgian-cheese-bread-recipe-acharuli-khachapuri-1135515

It is yeasted but to convert to a sourdough simply take out the yeast and Pre-Ferment part of the flour and water within the recipe. How much is up to you depending on what you're after and how long you wish to spend on it. Add the Pre-Ferment back into the recipe with the remaining ingredients then watch the dough and not the clock.

Thank you for that recipe. It has the weight of the flour in grams, which gives me a good starting point. I think I saw the recipe a little while ago, but didn't look closely enough.

Wow that is a lot of dough. Just to make dinner for my wife and myself (for the khachapuri which is filled only with cheese, not with cheese and an egg) I divided by five and then I made some adjustments. For example, I can't divide the single egg by five. So for purposes of hydration, I counted one egg as being equivalent to 30 grams of water, and one ml of milk as being equivalent to 5/6 gram of water.  Adding all of the water in the recipe (actual and estimated) and ignoring the oil, I arrived at a hydration of 57%, which is much drier than anything I'm used to, but seems close to the original recipe:

(If my calculations were correct)

An odd thing about the recipe is that 2% of the flour in the original recipe would mean 23 grams of salt, but only one teaspoon of salt is called for...

We made the khachapuri today. Rather than make two small pies, we made one medium pie. I was using my (recently fed and) very lively AP starter with the above recipe, and everything took four hours from start to finish, from mixing the ingredients to cooling the pie on a bamboo steamer tray.

So I measured and mixed everything together and had a go at kneading the dough... threw some flour at it... and then realized that I have no feel for this kind of low-hydration enriched dough. I formed it into a ball, put it into a bowl and covered it, and let it hydrate for twenty minutes or so. Then I had my wife take over - low-hydration enriched doughs are what she is used to (in fact she thought that the dough was a little wet).

She kneaded it and let it rise. A couple of hours later, she rolled the dough out, put the cheese in the center, gathered up the sides of the dough, and pinched everything together with a little twirl. I thought that that was it, but then she pulled out a small rolling pin and started flattening it into a disk, maybe eight inches across. I was worried that the cheese would bust out of the sides but she has done this before. Not a lot, but enough to make it work. She says that if you have a lot of practice you can make the pie dough very thin.

We did not use anything like egg wash. The pie was baked for 20-25 minutes in a 430 F preheated large cast iron skillet. 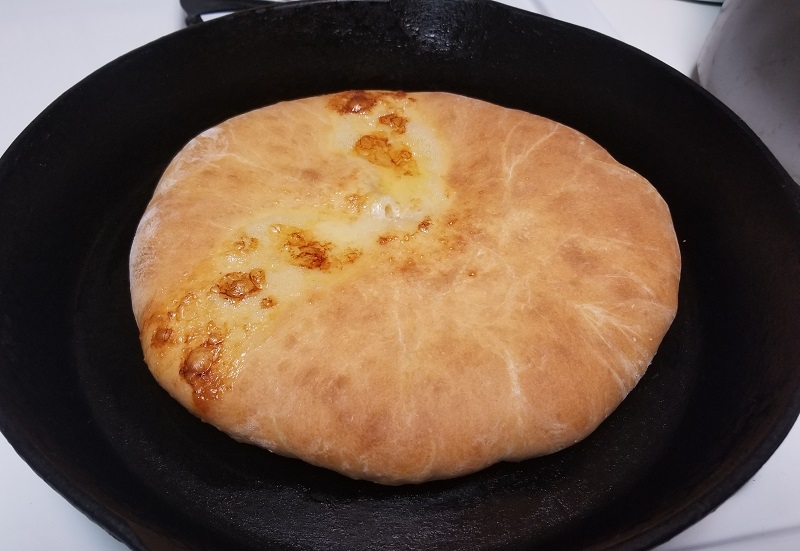 My wife was born in Tatarstan, in Russia, in the early 1970s. Savory pies are a cultural institution there. She has a copy of a 2014 cookbook (in Russian) titled "Ossetian, Georgian and Tatar Pies." I asked her how this sourdough pie crust compared with the yeasted pie crusts she remembers from Soviet times, and she said that it tasted exactly like them. Then she started talking about making more pies with sourdough crusts, filling them with beet greens etc. Heh. A success.

The Russian store in Washington Heights couldn't deliver until Monday, so no Sulguni cheese. We talked about it and we ended up using a mix of grated Raclette, Bulgarian feta and smoked mozzarella. Not typical to be sure, but we thought that it would be good. And it was! Very tasty!

Personally, I thought it was a little salty. Of course the cheese itself has a lot of salt (so THAT'S why the original recipe used only one teaspoon!) My wife disagreed though, she did not think it was too salty. I think I would still like to reduce it in the future from 4 or 5 g of salt to just a pinch.

And, we both agreed that it was a little dry. Maybe a little unsalted butter on top would have been just the thing. Or you could just do like the Georgians do, and dip it in hot sauce! 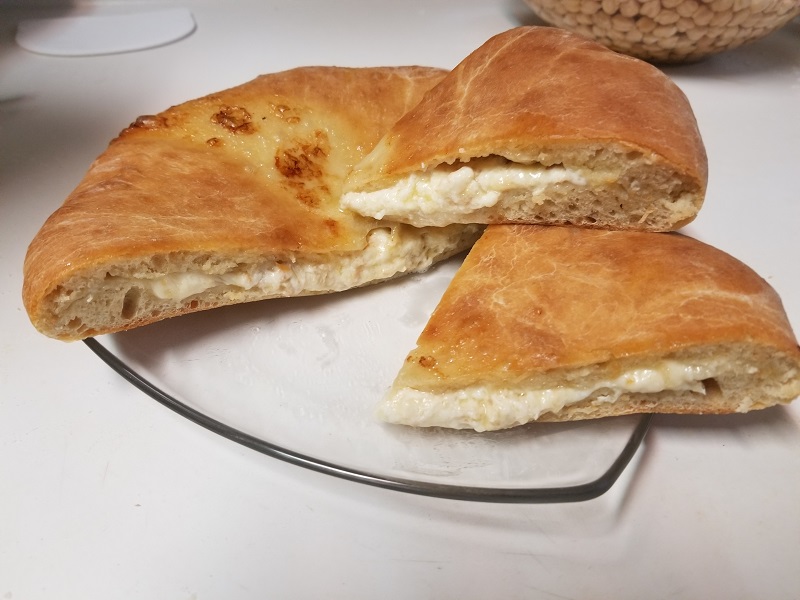 Overall we both enjoyed it a lot (and we still have half of the pie as leftovers). We'll definitely be using this recipe for pies in the future.

I think I'll make a slightly larger recipe by going back to the original recipe on The Spruce and dividing it by four (instead of five). If anyone is interested I could post it here.

That pie looks interesting and I love trying out different foods.

Thanks for your interest Danni3ll3! This formula uses 300 grams of flour instead of 235. The percentage of fermented flour is still 20%, and the approximate hydration (estimated in the way I described above) is exactly 57%.

*Many cheeses e.g. feta are noticeably salty. If using cheese (or cheeses) which are not, adjust the salt in the recipe up to a maximum of 6 grams.

And thank you about the suggestion for the salt.

we never dip hachapuri in any hot source or any other souce. It’s eaten on it’s own always.