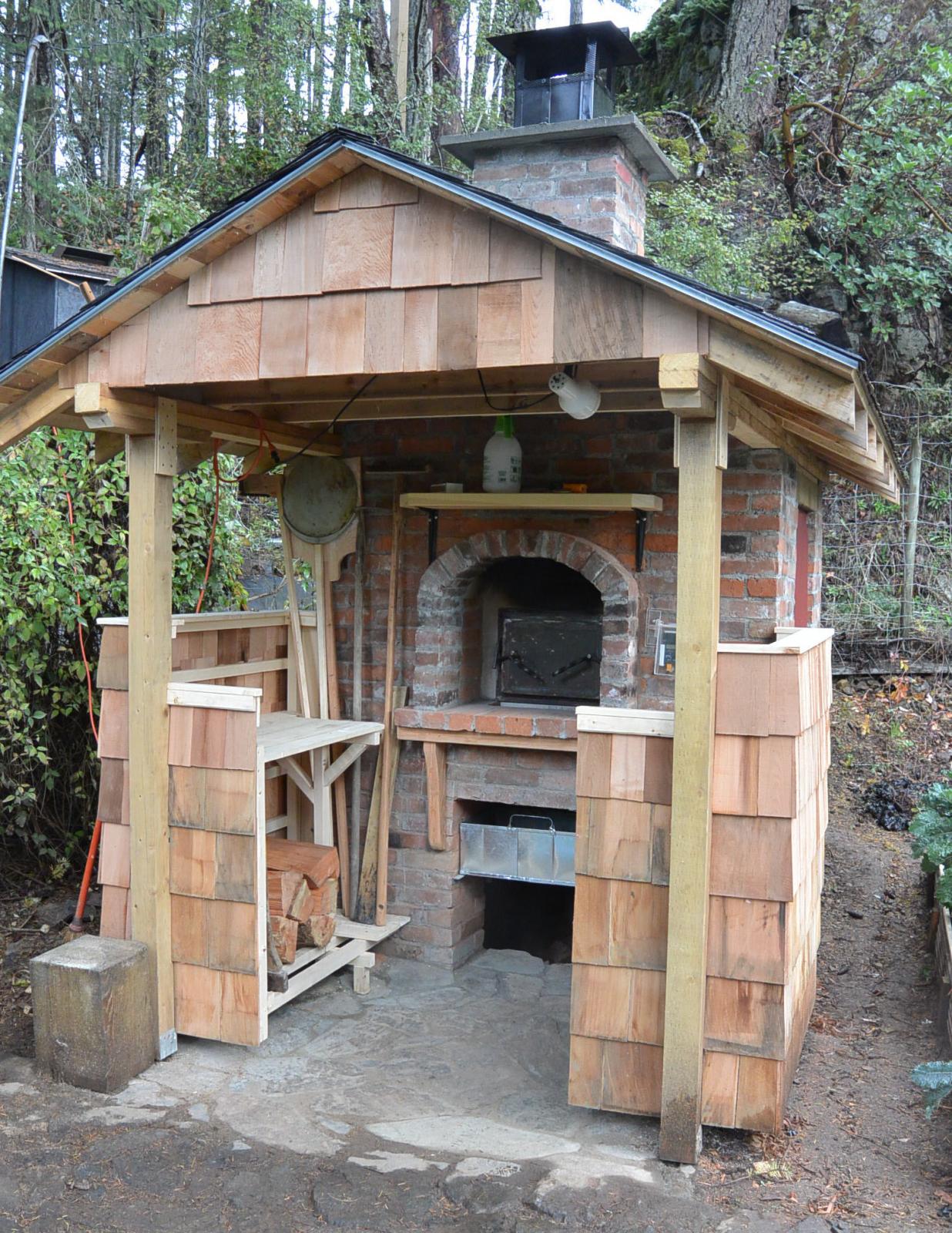 There are several things I have learned from building my brick bread oven that may benefit someone planning to build one.

It's a compromise.  Too big and it takes a forest to heat up, but can bake large quantities of bread in one bake.  Too small, and the oven won't maintain it's heat.  The advise I got was to build it with a hearth that is 30" x 36".  I thought that would be too large, but it turned out to be about right.  I can bake up to 8 loaves of bread at a time, but it only takes a couple of hours to heat up the oven.  One layer of firebricks laid on edge is sufficient with lots of insulation.  There is no need for extra mortar over the barrel top.

There is no need for expensive insulation designed for insulating boilers in steam plants.  Rockwool insulation from your local lumber yard does the trick perfectly.  It's rated for 2000*F which (by my estimate) give a 3 to 1 safety margin.   For the outside of the firebricks to get over 650*F, the inside of the oven would be a way to hot for even pizza.  I wrapped the firebricks with one layer of 6 inch insulation, plus an addition  layer of 4" insulation for a total of 10 inches of Rockwool insulation.

I wrapped industrial grade aluminum foil (available at Costco) over the fire bricks to reflect heat back into the brick and minimize drafts.  I also wrapped foil over the outside of the bat insulation.

It's true that you can't have too much insulation.  If I was doing it again, I would probably install an additional layer of insulation.   Lot's of insulation along with adequate thermal mass equates to a longer baking window.  If the oven is up to temperature, but the dough needs another half hour to rise ... no problem if the oven is built right.

Installing a thermal couple was the best piece of advice I got.  I drilled a hole from the outside of the firebrick about half way into the brick, half way up the wall.  When heating the oven, this is the temperature gauge I watch.  You can get a thermal couple on ebay for just a few dollars.

If I bake once a week, the oven will still be warm (about 80*) before I light the new fire.  If I don't bake for several weeks then the firebrick and insulation will have absorbed moisture from the humidity in the air.  It will then take longer to get the oven up to temperature because it needs to heat up this moisture, and 'boil' it off.

It's easy to get complicated with steam injection but there is no need.  A good garden hose sprayer on the mist setting does the trick.  After the bread goes in the oven, I just spray in a mist of water before sealing the door.

Extending the roof to provide some dry counter space by the door of the oven, is well worth the effort.

Great practical information for home bakers thinking about building their own WFO. Bookmarked for future reference.

As wild-yeast said, very practical and useful information.. thanks for sharing!

It is always great to get an after-action report that speaks to experience instead of intentions.

Thank you so much!

All the research I did before building, and managing my oven, spoke of using a damp mop (or variation) to remove the ash from the hearth after the fire was removed.  But I also read about the possible of damaging the fire brick when misting the oven at the start of a bake.

My experience has taught me that cleaning the last bit of ash from the hearth with adamp mop (or equivalence) after brushing it out with a brass bristled brush is a complete non issue.  Simply don't do it.  The ash is very fine, and is the result of a very hot fire .... ie there is no harmful creosote.  The loaves of bread come out with a fine dusting of ash on them. but a simple brushing off and they're 'good to go'.

With regards to misting the oven, as I pointed out above, a good garden sprayer on a mist setting does the trick.  I don't believe there is any (much) stress on the bricks if the mist is fine enough.  The mist turns to steam pretty much before it makes contact with the brick.

I have read that the mist is absorbed by the bricks.  I don't believe this is possible, because the temperature of the bricks are above the boiling point of water.  True, they will absorb some steam, but I have found that the amount isn't particularly relevant.  It just takes a quick shot of steam and a quick hand on sealing up the door to create enough steam for baking.

Good info for us beginners! I made my oven bigger then I needed to but not gonna change things now!

what a nice addition to a back yard. Do you use it for other foods or just breads?

Bread can be baked as simply as spreading the dough on a hot rock. A simple oven made of loose rocks can make better bread. The point is that basic bread can be made simply, but if you're on this website, reading this message, I'm assuming you're interested in baking high quality (artisan) bread.

After developing methods to bake artisan bread in my wood fired oven for (only) a year I'll share what I've learned.

Developing a knack for heating the oven to an acceptable temperature range takes practise. Keep in mind that if the oven is a bit too hot when the dough is ready, you can leave the door off the oven and blow cool air in it to cool the oven walls. But if the oven is too cool …. it's a problem. If you light a small fire to bump up the temperature, you're going to have a hot spot where the 'small fire' was, and burn the bottoms of your bread.

An oven door that seals tightly is essential. Cool air travels across the hearth, rises, and goes out the top of the door opening. If the door doesn't seal properly a good portion of the hearth (closest to the door) will be cool relative to the rest of the oven.

Finish the burn by raking the fire up near the door to heat this area before raking out the fire and closing the door.

I rake out the fire when I think the oven is hot enough, close the oven door, and then let it sit for two hours. By then the temperature of the bricks will be consistent throughout their entire mass and all parts of the oven will be within a few degrees of each other. This will only work if the oven is well insulated.

If you're baking with a wood fired oven, timing the processes is very important . You therefore need a proofing box to regulate the temperature while proofing the dough. I built a proofing box, but a small bedroom or even a second bathroom would work just as well. You just need to be able to raise the temperature and keep it steady. I only use natural yeast (sourdough) in all my breads and I time things around a proofing temperature of 26*C (79*F)

An old fashion razor blade works well for a lame, but ….. it has to be clean (as well a sharp). If there is the slightest bit of dried dough on the blade, it will drag the dough and make a mess of the hash marks.