This morning's bake.. The recipe comes from Sarah Owen's Sourdough book. The inspiration was from Danni33.

It's the first bread I've made from her book. Given comments on the board about difficulty getting it to rise, I performed bulk in my oven with the light on. I think it took about 5 hours for the dough to double. it was slow at first, but really came together in the last hour and rose quickly. I probably could have shaped and put it in the fridge sooner. She calls for a 3-4 hour bulk. I had it shaped in the fridge by about midnight, and baked by about 9 this morning. By reducing the bulk, with the same time in the fridge I think I would have had a better oven spring. It seemed slightly over fermented, but I'll know better when I cut into it. I was quick to slash and didn't think it through before I did. I cut a bit deeper than I would have wanted. It's my first porridge loaf so I'm looking forward to giving this dough a taste later today or tomorrow!

I have  question about steam : in the recipe she calls for 75 g of water in a tray to create humidity and then spray the oven walls a few minutes after you load the dough.. 75 grams seemed too little to me so I added twice that.. how much water do you put into your tray when you load the bread? Can you have too much? 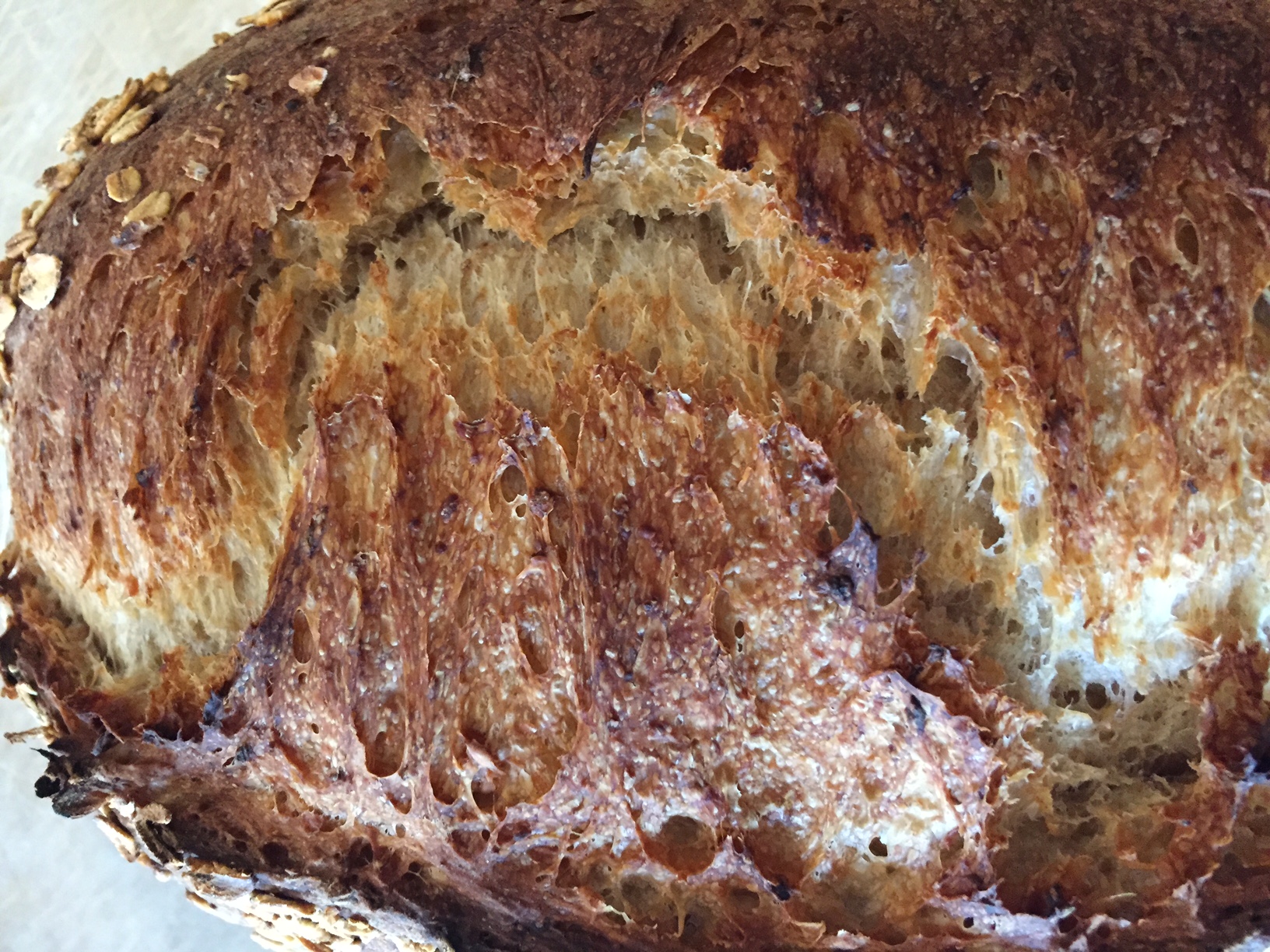 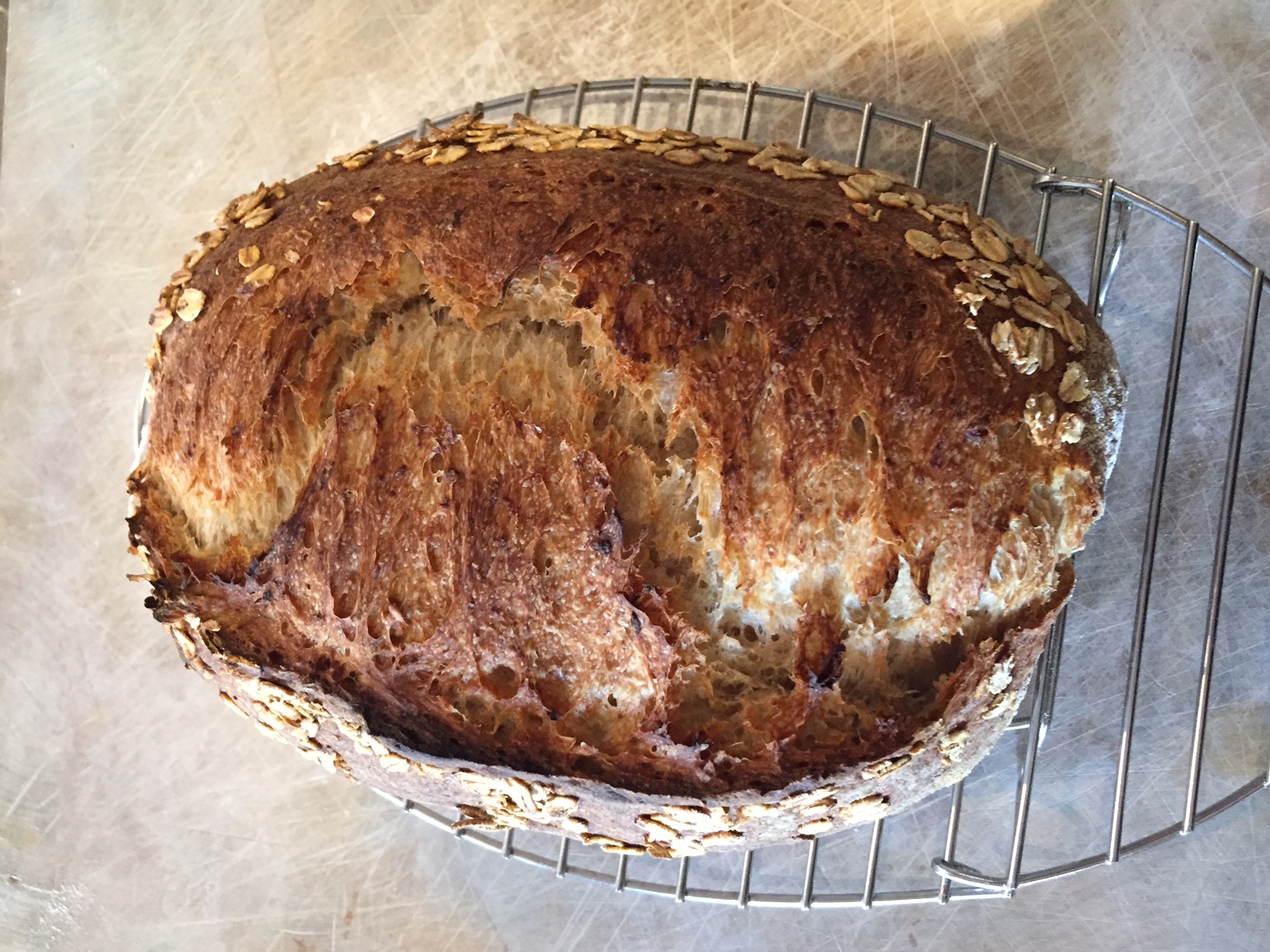 You got fantastic oven spring! Look how wide your scoring split open! That is a stunning loaf!!! You did a super duper job! I don't think you overdid the bulk at all. My loaves take 5 hours to double in my oven with the lights on and the door cracked open.

As to water in the pan, the more steam you can create the better. I do mine in Dutch Ovens so I don't do the pan with steam. If you do a search on steam, you will see a number of different techniques and some Fresh Lofians even combined them to get what they call mega steam.

This has to be the fluffiest and lightest crumb I've ever baked.. great creamy, sweet-but-not-too-sweet, early flavor.. and the crust is soft too.. what a great bread. Thank you for the help... 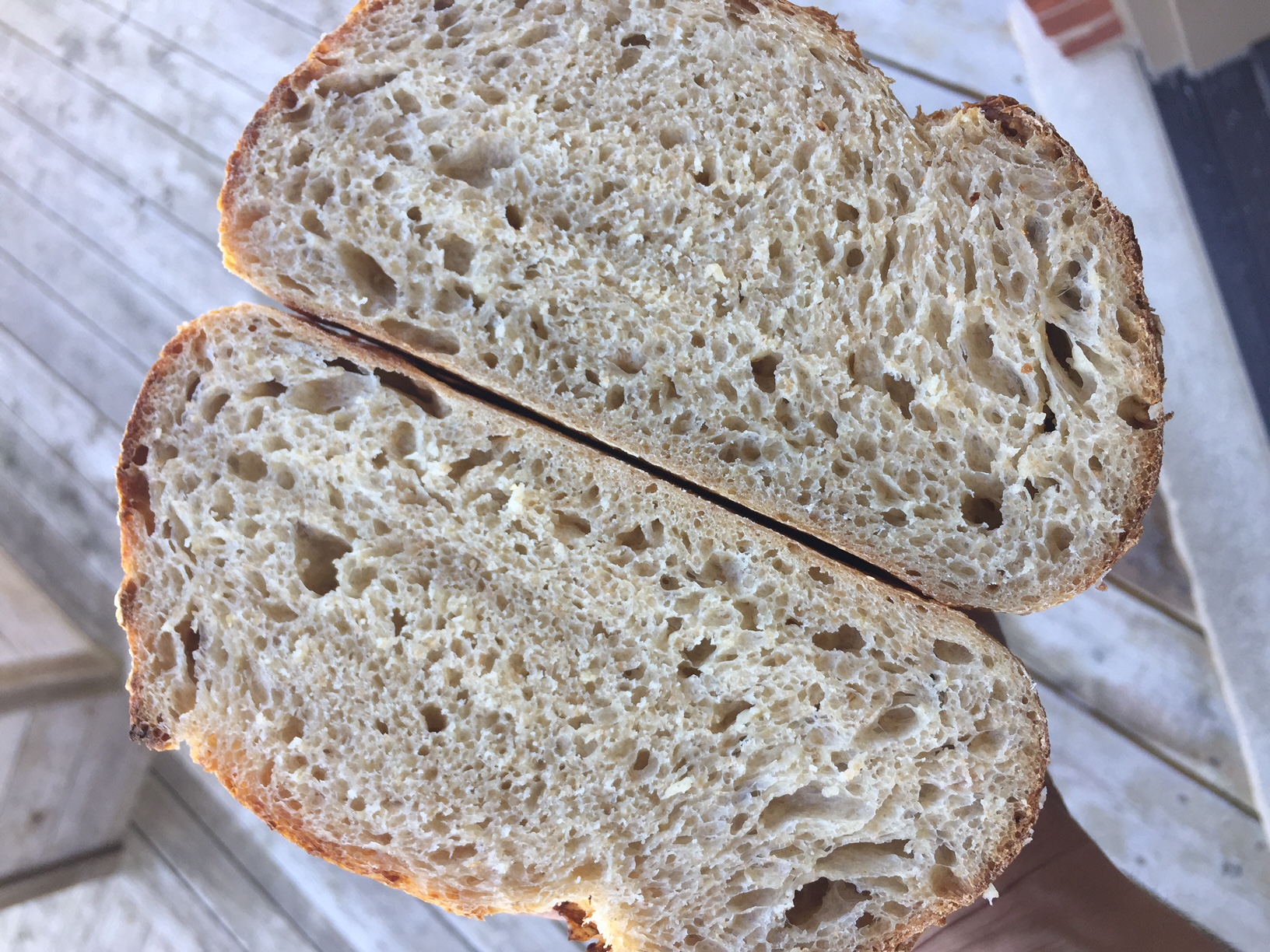 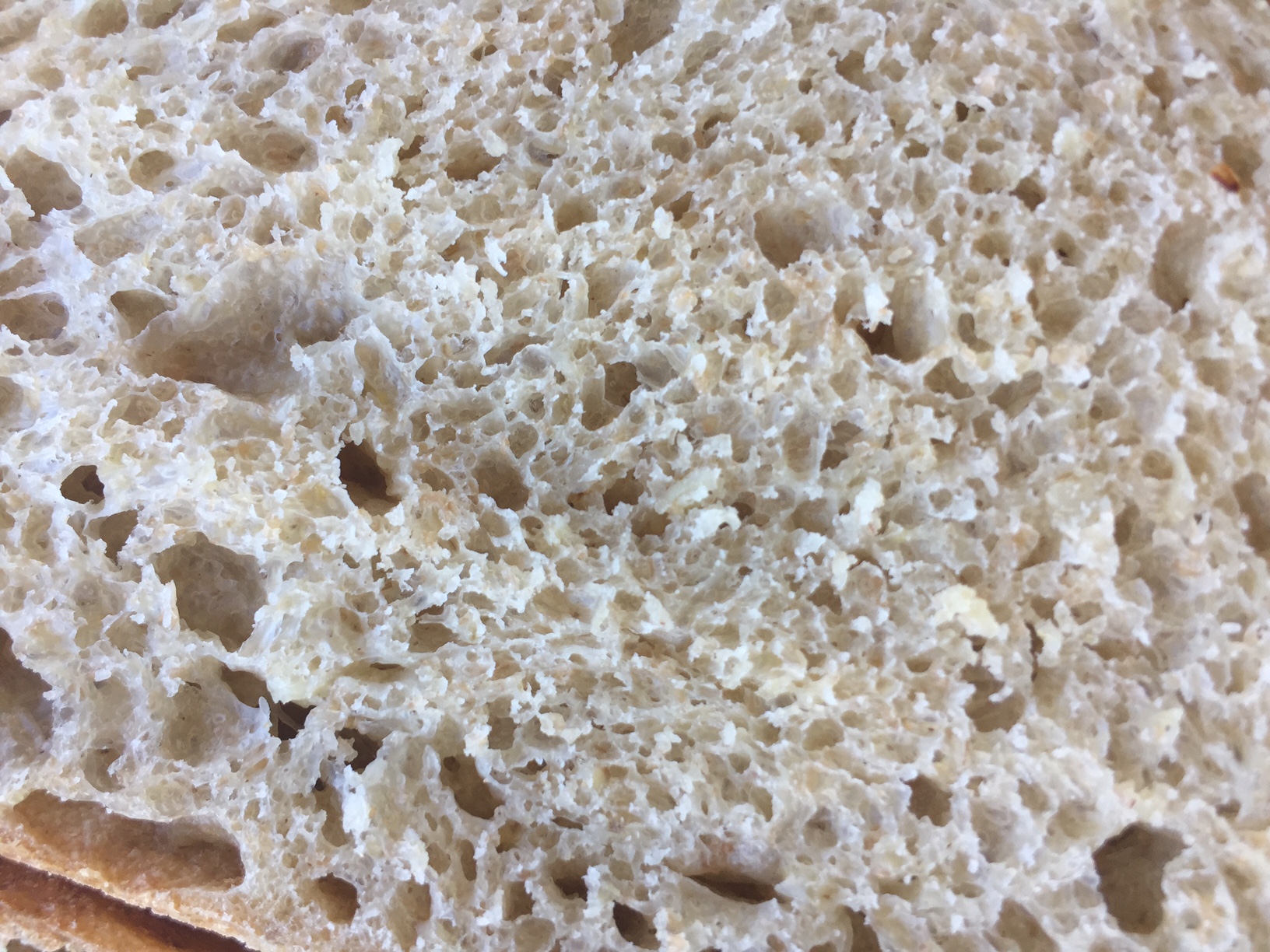 It is a nice tasting loaf, isn't it? And you are very welcome!

What ever you did I wouldn't change a thing.

Oh my, that is beautiful inside and out! I love the way porridge breads develop such a soft, moist crumb. As for steam, I usually pour about a cup of water into the steam pans (two foil pans with lava rock) each time I load loaves into the oven. I don't advocate the spraying technique, as it affects the temperature of the oven too much. Either that, or I cover the loaves and let them steam themselves!

I didn't think about the impact on temp, but it makes sense now that you mention it. I also wonder how long the humidity needs to remain high? When I placed water into my tray this morning, it evaporated almost instantly into steam. I suspect using lava rocks is used to delay that evaporation with all the crevasses? Or if it would have been just as quick.. not sure. Lots to learn! Thank you -

great oven spring, lovely crumb!  yum.... I want some, will have to do this again too.

I was thinking about this bake today and wondered if it's possible to recreate the tenderness of the crumb without using oats? I've never made a bread with a crumb this "soft" if that makes sense. Is it possible? I've had soft sourdough breads at restaurants, and can't believe many if any of them use something like soaked oats.. how do they do it? This was truly superb, but I can't imagine restaurants go to the trouble of adding oats..  Curious minds want to know....

as opposed to "real" sourdough? I have seen at Bulk Barn sourdough flour so maybe they use something like that?

Maybe the question should be, what's the softest fluffiest (for lack of a better description) crumb bread recipe you've ever made that didn't include oats.. if you think of a rustic Italian loaf, or baguette, they CAN BE soft in a different way than I experienced with oats.. what would be your non-oats softest bake be? maybe it's just not possible.. maybe it was the influence of the spelt (as I've never baked with it before).. not sure..

Look up my recipe for Prospector buns. I haven't made those in a loaf shape but I don't see why one couldn't.

Hum, had a thought... You still want sourdough based? Because those buns are made with yeast so they are probably not what you are looking for...

How else without adding something like oats could you get that kind of soft crumb and crust.. it's not so much about finding another recipe per se, but understanding if it's possible without an additive like oats.. not important,, just a curious thought.. thank you just the same!

Fat might might be what you are looking for considering there are 7 g of fat in 100 g of oats. I know adding any kind of fat such as oil, butter, yogurt, kefir or milk will make the bread softer. I add kefir or yogurt to my bread because I like the extra tenderness in the crust and crumb that it produces.

Can you recommend a good yogurt or kefir recipe? I'll put it on my to-try list.. Thanks

or kefir to support local businesses but you can make your own.

For yogurt, you will need to buy either some plain yogurt with live cultures in it or a dried culture. I find the plain yogurt works just fine. Heat 4 cups of milk to 180F and then cool to 110-115 F. Stir in a tablespoon of your reserved yogurt and put into a yogurt maker or somewhere that will keep your milk at 110 F for 8-16 hours. It is done when it has gently solidified. Refrigerate.

Kefir i have never done but I understand you need to buy kefir grains from someone. Check Kijiji as I believe I saw on there that someone in your neck of the woods was selling grains. You add milk to the grains and leave everything out on the counter at room temperature until the milk has thickened. 24 hours if I remember right. Pour through a strainer to retrieve the grains and store your kefir in the fridge. The grains need to be gently rinsed in milk and then place them in more milk to make more kefir.

Of course everything has to be very clean so you don't contaminate your product and make yoursef sick.

I thought your suggestion was going to be, to just add yogurt as part of a bread recipe. Is the idea that you are creating a levain with the yogurt - which is why you are wanting it to develop for 8 - 16 hours?

Actually, I just replace some of the water, anywhere from 30 to 50 grams, with the yogurt or kefir. I don't follow a set recipe so I just started with a bit, liked it and am slowly increasing the amount. You may need a tad more water as the yogurt or kefir don't quite have the same hydration power as water.

Now i am bowing out of this thread. I'll let the real experts answer you. ;-)

All good.. it's what happens when you've got so much knowledge rambling around in your brain!.. you're a great resource! As always.. many thanks.. bake happy! :)

That loaf looks better than most  bakeries.

is to do a Tang Zhong with about 10% of the flour in the mix.  Use yeast water instead of yeast or SD and a bit of butter (tastes better than oil) and some cream for the liquid.  All together and you have Japanese Sandwich Bread that has the softest, most shredible crumb around.

Is there anything about bread you don't know?! Unbelievable.. thank you for the advice!! I'll put it on the list of things to try! bake well.. or at least bake happy..

Community Bake - The Approachable Loaf by The...
Help With Getting a More Open Crumb
Autolyse with No Knead?
No Knead Bread and the Crumb
Whole wheat poolish country loaf
END_OF_DOCUMENT_TOKEN_TO_BE_REPLACED