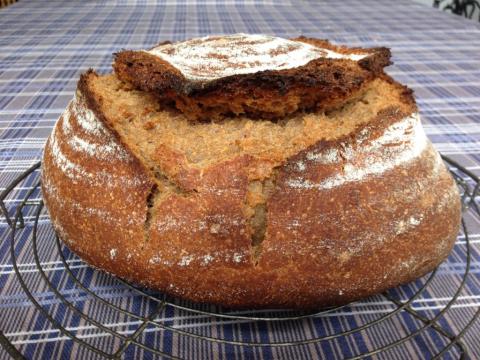 I've been baking this traditional sourdough for quite a while now.

The method is described here:

I changed it by using rye sourdough starter rather than wheat as called for in the description, and because I was a little low on whole wheat flour this particular bread has a higher proportion of spelt.

Proofing was done in the fridge overnight and the dough had risen nicely and appeared to have nice gas bubbles in it. I de-gassed only lightly, formed a boule and rested in a bannten for about an hour before baking in a cloche.

My question is: Do you think the crust is broken up too much. I slashed the bread but it almost looked as is if the top came off like a 'square academic cap'.

Kind of scholarly, come to think of it :)

But what would be the reasons for such a break-out? Too little de-gassing, should I have given it more time for the 2nd proof?

Thanks for your input.

Most of us would give our first born to get oven spring like that. (Just kidding). I think your loaf looks fabulous!!