It's been a long time since the last pizza

It's been a long time since the last pizza 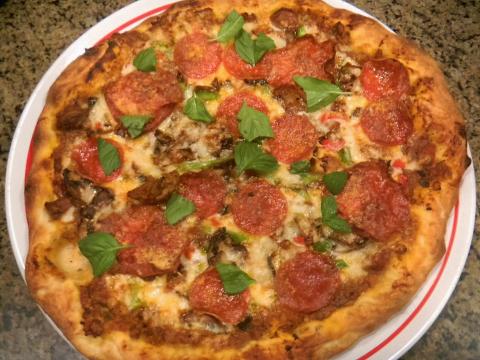 Lucy couldn't even remember the time we had pizza - and we love making pizza nearly as much as we love eating it.  This one had a fast crust since we didn't decide to have pizza until 2 PM for dinner at 6 PM. 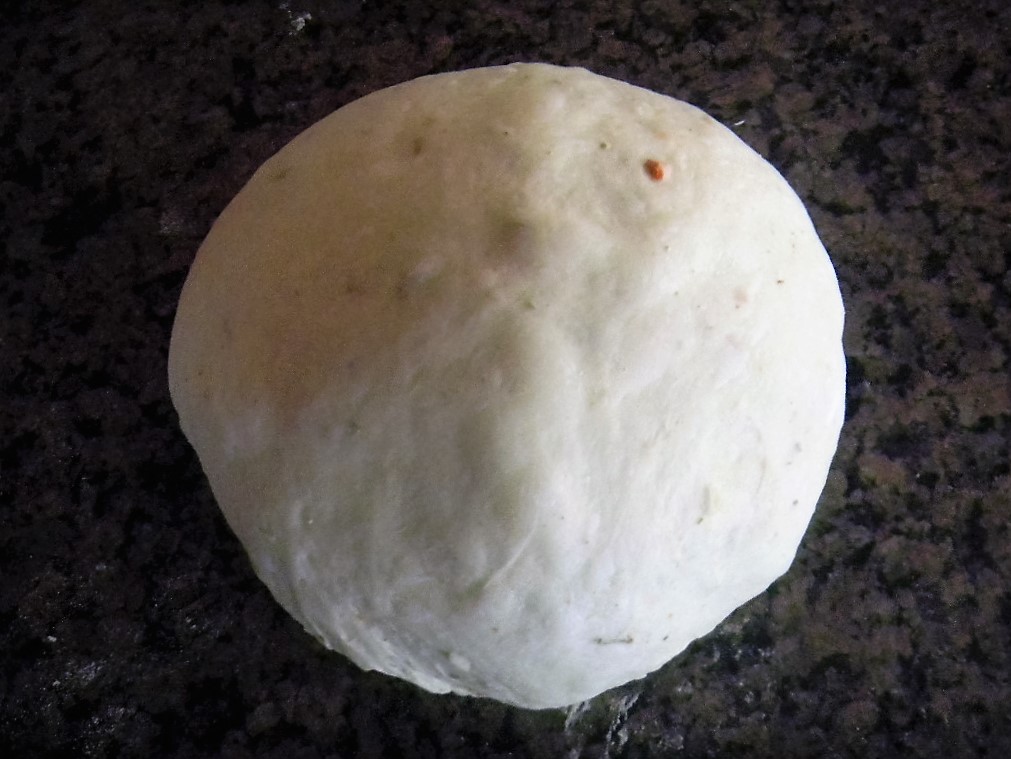 Se we went with a fast dough using a couple of large pinches of instant yeast, have high gluten and half bread flour and no whole grains. I hope Lucy doesn't burn in doggy hell for this. 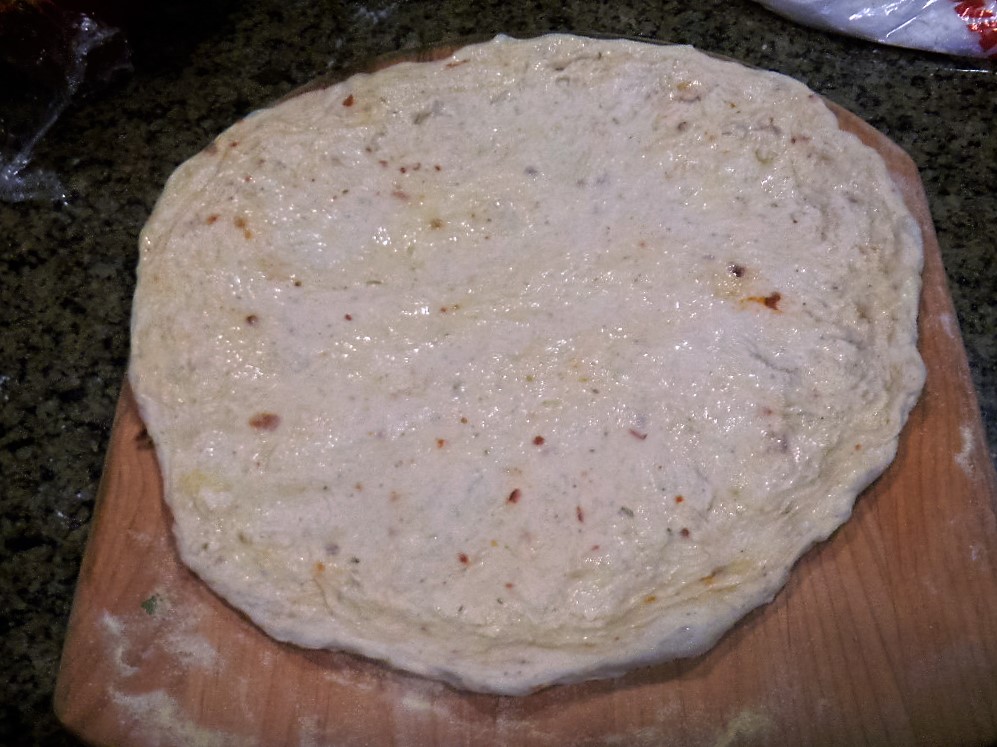 We used 71% hydration and added in some rosemary, sun dried tomato, garlic and olive oil.  No autolyse this time.  We slap and folded it 3 times and then twice more for 8 times each over the first hour on 20 minute intervals and then folded it 3 times over the next 3 hours. 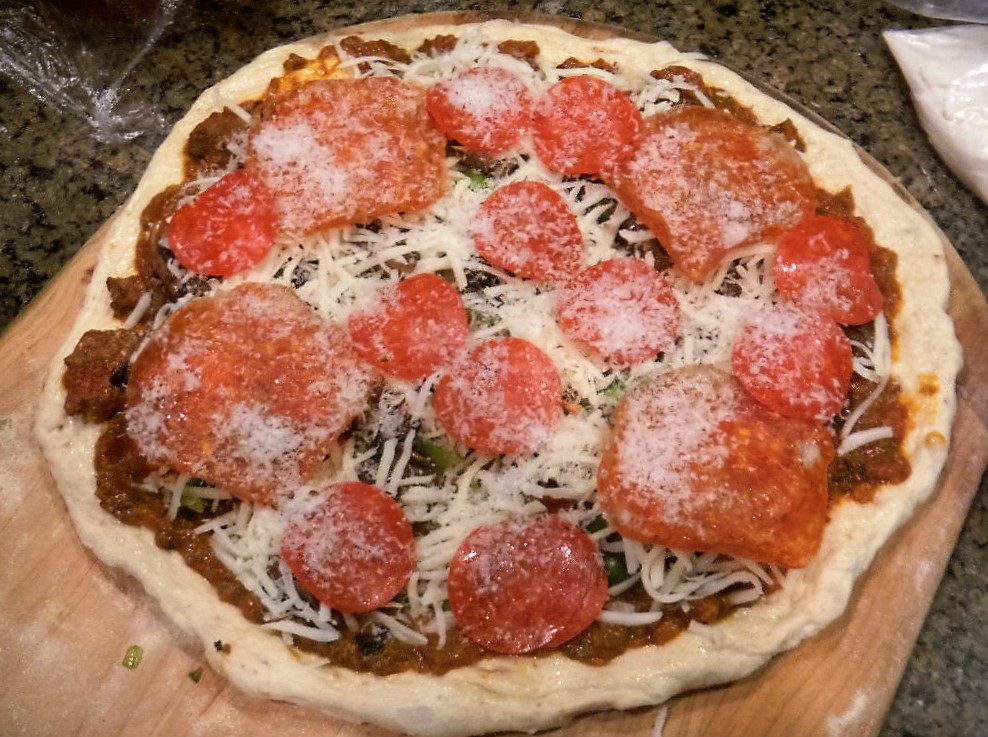 By the time pizza forming time came around the dough was billowy and had doubled in size - perhaps a bit more.  It shaped great with no tears and we only had to let it rest once for 5 minutes to get it into a pie shape. 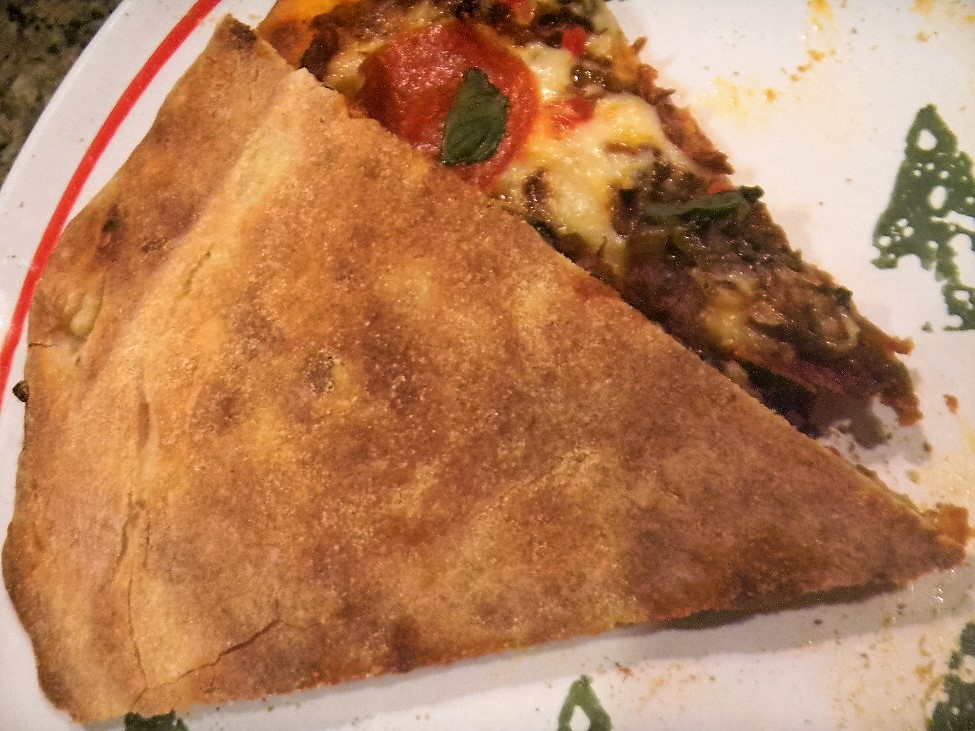 We brushed on some olive oil and used some sausage meat sauce we found in the freezer for the covering red part.  Then came the red and green peppers, caramelized onion and crimini mushrooms, then the pepperoni and finally the mozzarella and Parmesan cheeses. 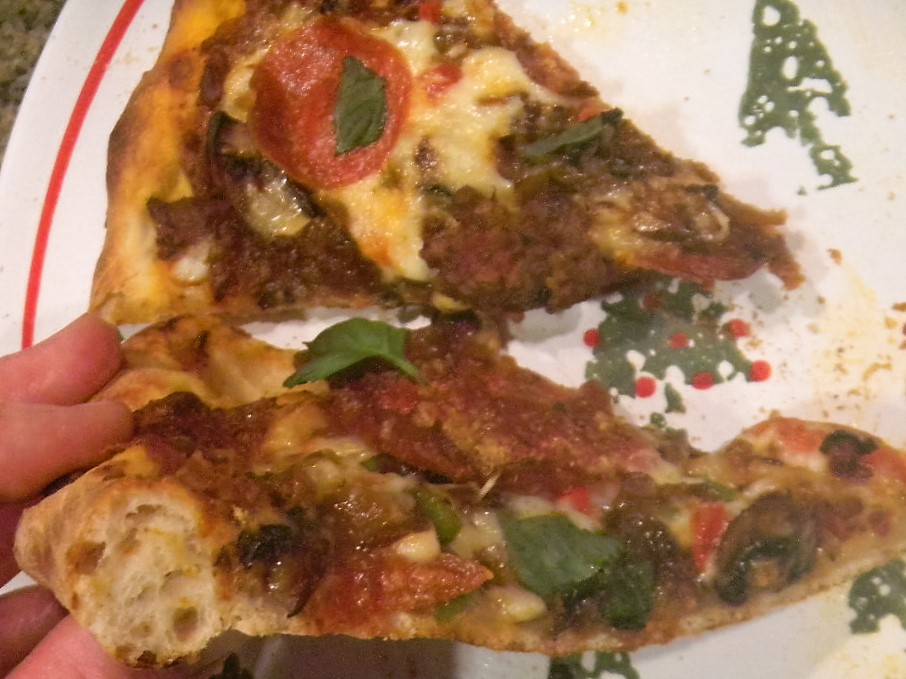 So this one was nothing fancy.  It baked for 5 minutes on the bottom stone and then 5 more minutes after being spun - all at 550 F.  This one came out of the oven a nice looker for sure. 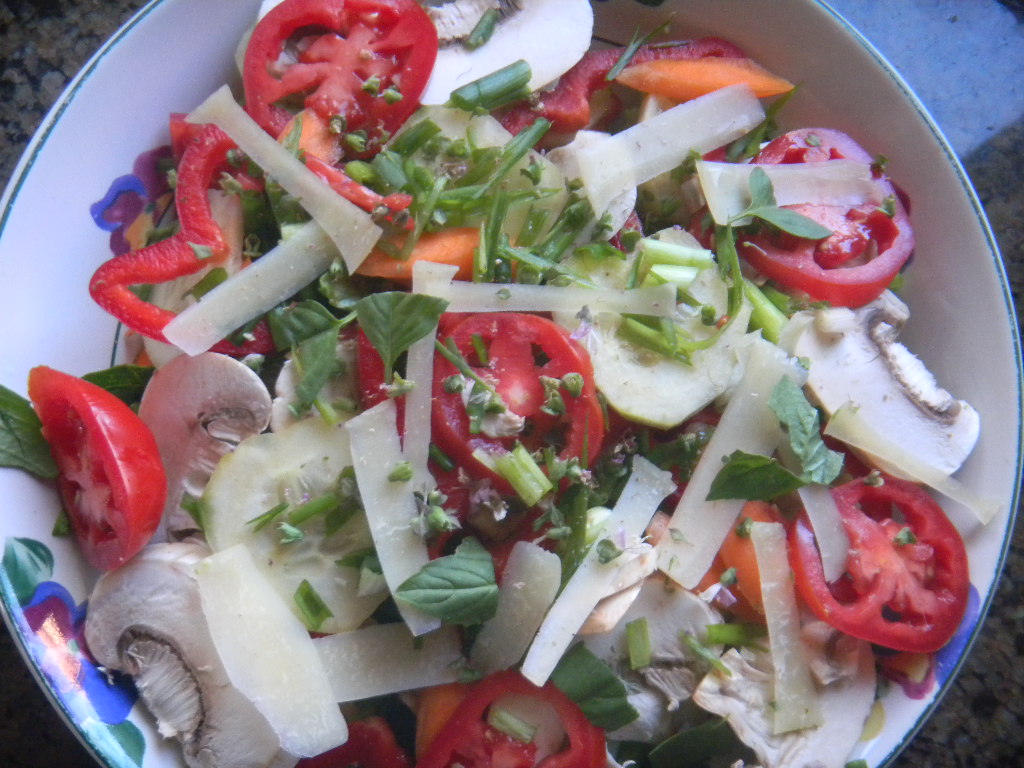 Have a salad with that pizza.

The crust was browned evenly on the rim and underneath, it was very crisp, the way we like it and not foldable soggy like NY pizza.  It tasted great with a fresh basil garnish.  My daughter said it was her favorite crust to date which is saying something.....but for me, I thought it was pretty good but nit as tasty as some sourdough ones of the past.

There were only 2 pieces left over from the 3 of us - we just don't eat as much as we used to -  no matter how good it tastes!

I'm surprised there was any left over :)

topping known to man or beast.  I know what I an having for lunch today too  if my daughter doesn't beat me to it!  5 minute on toast should get it back in shape and crisp it back up again.  Can't stand floppy, fold up pizza:(

I'm with you... not a fan of that soggy stuff. In fact, my very favorite pizza is what I call a pizza cracker. I'll open a pita bread and spread one side lightly with pizza sauce, then a sprinkle of cheese, and hot pepper flakes. Toast it up and crunch away.

I'm told that poor-quality cheese is the main culprit in a soggy pizza. Who knows? I tend to load it up if I'm going all-in. Did you say you brushed with oil as a moisture barrier?

I put a light brush of oil on the pizza crust to keep the sauce from moohing up my crispy crust!  going to all the trouble to make it thin then have it turn to a soggy bottom fiasco would be horrible.  I donlt think it is the cheese that makes it soggy since the cheese goes on top of everything else just to it won't do that.

I love your pita pizza toastums!

Glad you liked the pizza Murph and happy baking

though so we put it on the salad:-)  It was yummy pizza!

Looks delish!  Funny, I knew it was yours as soon as I laid my eyes on the photo. I am due for a pizza.  I finally found a little 1KG bag of 00 flour the other day and need to see how that works. Happy baking! Ski

certain look to it:-)  Glad you liked the post and hope your pizza turns out just as good as this one Ski

That's some fine looking "quick" pizza if ever I saw one.  Look like you got some good color on the crust and bottom too.  I was just talking to my boss in the 4 hour car ride back from NJ in the rain about the best pizza places in NY and LI.  Yours would fit right in!

pizza place just about anywhere in the world it seems.  That is why pizza is it's own food group in the food pyramid along with pastries, cake, pie and and cookies, beer, chocolate, BBQ, ice cream, bread, wine and spirits :-)

You need to get that grill attachment going and get some pizza baking away in the back yard before it snows!

Lucy sends her best to the furry ones back East!

dabrownman:  I am trying to catch up on the site, and the first thing I saw was Ian's post on the English muffins and now your pizza. Wonderful!   The crust looks about as good as it gets.  I am not much of a meat eater, but pepperoni is one of my faves on pizza.

I just got back from five weeks away and lost my sourdough starter here in California It was a disaster!  AND the English starter smells terrible. My niece feeds it, and it seems to pop up OK when I feed it, but it's  a bit stinky.  I did a post, but it didn't turn out quite right--just like the starter.  I am trying to rescue it, using my gluten-free starter and converting it.  What an experiment; sure hope it works.  I'll continue to review all the wonderful bakes on the site and hope I can get my groove back.  Take care.  Phyllis

I put my NMNF starter in the fridge for 10 weeks before I even start to use it!  You got t robbed!  I think the one you are trying to nurse back to health will fit as a fiddle in no time. and your bread will up to par.

Glad you are back from your travels and will will be well soon enough.

I just wasn't feeling well today (jet lag, I think), so I didn't cook and my husband had a frozen pizza for dinner he didn't like, and I told him he would have liked yours better!  I need to get back on track....was a big day today, as my first novel was published and there is a book event tomorrow.  I'll try and get better rest tonight. Good news on my starter, too.  The gluten-free conversion seems to be working well.  It is very active. I made some dough with the mixed starter (ww, rye, white) and then fed another bit of starter with all white flour, trying to replace the white flour one that died!  I don't want to speak too soon, but it is looking good.  Hopefully, I can spend more time on the site when things slow down.  I miss my TFL fix....Best, Phyllis

Hopefully it isn't about a baker who hates his customers and is a serial killer that tracks them down:-)  That plot would only make for a good movie:-)

dabrownman:  I've got a long list of projects I would like to do.  Perhaps I can put that in the queue, but I am not sure serial killers are my forte...I like the baking part, though!  Best, Phyllis

Wow!  That must be so exciting have your first novel published.  Please share with us the title if you don't mind.

On the baking front, I'm sure you will get your starter back up and running.  If not, I'm sure someone on TFL who is in your neck of the woods would be glad to share some of theirs.  I'm in NY so I'm a bit far :).

Here's the update on the starter.  I did take one of my gluten-free starters and converted it using, ww, rye and white flour.  It took off like a charm.  I also took some of the gluten-free starter and added only white flour to replace that other one that died.  I used the combo starter to make some dough yesterday and did a bulk retard last night.  I just shaped it into a boule to bake later today, and it seems good so far.  Fingers crossed.  I have a busy day with a book launch event tonight, so I am trying to figure out when to bake it!  I also have some starter in the Midwest that my sister is supposed to feed.  I reminded her to do it after I found my California starter gone.  So, I can always bring a bit back, as I have a book event there as well.  I just label it "sourdough starter," but the TSA usually opens up my bag when I transporting starter across state or international borders!  And, as a last resort, I shared some of mine with my friend who lives close by and I can always ask her for a bit back!  There are many ways to make this work.  Here is a link to my web site about the book. I chose to write an "easy" read to start.....http://phyllispiano.com  Thanks for your advice and concern about my starter and interest in my book. Best,  Phyllis

paper . let it dry and put it in a glass jar in a cool cupboard.  That will last for years.  Add a little water and poof you have another serial killer to worry about in 2 days:-) I don't do this though.  I can get a rye starter going in 4 days every time so, no worries about making a new one fast.  My starter roots date from fall 1973 though and I have tried every way I know to kill it off over the years but it just won't die no matter what.  Still it is only 26 generations old at best,  I'm sure it would survive a nuclear megaton blast from 5 feet away .......with the cockroaches no problem.

Happy baking Phyllis and I'm sire your fist loaf back will be stellar or at least we would have thought so!

I did exactly what you describe in England, but I never did it in California!  Clearly, I should have.  I think next time I go to England, I will try and activate the dried starter and see what happens.  I can't believe your starter goes back to 1973.  That is really impressive.  Mine was created in 2012, so my starter is  a baby compared to yours!  I did bake the loaf today, and my husband said it was very good.  I used the converted gluten-free starter. (photo below).  I am back in business!  Best, Phyllis 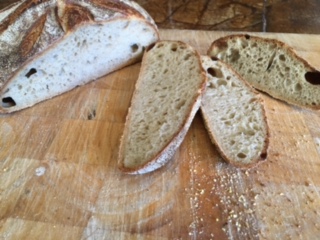 Your book sounds like a great read and your reviewers seem to love it.  Congrats and good luck on some big sales!

from 'Sourdough Bloat' at  the end of the book:-(

Don't laugh.  I have brought homemade sourdough to two book events and will try again tonight!  Molly can eat the sourdough, but I can't.  It's torture!  Best,  Phyllis

Fingers crossed!  I have a book event tonight...Best,  Phyllis