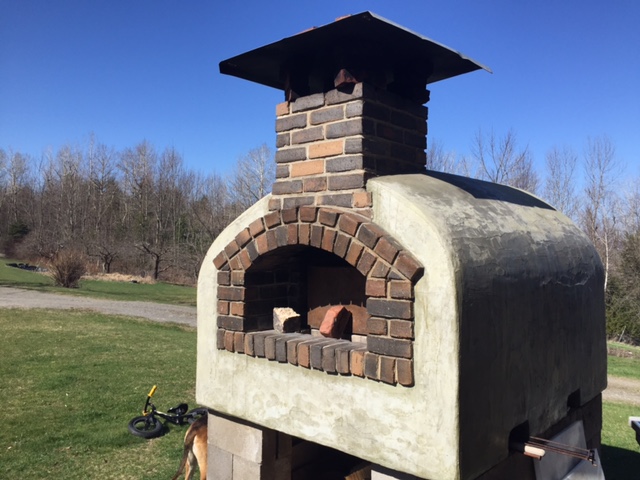 My father-in-law has a brick oven built using Alan Scott's "The Bread Loaf" for design inspiration.  It is a large brick and masonry oven that will take quite a bit to move.  Heats up very well, and can fit several pizzas at once, and probably a dozen loaves.  It's more oven than they need!

The deal is, he wants it off his patio so that he can build an addition to his house. He figures, why move it twice!  He wanted to build a dome style pizza oven instead, so he built that and would like to use that instead.

Any ideas as to who may buy such a thing are also appreciated!  Email Jen at jenhallie@gmail.com

takers with that zip code.

Lovely looking oven, looks like it could easily be lifted with a crane.  :)

Ha!  Thanks for the response. Both answers are true.

But hey, we get to live in VT!  And have friends with cranes!

Just "up the road a piece" in the great state of Vermont is the King Arthur Flour company.  Lots of folks come there for classes and baking supplies.  If their shop has a bulletin board, it might be a good place for advertising.   I have an outdoor oven and I live "up north" so I believe you will have lots of interest in New England.   Not just individuals who love to bake, but culinary schools, hotels, B&B's, restaurants, resorts, etc, may also have an interest in adding such an oven.  Great way to feed all your guests on a summer evening!   Good luck….I hope your oven finds a good home.   Embth

Boy, great point about KAF!  I was just there last week with my kids!  Also, the Montshire Museum of Science is nearby, and a great visit.

Thanks for the ideas!

Sorry, totally didn't get that!