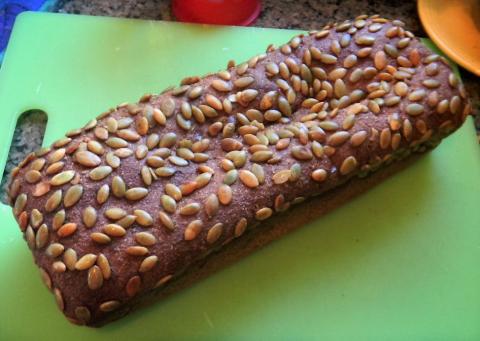 Lucy has been wanting to make this one since we ran across it while searching for pumpernickel bread recipes at about the same time another Fresh Loafian was asking about Latvian Bread recipes. 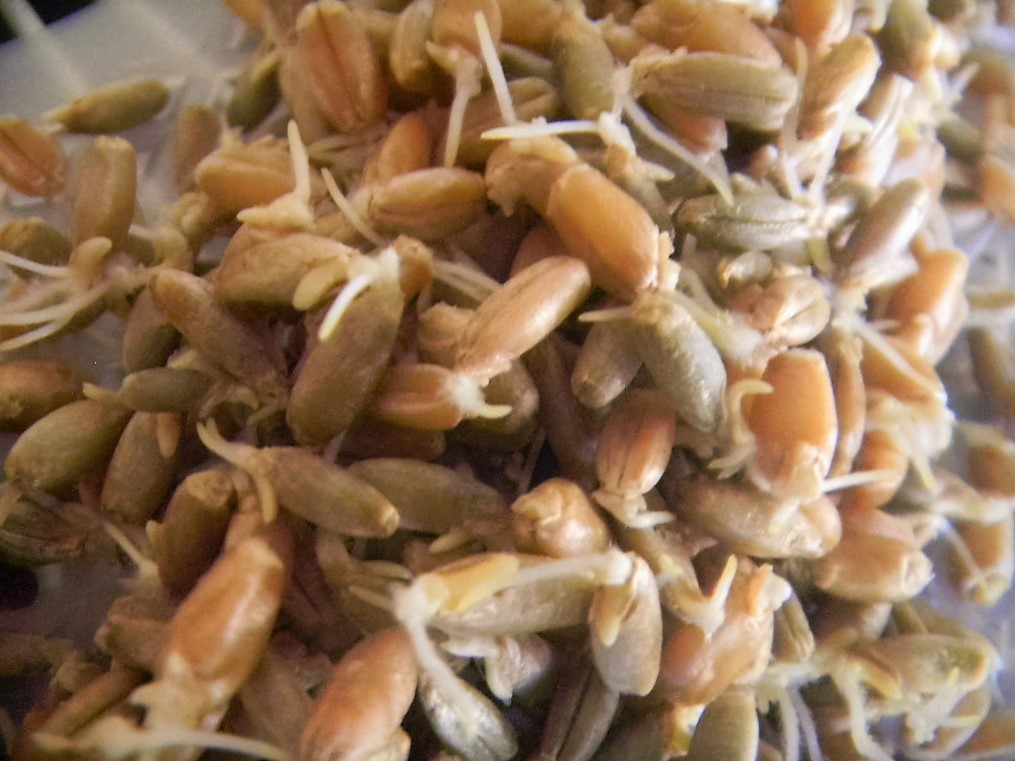 We thought it an odd one since the recipe called for scalding apple cider and then adding it rye four with a bit of starter and leaving it covered to make the for 24 hours to make the levain. 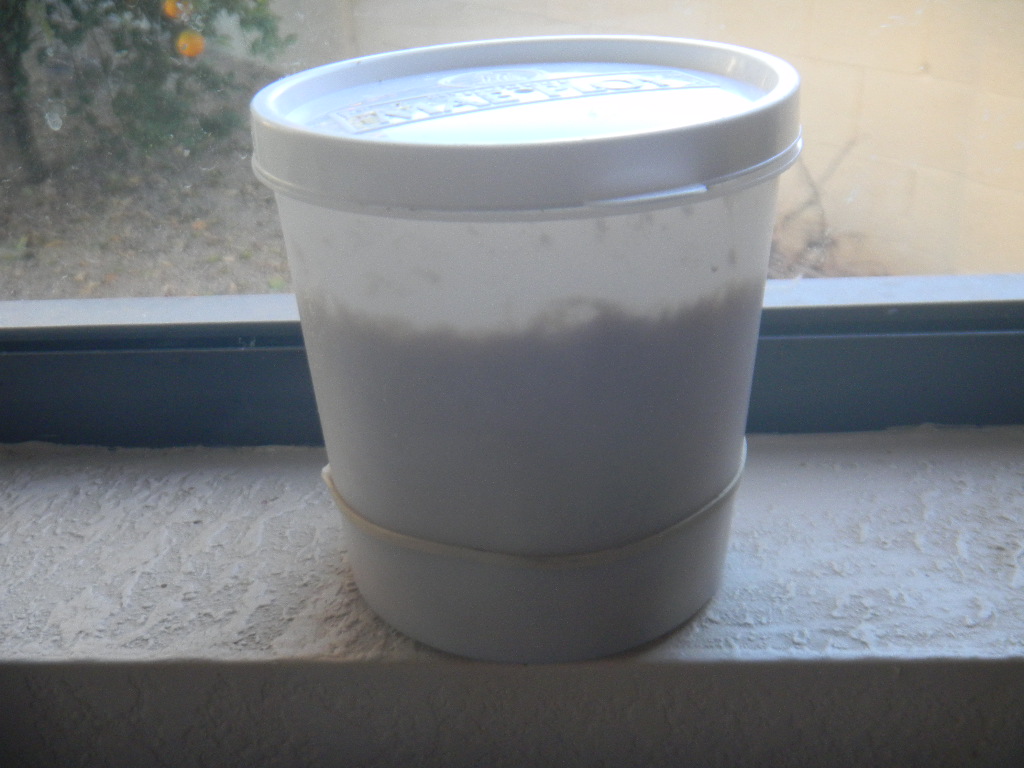 We don’t really make levain for these kinds of breads anymore and would rather just make a new starter and levain from scratch instead since it is so much fun.  We did our usual 4 feedings of 30 g of whole ground rye and 24 g of water every 24 hour for 4 days throwing half away after 48 hours and right before feeding number 3.  It got down to 32F last night so the heating pad was in order. 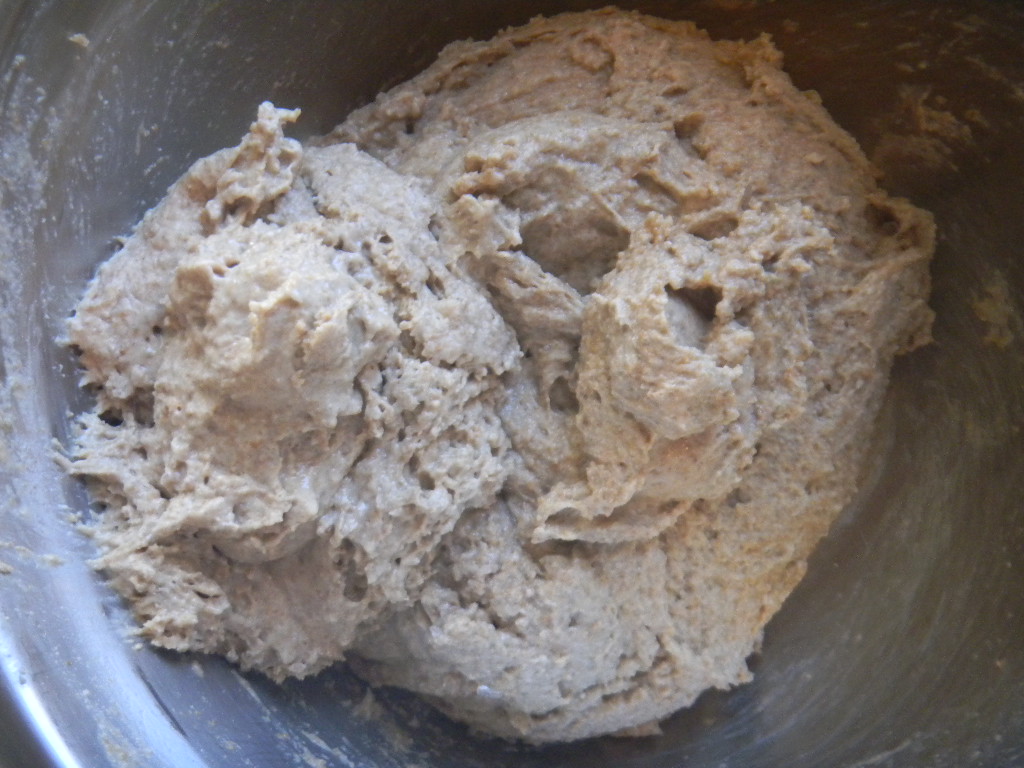 We didn’t really throw half away but fed it white flour for 2 days instead to make a white starter to use for something like biscuits this weekend.  Like usual, the starter was ready to go after 4 days, doubling after 48, 72 and 96 hours. By 98 hours it had tripled, so we retarded it in the fridge for 16 hours.  We did pinch off a bit to feed to our stored starter to refresh it and keep it on its toes.  We did use apple cider for the dough liquid. 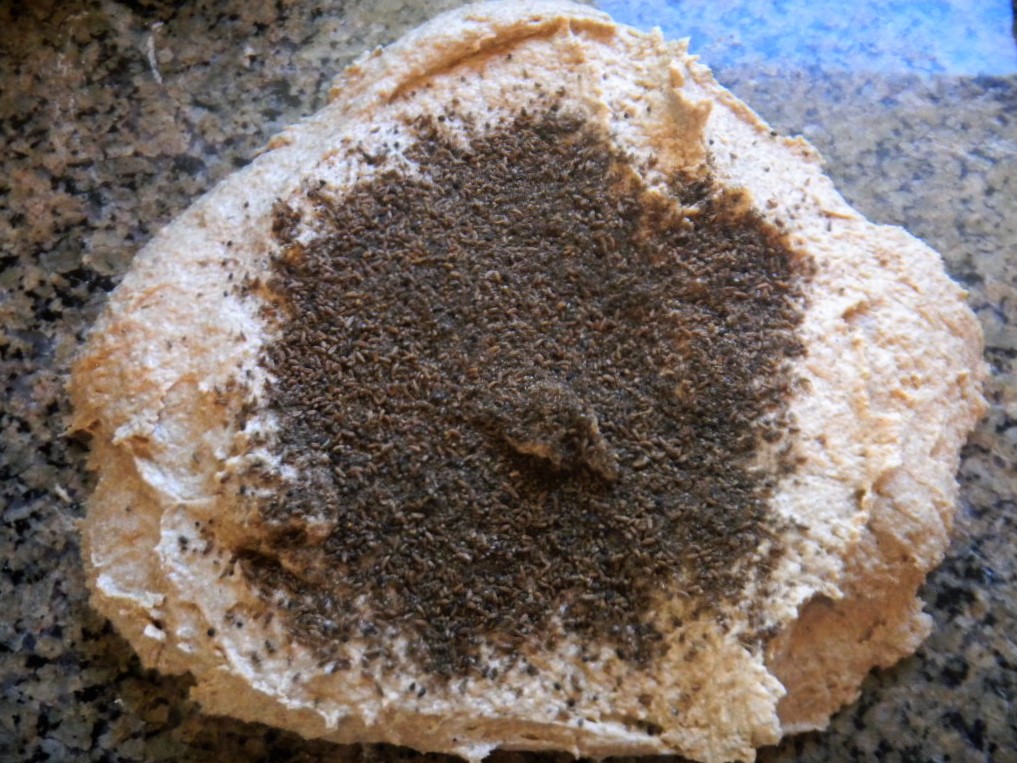 We brought the apple cider to a boil and autolyzed the dough flour with it for an hour with the pink Himalayan sea salt sprinkled on top.  We mixed in the levain and did 3 sets of 30 slap and folds to develop the gluten for the 40% of the flour that was whole wheat.  The Caraway seeds were added in during the first of 3 sets of 4 stretch and folds.  All gluten development was done on 12 minute intervals. 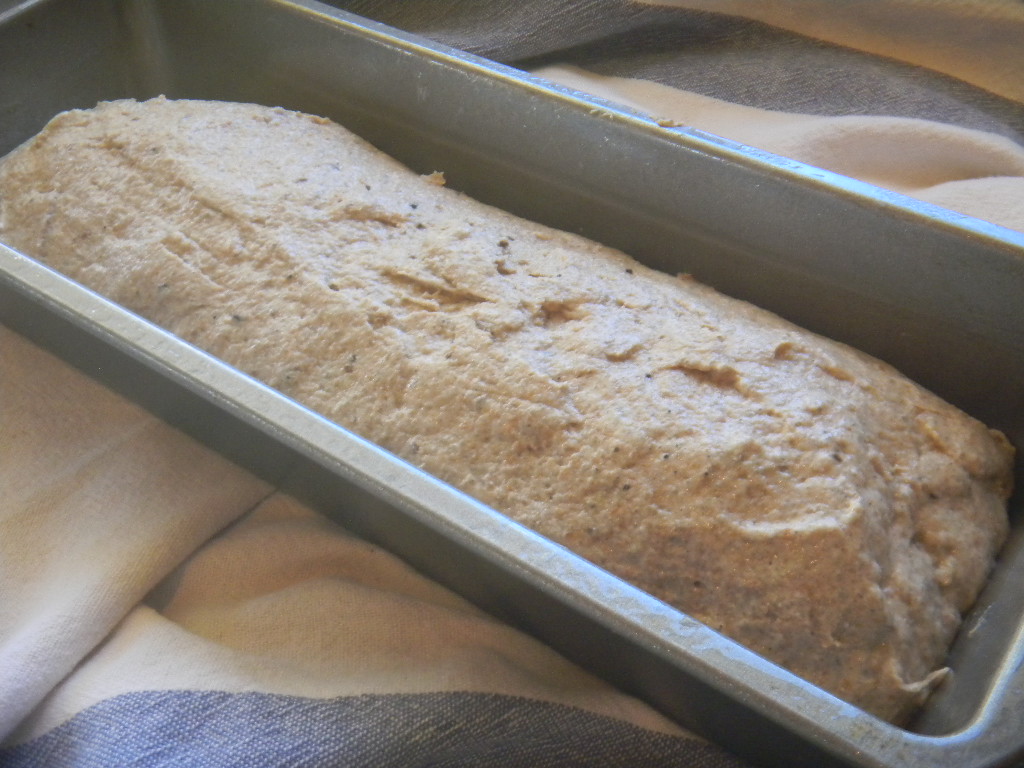 Normally, the wheat in this recipe would be bread flour per the long dead Lativian Bread bakers that Lucy channeled with her Latvian Baker Channeling app but we decided to bake this bread using whole wheat.  Lucy thought the whole wheat would be more old school and there is nothing wrong with 100 % whole grain bread in my book anyway. 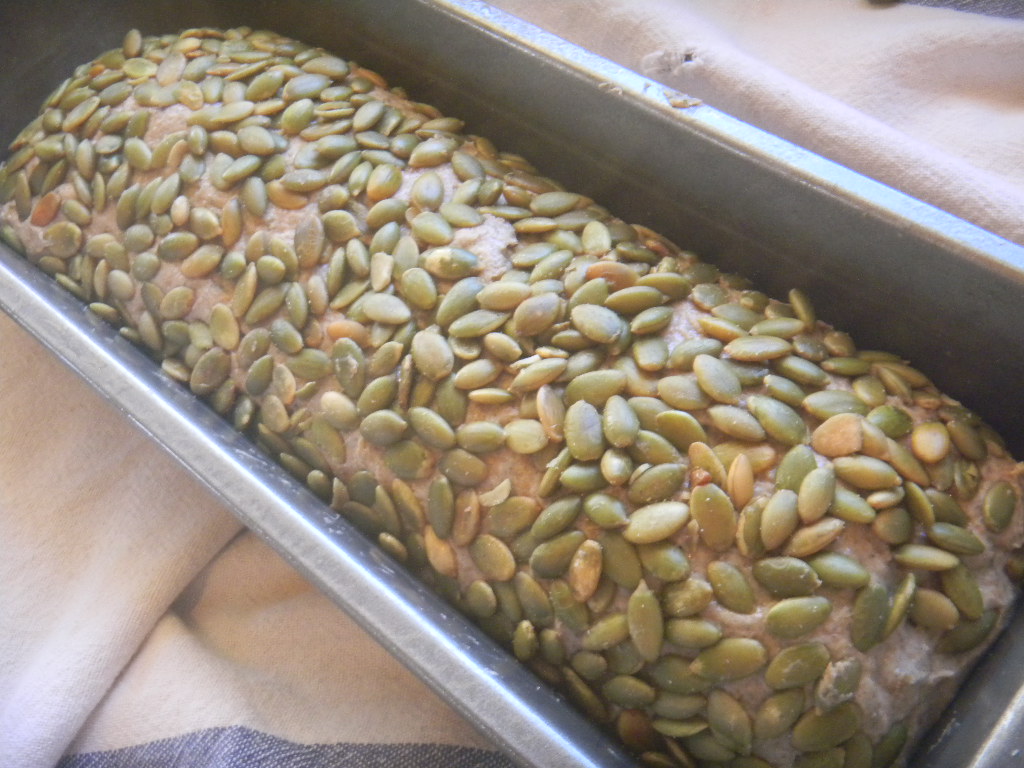 All the flour was ground medium texture instead of fine to closer fit the Latvian flour that would have been used long ago.  The regular recipe would have quite a bit of commercial yeast mixed in with the dough four and we omitted that too – there is nothing old school about commercial yeast. 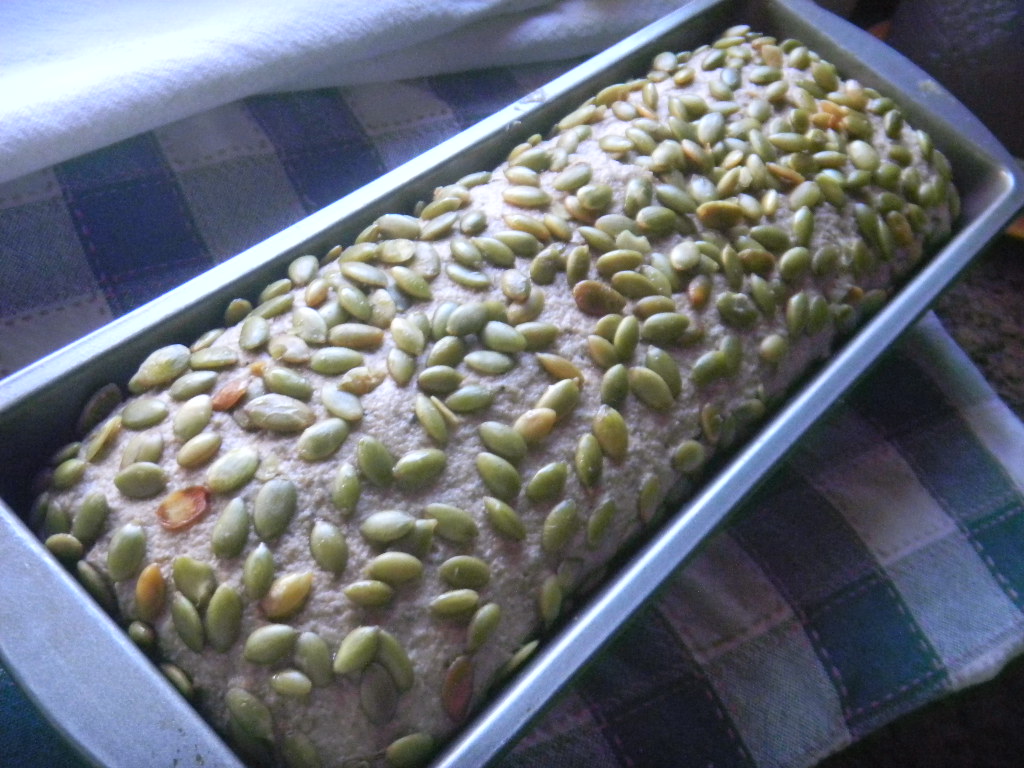 Once gluten development was finished, if you could call it that, we let the dough sit around in the bowl on the heating pad for half an hour before shaping, plopping the dough in a long tall Pullman tin, mounding it in the middle and covering with some squash seeds for a good looking final proof.  Once it had cracked, it was ready for the heat. 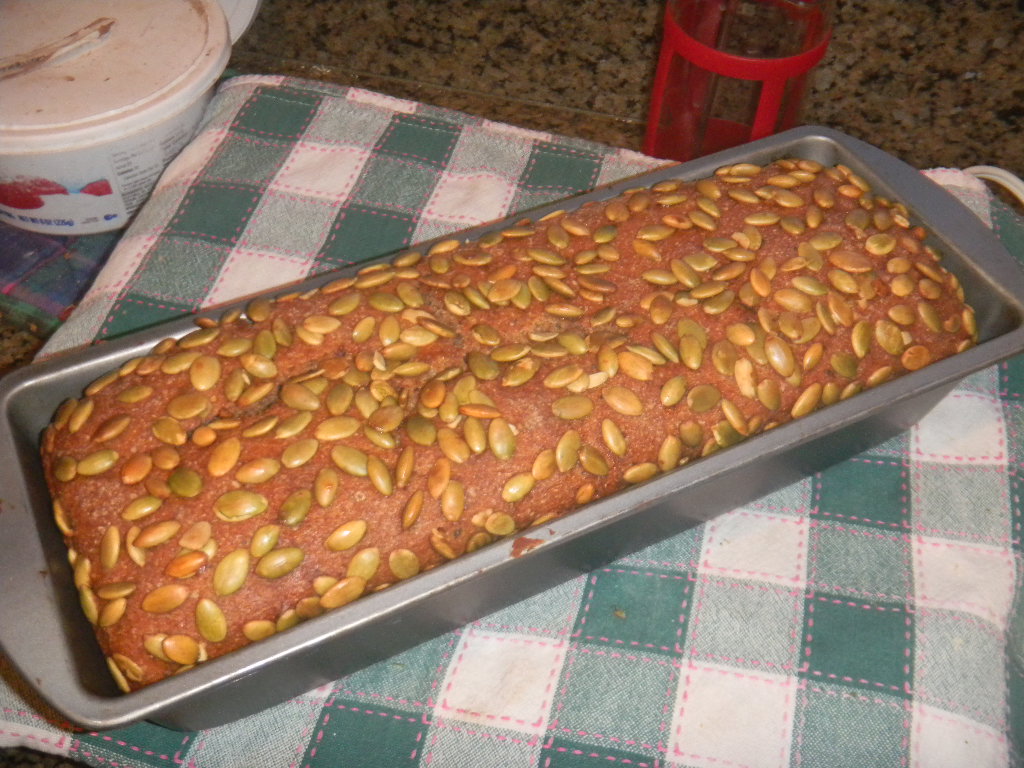 At the last minute, we decided to bake it the traditional way at 400 F for 15 minutes with steam and then at 350 F for an hour.  Lucy was disappointed but there just weren’t enough hours in this day to get it done low and slow pumpernickel style.  That will leave another bake for later that will be low and slow and include prunes, walnuts and pepita 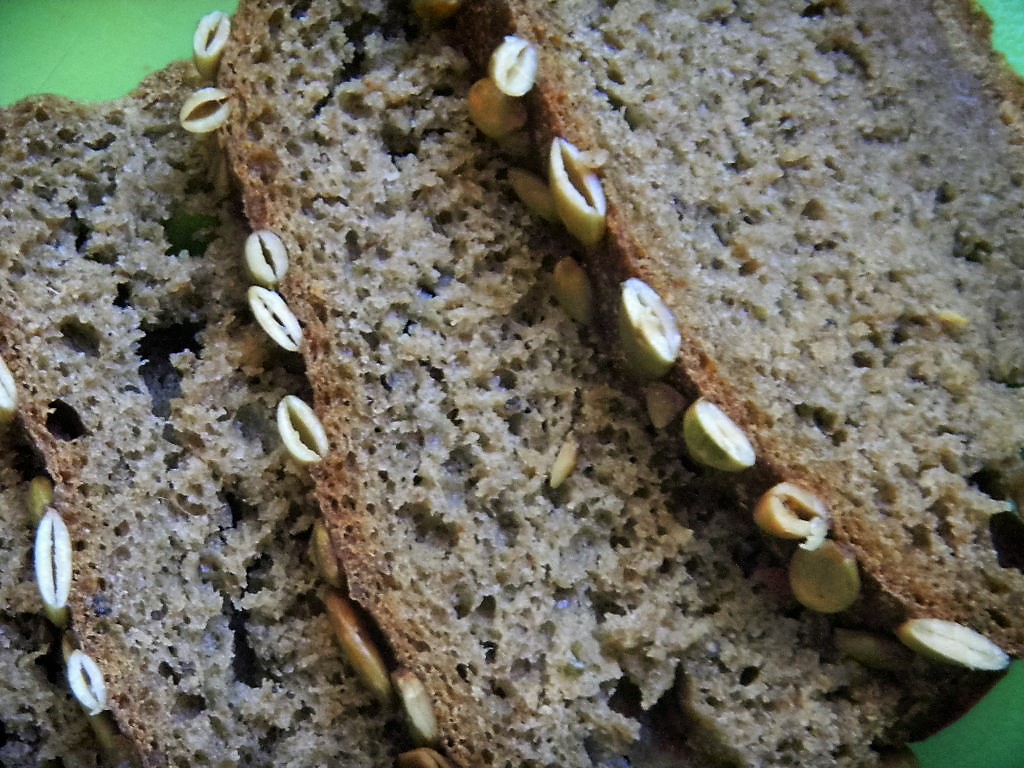 We then took the bread out of the tin and let them dry out for an hour on the oven rack for 10 minutes with the oven off.  The bread came out nicely cracked and smelling terrific.  We wrapped it up when it cooled and will let it sit for 24 hours to redistribute the moisture and soften the crust.  I was disappointed that the loaf had collapsed in in the center showing that it was over proofed.  It also was not quite done even though I had baked it for another 10 minutes - 70 minutes at 350 F.  The bottom of the loaf was also dense.  So that was 3 strikes for the crumb.  The good thing is it tasted great.  A very different taste for a bread like this one.  I like it even though it turned out ugly.  Next time we will do better and there will be a next time. 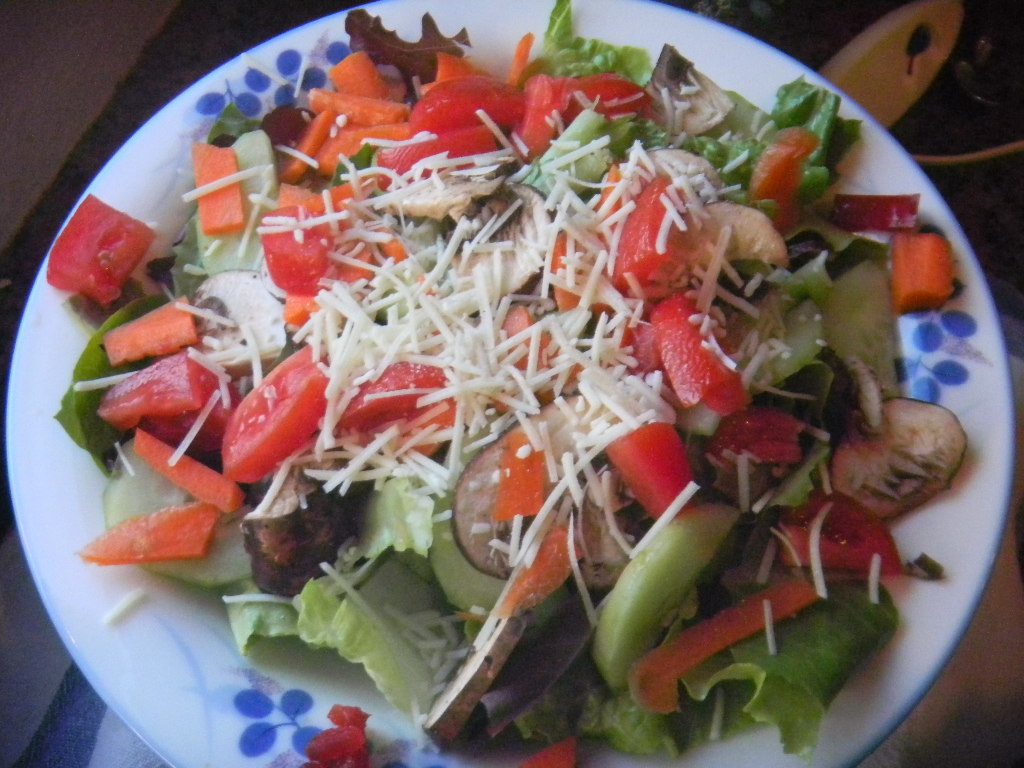 Interesting technique again. I'm excited for the crumb shot and flavor report! Thanks for sharing this beautiful loaf.

I do like the taste though.  Not like any other 60% rye for sure  You just can't over proof these kinds of breads and have it turn out well.

Looks absolutely delicious Dabrownman. Also looking forward to the crumb shot and taste report. All those different grains and cider. Must be a wonderful combination of flavours.

It was tasty when toasted with cream cheese and slice of Westphalian ham for breakfast.  Next time we won't over proof it, bake it pumpernickel style and maybe add some rehydrated minced onion.  Well of to white bread next week with the left over starter:-)

It's always worth experimenting!

How did you get your squash seeds to stick to the dough?

dabrownman
December 4, 2015 - 1:29pm
After I mounded the dough and sprinkled the

seeds on, I pressed them gently into the sticky dough with a spatula.  It seems anything will stick to a high percent rye:-)  I say of it tastes great he bake is a success so this one passes that test!

Loves those squash seeds.  What an interest in contrast they provide.  Your crust and crumb look spot on and I'm sure this one tasted as good as it looks.

I've been super busy traveling and getting ready for a big sales meeting in January and finally had a chance to post something.  I hope to post the breads I made over Turkey day soon as I was very happy with how one of them came out.  Just refreshed the starter so I can mix something up this weekend.

Hi to Lucy from the LI gang.

Watson make a 2 on a par 4 from the fairway in the Bahamas to go 3 up on Jordan Spieth.  That shot was a lot better than this bread which was massively over proofed.

The market was acting weird on Thursday after the Islamic terrorist attack in San Bernardino so I couldn't get back to the kitchen to look and see what this dough was doing on the heating pad.  It didn't do anything for 2 hours and then doubled in the next 2 hours:-)

Oh well, making money always comes before bread ....even really good ones like this one.  Where is the high maintenance apprentice when you really need her anyway:-)

Will look fort you post on recent bakes.  We had a great time in Texas with the in laws and our daughter.  They loved the World Bread Day Pumpernickel and the hazelnut SD bread.   My daughter has a friend from PA school who loves SD baking and she made a WW bread that I got to try - very good.  It is fun to see the young ones carrying on making good bread.

Lucy sends her best from the doghouse to her East Coast buddies and hopes thay don't freeze to death before Hanukkah.

Much too close to doubling in the pan rise.  Aside from the dent, it does look very good.  Large seeds make it difficult to see if there are any bubbles breaking the surface but the seeds are well worth it.  So tasty!

You can take the bottom section, nuke to bake thru, cool, crumble and splash some more "rye" on it and  work in some toasted nuts and/or cream cheese, make bite size balls.  Roll into cocoa and you've got whiskey balls for dessert!  :)

Never let a trick go by!

covered rye for the inspiration for the pepitas on this one.  I don't often put seed on the outside of breads because they tend to burn but for these breads they are just right at the lower temperatures.

I was going to put it the heat at 50% proof since it was 40% whole wheat, but it really took off after hour 2 and got away from me pretty fast.  Next thing I knew it was at the dreaded 'total toast' stage'.  I think the sugar in the apple cider also sped things along much faster than normal - as did the heating pad.  That's my story and I'm sticking to it:-)  The apple cider gives this bread a different taste from the typical rye too.  It is very good otherwise if you overlook the proofing.  It is fun to make the starter from scratch too.

Love the bite size, Rye on Rye Balls idea but will have to make them, Bourbon Balls to help the alliteration as well as, the personal taste and current liquor availability!

I could almost smell it from those photos, it looks great.

I have a slightly tangential question for you, since you have often used sprouted grains in bread.  Sprouting grains must have some enzymes in them, since it is how malts are made.  And they are not baked prior to making the dough, so it seems safe to assume the enzymes are still active.  How do these affect the fermentation?  Thanks.