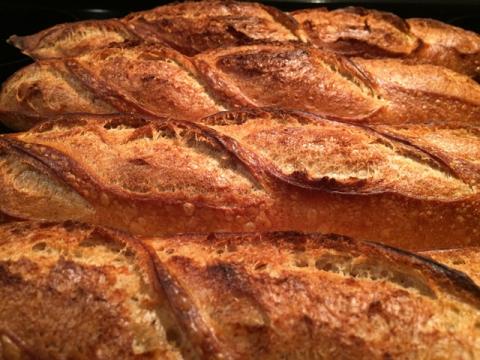 Continuing on my quest to reverse boule and batard formulae to baguettes, here is my take on Ken's Artisan Bakery's country blonde.  But instead of as boules or batards, which is what he sells them as, I fashioned them into baguettes (and a batard).

Almost, but not quite as compliant as my take on the Hamelman WW levain baguettes and batards, it falls short on both looks and shaping.  But only by a few fat hairs.  The Hamelman's have an incredible delicate finish to them.

Once more, I am on a mission, albeit not much of one at that, to convince the Dutch Oven and banneton bound masses out there, to take a few bakes and shape some batards and baguettes and retard/proof them with a linen couche.  Perhaps frustrating at first, but in the long run, you'll be glad you did.  Or - be cursing me...

The batard (as if I had to tell you!) 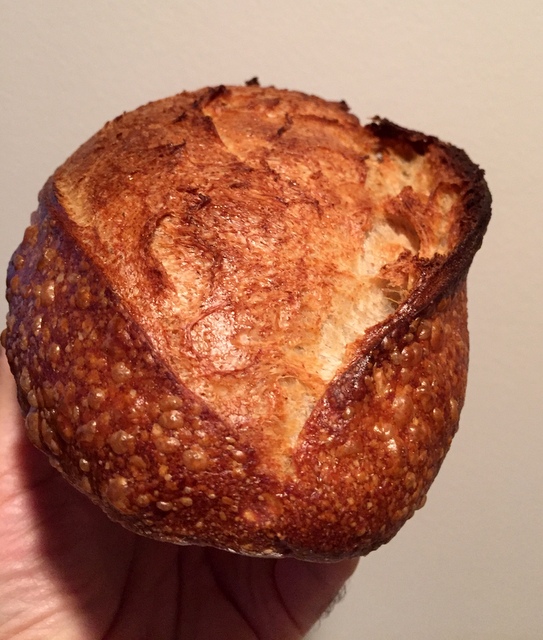 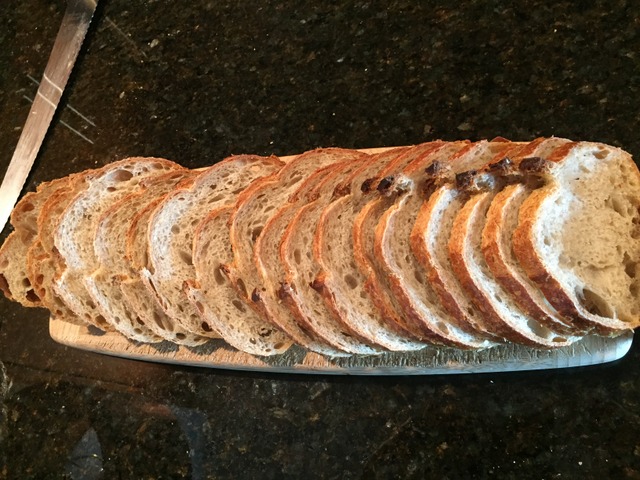 The baguettes (as if I had to tell you!) 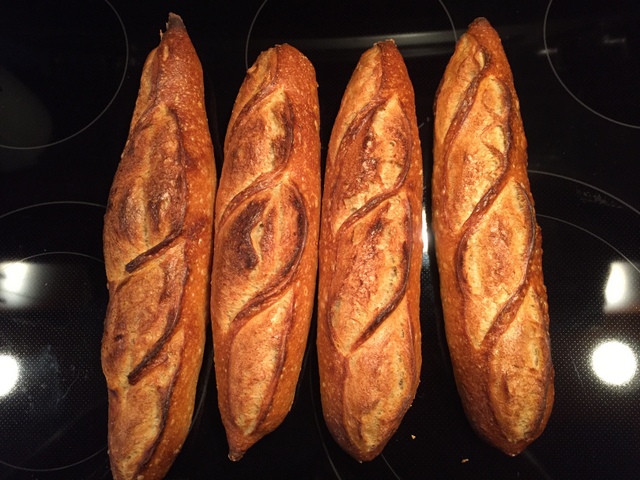 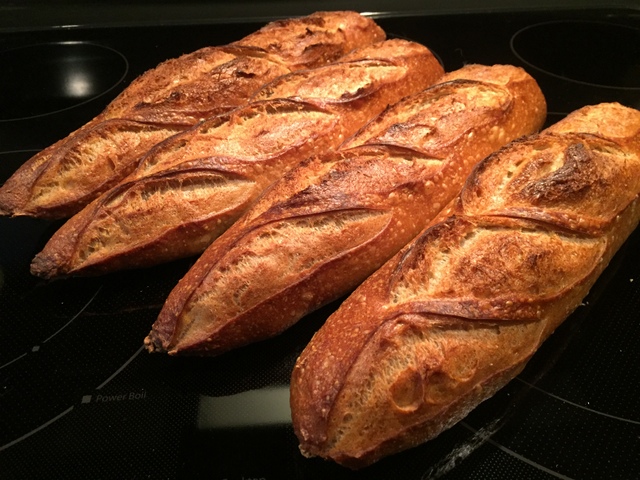 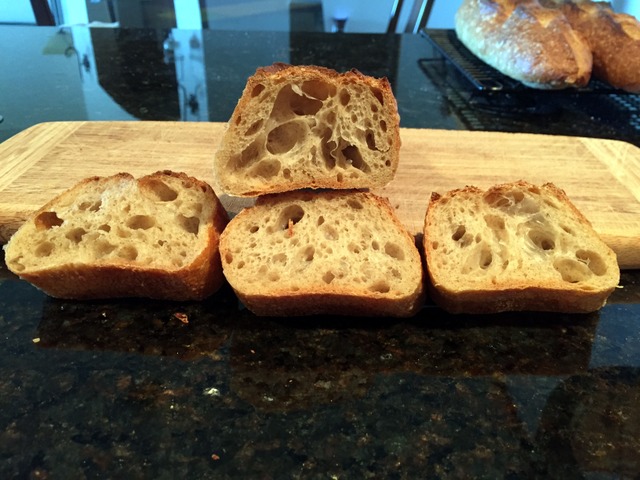 looking very much like those I'd usually get in in a boulangerie in France. You did it again Alan.....well done!

Wished I could taste some.....

When I lived up the block from Ken's, (why did I ever leave???), this Country Blonde batard quickly became my favorite bread there.  Differing by a few minor degrees from that in his FWSY book, and under Omertà agreement, I was privy to this formula.  I converted it to home baking steps when I decided to bake it for the first time a few months ago.  His batards are ~750g of dough with three scores across the top surface.  Mine are a little under 500g.  But baguettes (these are ~300g each) are so much fun.  In truth, they and batards are all satisfying to the brain, the eye and the stomach!

pumpernickels into a great looking baguette.  You could call it a bagnickel or a pumperette.  Well done and

so many decades ago, I would have called them NickelBags :-0 .

I'd like to see Lucy try rolling a baguette.  She's all talk, no action in my book.  She's likely the same as my Castagna.  Quick to show up for handouts, but abandons the ship when the going gets rough.

Nothing new there. But, unless I missed it, you have neglected to tell us whether there was any notable difference in the eating of the two shapes?

I would also note that Ken (like most traditional professional bakers) is big on one dough/many uses.  He mentions several uses for a number of his formulas, including baguettes and focaccie.

As I'm an aficionado of crust, and the shaping and scoring of baguettes is more rewarding and fun to me, I generally lean toward the bags.  Taste-wise I like them fresh more because there's more crust per square inch.  As far as toast goes, of which I love love love, the batard is superior to me because there is more crumb to toast.  Go figure...

We discovered Ken's within a day or two of moving to Portland, tired of unpacking and just looking to get in out of the rain (RAIN!) while driving around the immediate neighborhood looking for lunch.  Not immediately aware that he was just down the hill a few blocks from us.  I ordered soup and some of his bread was served with it.  And at that first chew I realized that "Louis, this the beginning of a beautiful friendship".

I'll never be as creative or as adventurous as folks like you or dabrownman, but at least I'm fairly certain that I can get some good consistency and results on a pretty regular basis from what I do make.

I just posted my latest which you may find interesting.  By no means as pretty as yours but very tasty and a perfect crumb if I do say so myself :).

How big is your final length for your baguettes?  I don't make them often enough but the last few times I made them too long and thin and couldn't fit them on my peel. By the time I got them into the oven they ended up deformed.

My bags range in length about a half inch ether way from 12".  That is based in the depth of my tile baking deck not being able to accommodate anything longer than ~14".  Which works out just fine because the cookie sheet that I use as an oven peel seems designed for just that length.  And yes, I initially ha the same problem about length and them overhanging the baking deck resulting in one end having a Jimmy Durante schnoz, something that would have appealed to Mrs. Calabash!

Your batards have a lovely open crumb and shape.  The SJSD basis for dough is so easy to work with.  As with you, I don't use David's 100% liquid levain, relying on my workmanlike 75% instead.  And also like you, adding a few grams of water to compensate for that difference.

If you are interested in looking for perhaps a different way to shape the batard, and I don't know how you currently do it, you can look at Martin Philip's method from the KA shaping video starting at ~6:27.  This is what I use and it gives some wonderful shape and surface tension to the loaf.  If this is something that interests you, we can get into further discussion about it and the scoring.

See - even a former Bronx boy is willing to support a former Brooklynite without the use of brass knuckles or a shiv!

Thanks Alan.  I will check out the video and see if it differs much from my current method.  Will certainly take you up on your on your offer if need be.