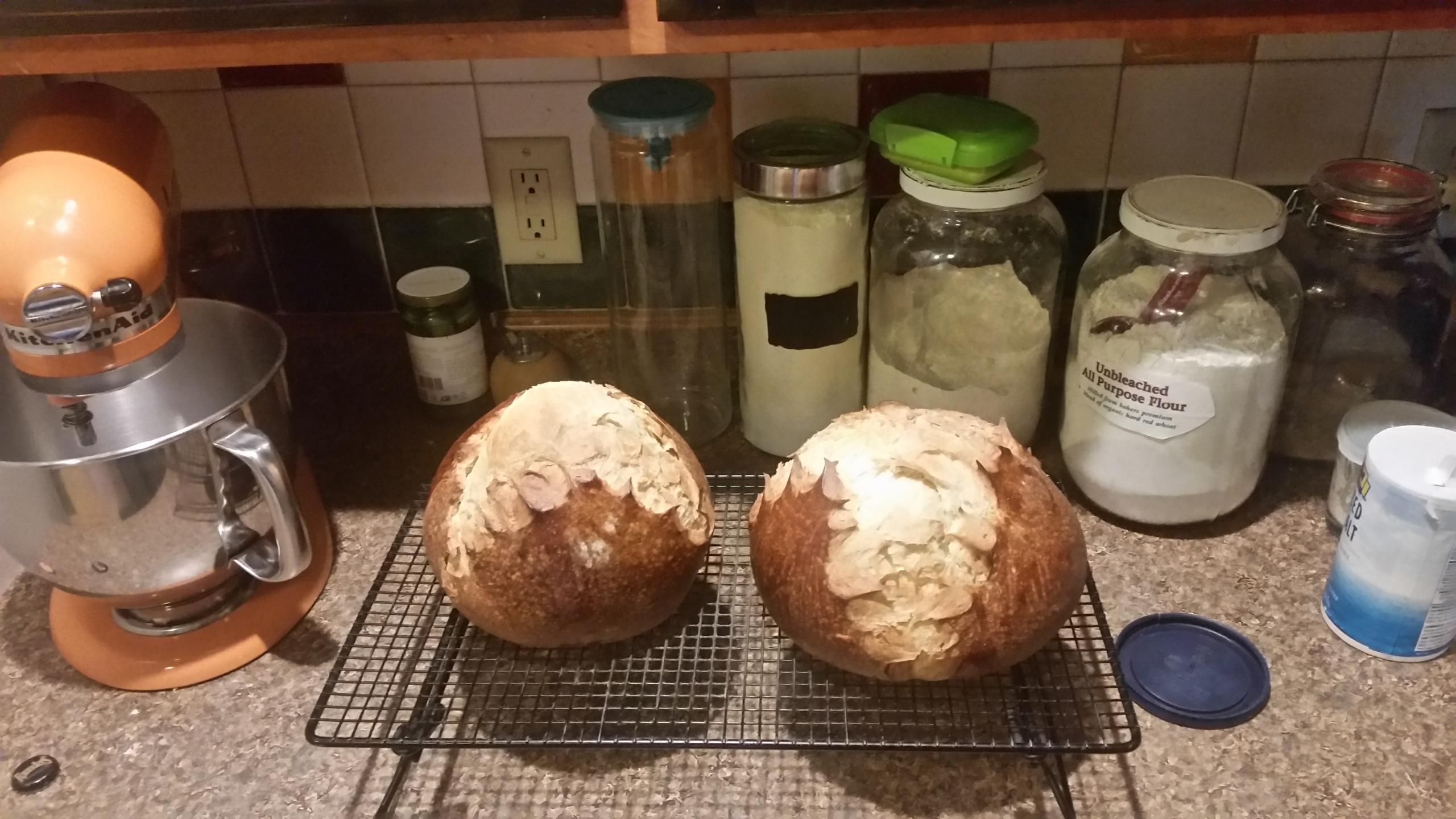 We had an Italian conductor from Trieste stay at our place for a week when he was visiting for a music festival.  He wanted to bring us a something from Italy so we asked for some traditional breads from Trieste. One was a Pinza – a sweet bread with 10% butter, lots of sugar, and rum. I finally got around to making it myself this weekend.  I adapted it to include some levain and used Grand Marnier instead of rum because we had it around.

Have not tried it but looks and smells good. Directions were not clear on proofing(actually did not mention proofing after shaping at all). The cuts seem too distinct but looks good if not quite correct in any case..

Let it ferment for 4 hours. The house was cold 70 F and it did not pass a float test. I put it in a warmed oven for another hour but still did not float but used it any way.

Water enough to make a stiff dough with levain, flour, and eggs.

I had to add water hear to get the extra 250 g flour to mix. I did not measure. After I had a fairly smooth dough I added the sugar, and then after it was absorbed the butter. Used a stand mixer and slowy added ingredients to let gluten develop . I put it in a warmed oven and it doubled in about an hour so it was ready for second mix (the recipe called for 3 hours).

All of primo impasto

Peel of 1 lemon and 1 orange

13 g salt (not included in the recipe but I added)

Again add ingredients slowly to make sure gluten develops. This was too much dough for my mixer so I had to split it in two.  This one took about two hours to double in size. Since I had already split the dough I just shaped each dough into a boule placed cut side down on a piece of parchment and put it in the fridge overnight.   I let it proof for 2 hours while heating oven.

Cut a zigzag Y with scissors and glaze with egg white.

panettone with starter and 2 dough builds eggs and sugar..  This has to be tasty!  Well done and

How is that achieved?

Sounds amazing.  Let us know how it tastes when you can.

The scoring was done with scissors cutting a zigzag in a Y shape starting at the very base. The images I found on line showed it opening a lot so I did not proof as long as for a normal loaf. My 9 year old shaped one and it had an inner fold poke through the cut a bit.

Tasted great. We made it for a brunch at a friend"s house and their 8 year old would not eat anything else. It's a bit denser than a panetonne.

would be a bit denser proofed and baked out of the paper mold too!

Community Bake - Baguettes by Alfanso
Finaly I think my pizza dough is perfect.
What does “ N°3” mean?
Hot weather troubleshooting
I revived a moldy starter - is it safe though?
END_OF_DOCUMENT_TOKEN_TO_BE_REPLACED