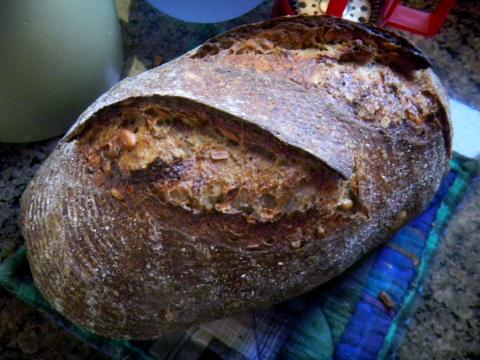 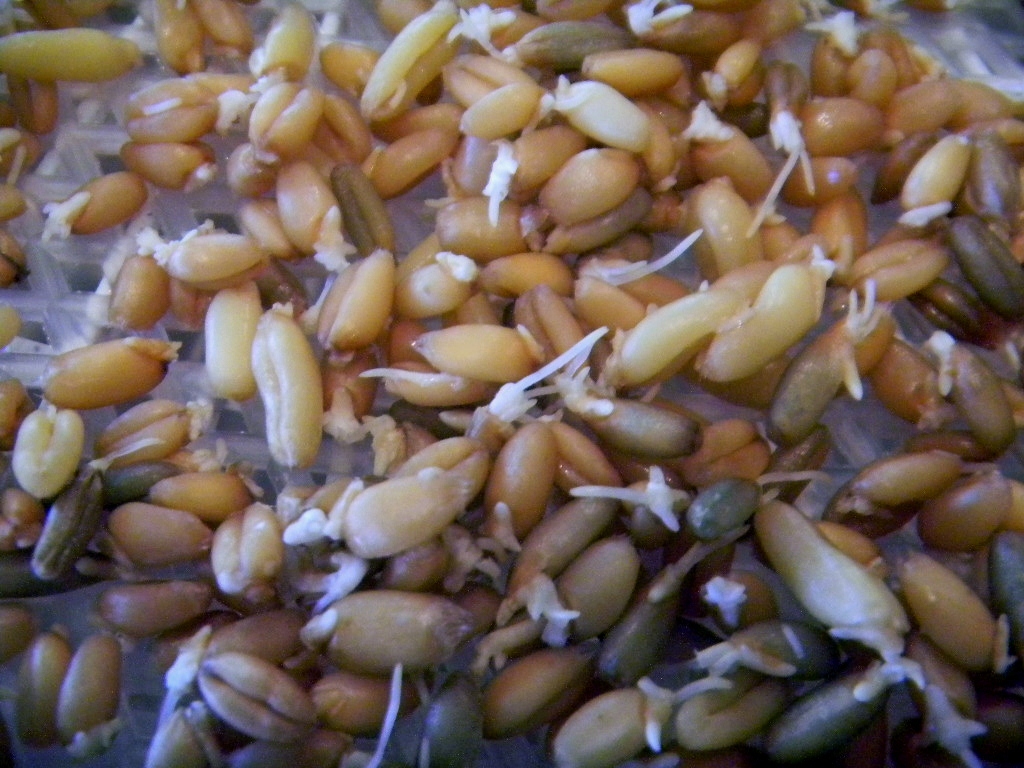 This exasperates Lucy to no end since she usually has free reign to come up with what ever suits her fancy but this week it can’t have figs, olives, cranberries or anything fruity in it.  This is fine with me since the last two week’s Friday bakes had all of those things in them.  Prior planning has its own rewards. 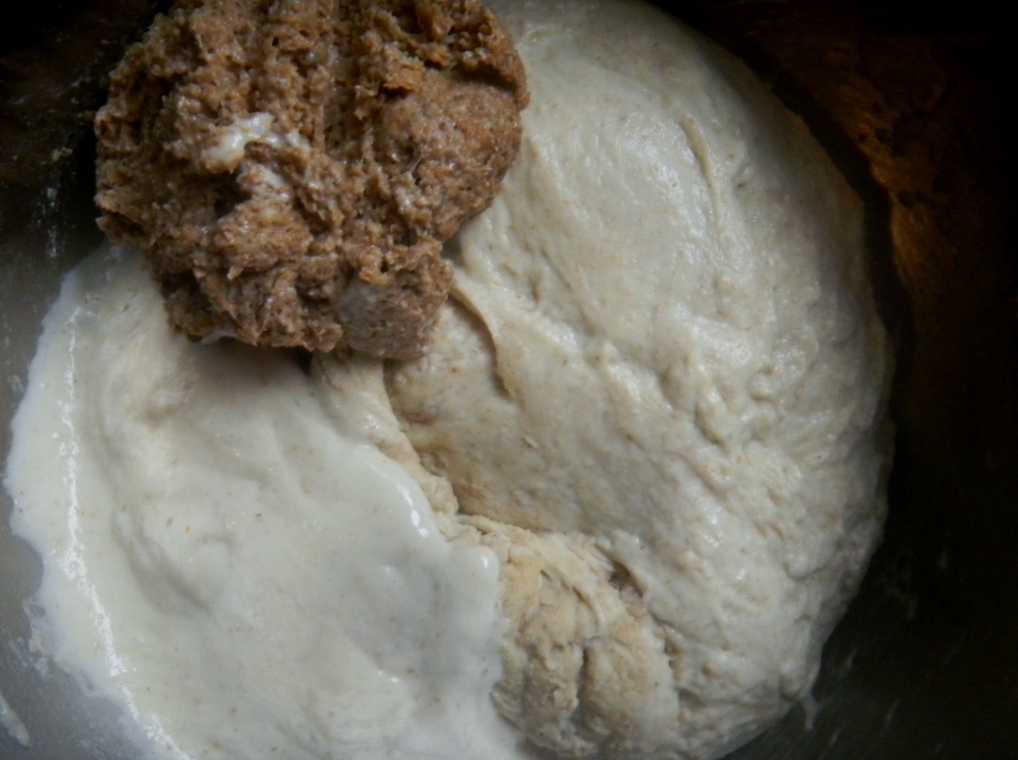 Seeds are still on the list and Lucy hasn’t done a seeded bread in some time and never a whitish one with sprouted multi-grain flour, 2 levains and potato water for the liquid.  So Lucy made this one with 30% whole sprouted grains of wheat, rye spelt and Kamut - our recent favorite blend of sprouts in various amounts of each. 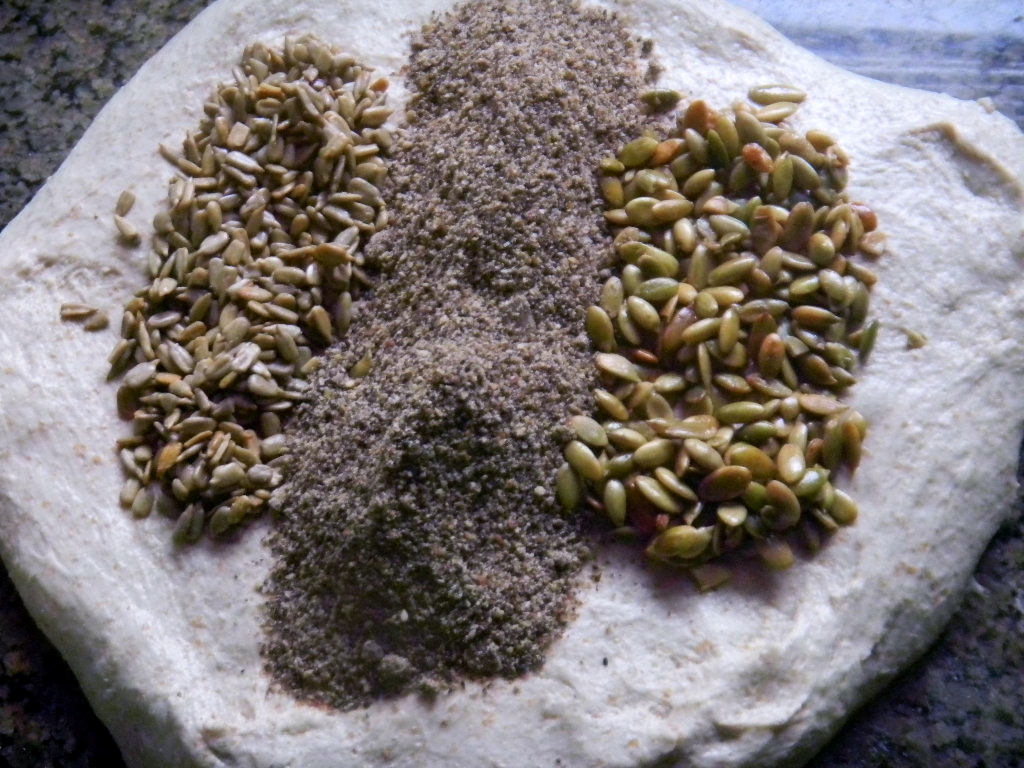 My daughter wanted to know if this concoction would turn out to be decent bread to eat since she hasn’t seen this bread in any store or bakery and being odd doesn’t mean it will be good.  That really ticked off Lucy who is more spunky since she started feeling better and sort of like asking Trump if he hates women more than being dead broke. 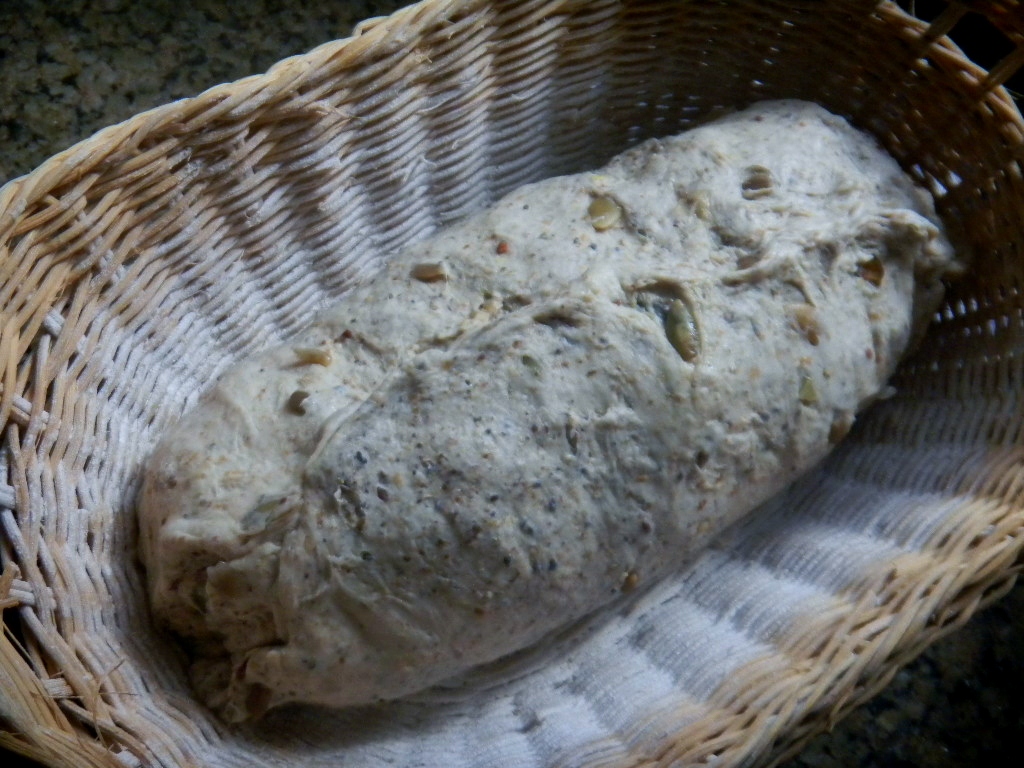 Lucy found 60 g of Flax, sesame, poppy and chia seeds which she ground up since flax seeds can’t be digested well otherwise.  The she found 75 G of pepetas and sunflower seeds.  The seeds came out to a bit more than 25% of the flour weight, 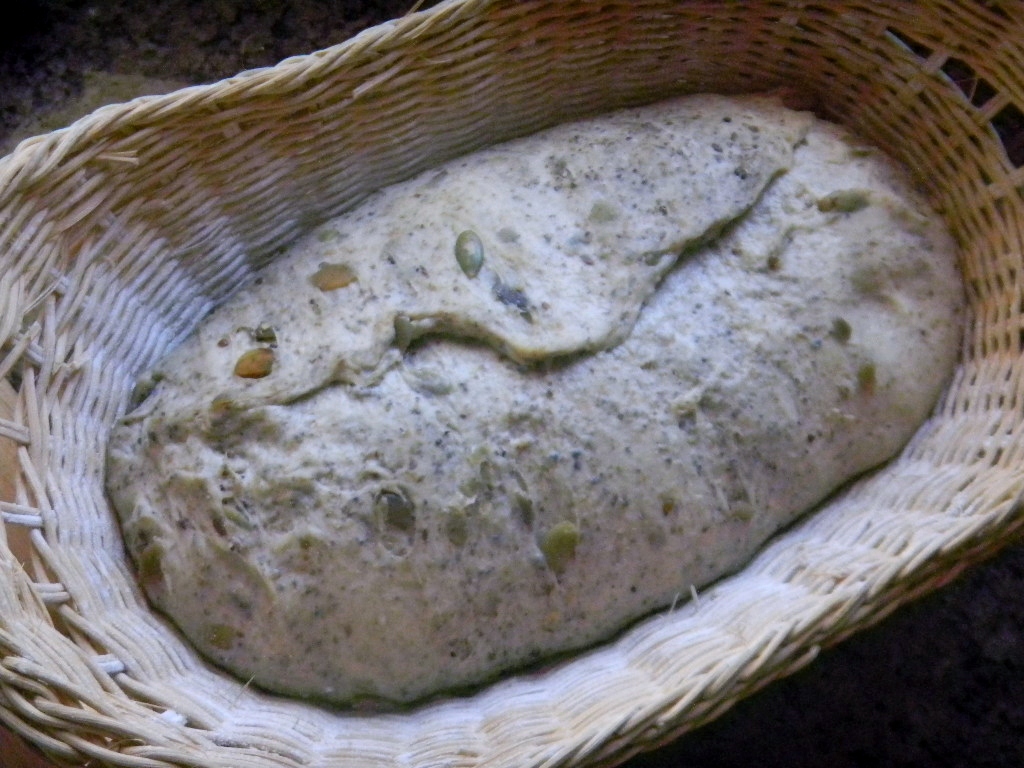 Lucy devised 2 levains for this bread.  One was a white one made from our retarded rye starter and AP flour and the other was made from the same starter but fed the sifted out hard bits of the sprouted whole grains making it dark.  Both were built over 3 stages over 10 hours and then retarded for 24 hours.  The white one came out sweet and fruity and dark one very sour and earthy 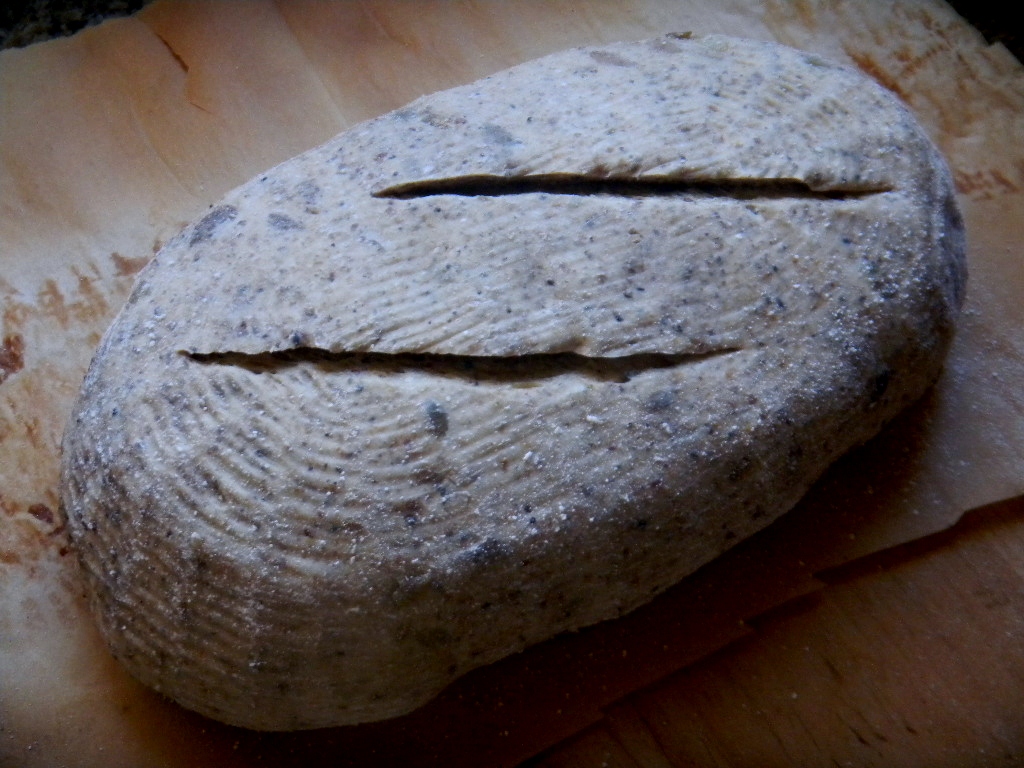 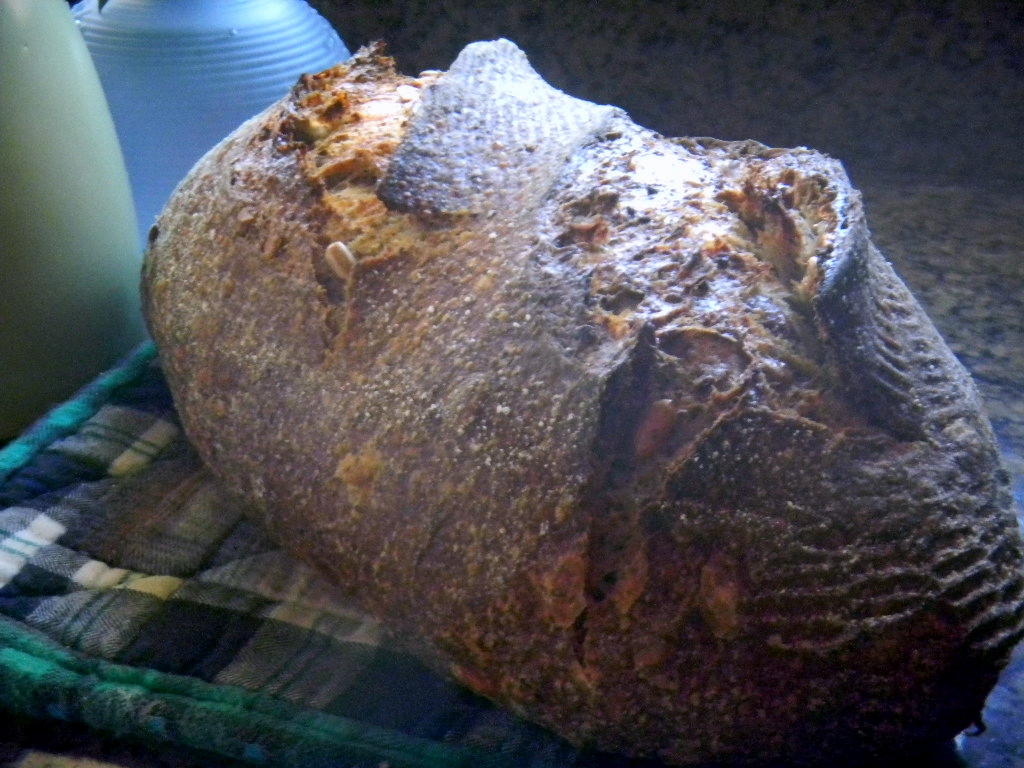 The dough felt about right hydration wise before the seeds went in on the first set of stretch and folds but tightened up afterwards.  We forgot to soak the ground seeds so they sucked some of the moisture out of the dough.  Next time we will soak them in 60 g of water for an hour. 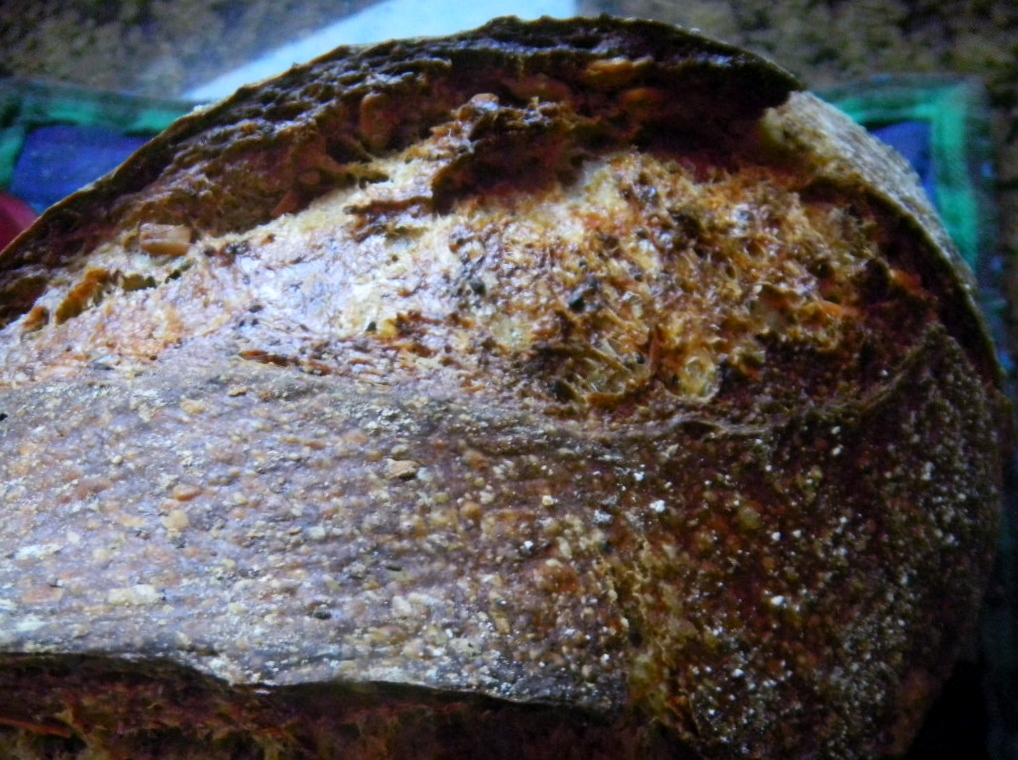 Once the gluten development was done we placed the dough in a an oiled bowl covered in plastic wrap and placed in the fridge for an 18 hour retard   When the dough came out it was gently pre-shaped into a boule and put back in the bowl for a 1 hour warm up on the counter.  The dough was then shaped into a batard because we are on a batard kick of late and let to final proof for about an hour outside in the + 100 F heat at the time,  Nothing like a hot proof to bring out the sour.. 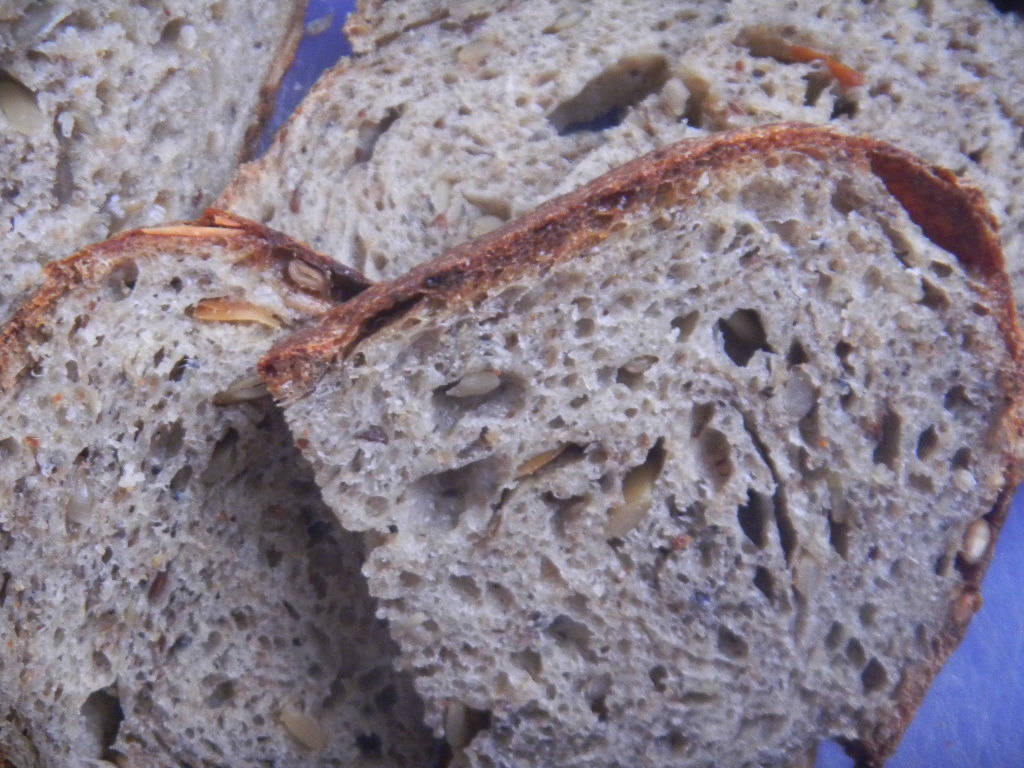 After slashing it went into the oven on the bottom stone and covered with the bottom of  a heavy aluminum turkey roaster.  After 20 minutes of steam the lid came off and the bread finished baking under convection to dry it out.  It browned, bloomed and sprang well enough but we will have to wait for lunch on the crumb shot. 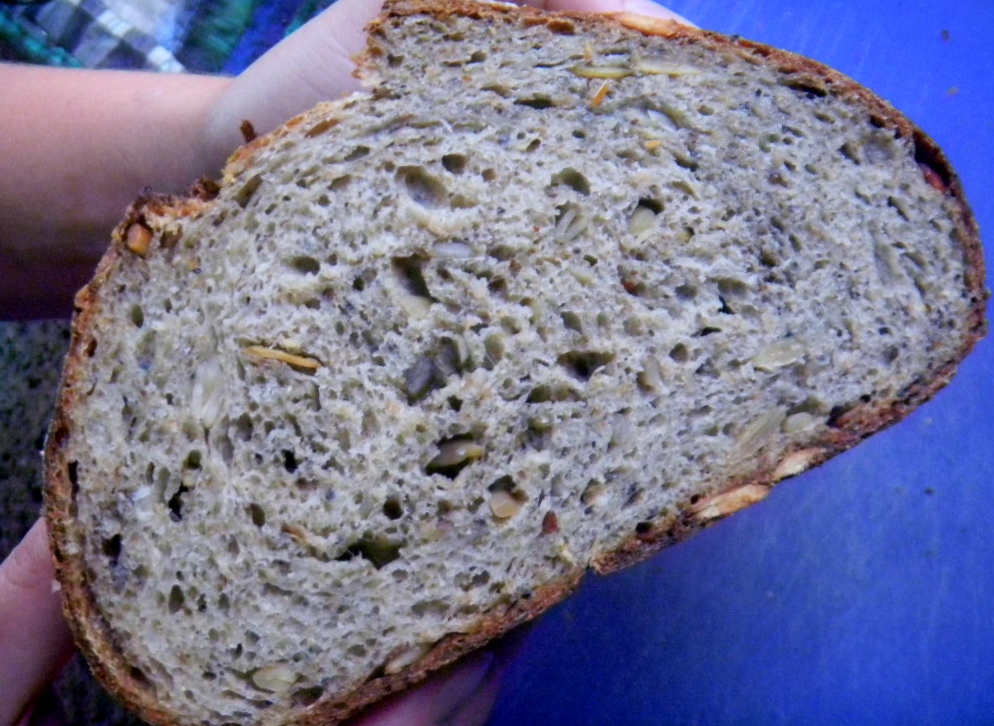 The crumb came out soft, moist, tangy and open enough for this kind of bread.  It tasted complex in an assertive, seedy kind of way you can only imagine if you don't make this bread 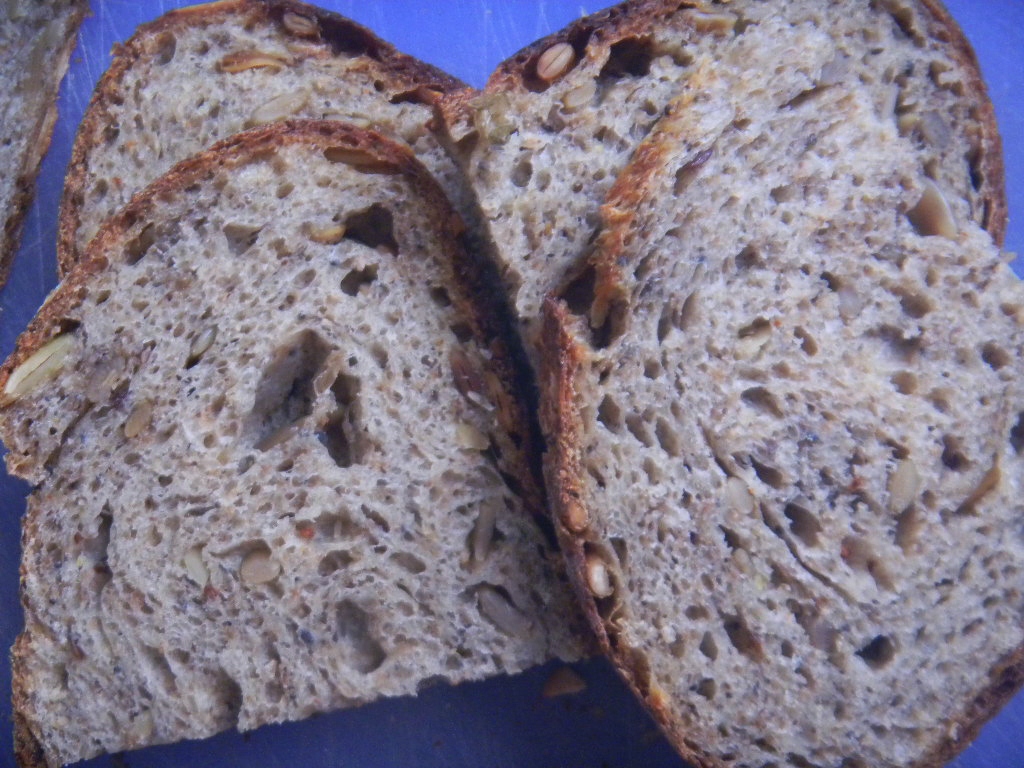 My daughter had the first slice and she liked it ....apparently not as much some other breads she has tasted over the years. Lucy says my daughter is an amateur critic, not to be trusted........ who doesn't like seedy bread as much as thought she would. Sadly, I have to agree with both of them:-) 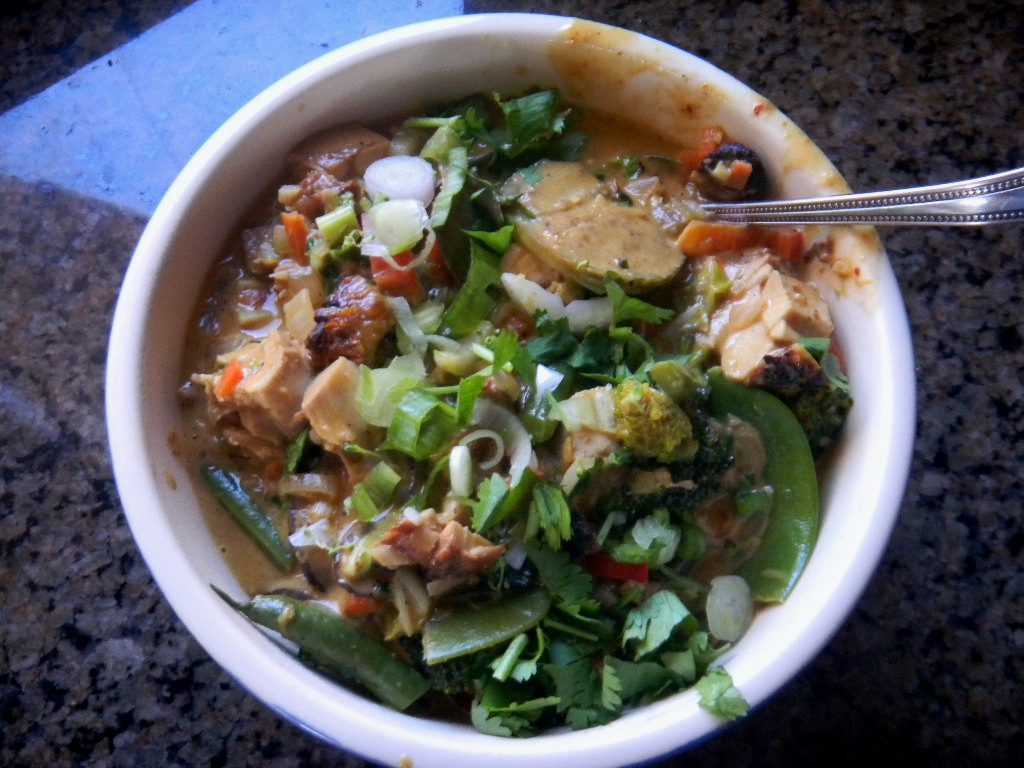 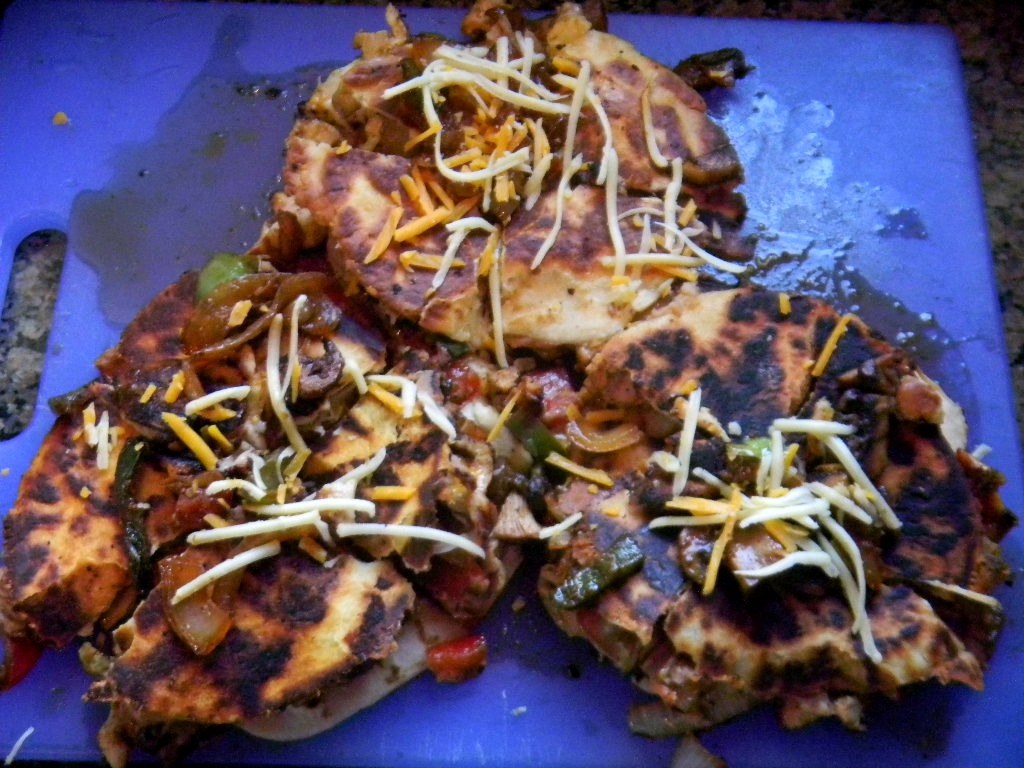 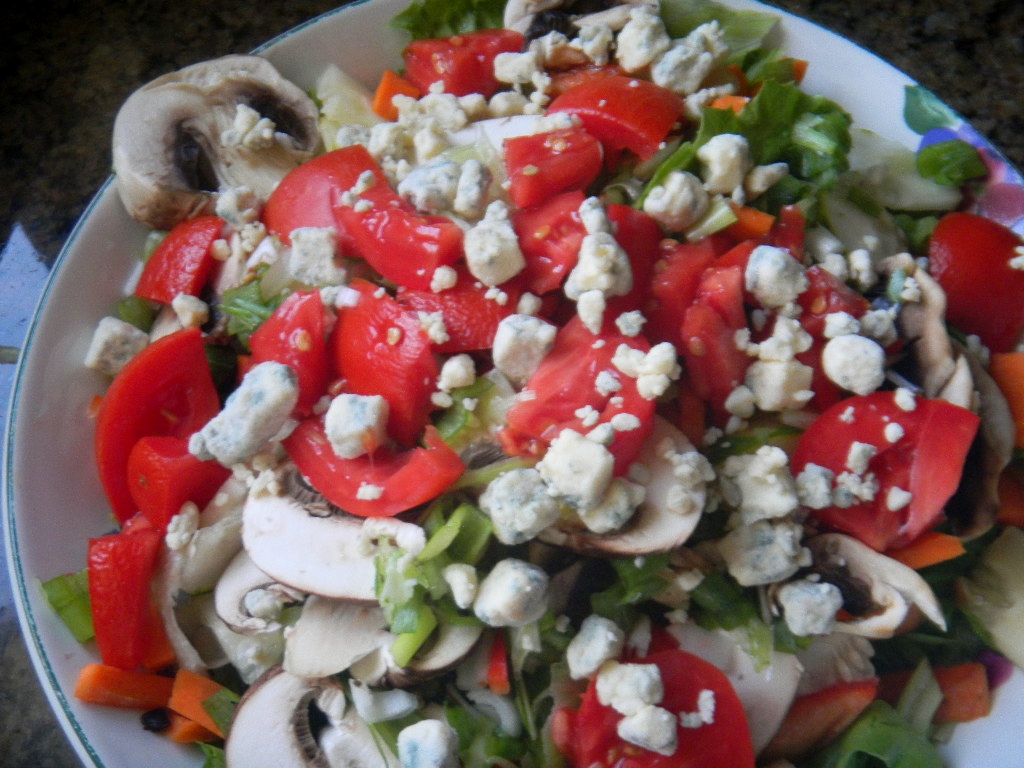 Great looking bake DA and Lucy!  If you don't like seeds I guess you would have to eat that fantastic looking curry all by itself :).

Crumb and crust look spot on and I'm sure this one was chock-full of flavor.

I think if you left your dough out too long to proof it would have started baking without the oven!

Very healthy and hearty,,,and tangy too with no sweetness to mellow it out,  The hot final proof really saved the day when it cam to sour.  Hope you had fun at KA Flour and got all stocked up again.  Safe travels and Lucy send her best to her East Cost Pack

bur in AZ it is way too hot to use it most of the time and, when it is cool enough, the Feds won't let is make a fire because of the supposed air polkution even though the air is 90% cleaner than it was in 1980 .  So you really don't need something you can never use!  So I don't make any hearth bread.

If you remove the /about/ it will work.

I was wondering why a bakery would want to learn how to bake hearth breads, until i s=w their web site.  They could use a few hearth and SD S breads in their line up of commercial yeast breads.